Gabba Gabba Hey! Or how everything is better when Listening to the Ramones

"Punks not a product, its zest for life"

Once more I find myself poured utterly into a project. Riffing on training ideas an Macgyver-ing myself any advantage I can scavenge. It all sounds very romantic, but it's mainly blood and sweat and dribble.. However, there are worse situations to be in than sitting on my favourite beach in the drizzle.

The following was written live from the trenches, as it were... 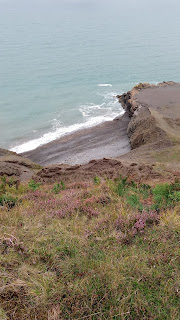 Once more I lounged below the roof of the Idiot Kings, watching the drizzle turn the grey beach into a riot of colour as the pebbles gloss and shine. For a moment it was like a Kevin Lowery painting. It's never a chore at Porth Howel, although getting out the car into drizzle was an exercise in will power. However, there was beautiful sun over Trefor, and it was dry in Pistyll. Yr Eifl was just toying with the clouds that's all. As I write this the birds shrill out and the drizzle clears. Hope springs eternal. 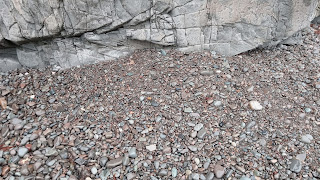 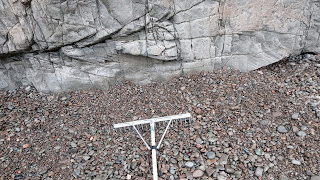 The rake works well on the smaller pebbles, but it's length (breadth?) means big pebbles can dislodge it from its path. A change in grip and some close work soon deals with this. The traverse is excavated, all is required now is the connies. 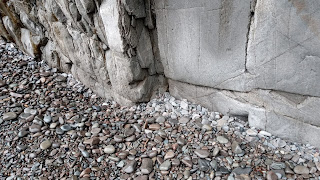 I was very close to packing it in, in fact I'd packed up and was just noseying around the other side of the bay which I'd yet to focus on. Walking back to the bag I saw the pebbles were starting to grey again.. Let's not jinx it, time for lunch. 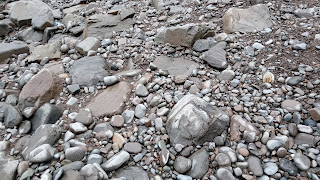 The drizzle returned. I packed it in. 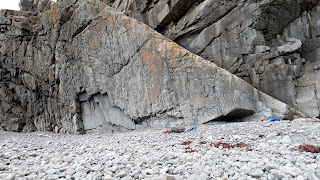 Next visit I returned rake in hand to be greeted by a lack of rain and unfortunately a lack of breeze.

My previous work with rake (my Macgyver-ing outside the box) seems to have stuck.

I still set about improving the crater around the lowest foothold, chuckling that by Christmas it would be 2 foot up the wall. The traverse project on the Wall of Something Dead is something I'd toyed with for years, always trying left to right. The moves through the alcove were nails and I never really got that far. It wasn't until earlier this year that I tried it right to left and the moves unlocked.

The subsequent burying of the footholds by the summer migration of the beach was something that I had initially reconciled myself to had niggle at me following success with the Tosheroon. Hence my purchase of the uber Rake. It was soon altered to my needs; chopped to fit better in a pad, and a rubber foot so it could be used as a walking pole /crutch.

This first dry visit back was a bit of an eye opener, as it all felt loads harder. Basically I'd spent the intervening months climbing on my fists, and I now had to remember how to use my fingers. It wasn't a complete waste though, as I was able to throw myself repeatedly at the crux and work out exactly what was required for success. 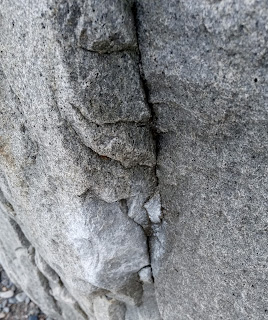 The traverse is about 23 hand moves long, with a jug one third in. Past this I've never really been able to Chalk up, so took my bag of at this shake point. Leaving the jug the moves get steadily more dynamic and powerful switching from crimps to pinches to fat slopey layaways. The key was positioning your body to enter the next move, and that meant foot work. Footholds required attention. 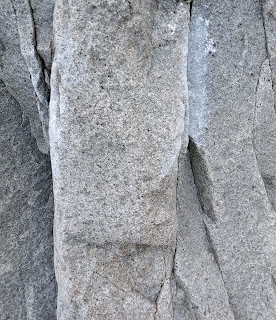 Brushing off the sand, Washing off the salt crystals, squeaking the hell out of them. Triaging their value, and marking the important ones, tactics and tricks, trying really hard.

Having exhausted my time there I trudged back to the car, past some walkers with a dog, who started barking excitedly. I commented that he must have loved the cows further up. The owner replied it was fine with livestock, it was that I was walking up the hill with a massive rake..

The following week and a half I bouldered lots at the wall, crimping and pulling and throwing myself around. Of course this hurt, and I overdid it, causing various old man issues. However, it did leave me feeling a bit more prepared. 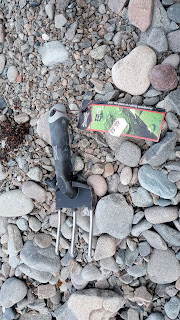 When the next session opportunity presented itself, I decided to instead take a small hand fork.. It was very effective, and could be hidden from canines. The opportunity was more driven by availability than conditions, as it was still unseasonably hot, and the tide was large and swiftly encroaching.

Confident that the actual traverse would be non tidal I set out to have a play, give my fingers a workout, and continue my footwork on its journey from pantomime horse to primo ballerina.

The waves were gently lapping over the Seaward wall as I did my little pilates session. The beating I'd given my body during the week was proving to have been positive as I flowed through my little crimpy  set pieces. Although after these preparations I still took 8 or 9 goes to latch the crux.

I changed the foot positions for an earlier hard bit on a whim and found it made it much less dropable. After this I had exhausted all my little bits of noodling prep, and it was time to set up the camera, stare at the sea for a bit, an then have a proper go.

Following that I had a bit of a digging session. I was feeling OK, and keen not to loiter too much at the jug. Rather than dragging my chalkbag to this point, I just put a little pile on the jug itself. Tadah!

Flushed with innovation I rubbed some into my trousers like the cool kids.

I'd deliberated over the name as most of the wall was Ramones themed, and I was initially keen on R.A.M.O.N.E.S. for the songs energy. In the end it was Milky Wimpshake's word smithery that won out. I'd also convinced myself that it would be 7A+, but no way I could have done that grade in these connies with this body. 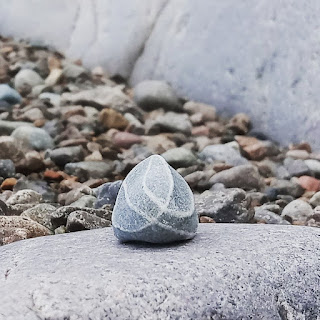