So at the beginning of the year I had set myself three goals; Short term to get my body injury free and in some shape to climb sustainably, Medium term to climb my Tosheroon project, and Long Term to climb my Marchlyn project.

Well... Getting injury free is going pretty well apart from myself spannering my ankle, as I'm identifying the root problems of my back and core issues (Weak Buttocks). Head knowledge wise this tick is almost in the bag, implementation may take longer.
Tosheroon has Identified itself as more of a Long term goal (it requires fitness), and the Marchlyn project may be easier (or harder) than I thought.

Last night I bit the bullet and decided to put my foot through some highly scientific testing. I walked up to the dam (no scooter as was too windy / silly with my ankle) and jolly well went bouldering. 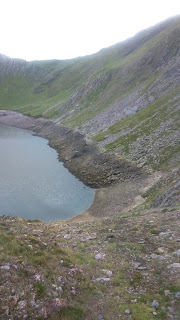 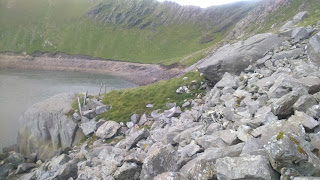 The boulder on the right is Livesey's Love Child, so called as I was reminded of some hideous slopey top out that Bransby was photoed on. The FA was done without a mat, and there was an awkward moment when my trousers velcroed to the lip. a couple of pads and a spotter would make it more nonchalant. 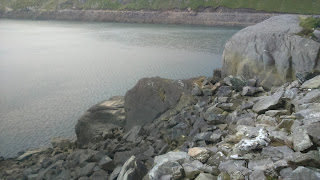 The lower 2 boulders are exposed in this piccy. I've not played on them yet as they either have weird landings or are under water most of the time.

It was great to be up here again, although it certainly exposed my fitness (especially the walk in). Erodeo felt especially hard for F6Aish and I ended up donning my solutions in an effort to climb with less thrashing (the muira heels weren't cutting it). This was another breakthrough as I couldn't wear tight shoes previously. Sufficiently warmed up I spent some time dissecting the moves from my designated project start into Tumbleweed. Its great to work things went you're really weak as its much less likely for you to get distracted with interesting technicality as you cant do it. Pulling, lunging and thrashing I eradicated the impossible and extracted the easiest path between the two. Basically 4 big thuggish moves into the erodeo starting holds. The most technical it got was a toe hook ( another victory as it was my left foot). So get back to fitness and there it goes. 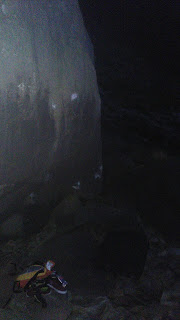 It was a bit dark when I finished, and getting off of Elidir on to the tarmac was a little sketchy, especially when the wind gusted.

So goals wise; What I didn't factor in was my family life. The addition of one extra shouldn'y be a biggy as there's three already, but I'd forgotten the extra issues of babies, and how a few sleepless nights could impact on the rest of the family dynamic, as well as the extra restriction of my time.

Fitness will have to weight, but posture correction, and strength gains can be slotted in, turning the order of my goals topsy turvy. I'm still confident to tick one or two out of the three by new year.

Yet again the blogs been pretty silent. The reasons for this are twofold. Firstly its the summer holidays and I have 4 kids. Secondly 6 weeks ago to the day I fubar-ed my ankle with an ill judged dyno while boulder setting at work. I walked it off, and as I could weight bear and still climb a ladder with it I manned up like a neanderthal, strapped it, shoved an ice pack down my sock, and set the remaining 16 blocs and went home. It continued to a) look funny, and b) hurt A LOT when I twisted it. However, I could walk sans limp, proprioception wasn't impaired, and there appeared to be nothing impinged.

So Its still not right, but on the bright side it almost looks the same as the right one now, and while I still can't get in a tight rock shoe, ledge shuffling in something baggy should be on the cards.

The adventure never stops though, and this time the kids are being dragged along. 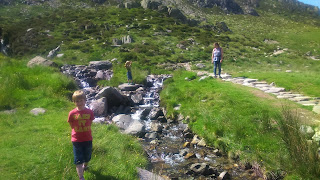 The circumnavigation of Llyn Idwal has finally been achieved without nakedness 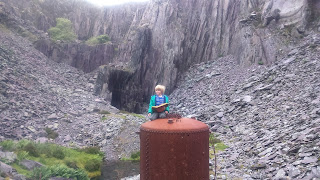 Having survived the death scree, Ethan mounted the boiler and contemplated the flooded tunnel adventure that awaited.. 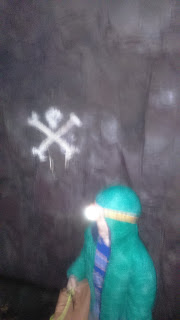 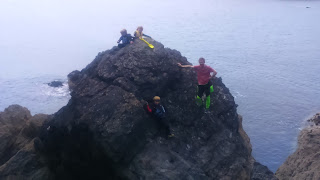 Coasteering. Never be without your spade. 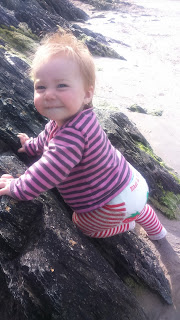 Seren rubbing in the fact that she can climb. 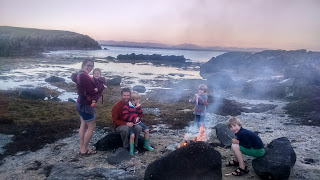 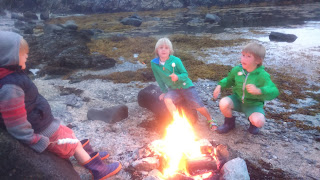 The boys learning appropriate use of lighter fluid.

I.N.S.P.R.E will return when I can at least attempt something.