Giveaway Project of the Month - August

Big Trad one this month, and a good appetite whetter for the arrival of Llanberis slate.
Whilst route checking for the aforementioned guide, I happened to spend rather a lot of time and 160m of static on the back wall of Twll Mawr.
This mighty crucible of adventure was pioneered by Joe Brown himself.
Any hoo, here's a snap shot: 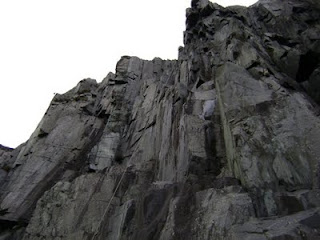 My abb rope cuts across the steps of the Razors edge, the grey slab of the true finish is to the far left, and Taith Mawr skips beneath the overhangs in the top right. You may have noticed the overhanging dolerite arete just left of centre.. 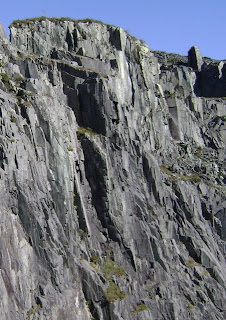 Here sweeping up the centre of the pic... 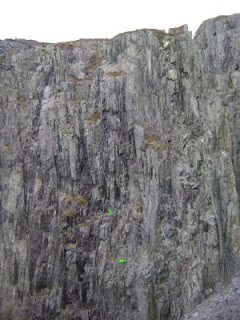 The green arrows are bolt belays placed by myself as means of assisting escape or rescue (and preserving my neck while exploring on abb). They rather lend themselves to a 3 pitches and a scramble direct up the back wall. Pitch one would seem possible between Bushmaster and Razors Edge. Pitch two is a 4c formality. Pitch three would be amazing... and appears to have sufficent weakenesses to allow the climbing (if not my belays) to be trad and bolt free.


I have held onto this rather, but the truth is its out of my league. try not to soil it. 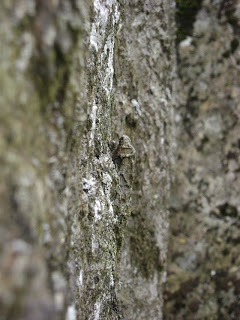 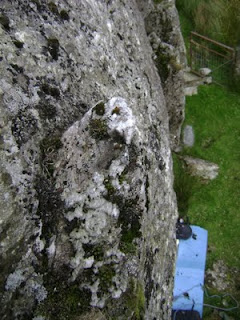 Its highball, but its also quite hard which was the main reason its holding out so long. That and its a bit of a pain to get to, hence I haven't visited for about 6 years.

How did I compare to my younger self?

Birthday highpoint: 5 hand moves. Crucially past all the eng6 moves and only 4 eng5 to the easy ground above.

Young skin only took 3 goes to get to this point too.. 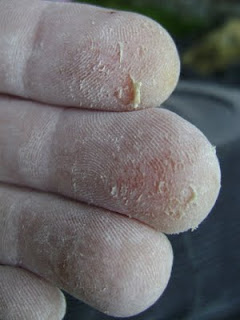 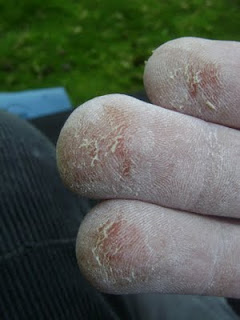 However, that was probably my weakness and inaccuracy. This time I got over 10 proper goes out the old pads. The Key advantage to my older frame is a proper core which just made things feel Easier.

I should have topped it that day, but suprise at finding myself so high, the solitary pad, and a mindblank on what my feet should be doing thwarted me.

Once the finger pads return and I can Find a spotter willing to drag an extra crashpad Its going to go down!

Its alright this getting older business.

Saturday I got out climbing with Wolf, the joys of August meaning
- It was my birthday at some point, so I was allowed more climbing time
- The aforementioned birthday meant I had some new rock shoes to christen
- It was August, so only Tremadog was dry.

Weeks of not doing much outside, and my wide week making me feel so out of shape I decided to give myself a slap and we stormed off to Zukator buttress to try the Zukator-Grasper connection. I don't know if it was the new boots or just the fatherhood drive kicking in, but I hadn't led E3 at Tremadog before, in fact my only clean E2 was Vector. However, I thought I should stop ducking and diving and take it on the chin.

It was similar on my first grit E3, Smear test at the roaches. Success came when I stopped mucking about and accepted the fall. I seriously thought it was too hard, but my mate had a camera, so I committed to the possibility of airtime and just flipping did it. No fall. In the bag. Done.

History had found me on the Zukator-Grasper connection before. Back in 2004, I was out with a couple I knew, the lad was pretty handy and he led the 1st Zukator pitch. I remember thinking this was quite hard and quite bold, I opted to lead the Grasper 2nd pitch and subsequently fell off. All in all I was Quite knackered, and My intimidation by Tremadog extremes was untarnished. On the way home the couple had an almighty barney and I was Left in the car With the Young lady... The Gentleman off to solo at the cromlech. I took her to the quarries for a route to distract her, and Promptly cratered and got airlifted off.

So Yes this route seemed a good place to get some grit and take on some character.
It went okay actually, starting proper technical, but with gear. Then followed some burl, less gear, then a rest. Gear.
The hard bits above made me think. As did the lack of gear.
Back to the Smear Test. Accepting what you can't change, accepting the consequences of your own actions. Take the step and move.
I didn't remember much of the actual climbing from before, and now its still a mash of hold positions and tight focus on gear slots. But I succeeded. My First Tremadog E3 pitch. I didn't fall off seconding the Grasper pitch either.

Thought it wise to skip the quarries afterward tho'
Posted by HoseyB at 13:06 No comments:

Its Gone to the Printers!
Available mid September - Slate Season!!!
Posted by HoseyB at 09:47 No comments: