I had one more attempt at trying hard since last time down at Skadoosh.  I'm discovering it takes a while to warm into the brutality,  I think when it's actually seeming feasible I'll have to give it more than an hour and a half. Nevertheless,  come the 80 minute Mark, I'd held two new positions and identified a significant limiting factor; namely hamstrings. 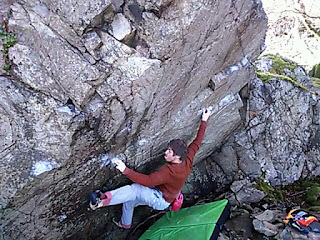 My foot is supposed to end up next to my left hand...

In other news,  a minor Pebble Helm reunion was organised at Porth Ysgo. #theonlydryplaceinwales.  AndyF and I and an army of Lancs descended on Saturday,  and we had fun. 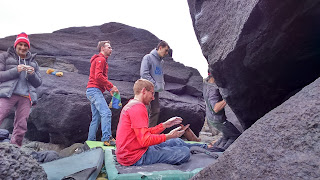 Last time I was at Ysgowas at the NWBG Book Launch last November,  where I managed to lose a toenail establishing a new stander called Squishy.  This time I bruised my bum endeavouring to repeat it ( here's the successful video)

I then tricked the assembled wads into giving it a sit start so it wouldn't get ignored.  It was dispatched by keen and strong youth Callum Hamilton, but I was on Brian Spray at the time, so here's AndyF on it instead. 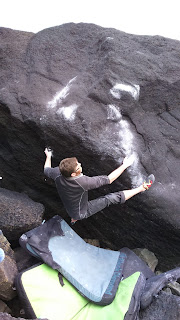 Starts with left hand on a sidepull,  and right just above where Andy has his right heel. Barry Kershaw managed the second acsent ( despite being somewhat shorter than Callum)  and 7B was the hives concensus on the grade.
Good Times.
Keep Flailing!