Well it rained a lot. And the family got Covid (all except me bizarrely)

To be Frank, my motivation took a bit of a nose dive, I went back to Porth Howel, which was nice.. 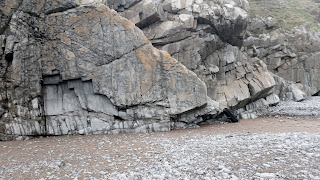 The autumn storms had brought winter pebble levels. I was pleased to confirm that it didn't really make Barcode Punk easier, and I got to repeat What a Difference a Wave Makes, which again was nice.

I also followed up a hunch and checked the prow project at the old Trefor pier. 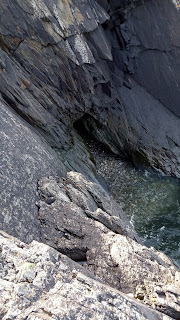 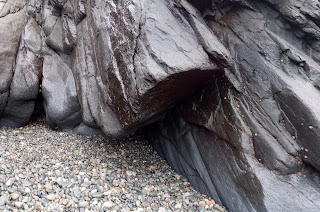 So the big prow project is back on... There is a niggle in the back of my brain, and at this point I think the seeds of discontent were sewn.

I've had a great year. Properly Stonking. The motivational boost provided by the new bouldering guide has meant that I've ticked a humongous amount of long term projects this year.

But there is still so much to do, and the wave of success has to reach the beach at some point. Fear of Failure has been a long-term foe, one I have repeatedly defeated only for it to jet off like The Claw. 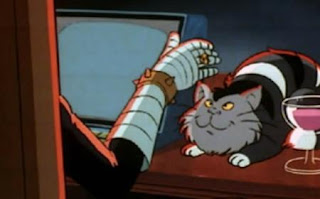 Throw in some external stress, and it's quickly becoming a bit black.

Feeling burnt out is OK, feeling incapable and vulnerable is OK. Withdrawing a bit is not bad... But I'll be damned if I relinquish control.

So to try and break this low patch I went back to exploring.

A bit of Google Swooping* found me a wood with a cliff in it and an adjacent public footpath.
*flying round Google Earth with help from Geograph.Org.Uk 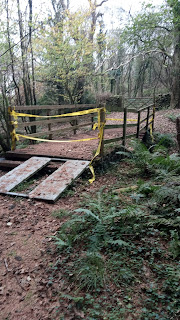 Path was closed due to an exciting bridge (well I enjoyed it).
Turns out the interesting path wasn't exactly public.. 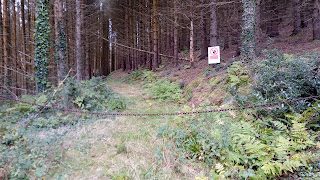 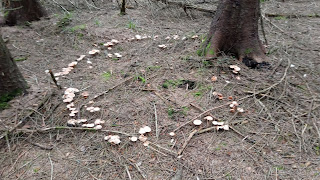 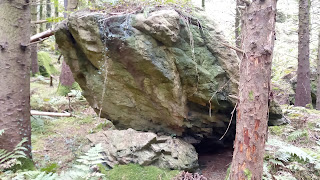 Slightly too small boulder.
There was a massive and inaccessible cliff in the wood, but by that point I'd had enough, and diverted myself along a contour to check out a dark roof in a cwm. 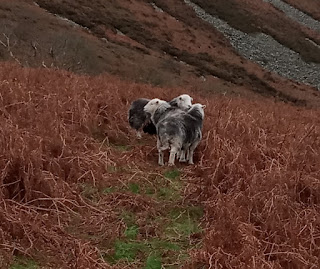 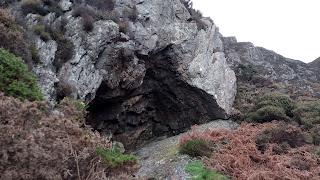 Turned out to be a slatey hole..
All in all a tad disappointing. I was lucky enough to get an actually sunny day, but with little psyche I diverted to more Google Swooping and a hunt for Tone's Golden Boulder. I found it, was underwhelmed, and quested on to see these reprobates: 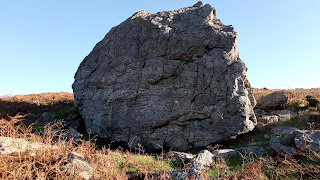 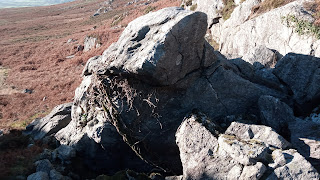 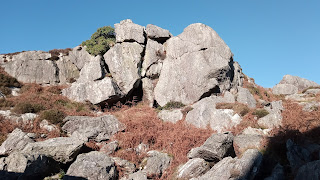 Not rubbish, but not enough to pull me out of my slump.
Driven by a unhelpful desire to add to the forthcoming Nwb3.2 idid a last bit of Google Swooping and decided to check out Carreg Lefain. I'd seen on ukc that the parking described in the Llyn guide was no longer welcomed by the land owner. Fortunately, the excellent work on the Mynydd Nefyn footpath network had meant easy access via a carpark just south of the crag. 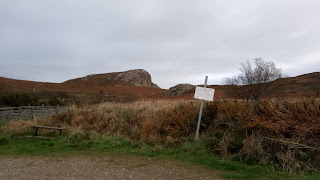 The crag itself looked ace, almost tempting me to dust off my rack and revisit in the Spring ; 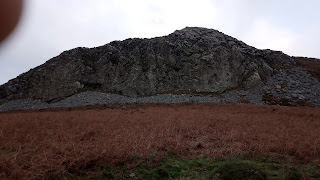 Slight digital photobomb.. A couple of boulder bits at the bottom, but no pot of gold. 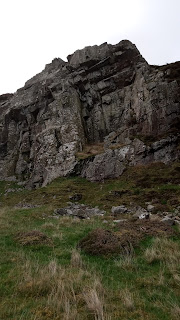 In nearby mynydd nefyn quarry I found a cool looking crack.. 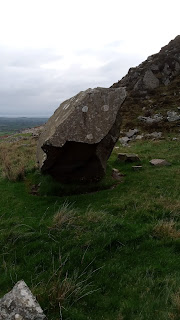 And a too small but perfectly formed microgranite boulder.
So yet another disappointing ramble, at this point I swore off further Llyn exploration.. 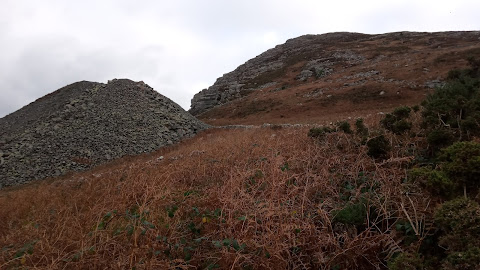 (though I might come back for Gwylwyr quarry).
What finally snapped me out of the doldrums was an indoor climbing session with my wife. I hadn't lead climbed apart for when I was setting for months, and it was fun just trying stuff and getting pumped.
It's OK to fail if you're having fun.
Find your own fun, this may not be the same as other people's fun.
That's OK too (within the usual societal boundaries ofc).
Thus I found myself going to an old venue, in an unfashionable out of the way spot. I'd told myself that I'd try some of the easy stuff I'd scoped out. However, I soon got sucked into old projects.
So I'm now looking forward to trying, Failing and maybe succeeding on random things that I find fun. I'm putting aside tick lists for a bit (save some for next year).
I hope the rest of the winter will be a bit drier, but I won't base my happiness on it.
Finally I probably wouldn't have exited this wallow quite so speedily without the support and heckling of my wife and kids, and the shadowy network of professional banter merchants known as the Pebble Helms (cheers lads).
Keep me posted on any virgin offwidth sightings..
I'll try not to leave it so long between blogs, but there's always the Instagram.
Forward Always
Posted by HoseyB at 15:18