I've not been out much lately due to weather, work and family, so was sorely in need of a Big Grin outing; one of those expeditions that results in more than wet feet and disappointment. Following my treasure hunt with Ethan, I was keen to return to the wilds and look into the places I hadn't written off last time. Bit of a high risk strategy as there was low wow factor last time (although lots of good Dad time etc..)
The wilds in question were the surrounds of Moel Meirch, hostile lumps of bog and bush. However, they were fairly unexplored, and Dr Crook found them mentioned in a 1920's climbing guide, what could go wrong? 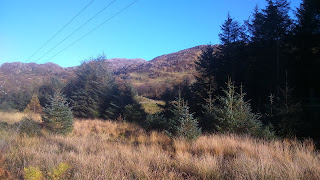 The View from the car abandoning place.. 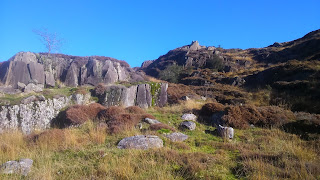 Choosing to veer away from the path and safety of Afon Llynedno, I started coming across lumps of good, if diminutive, rock.I sought out the lumps in turn, and above the central lump in the distance was this: 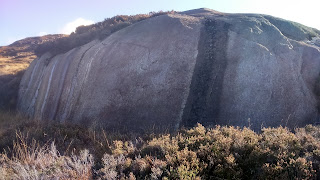 A humongous lump of nice slab! Just over 4m high, this long bluff had loads of potential. The downpours of the previous days had merely divided it into concise sections, giving clearer lines.
I set to it and managed 2 and a bit blocs, contained in the video below.

The first is Boulder Dismorphia somewhere on the cusp of 6A and took me too long to do as it felt a lot higher than it was due to the gently sloping top out. It goes up a nose of sorts into a droopy overlap, easy enough to start, and also easy to chicken out off left for the faint of heart.
The second was Grin Harvest; a low to mid 6 stating under an obvious edge/flake thing. Tricky to start as the feet are weird. The vid is the second accent, as I pressed photo rather than vid on my phone first time round...
The object of my failure is probably not too hard (especially if your a bit taller) but i was starting to lose skin and patience.

I'm quite keen to come back here, this was the first block I came too after a longish walk, however the rock was ace, and looking beyond, may have been the first of many.. 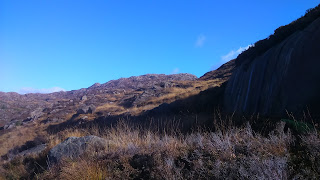 I then wandered circumstantially to see if I missed something on the way up, and espied Graig Wen: Could be a new area to open up, let me know if you're keen (bring wellies)