My beautiful wife announced that I haven't had a weekend off in a while, and suggested I organised something. As luck would have it Fatneck and O-Dog were one their way over the very next weekend for a Friday / Saturday affair; the game was Afoot.

First I had to escape work on Friday, this was sidestepped by two thirty, and Aberdesach was passed at great speed. The drizzle of the mountains gave way to the sunshine of the Lleyn.

Day one was Porth Ty Mawr. this was a Giveaway of sorts back in 2009 that Fatneck picked up on, and O-dog sniffed out independently. Too far out for me in the 'three kids under two' era, but the boys have had a great time developing stuff here. 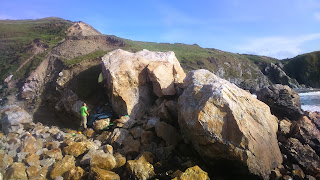 The landings are typical Lleyn, however the rock are rather nice quartzite, think blocky solid breakwater quarry rather than snappy holyhead mountain. The friction is quite isatis, although the slightest moisture and its slippy yuk. I climbed a few newbies, the sunny wall right of the arete on the block the boys are soaring on above, and a punchy 6C on the block to the right. 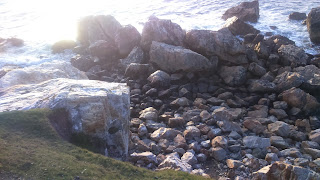 I also did the roof centre of shot which involved committing to a heel toe lock on my bad ankle. Its all progress and although its not completely better it is functional and usable. To finish off a brill day, Fatneck even landed a Sea Bass!

The next day We descended on my home turf; : Porth Howel. Literally Descending as its a fair plod down hill to the beach, the boys beat me to it: The white rib centre frame is the ramp you slither down to the beach, its also the main highball wall 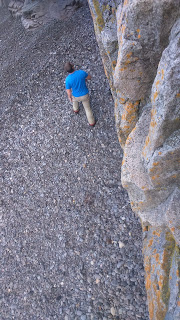 Fatneck scoping out the highballs as I descend...

This would be the first time I'd climb here with anybody else, so I was keen for their thoughts. I'd dug up an old topo and we set about reticking everything, with O-Dog keen as ever, adding sit starts all over the place. I also managed to scratch an itch and complete a line that had me in retreat last time due to wetness. 53rd and 3rd is a 6A!! starting at the pillar  right of Fatneck's head (below)and goes direct with a lot of worrying at the top. Fatneck filmed it so It may appear later. Quite pleased as along with every highball on this wall they were done ground up, with no massive lobs either. I chose this Ramones track as it describes the depths you sink to when feeding an addiction.... 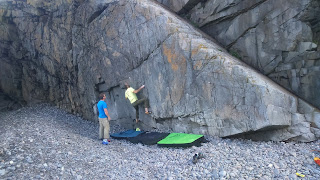 O-Dog on the start to The Wall of Something Dead 6A! 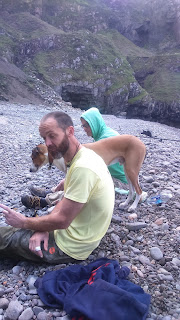 Mid-day Tab Break for the boys 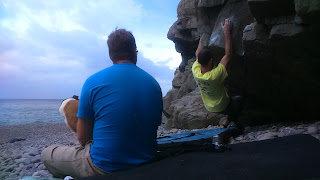 O-Dog accepting the challenge of the Giveaway project of the month from this time two years ago.

Fatneck's verdict was the succinct "It woz Boss" and Owen was keen for the return to his new project.

Its never going to boast big numbers as it has too many holds, but lovers of granite crimps and slopers may like to check it out.

We caught the rain as we trudged back up the killer hill, but though damp I was we happy to have tried hard for two days in a row, and finally climb with some company too! I'm aching tonight though.

Labels: Better Half, Bouldering, getting out, happyness, highball, Obsession


So a mixture of summer holiday family time and the small matter of a bust ankle has caused unhelpful weakness to pervade my being. What causes more concern is that the imminent arrival of  the new bouldering guide has stirred feelings of loss...

I have nothing new to work on dammit! admittedly I did give away a whole load of stuff, Cae Dafydd, stuff in Aberglaslyn, all being worked now by local devotees.

In an effort to produce some psyche and lift the malaise, I had a two venue day yesterday. Firstly I went to the Caseg boulder for the first time. I thought that visiting what is widely though to be the finest 6C in Wales will help me get my own forays into perspective. The Caseg Groove was very useful to me, It expose large gaps in my game (open handed strength, core, power endurance) and I could see why it was admired; lovely position, good rock texture, just enough features to work. I did think it was a tad morpho though, and knowing the first ascentionist was somewhat taller than myself cushioned the blow that I couldn't get more than 1.5 moves in (for 40mins).

Following this I visited James' Boulder, this was due to there being a hard project there still to do, and being fairly minimalist, I knew I could compare today's progress to previous attempts.

First up was repeating the Filling to compare to Caseg Groove:

While very enjoyable, the venue lacked the aesthetics of Afon Caseg, and is probably 6B+ rather than 6C, it does suit me more than CG, but still. This would make James sit down 6A+/B

The Skdoosh project felt very uninspiring after Caseg, being neither stand nor sit, and very brutal in execution. I'm nowhere near, but managed a 1 second of controlled hanging on the starting holds.
Its a start.

The patio is one of the first I produced and is a bit ropey, If I can be bothered I may give it a make over and try to make the project more of a sitter...