Open Project of the Month - June

Almost didn't make it this month, as I had a particularly special chappie in mind, and was waiting for the stars to align.... only for the good weather to come to an end. However, a window of opportunity opened today and another Gem was visited.
This month is another criminally neglected past Giveaway, that I have chosen to take on myself until the rightful owner takes up the gauntlet. Okay, my directions may have been a little vague, and info sparse, but I may have been rushing that month.
Usual approach to Dyffryn Mymbyr; first layby after the chicane travelling from Pen y Grwyd to Capel, over the road and 5 bar gate, follow the fence up to the wall. Now over the wall and follow it to the right until this appears: 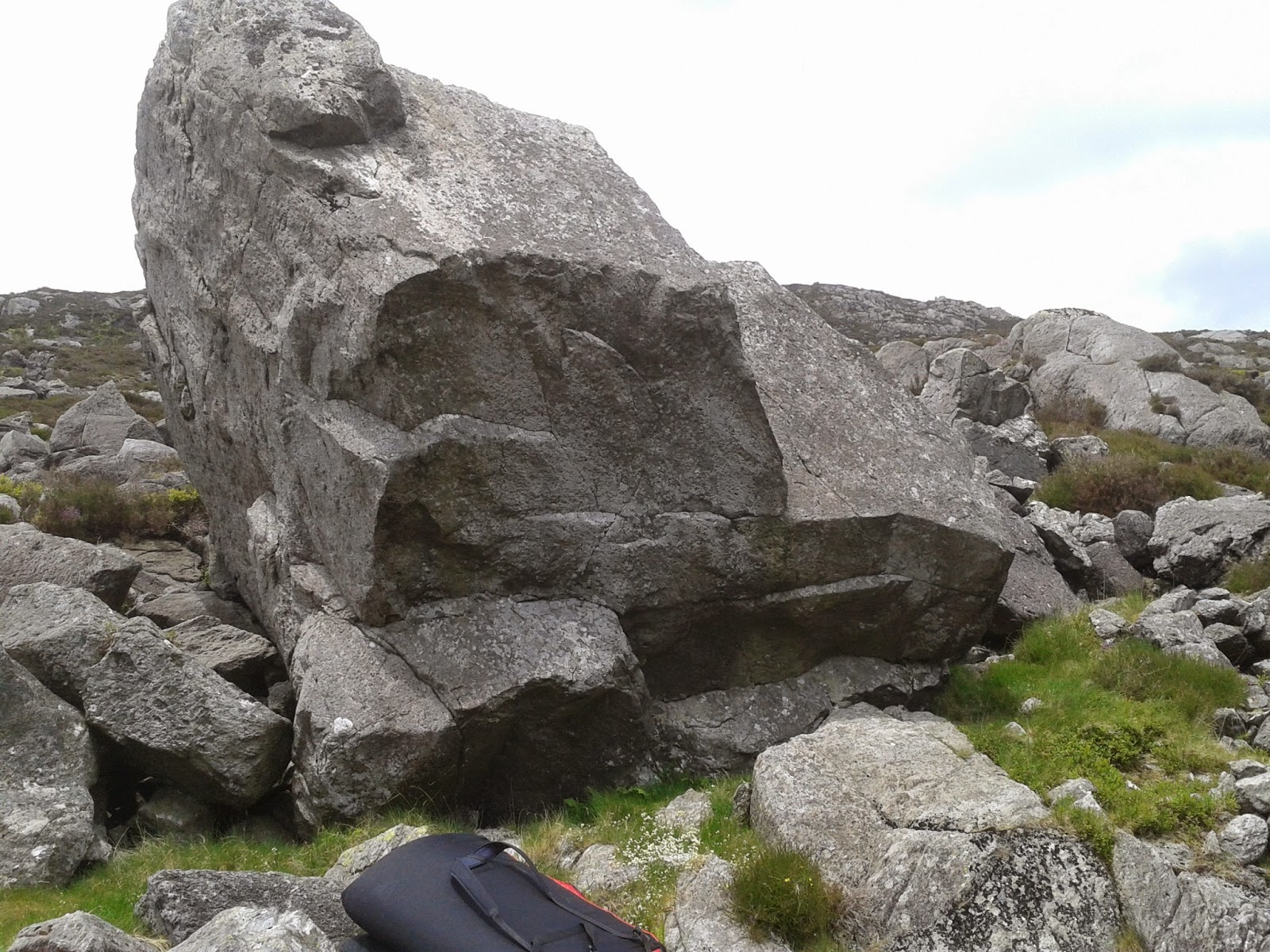 This is the Cube. The photo is a little tilted back and its more like this: 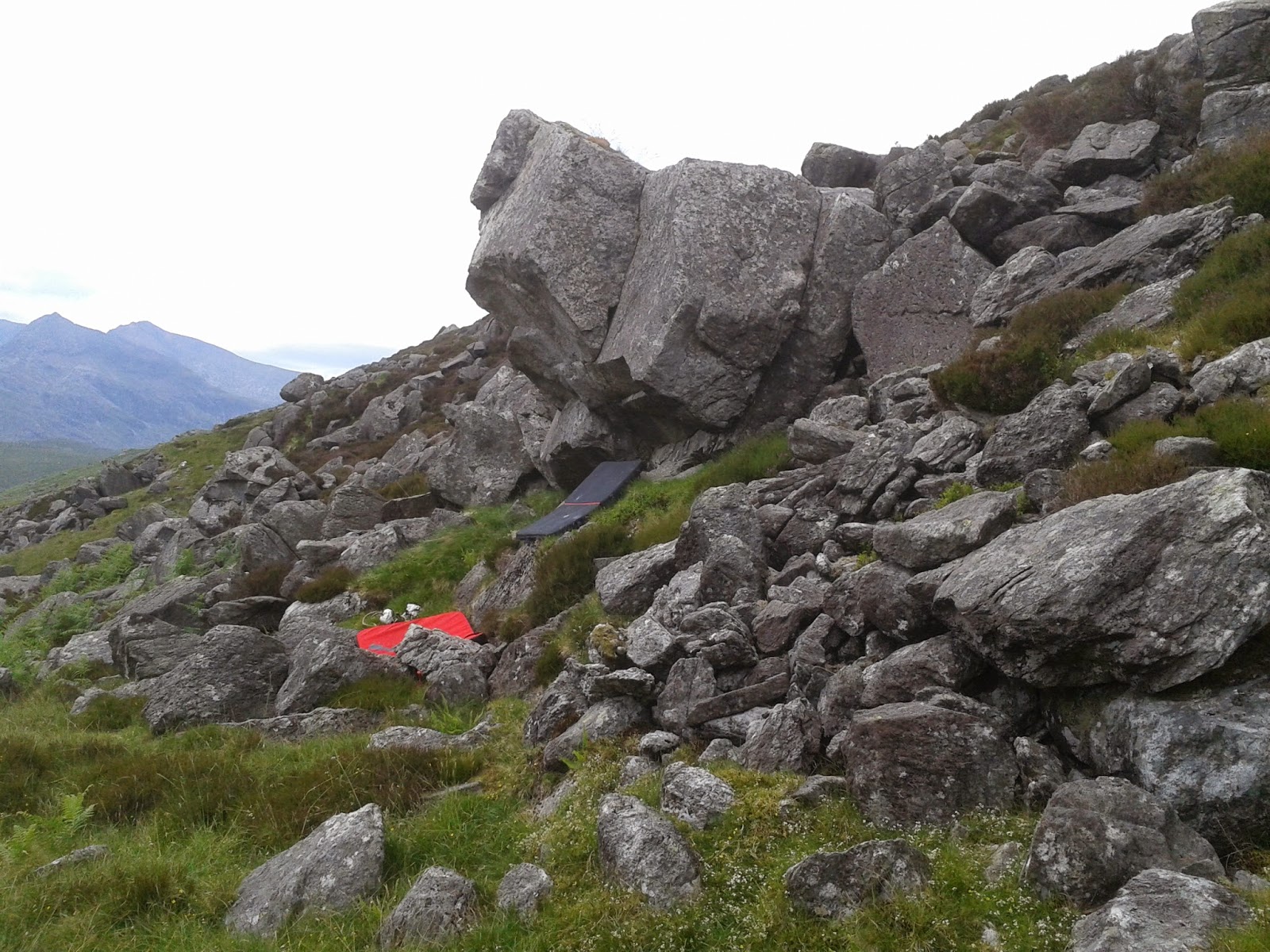 Now the issues with the Cube are: 1) its quite big and technical, and 2) the landing is a leeetle slopey and many of the central lines require a chute and pit approach to matting. the exception being this arête: 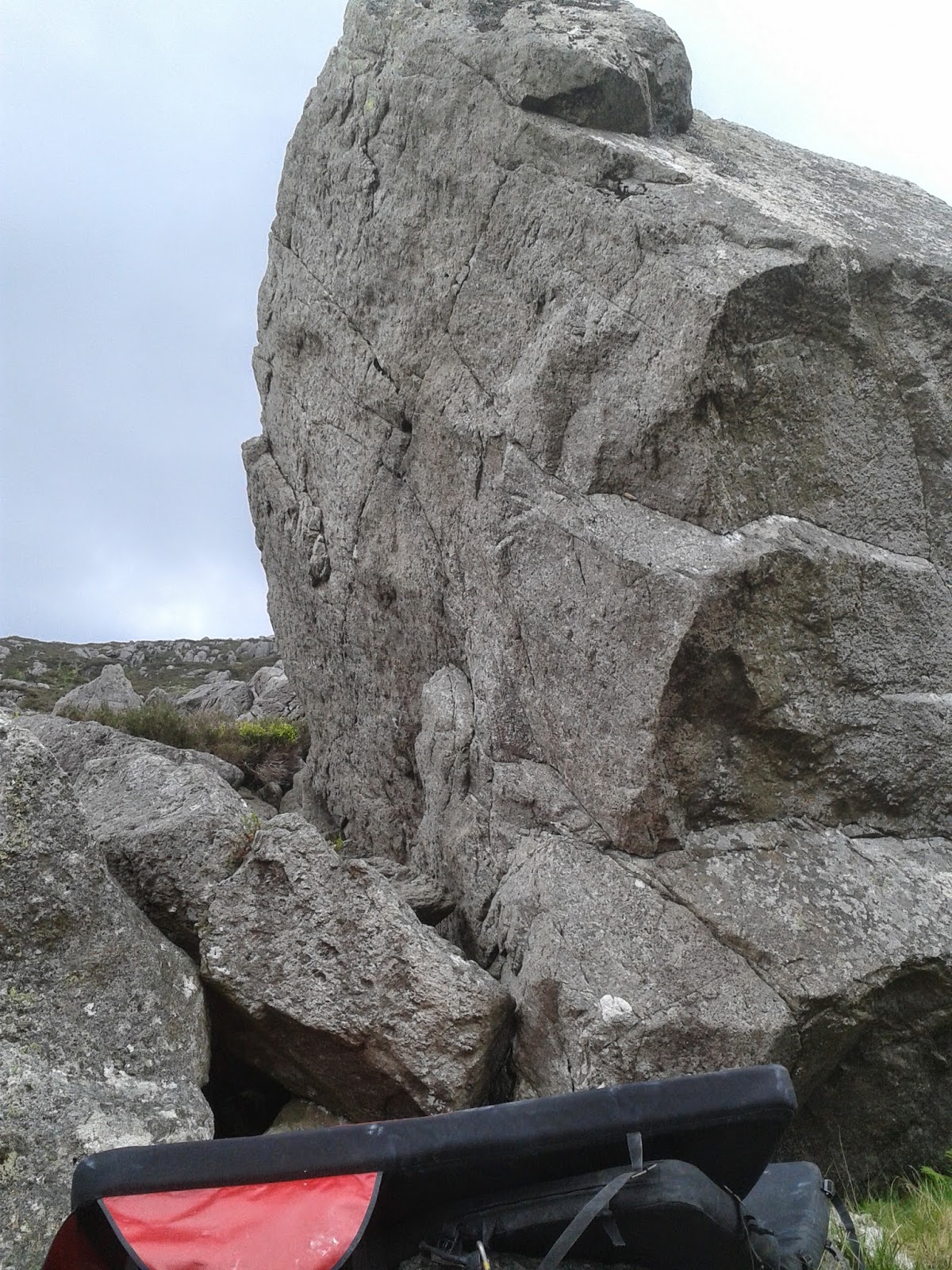 Although this is more of a stepped or tiered matting situation.
Basically it requires a team approach to mat acquisition and a bit of pushing and shoving.
As I was on my lonesome this visit, I concentrated on getting the groove line done and playing on the other starts. Thankfully the groove was fall free, however, I successfully tested the chute while playing on the central cube arête line.

After succeeding on the groove I repeated it for a vid. Its a bit long but will give you the opportunity to take the piss a bit..

I think for a good play 6 mats divided between 3 players would work well.
Enjoy
Posted by HoseyB at 11:27 No comments:

Thoughts on Soloing, and how far someone will drag a Mat?

It was a glorious day today, and I was priveliged to be allowed to put Fatherhood aside and go and enjoy myself. I had first thought to get in Twll Mawr, but with Tarzan filming, I may have caused issues. I then got psyched to do a classic and get a little boldness training. However, all my climbing partners seemed otherwise engaged. No matter, I thought. Why not have a solo day. I had been keen on doing Zeta, or Stairway to Heaven if a partner had materialized, so I decided on Western Slabs / Slow Ledge Climb as a good combo of classics I hadn't done.
I haven't racked up much real rock time this year, but felt at peace about the route choices, having a good margin of grades in hand. This opinion changed on the crux of the first pitch (4b). Looking back this may have been due to; someones lower off gear being left in place just below me, holds being a bit smeggy / polished, soloing onsight, carrying a (small)rucksack, or just being out of practice.
However, something must of clicked as I pushed on and got to the next pitch. This was a bit more straightforward and my footwork felt a lot more confident and stable.
I was also aware that I couldn't make a mistake. Yes I had plenty of grades in hand, but with a rope, gear (or not - I'm not sure that's the point) and most importantly a partner climbing is so much easier. Mistakes may be painful or even life threatening, but not guaranteeing certain death. At least not the things I tend to play on nowadays.
On the third pitch I jibbed out the crux by traversing around the rib and using the holds round the back, I just didn't see the justification in such risk. It may be a good route, but polished and is my life worth a VS?
On top of the nose I thought about bailing, but the description of Slow Ledge seemed much more my territory, and so it was, some vegetation (negotiable) hard bits with positive holds, and due to rougher rock, no slippy polish!
I may have left my soloing days behind me after today I think. My late 20's in the quarries were punctuated with some pretty full on outings; Opening Gambit, Buffer in a Crackhouse (onsight), even onsight new route solo's like If you Kill People... and the Green Flash Challenge. But leaving my 30's what have I to gain? The experience brings less and the cost is higher, certainly to my family.
I think this is why I like highballs. Risk of injury without the certainty of death is a more palatable tipple, and I can push close to the limit without having to line up a surrogate dad for the boys.

Topping out on the Mot, I contemplated the universe, and all the lovely rock. There's loads up here including some really cool looking boulder size bits: 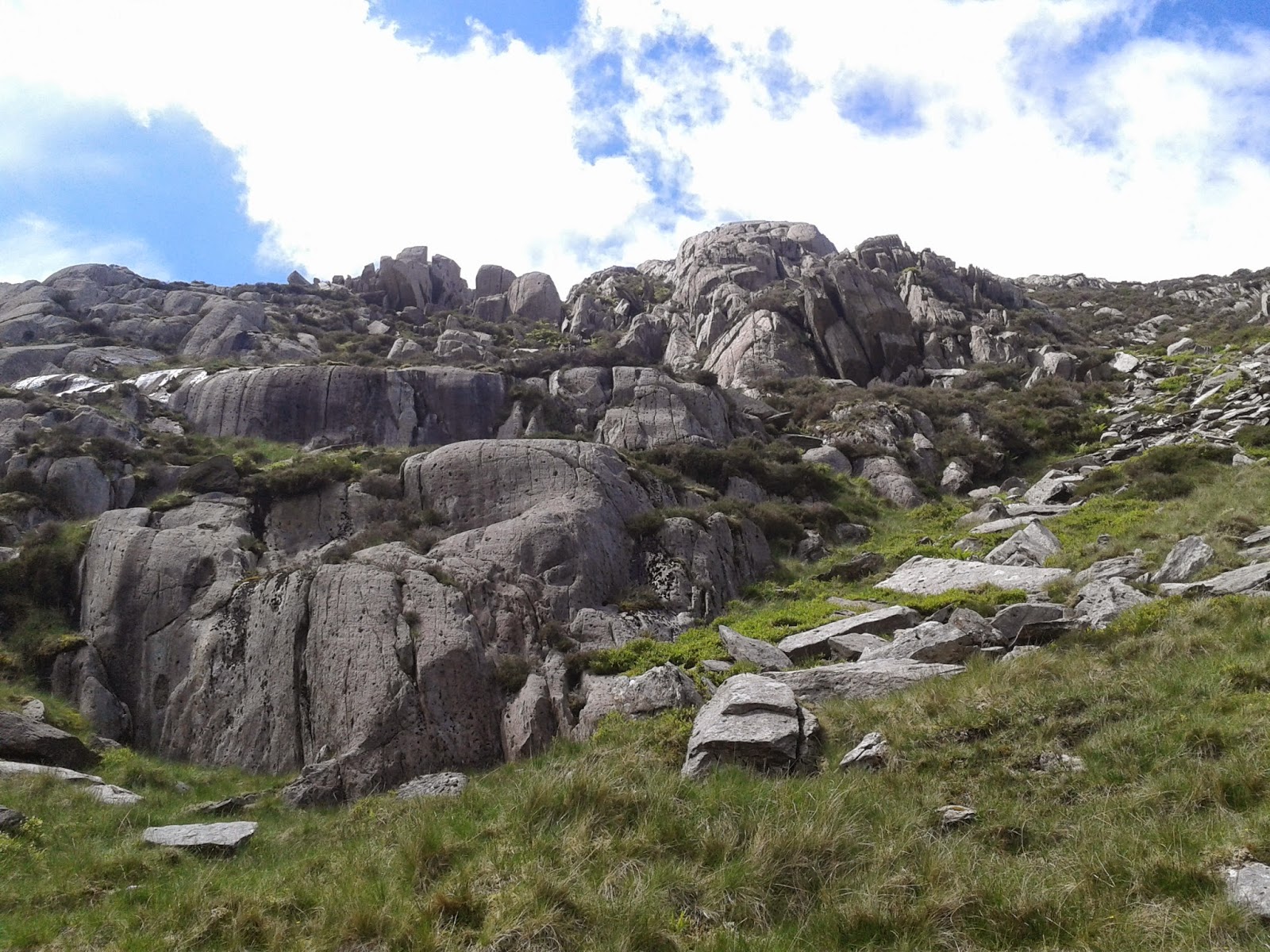 Overhanging widness in the background... 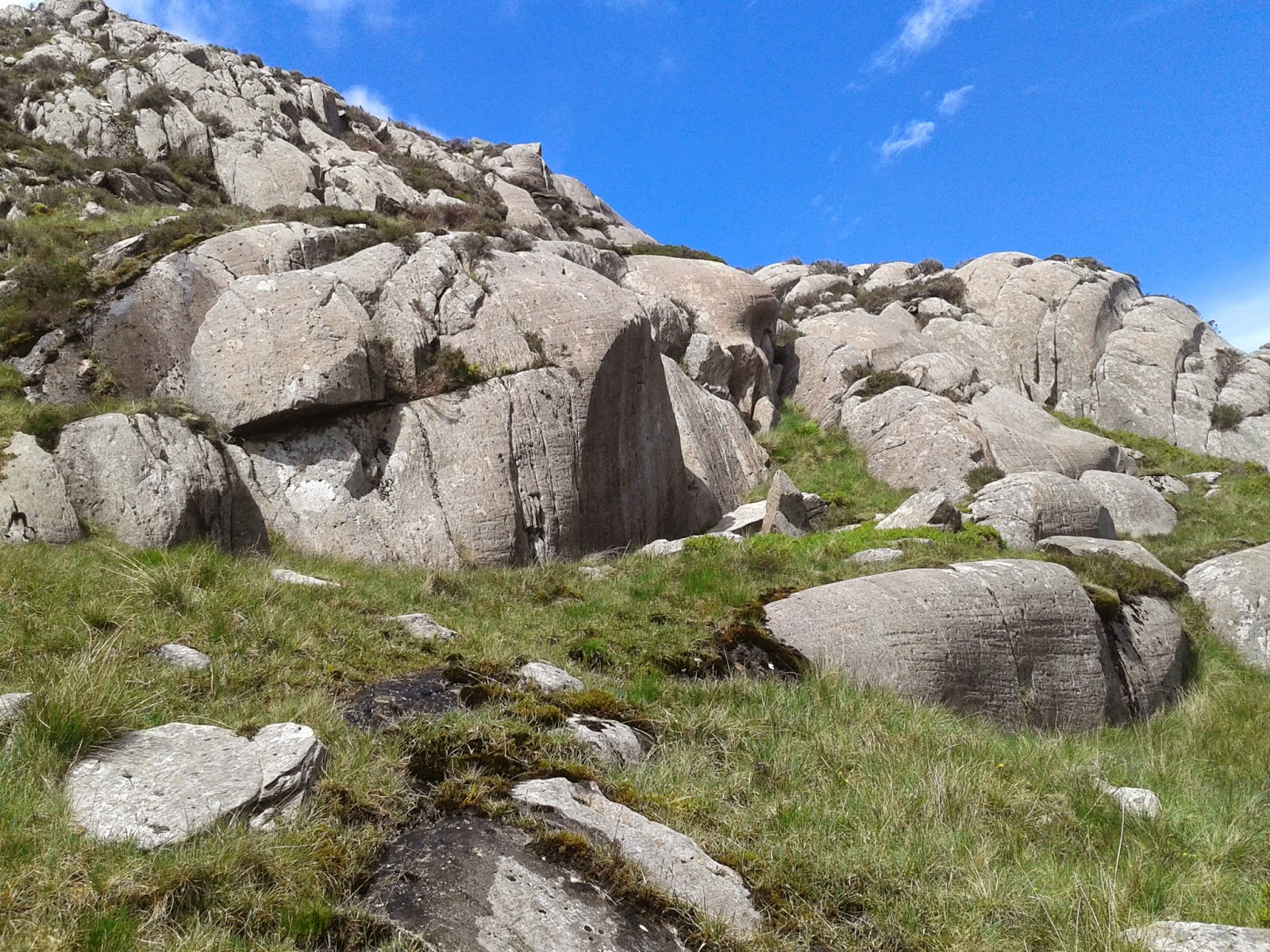 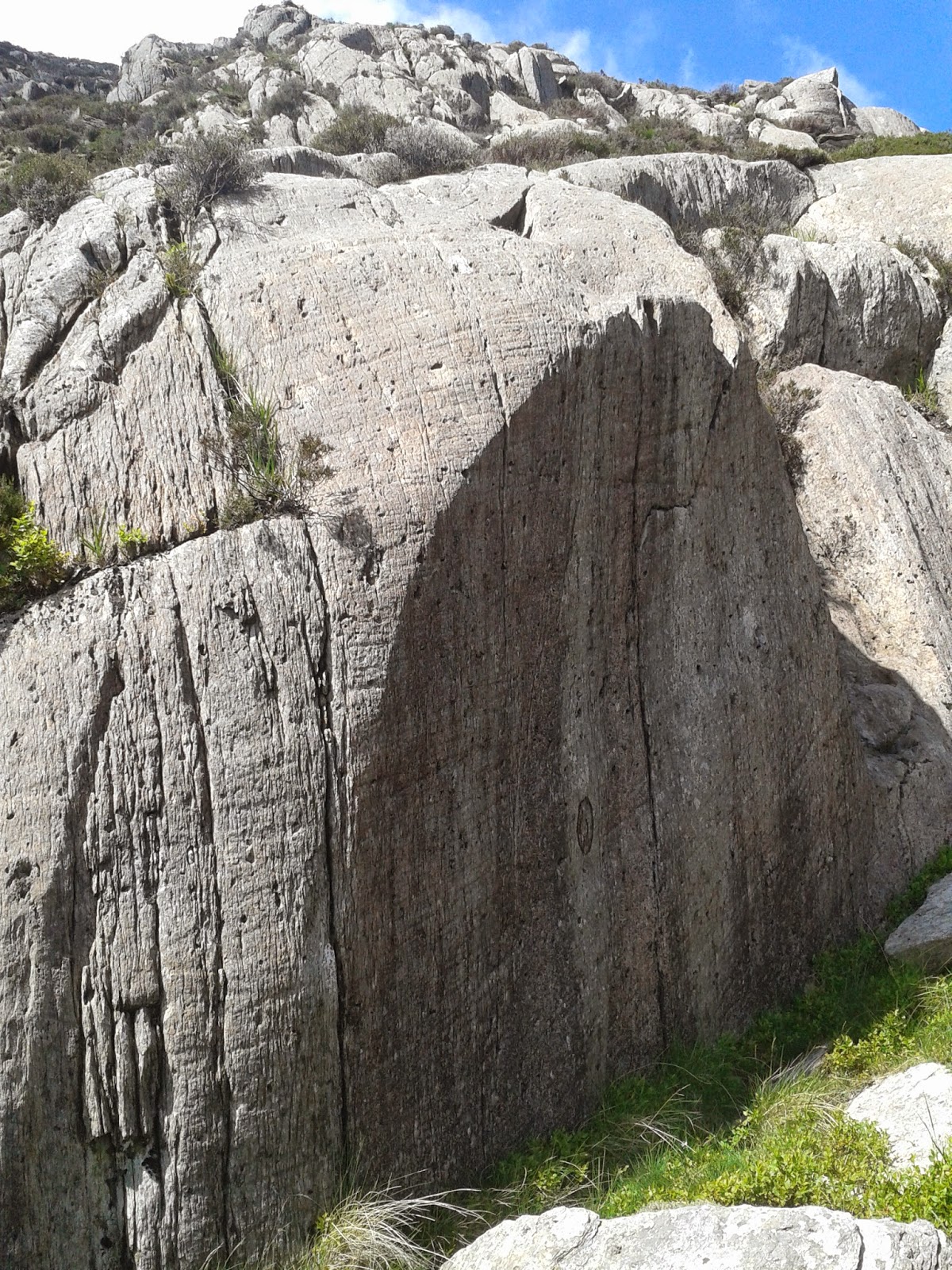 This one was too good to leave unclimbed: 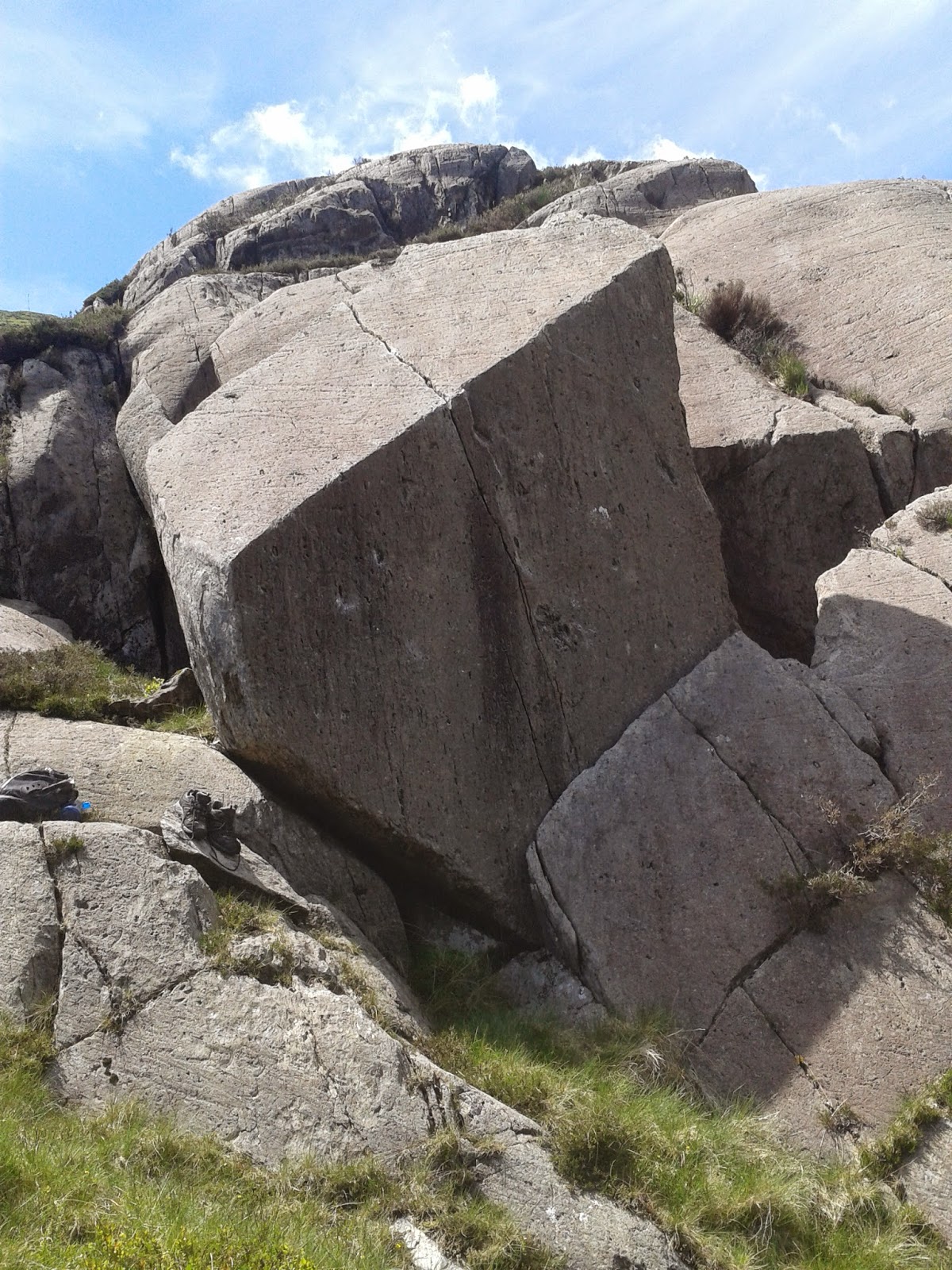 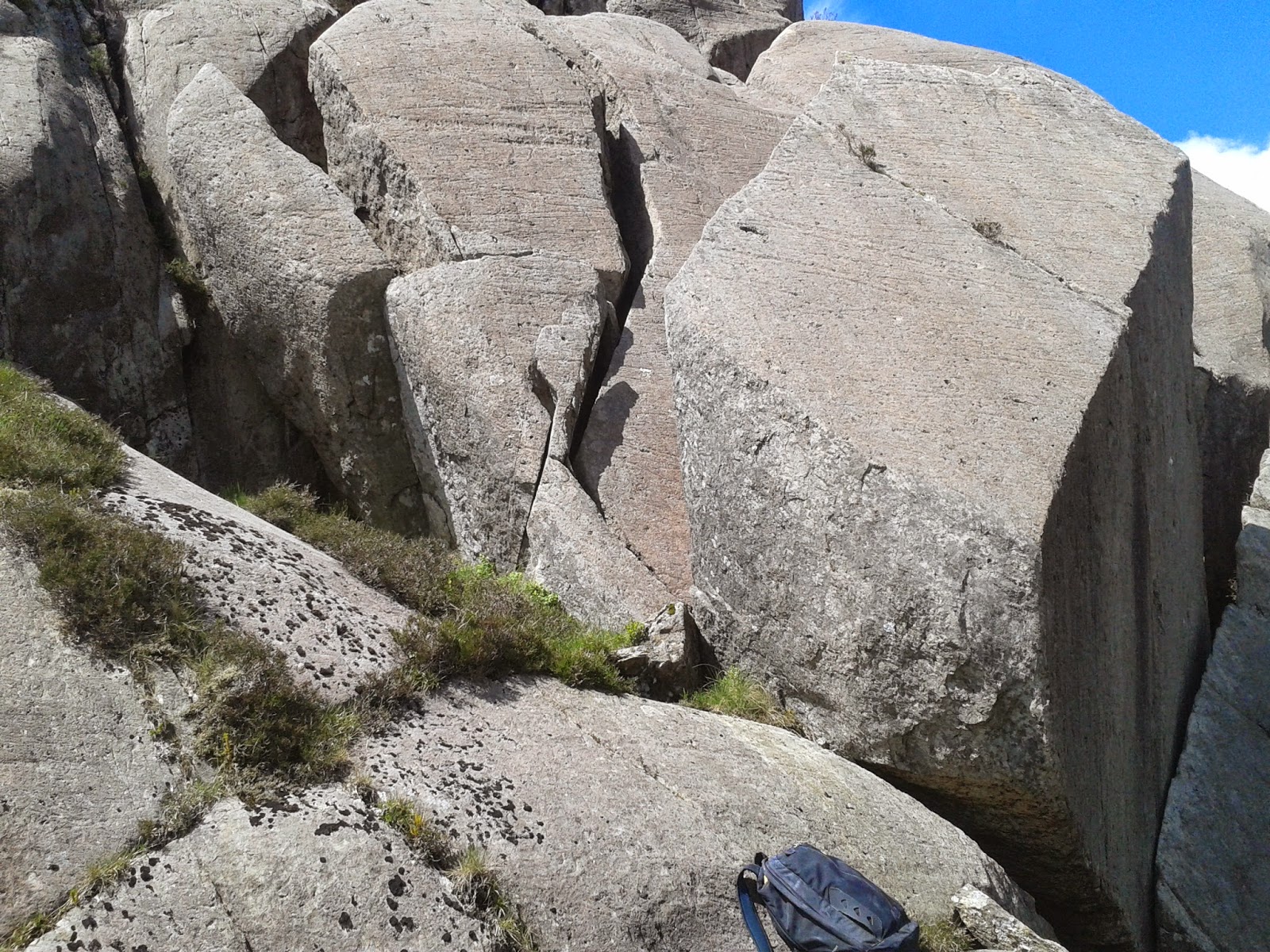 The vertical wall went on layaways until the crack hit the slab, where the crack opened enough to admit fingerlocks. It took over half an hour to bag it, as the vert section had very poor feet, the locks were baggy, and the layaways were slopey. Oh and I didn't want to break my legs. Wasn't going to kill me though, and the point of commitment when the heel was thrown up was as good a moment of clarity as in any past solos. Toying with the name Kick out The Jams, as that song sprung into my head as I re-lived the experience back on the ground. Font 6C! is my guess but pfff! who knows. let me know if you repeat it.
Enjoy

Random Musings whilst Dylan Sits on my Head

Since writing the piece on Twll Mawr, I appear to have reawakened my passion for the place...

I'v not been too psyched for the quarries since the last big push for the guide, but although I can't get excited about another line of bolts or those classics that might hurt me,  the back wall is a special place.

I'm starting to consider getting on Razor's edge, as its the easiest of two I have left on the back wall (True Finish basically boils down to a single seporate pitch I've abbed but not got captured by). Who knows, I may even get the urge to do something new. Let me know if you're up for an adventure, or wanting to finish of Joe and Ray's work (if it stops raining)
Posted by HoseyB at 05:25 No comments: