Another trip to the crack house and Receding hair line went down, see here in all its chalked up glory: 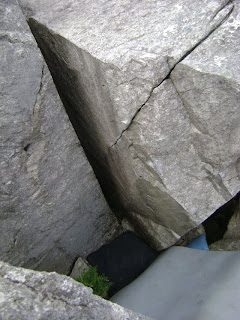 (note the clash stunt pad half over the mat and slope, 2 normal mats abutted should be fine..)

A better foot sequence and the belief my fingers were stronger seemed to do the trick. Start off the undercut inside Barred to the Bone and the flatty seen on the arete and follow the seam to glory. You dont use the foot block or cam the crack, but it feels a pretty natural, non eliminaty problem. V5/6 maybe, no Idea..

On to Toe bar, and got offthe ground a couple of times, but its still hard from here. I started thinking, esoteric technique or not, this was still quite hard, then Crack!

Mid Allez, my foot made the same noise my wrist did when I trashed it on a sloper, basically it gave in and noisily let go of its own accord, the Wuss!

Bit sore today but seems to still do what I want it to, might leave Toe Bar tho' as I can't be bothered to enter a specific training bout.

Should be climbing with a rope at the weekend! happy joy joy

Well its been a year since developing my little bits of Clegir. Thursday Provided an opportunity to have a boulder and after a quick Moose Session, I ambled up to The Crack House.
After my Bunker session I was keen to try the test peices of the venue; namely Shed party, the Rake, Toe Bar and Receding Hairline. I knew a lot had changed for me with the arrival of the twins, dodgy wrists and general lack of excercise, and although I'd trained a bit and regained some fitness, I was keen for a comparision. Also I'm currently questioning my ability to grade, even back then, and this meant I was fairly curious how they'd feel.
First up was Shed Party which I'd given V4. Initial impressions was I was certainly bolder before the twins, as the landing was definitely 2 mats and a spotter territory. Not a mortality thing I think, just not wanting to injure myself and therefore missing the few opportunities I do get to climb (and affect my ability to earn..)
Got it done and I think V4 is about right, compared to say Heelhook traverse at the cromlech.
Next up The Rake, again V3 was about right, Its only one move, but a big one.
Tried Receding Hairline next. I'd given it V4/5 and to be honest thats way off. In 4-5 goes I only managed to get 2-3 moves in, and its pretty sustained. Again one mat wasn't enough as it covers some ground laterally. The Issue was my finger strength as I couldn't hold the Hairline seam. If WireBrush crack is a good V5 and the Edge Problem is currently thought V6, Its certainly closer to Edge Problem hardeness.
Toe Bar was a non Starter as I couldn't Pull on. I gave it V4 which is a joke. the hardest move is the initial pull which is mainly driven by the ankles by a double heel-toe. I'd obviously developed this strength lots with my invert bouldering at Feidr Fw, and so with this esoteric skill set it felt easy and therefore V4. I eventually conceeded to a standing start which i got 2nd time.
The Plan is to work both RH and Toebar and its alternate finishes. This will hopefully give some enjoyment as well as buff me up again..
Posted by HoseyB at 04:41 No comments:

Got Out for the first time During Logans pre-school class. This miracle of community services means that Monday to Thursday between the hours of 12 and 1430 Logan is entertained and the Twins are asleep. Sam and I can "Do our thing". This meant that Sam did her exercise DVD and I went to Moose's Wall. The top out was promisingly dry, but the lower wall was distinctly Oozy.


Not wanting to waste time, I high tailed it to Clegir as it was in the breeze, and more importantly had phone reception and was near the car in case of Nappy Duties for Logan.


I hung out at the Bunker, which I haven't been to since here.


Since all that Clegir has got quite popular with pebble seekers and these lines have kind of got neglected. Shame really as Huggy Bear and The Wedge gave me a really good session. Even a couple of wet squalls didn't affect it as they were steep enough and sheltered. The Breeze even maintained dryness on the top out slabs and I bagged some thing New. Hug Avoidance starts as for Huggy Bear but after the first throw utilises a toe hook to gain crimps on the slab and rock out right.

So For Harassed Dad's with a spare hour The Bunkers a hit with three worthwhile puzzles to ponder and pull on.


Happy Days
Posted by HoseyB at 06:10 No comments:

Labels: Bouldering, Fatherhood, getting out, rain

Giveaway Project of the Month - May 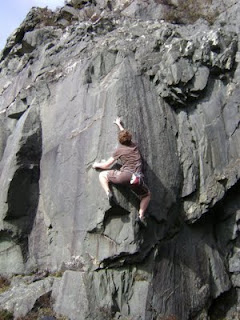 This is Calum on Rhinoplasty on Suncharm ledge, Its his boulder problem, but my suggested name. This is because A) it climbs the 'nose' of the arete, and B) he called his last problem sunshine swing..
We couldn't touch the true arete, that is the right hand side, as both the left hand side version (the aforementioned swing) and the cheval, depend on a big jug on the left hand side (in Calum's left hand in the pic). This is out of reach on the right hand side.
Tackling the pure arete and slab on the right is going to be hard, awesome and very thin, like Reed Richards on maximum stretch.

Go to it, there's no seepage and it dries lightening fast, just don't expect it to be easier than V6....

Oh, yes we may have got some of the other grades wrong there, as on last visit I generally couldn't get off the ground (!)
Posted by HoseyB at 13:08 No comments:

the Dry spell between 3 and 4 today was utilies and the Rampline was Sent!
"The Science of the Sword" is somewhere between V5-7 and starts sds on the left on two paralell slanty slopey crimps (10 past 8 O'clock) and follows the swirl through the bulge to the top.

Also bagged the direct sds line up the middle. "Lessons from a Rainstorm" is pretty dynamic and possibly V4

Grading is a bit confusing at the mo'
Posted by HoseyB at 09:55 No comments:

Popped up to the quartz block after work for a bit of shower dodging. Managed the SDS on the right arete. Ghostpoet is about V5 and starts L hand sidepull R hand mono.
I spent the rest of my time getting very excited about the rampline project, and even got off the ground before a rainbow stopped play.
watch this space.
Posted by HoseyB at 11:17 No comments: