With all this rain, thoughts once again turn to slate and its quick drying properties..

And speaking of Props, major props due to Tim Neill for restarting the re-equipping program in the quarries with some quality additions. I'll echo Simon's thoughts and point you at the to-do list as there are still 3 star routes with manky bolts.
Speaking of 3 star routes, here's one waiting to be born.. 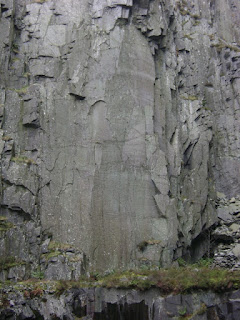 This impressive shield of rock is hidden away in the Lost world, and has, as they say, "nay grips". Well, some teeny tiny slopey ones. It doesn't go full height, as Rosen the Chosen canters overhead from the left, but there is an obvious spot for a lower off. I've never seen it seeping and its very clean for a wall in the hole.

Enjoy
Posted by HoseyB at 06:29 No comments:

Its that time of year where you take a frank look at where your at, and where you want to be.
Kind of MJ's man in the mirror, only in your socks..

The last week in May saw two great opportunities; a Day's climbing in Cwm Glas Bach, and my First proper Bouldering competition.

The cragging was mid week, perfect conditions, with young gun Calum Muskett. We weren't out to tear it all down, but got two particularly fun Climbing experiences. Calum led Pretty Girls Make Graves, a well protected and fiercely powerful E6 6b. He got it second go from the deck ( would have been onsight bar a failed slap..) I then had the oportunity to second it and suprised myself by doing all the moves. I chose however to get copious rests and fully dog it, as the comp was in a couple of days. I probably would have still dropped off it if I had given it full guns, but at a cost to me being able to move for the next few days.
Next was finally stepping up to the plate and getting on the sharp end for Fear of Infection. This is a classic E4 offwidth and Welsh testpeice, that I should have tried years ago. My first proper lead since the twins were born really, and it showed, with many gibber rests when the size six tipped out a bit or a foot skated. This was not a clean lead, but I was very happy to top out and will return to clean up a bit.

Basically my climbing at the moment is sporadic and depends on demonstrating during coaching sessions or during route setting (currently fishing for more Freelance setting if anyone needs owt..). At the moment this probably averages at about 2-3 hours effective training a week. This translates to maintaining a reasonable power to weight as I'm skinny, but zilch stamina. I'm ok for 20 moves to a shake, 40 to a rest, but on a squeeze chimney like Fear, thats only about 4 metres!


The Comp was at Rockover in Manchester, great atmosphere and a heathly prize fund, which meant a very strong field. The qualifiers were 30 problems from font 5 to hard, and 3 hours to flash them in. There weren't any points for  more than three goes so it was an onsight test. We'd brought the North Wales Youth Climbing Academy for some comp practise, and some of us coaches entered the adult open for some fun. It was certainly fun, and hot, very hot. I managed 183 points which means I flashed 18 of the 30 problems, got to the bonus holds on 3 further problems, and couldn't do any better on the remaining 9. A massive blood blister on my middle finger stopped play, so I know I was trying hard. I ended up 26th out of 50 so I was well made up. I may even get a chance to train for next year...

All taken into account, Bouldering is going ok, with a few Font 7a+'s going on the wish list, but if I want to make any gains on the ropes, I'm going to need to devise some cunning endurance training ploy. Whilst looking after 3 toddlers. Could be tricky.