Quick sprint up to the Cae Dafydd Boulders today with this man and the lovely Rose. 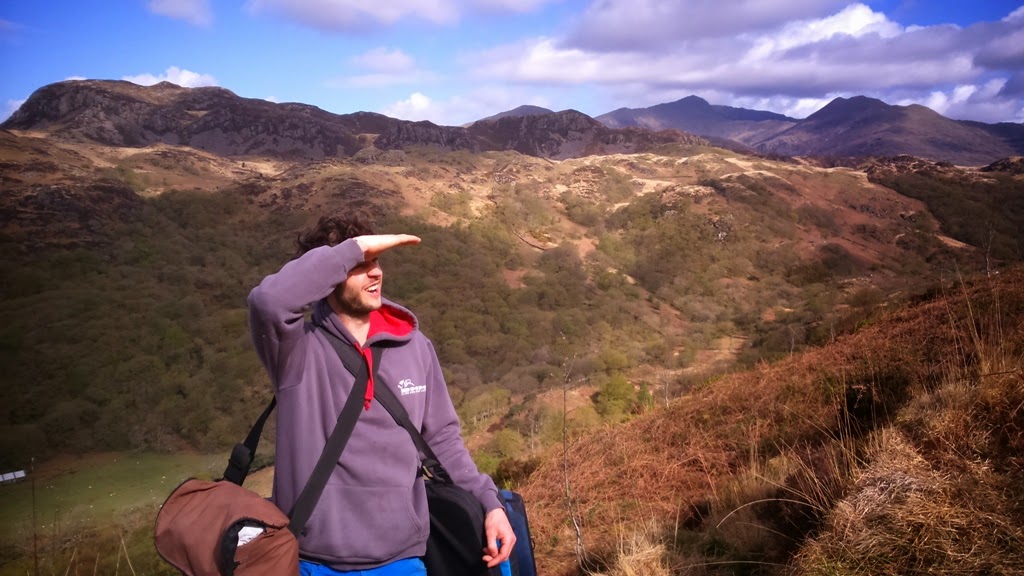 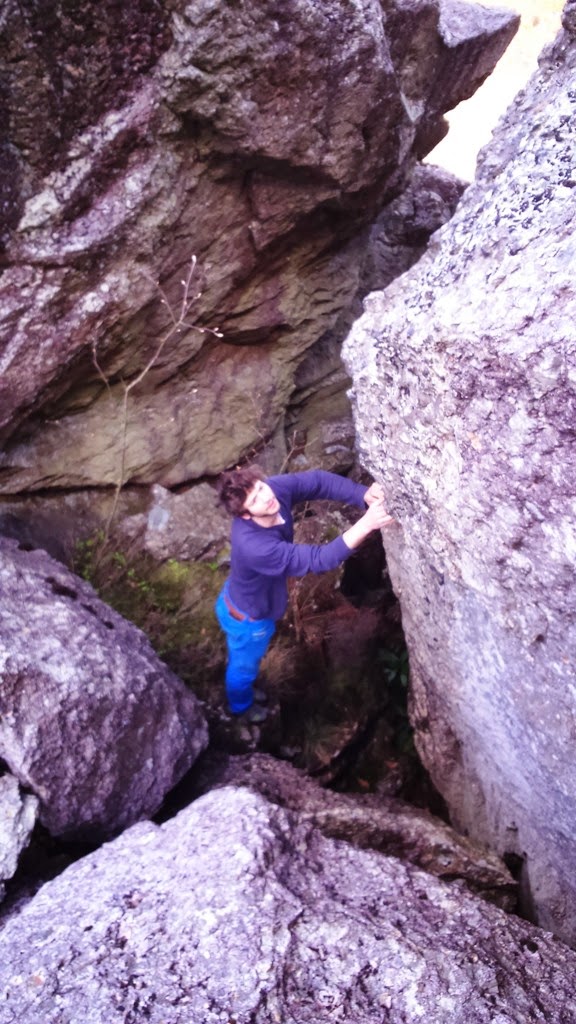 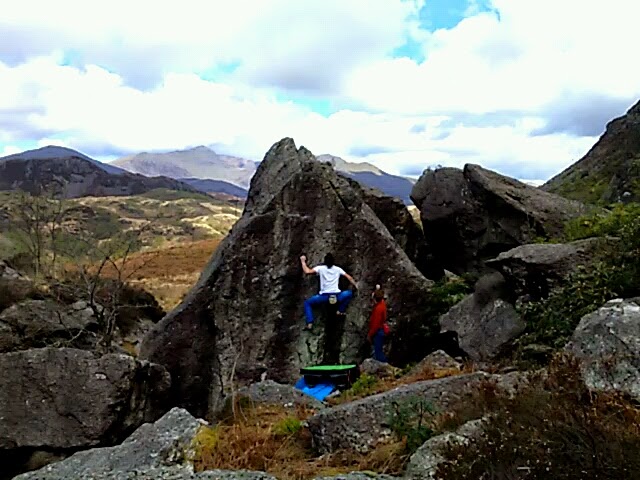 The flying nature of the visit, meant that a lot of spaniel like running around was done, (with Rose looking on patiently) before Mikey duly dispatched this no. If it hasn't been done before, He'd like to name it Zebradillo's Earlobe. Unfortunately, the video missed the sit start of the annoyingly perched flake and starts 3 moves in:

We then went into a canyon to tackle a rather overhanging wall with an opportunity for a rather special low start. I got stuck in with the ordinary standing start (after the mats were jigged into some form of safety net) and surprised myself by getting maybe two moves from the topout. Fear, sadly, and running out of ideas saw me stabbing legs across the canyon into a bridge too far. 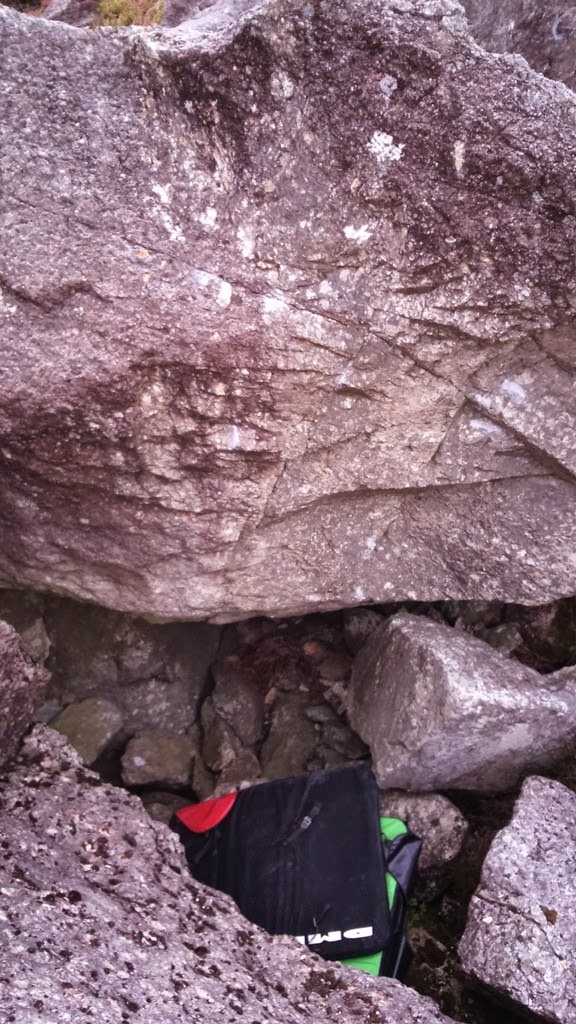 The two chalked edges in the horizontal slanting seam were my highpoint. The wall overhangs  by about 30ish degrees. More mats required....

After that Mikey and Rose had to dash, and I went to seek out some titbits I'd seen further over above the woods. Much crawling under trees later, I rediscovered them.
Here are a trio of done-years-ago's:

Starts sitting on the flake boulder underneath..

A dark video of jams, scrabbling and dirt 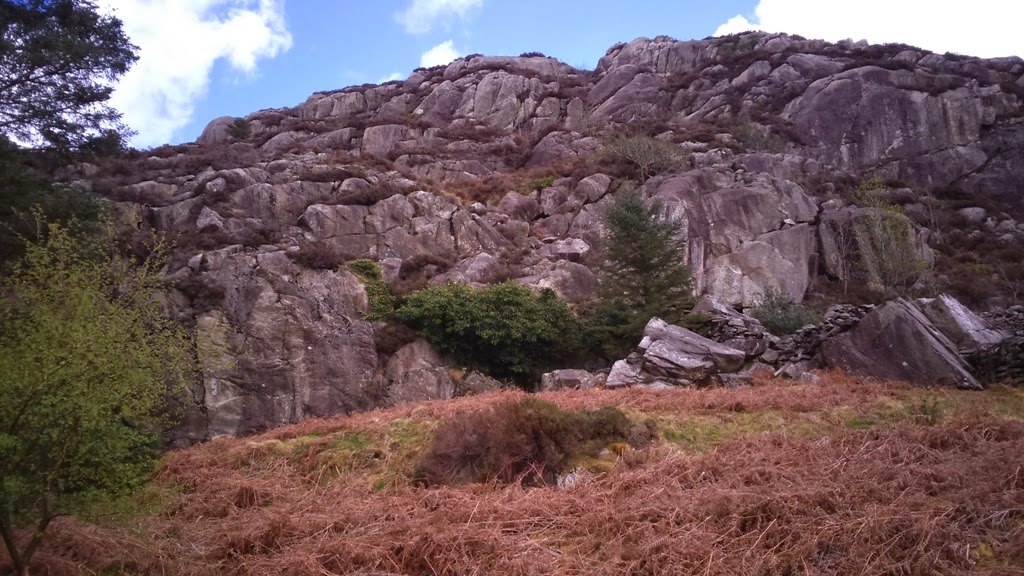 Walked out passed this and down into the woods. Don't really know why but it seemed like a good Idea at the time...
(may visit these walls again, if I can get to them a bit more amiably) 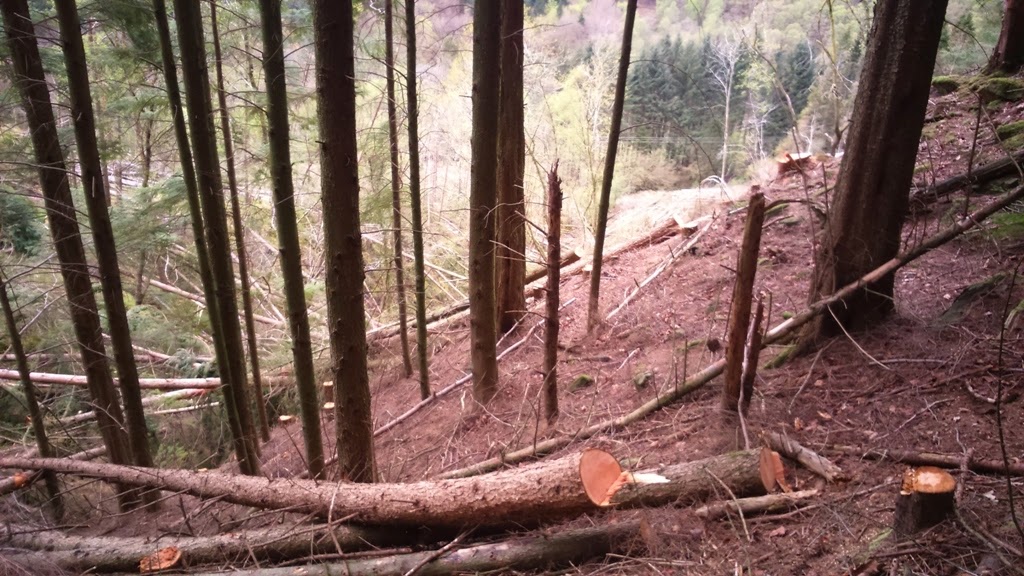 Much clambering over, under and along logs....

Took a swift trip to Benllech today, as although the chances of getting a tide window was slim, it was sunny, and Friday may not be climbable.. 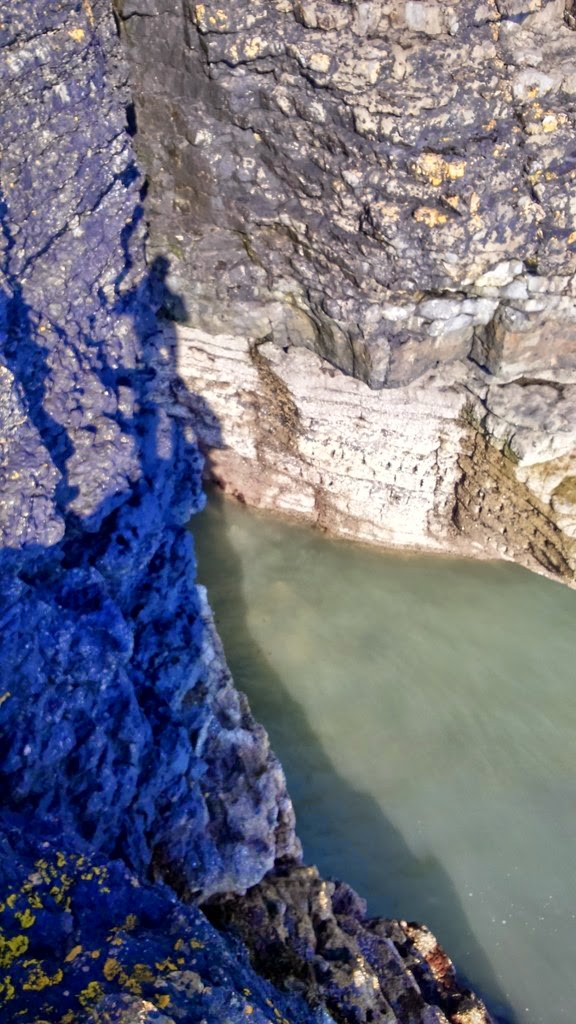 So the tide was in. Took this picture at 0930 and from what I can work out, Tides for fishing say this is at about 2.75m. It seems clear that a sub 2m tide is required..

Rather than go home, I set about down climbing Tosheroon from the finish, to see how close to the crux I could get.. 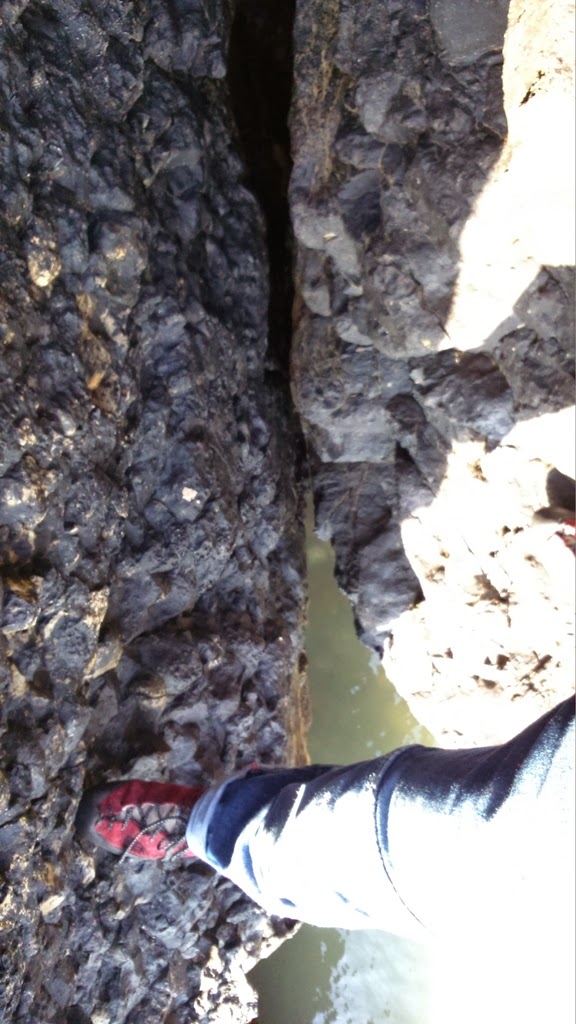 Note my Sportiva Hightops, just the job for spikey offwidths. I took my time, and although it was rather startlingly overhanging, the jugs were in the right places.. 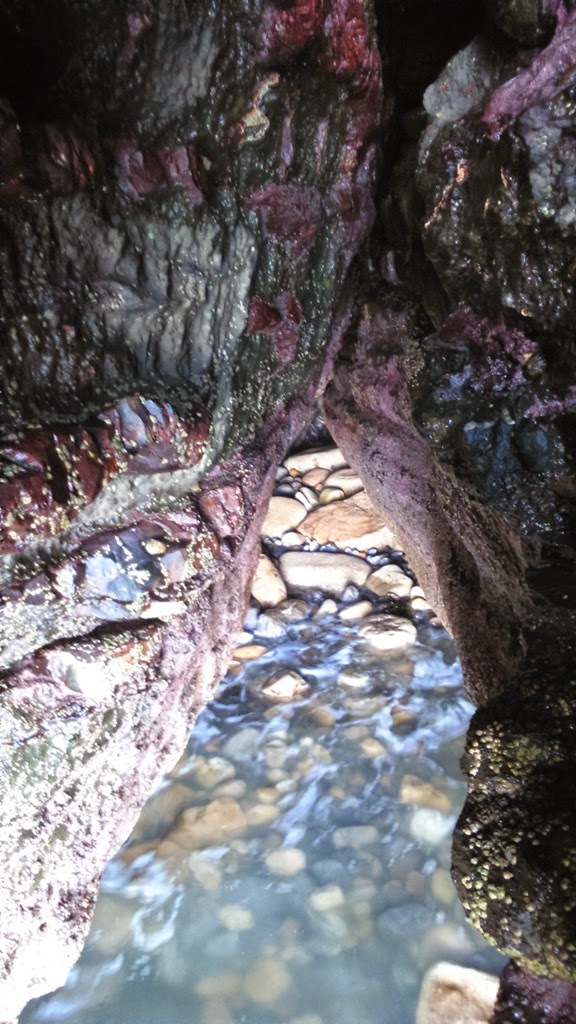 Here I am perched on the niche shelf, looking into the rather beautiful crux section of Tosheroon. This shelf can be seen here on an earlier photo shoot. I was now confident I wouldn't need a mat to protect the highball top out, but I was keen to inspect the crux further (without getting wet!) 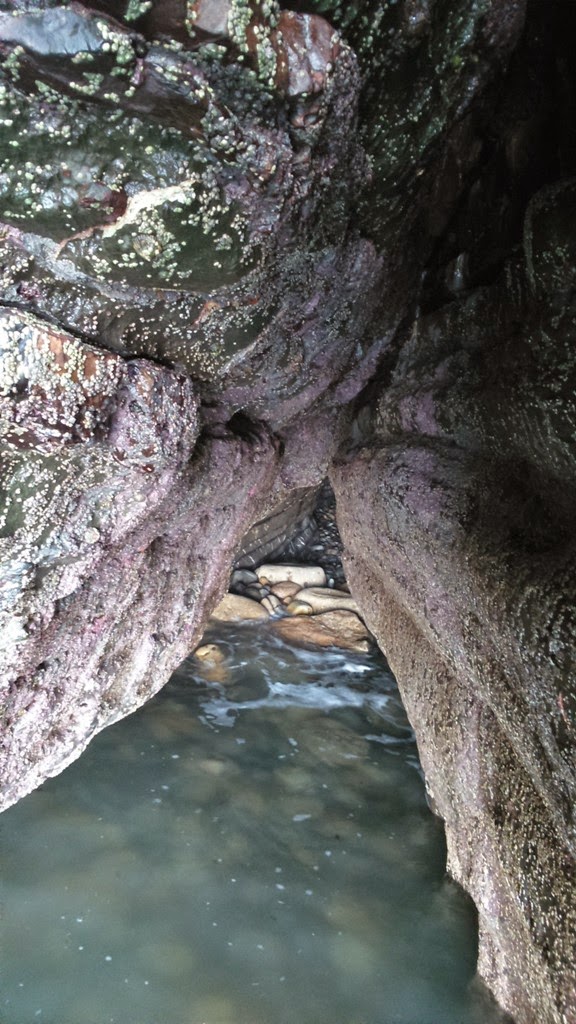 I managed to shuffle down to this squeeze chimney section, just beyond the jug shown at the top of the picture. The crack in the background is the forearm jam shown here on a another previous attempt.

When going ground up, the key at this point seemed to be flicking my body back to gain a high foot, and switching to pure left side of the cave, My reversal of the route seems to recommend kicking through and locking off the forearm jam to gain height and enter the squeeze section.

So psyched to have a proper go from the start, but not enough to wade, however. I also think I've convinced myself that dragging a mat is a waste of time, so the approach will be easier. A spotter helps, but I think I can just get on with it. As for what grade it may end up, It feels like a more involved Brutaliser, but I think its getting an XS grade as its still fairly unique...

This morning I woke up with a cricked neck. However, it was Friday, and that means adventure day, regardless of owies, the sun was up and I was going out... 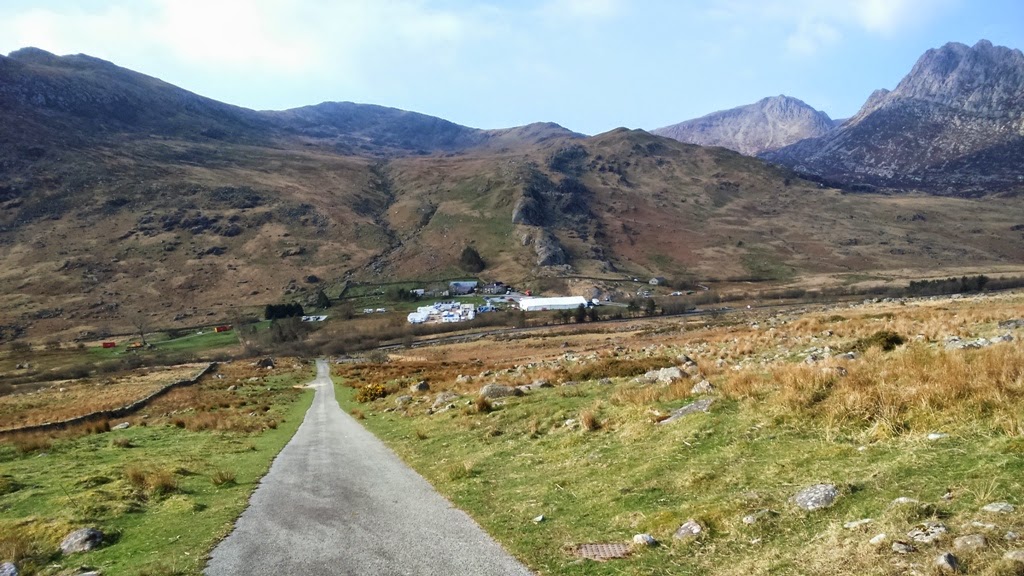 King Arthur's film set in full swing.. I decided to go up the Llugwy reservoir again, to give an appraisal of the "not worth it" boulders, hopefully find some worthwhile boulders (I'd brought my pad), and finally -Thrash the worn back wheel of the scooter to see if it'll last in its present state. Just inside the gate was a poor film guy in his landrover. He'd just installed this: 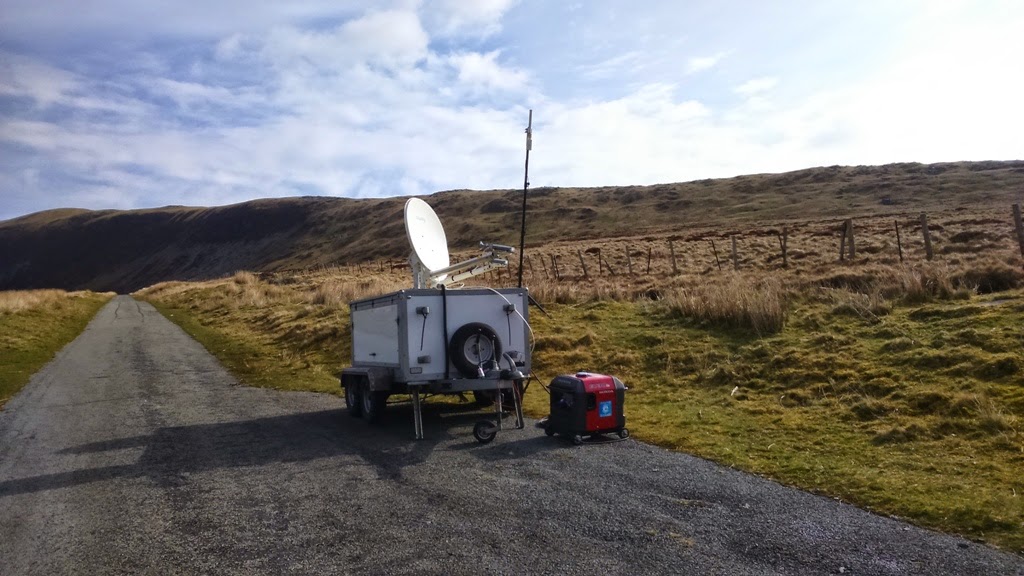 So the film guys can communicate with the mothership, and someone had in the meantime switched the locks on the gate! paranoia grips the waterboard... Maybe, anyhoo he was waiting patiently for the key holder... 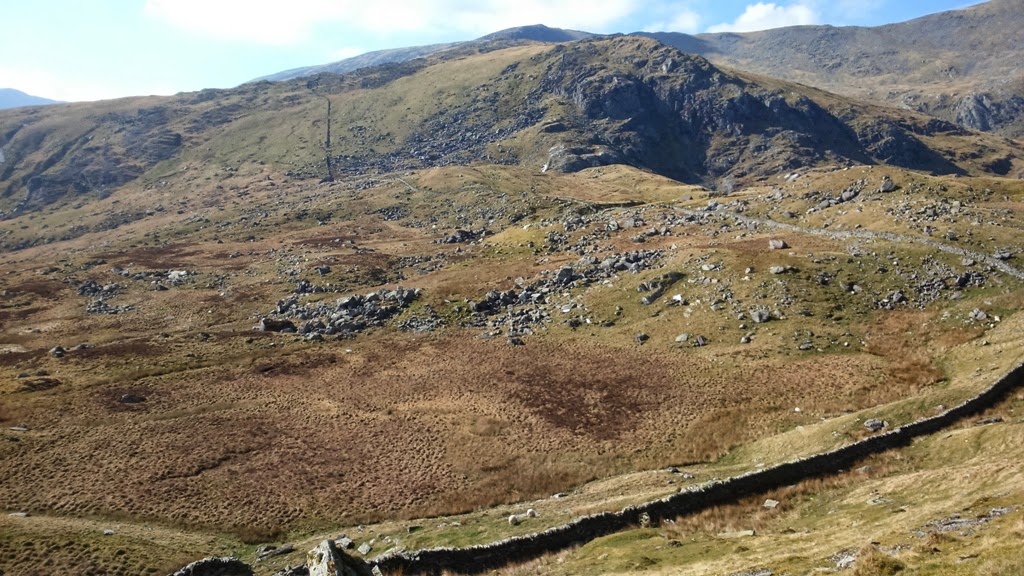 Target no. one. I surveyed the mighty field of boulders below the reservoir, and Low as was foretold.. They were a bit rubbish.

Next I ventured across to Booze buster buttress, as the crag just uphill from Mianog is apparently called 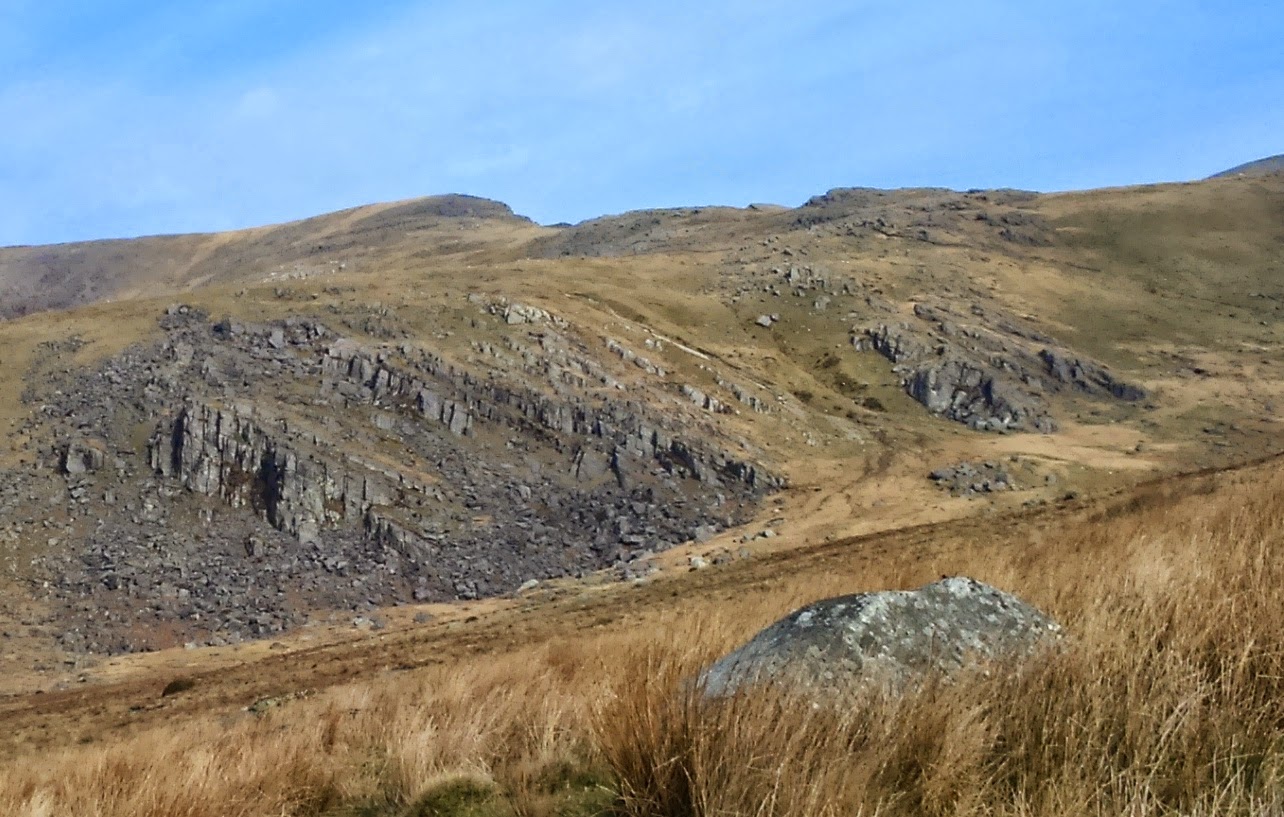 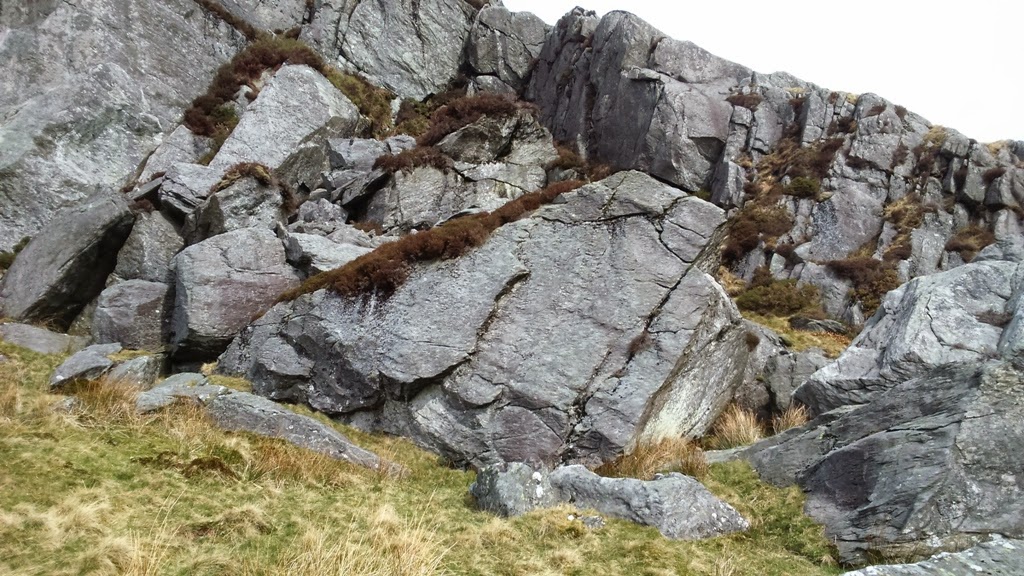 With damp feet I trudged uphill in search of Tarmac and was instead greeted with this: 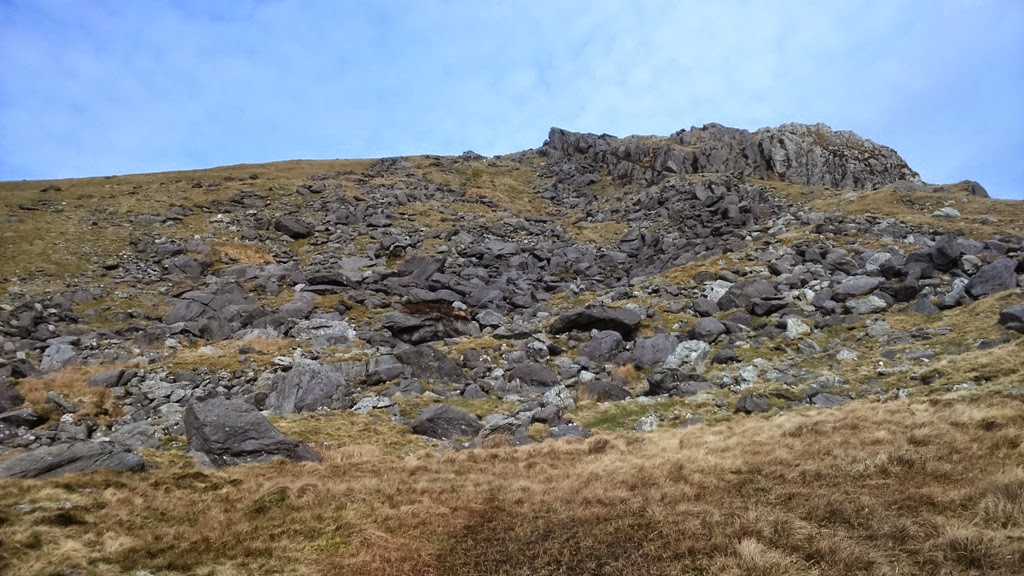 Somewhat hidden in a re-entrant, a selection of not-that-rubbish boulders. by this point my neck was getting rather agitated with the straps of the pad and I wasn't sure I could even weight my shoulder, let alone climb. However, after all this bog trotting, there was no way I was going to walk away empty handed.

This is the Mop top boulder. Its very big, has a heather hair do, and is fairly overhanging on all sides, at least at its base. 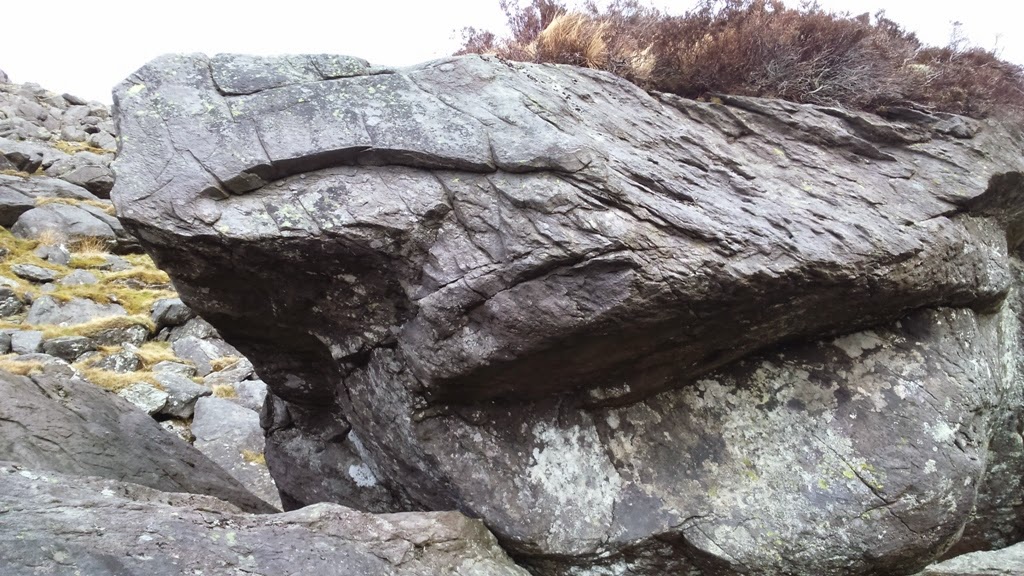 I chose to kick off here with a couple of easy lines, this arete I climbed on both sides the one in the video is "Potato" and is about F6B, the right side has a lower start and is a bit easier. The name refers to the first big hold on the slab, a big potato.

Wandering out further up I came across this overhanging arete... 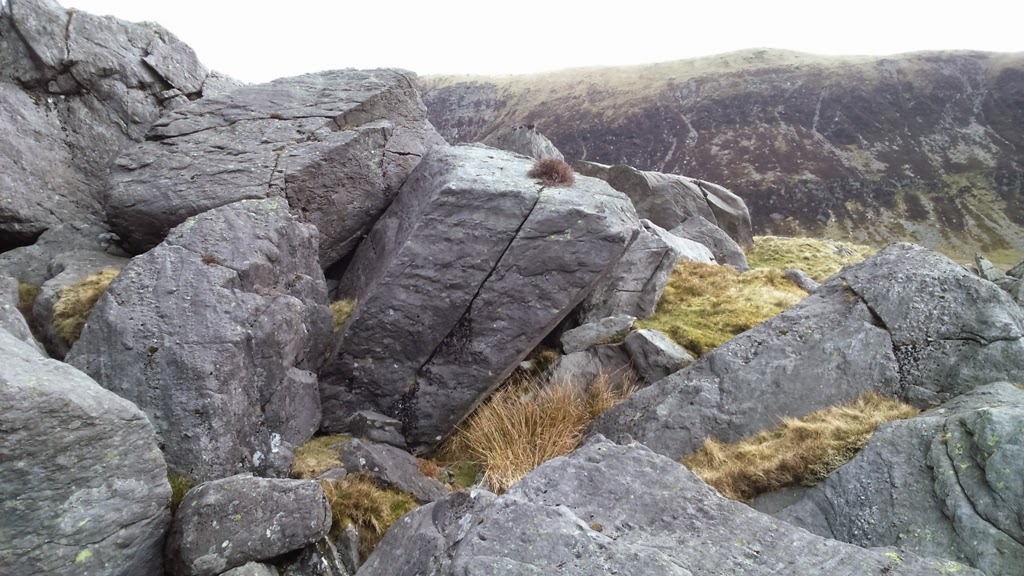 At first I couldn't hang the starting holds without a series of minor explosions from my neck. A fair bit of stretching later, I set about working it. It was diminutive, but the move required a lot of grip and aggression. I ended up getting the first 2 moves, then flailed a lot starting in the middle before getting two overlapping halves. a good rest and time spent propping up my mobile phone meant it went down next go.
"Bog Trotter's Lament" is somewhere in the F6C to 7A region

Here are the main holds: 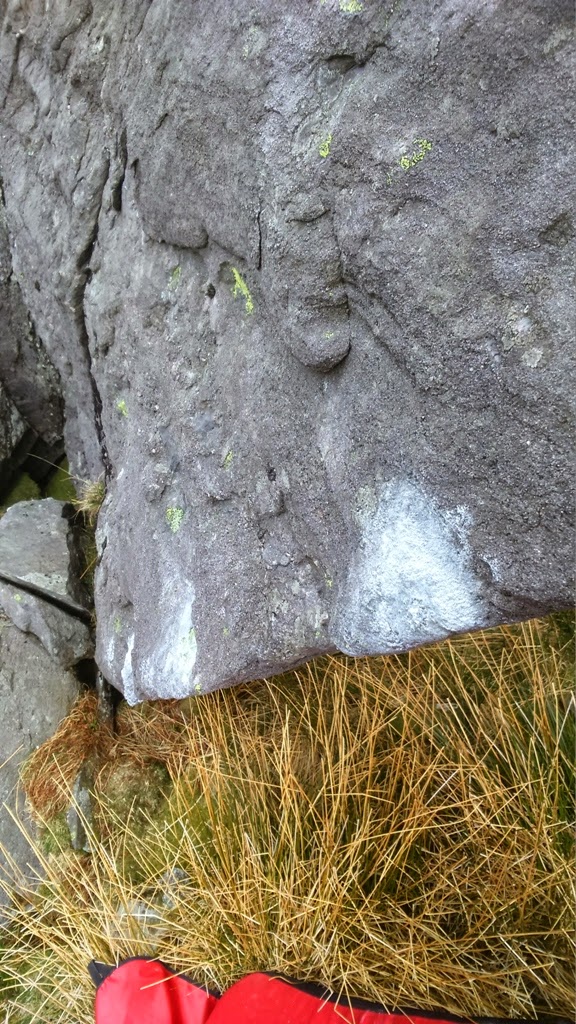 Took 20mins to get from the reservoir to the car, mainly because the wheel melted on the steepest bit, which led to some interesting fishtailing and a running stop. A more durable wheel is now in the post... 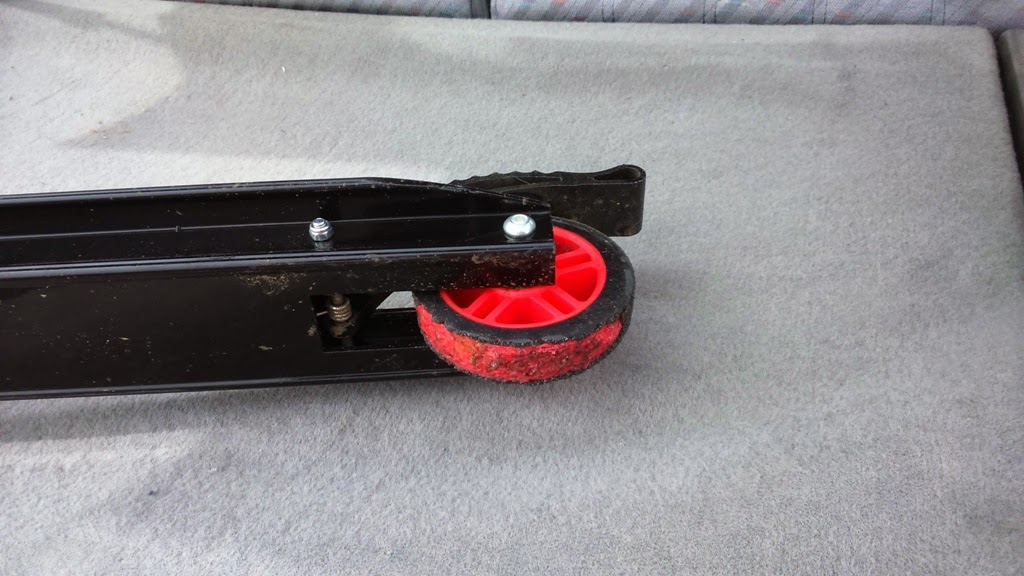 Wild Wales with a Scooter

Well sort of. I walked up a tarmac road and scootered down, but Cwm Llugwy is a wonderful solitary spot, apparently devoid of worthwhile bouldering, or so I'd been led to believe.. 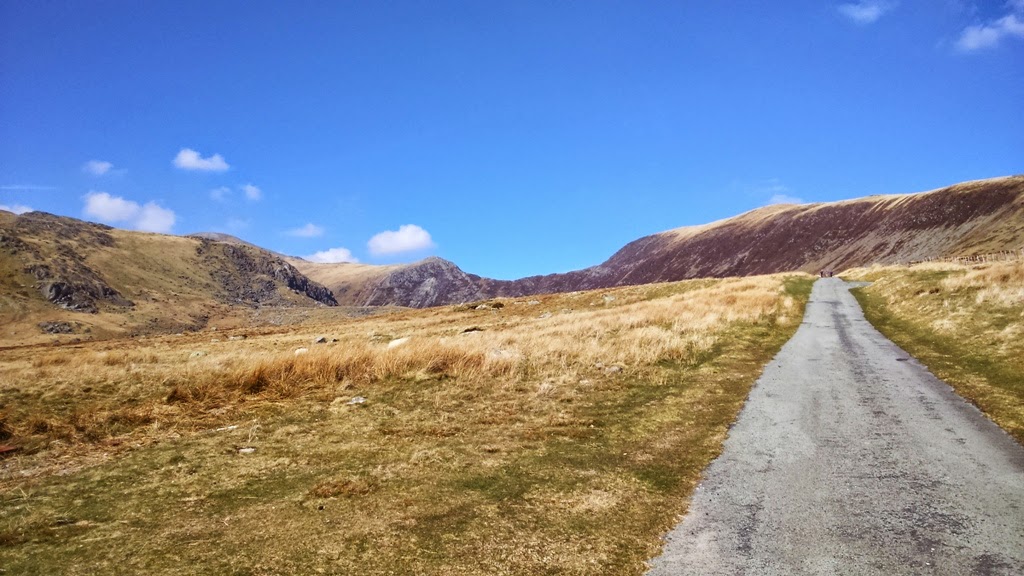 The tarmac road was steeper and straighter than the Marchlyn road, but felt less of a slogg. I think this was because I was enjoying the scenery. 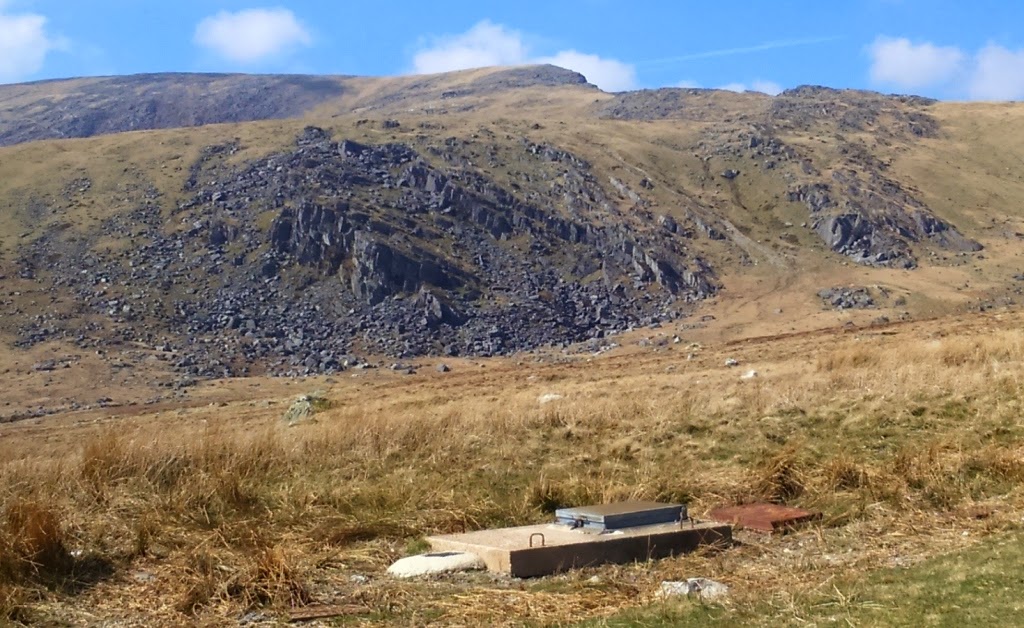 Carreg Mianianog; home of lots of boulders of varying quality, with only 4 or so being recorded? it that little crag to the right part of Mianiog? It appears to have some good lines.... Not today's destination though. 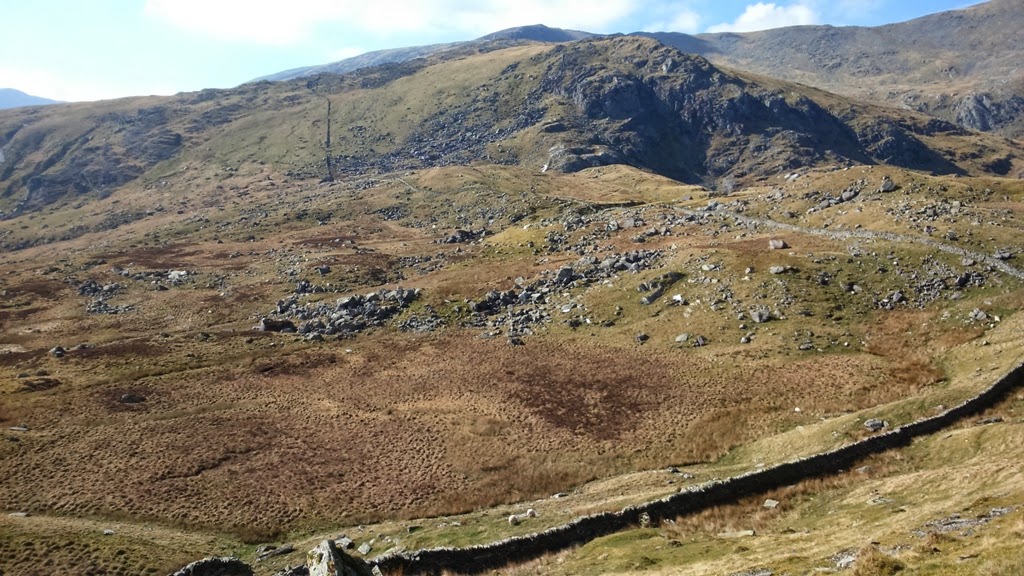 The boulders below the Reservoir. I have been informed they are not worthy of note (apart from as a platform to jump into bog) however some look quite big? the wall is tall, and thats a 1.5 story shed in the background.

Nonetheless. I was keen to wander beyond the lake, to where the sceptics had't wandered and Bingmaps hinted. Secluding my trusty scooter, I contoured around the shorter (far)side of the Llyn. 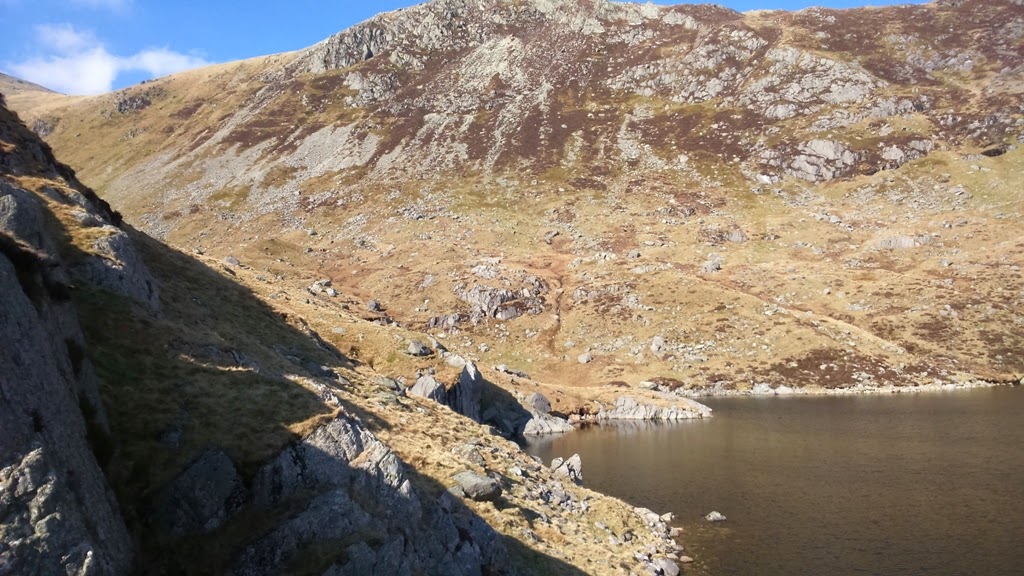 Sneaking  look into the cwm (nice pool side craglet) the rock encountered was everything from dolerite, rhyolite, to stuff full of potatoes.... Curiouser and curiouser. 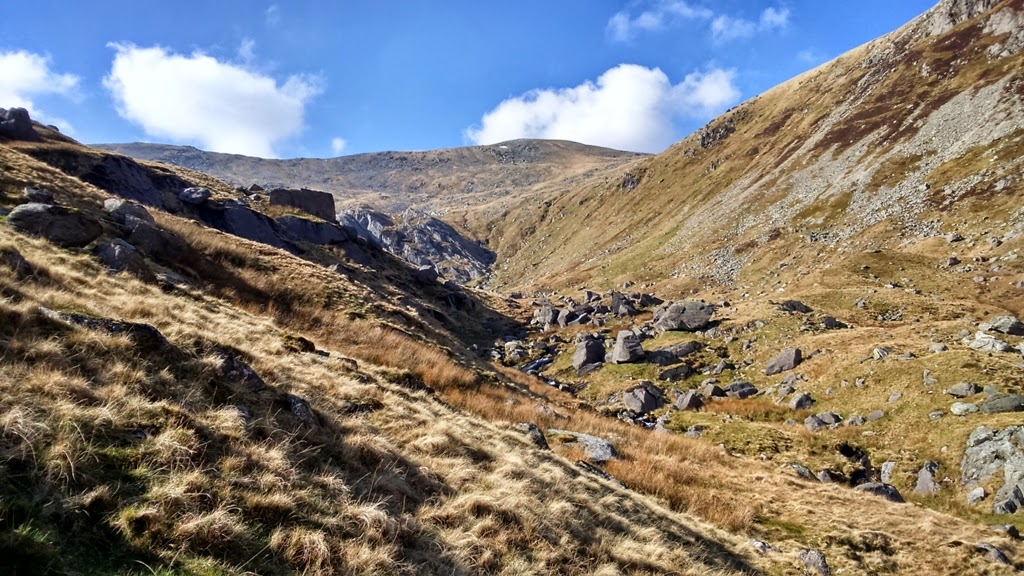 First Look. Its not Font. but boulders on dry ground (some not) some a good size (some not) and a real desire to drag a tent up here and cozy down. 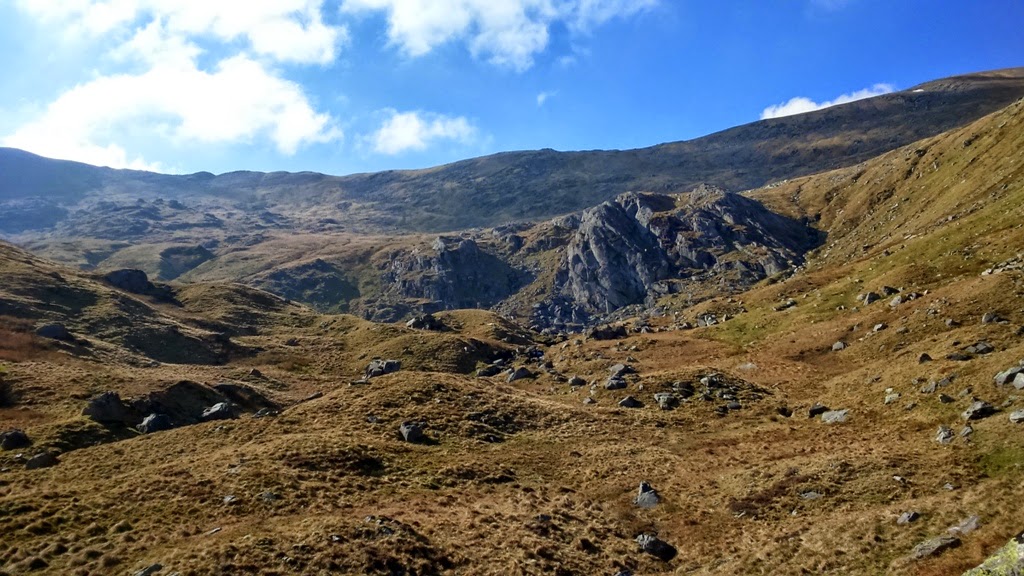 Craig y Tri Marchog. called Craig yr ogof (the other one) in the guide I think. Looks dead good, and home to a couple more boulders I reckon.

So there we go, a wild place, in easy ascess of those with legs and Light luggage, and an opportunity to bag a wild boulder. Yes I think I will return.... 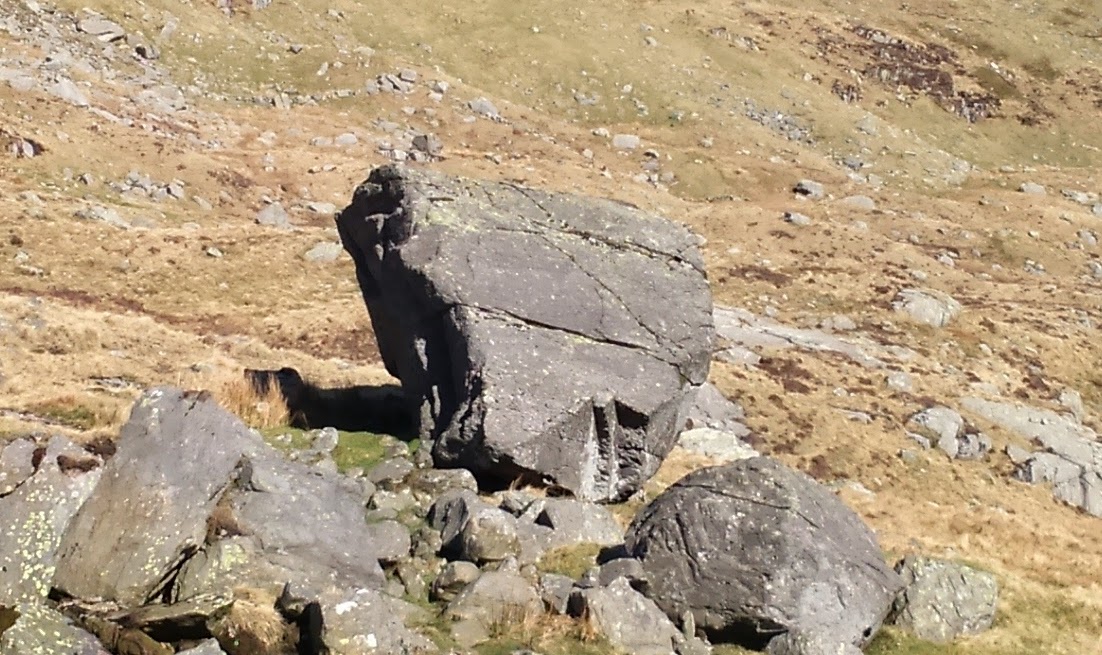 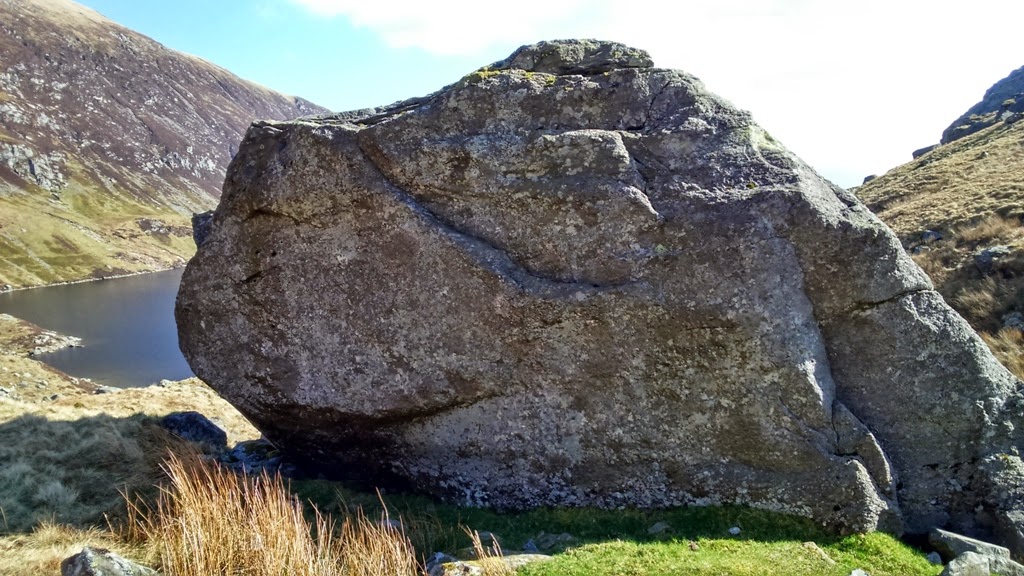 Two Views of the same boulder.... Probably only 3m high.

The New scooter took a little battering, as the rear wheel got a little hot (its very steep) a more expensive wheel might help (the brake was fine this time), but its still going strong for now, just a little lessened in diameter. I was in a rush and didn't time the decent, but it was well under 10mins and involved 3-4 stiles....