So my Birthday came around,  and I started hatching a silly plan, a chance to tick some boxes and scratch some itches. However,  a tweaky finger steered me away from the usual trad and bouldering options. I'd been enjoying coasteering with the kids, and was trying to conjour a more untamed option.I'd always wanted to visit some of the climbing on Cilan head, but I've left behind some of the boldness of youth, and didn't fancy trying hard without adequate protection.  But if I coasteer I can just swim past the tricky bits, right?
Plans were hatched and the forecast poured over,  I knew tide was important, turning and receding tides bash you less, and recently I'd been introduced to a swell forecast.  My thinking was get it small,  it'll be safer.  0.8m sounded small,  and as Sunday was worse,  I decided to go for it on Saturday.
I'd started to get overly psyched. It was 3km long without many escape points, I was zooming in on maps, and trawling the Web for more info.  I was realising this may not have been done before,  and was feeling the rat of nervousness gnawing at my optimism.  I countered this by organising buoyancy aids and paddling helmets.  We could always reverse.
On the day we were enjoying guessing the back roads so much that we missed the turn off to the Hells mouth parking,  and ended up at the Dorys farm parking instead.  This meant that we were much closer to the start, but would have a bit of a walk at the end. The mist was in and Nick Bullock's van wasn't there, surely an ill omen. However,  the walk down was chirpy, and the fisherman's path to us straight to the start.
I remember looking back at Dorys and thinking I was glad I wasn't climbing there, having some fluffy fun instead.
And it was until the first zawn. It looked a bit to serious to climb around,  and there was a stepping stone bridge of pebbles to the other wall, where a sloping ramp would spit up dry once more. Once in the swoshy sea decided to swat us a little,  like a cat with a toy. The rockover onto the ramp ended up much more dynamic and slippy than expected too. The rock losing all friction with the waves. No matter,  we pushed on, this sloping shelf couldn't last forever,  and we'd turn the corner into more bandy and breaky territory.  Indeed the rock reared up and jutted ahead of us, just the other side of a boulder strewn and foamy Bay.
The sea continued to taunt us. The tide was supposed to be slacking,  but the waves were still bouncing around the boulders, throwing in a beast every so often to shit us up. A more experienced reader of the topography may have reasoned that the sloping bedrock was amplifying the waves, and the boulders adding a bit of chaos to the currents. A more experienced coasteerer may have studied the sea on the approach and changed plans.  No matter. I was about to gain that experience.  We waited for a lull in the waves,  and with a nod we dropped in,  crossing the gap quickly. It was then the wheels started to come off. It became apparent that the near shore of the bay had no exit.  Ben pushed on to a distant crack, and I followed.  The waves seem massive and malicious at close quarters. The gap between Ben and I grew as I tired and I realised Ben was a better swimmer than I.
Like a pint glass hurled into a busy bar, the waves broke over my head, and I started to panic.  I've got a life jacket,  surely I'm safe? Waves like punches struck from unlikely directions,  pushing water into my mouth. Shit shit shit!
I'm a climber! I searched out any weakness in the shore, and latched onto a nearby rib. Hope was sucked away with the surf. No holds, no friction.  I latched a limpet with my hand and mantled. Only for a king wave to unseat me. Ben, now up the exit crack watched impotently as I was tumbled against the shore. Panic was now all consuming. I remember kicking out from the shore and telling Ben I was drowning.  To his credit,  he told me not to be silly,  and hatched an escape plan. He jumped back in, riding the waves to me he calmed me down,  and we kicked with the waves back to our starting point. Once back in the bay, the chaos of currents kept spitting us back from safety.  Somehow we found a path into the back of the bay and round to the boulders.
Hands on something solid I felt like crying. Especially as my foot was wedged. Once I'd flicked it out peace descended,  and I vomited out a gargantuan burp of air and seawater.  I think I stayed behind this boulder in the surf for a good 5 minutes,  utterly spent.  The next half hour was spent picking our way up the cliff. A couple of steps at a time,  this fisherman's path felt like the end of an untrained for marathon. I felt utterly guilty for risking our lives like that.  I didn't see the danger until I was in it.
However...
I'm alive!  I've learnt lots of useful stuff ( like not coasteering on Cilan head unless the sea is glass). My adventure partnership with Ben is a little deeper too.
All good. 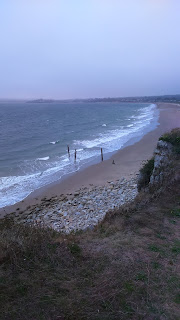 Not many pics. This is the beach at T'yn Towyn quarries during our mental warm down.