Giveaway Project of the Month - April

This kind of follows on from the Dyffryn Mymbyr post really. With my new found interest in the convenience of  classic bouldering, various back burner project are being neglected. With a new bouldering guide on the horizon, its always fun to through some new areas in the mix and see if anyone can establish some quality.

This time its Cwm Ffynnon, source of the first ever Giveaway back in 2009. Now, on the ramble to get to the Super Prow (still unclimbed folks!) I passed this wall. 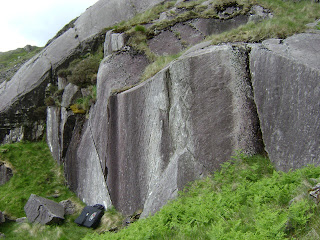 To help location, contour in round the lake from turtle rock, rising towards a wizard's hat of easy angled slab (seen in the background). Its a shortish wall with a slopey top out and lots of very small directional holds.
Continuing the contour to the super prow, you cross a obvious stream. Now on google maps around this point you see a circle of lighter grass within the heather with a dark dot within the circle. This isn't the next boulder but its in that vicinity (its another 100m or so to the Super Prow). This is the next boulder: 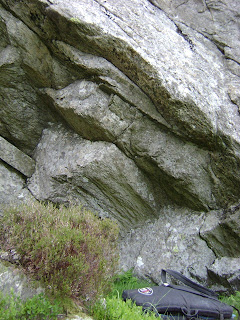 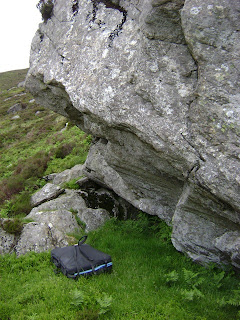 Looking back on these pic's I'm amazed I didn't even pull on. Back in 2009 I was a bit injured and concentrating on cracks, as my pulleys were fairly knackered. I'm actually keen to revisit these bad boys if I get a chance, but that may mean this year or the next. So rather than being greedy and secretive, consider them open projects and get them done (if you want to) less brushing for me....

Looking back at Dyffryn Mymbyr

I've been getting excited lately. I've been climbing outside twice already this month, and I may get out even more before we hit May. I've also been riding the buzz of the forthcoming North Wales Bouldering Guide. Since Llanberis Slate came out I've got excited about sport climbing, something I never thought I'd do, and the bouldering guide is also getting me thinking. I've indulging in atypical behaviour, like ticking classic boulder problems rather than scratching for something new, and thinking about what makes something good..

Ages ago I spent a lot of time scratching around Dyffryn Mymbyr, first seeking cracks, then just looking for fun. A lot of what I played on probably doesn't deserve to clutter up the forthcoming guide, However, due to unfinished projects and what-have-you, it never got recorded. Rather than let it fall down the back of the cupboard of history, I thought I'd record some stuff here.

I'd nicknamed the place Feidr fw as a homage to Vedauwoo a fat crack honeypot in Wyoming. My first foray located a collection of boulders between the pen y grwyd and plas y brenin at SH671 568. These are a long way from the road (gasp! 400m) and to get to them park in the first lay-by on the right after the chicane from pyg. Then go through the gate on the other side of the road and quest up the hill along the wire fence to the stone wall. Feidr fw is visible a little further up the hill.

The rock in this area is good quality and often rough. It has to be said they're diminutive in size, but they gave a good struggle from a sitter.. 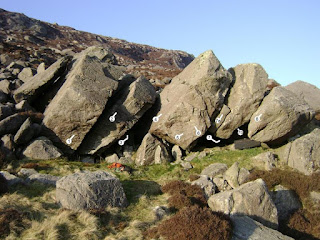 This was just a groovy place to chill in the sun and hang by my heels really. Happy feet was the star, although Big G visited and didn't get his boots on, probably due to dwarfing the boulders and having too big a chest to swing under the suspended boulder i.e 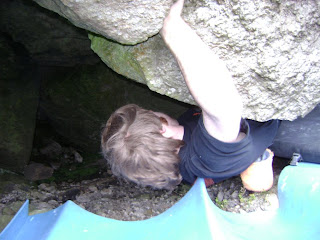 Yes that is a carry mat, or otherwise its back dab central. However it does allow you to make moves like these without recourse to a spotter.. 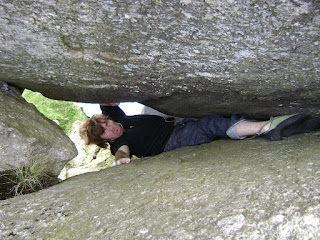 50m further up the hill is the glory boulder, so named because of the widefetish motto "Glory starts at 4 inches" as does the back of this crack. Again the inverts are hair scrapers but a lot of fun and even allows a kick through. 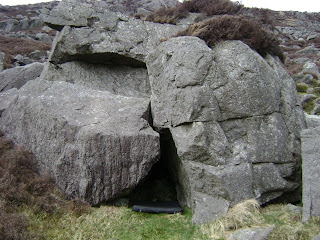 Glory F6A. Has a lying start facing out in the utter bowels off the fissure, with off two handjams in a chockstone in the cave to the left. This provides good inversion and some sweet hanging jams. Further interest include Lumpy Arete F5+ (the right arete of the fissure) and the Trio Traverse F6B, Which started on the third boulder just in shot right, followed the horizontal seam, and continued all the way along the slopey boulder no.3.

Just East of feidr fw is Giveaway project March 2010 .Over the stream to the West are some lost gems, Paul Higginson's mega F7a traverse and Julien Lines Highball slab.
I stumbled over the 30ft of slopey boulder shortly after Feidr Fw, and not knowing its history, christened it The Mighty 'Tashe, as it looks like Zebedee's face fuzz. 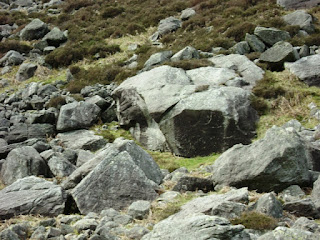 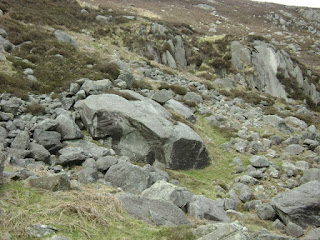 As well as Higg's traverse I did the central arete from a sitter (about F6A) and broke out from the concave lefthand section from a sitter giving Imhotep F6B+ which features an evil egyptian. Behind the 'Tashe is the highball 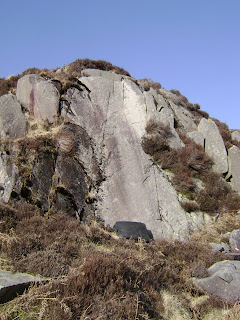 I have to return to try this..

Lastly, those of you who've delved into the bowels of this blog may remember Quack Crack F6C, which is by the wall, a little further west.

There's more to find in these hills, some of which I'm sworn to secrecy (although is bound to have been done by Mallory or summit) others are below Craig y Haul