So May coincided with the purchase of a second hand copy of the Cwm Silyn guide. Knowing Jenks the author was a keen boulderer, I set about scouring the text for tip off's and titbits. First stop was Craig y Llan: 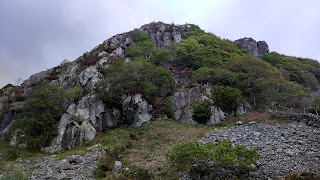 This is the second buttress with apparently no routes 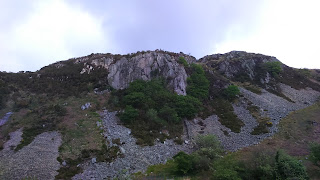 This is the third buttress with the Captains missing E3 on. Plenty of room for more. 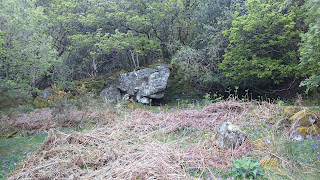 This is a boulder.  I searched for more, however the pickings were slim. I saw much on the horizon,  and once back in the real world I dove once more into Googlemaps.

This led to some Daddy Logan time walking around Llyn Cwmystradlyn. 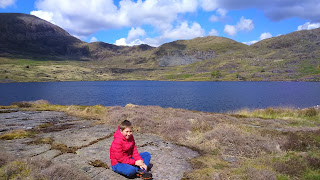 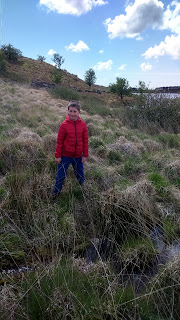 Beyond the bog and bluebells some rocks appeared. 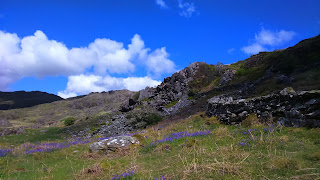 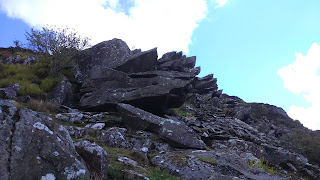 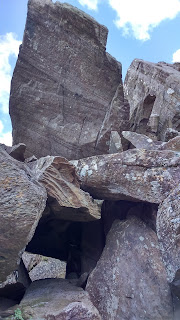 Pressing on into the back of the bowl more lumps arose in the distance.  However,  Logan was keen for Café Tyddyn Mawr and cake. They maybe good, something for another day. 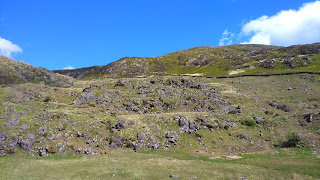 Another day, and in the wastelands beyond Pant Glas, I dragged a familiar victim out in search of treasure.. 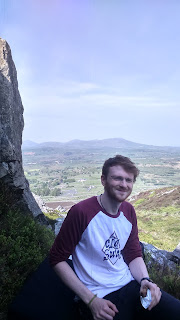 Good old Phil, ever patient, came away with a tasty FA this time. The video below shows his valiant ascent of "Lank it or Lump it". He said it was F6B! but I was too scared to find out as my T Rex arms couldn't follow his sequence.
I also would like to point out that the poor quality audio my phonecam provides has robbed you of the insight into Phil's psyche as he mutters "Oh god, oh god.. ".
If my memory serves me right Ben uttered similar mutterings when mid crux on Bertleman's Slide.
It appears that climbing in my company may lead to spiritual contemplation.

Back at Craig yr Ecs, I turned my attention to back the hitherto unmentioned left hand side of the arete.
The first video shows my earlier aborted attempt :


The presence of a rather large boulder below the arete on that side had worried me somewhat.  It was set back, but the arete did lean slightly,  and our two mats only really covered the immediate floor space. I had wrote it off for a later pad heavy visit.  Then Phil bagged his ascent and his courage spurred me on. I may have also felt a little competitive.


The result was named "Crawl it home" after an encouraging comment I offered as Phil completed his swift repeat shortly afterwards.  Footage of which I deleted by accident like a punter. Needless to say there was Lank involved (and crawling).  It's the harder of the two according to Phil (even with lanking)  so F6C ish.


Following this Blissful and bountiful day the weather refused to play ball, deluging on any subsequent moment of freedom. So it is left to June to provide more Treasure.