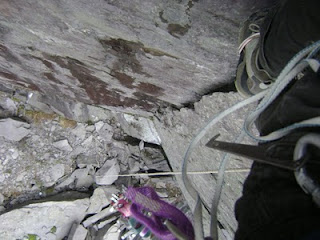 Finaly went back to clean this thing with some gear to keep me in. All was going good until I reached a 3m section of Doris. Not for a soon-to-be father of three. Maybe if someone else goes to town with this section It may clean up, but for me I'm off to examine the project list I gave to the aformentioned hippy, to see if there isn't another plum worthy of the name.

Giveaway Project of the Month- January and February 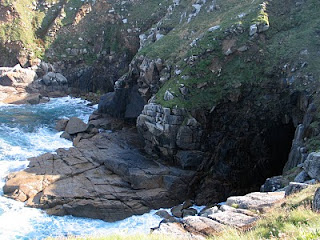 January has been rammed with work and organising the BMC Youth climbing series. Consequently we've reached February and no project was released from the vaults. To pay for this grave error this giveaway is a biggie.
Take note anyone going to host for the BMC International meet this year as these projects are in Haldrine Cove, a couple of minutes scramble from Bosigran, and both are single pitch, so quick to capture.

First on the wave cut platform at the back of the cove is both an overhanging arete, and a corner crack groove thing, both appear Low to Mid Extreme. There is also a blank wall of matchstick edges, and a paddable base.

Secondly the bay on the far side of the wave cut platform is a line I coveted for years, but have not had the chance to seize. The right wall of the bay is a particularly wave polished bulging sweep of prime cornish granite. Bisecting this is a sweeping hand crack, bottomed out in places by a typical bosigran "coal seam". This would provide a stiff challenge in jamming and an aesthetic jewel in anyones crown.

There. Given away a prized posession, I'll try not to forget March's gift...
Posted by HoseyB at 13:45 No comments: