Finally go round to doing the block again, as I must admit lack of motivation has made me ignore it for a couple of months.
Managed 2 mins 15 secs, which is 26 secs off my best, and 19 secs off what I consider acceptable, so I'll attack them again once a week. Sportacus press ups are going well and assisted roof beam pinch pull ups are continuing...
Best of all I've been lent 2 more Rock'n rollers!
The Beast Abides...
Posted by HoseyB at 12:31 No comments:

Watching TV with Logan the other day I came across this:
Sporticus Ball Push ups
I thought "they look cool" and later on that evening had a go..
It might be because Logan's postman pat football is a tad squidgy, but these turned out to be a bit tricky, and have now been incorporated into my daily routine.
Forget Mark Twight - I have Sporticus!
Posted by HoseyB at 11:43 No comments:

Had my first foray on the Beast last night. My good friend the esteemed Mr Walters QC (also known as Matt) was visiting after a couple of years in a bunker in Afghanistan drinking Gin. So he was quite up for a bit of a scramble and general mickey taking. He also took a picture or two, which may appear here.
My initial action was to try and weight a Camalot 5 which I had brought along to test. Good News, it pulled straight out so I don't need to waste energy lugging those things back up...
Next was an actual attempt, this provided loads of useful information.
-Rock'n Rollers are old skool cool, but a bugger to get out after you fall on them.
-Its safe if I've enough Diddy cams.
-If I want to get past the 3m mark I have to get a lot stronger...
Entering the jaws is ok, but to succeed I have to then face the other way. It is here, at the start, where there is at least one single real hold (a wide finger-and-thumb-tip pinch) that appears to be the only place to do it.
So this brings me to
-I don't need to revisit until I'm a lot stronger.
There. All pretty positive really, I'll test my core and upper strength soon to see if I can improve significantly there, and other than that Its just getting on some classics and classic offwidths and getting some battle strength up.
all good
Posted by HoseyB at 03:12 No comments:

This is now getting a bit tricky really..

I'm now getting to get out a bit which means I'm getting keen to do new stuff again. I've rationed myself to new boulders, and one route a year to prevent obsession getting in the way of family life (the Beast is already causing some serious daydreaming..)
All hunky dory, but I'm not quite getting out enough to refill the reservoir of unclimbed rocks in my head. This means I'm now getting down to stuff I've a real attachment to.
No Worries, once the Slate guide is out of my hair, I can start drawing people's attention to a couple of sweet blank spaces, and maybe I'll get out more...

This month there's a small but perfectly formed blank space, on a little ledge above Prometheus Unbound in Lost world: 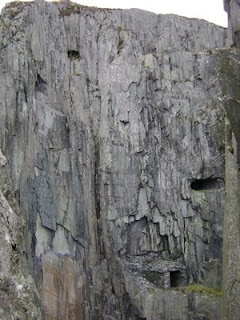 The ledge is in the upper right corner, and is reached from the level you must now attain to drop down to the ladders to Kyber pass (since the railway got a little too exciting).

At its end is a lovely steep and economically featured wall with a glaciated top out, keeping it exciting to the end. Would suit bolts, and has a touch of seepage, but very pretty none the less.

Well its been an eventful few weeks, I've tied on and been climbing in the real world (Wolf the wad instigated a trip to Llandulas, I wasn't totally weak either...) and my ankle is a bit weak on high stepping foot crimps...

The big news is I was able to clean this years new route project at the weekend
Codename:the Beast in me

Well it was an after work jobby, and with one thing or another I didn't yomp to position until 8.30, This provided me with certain information:
-Walking uphill for protracted periods with heavy bags is quite tiring
-Kiddie tunes buzzing round your head may be debilitating but at least they help you keep pace.

This being a responsible Daddy adventure, the belay involved 4 rope protectors and I was abbing with a shunt line. Very dope on a rope. 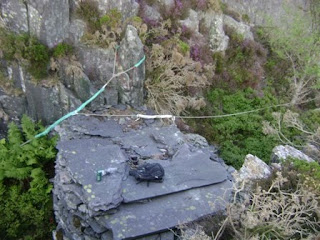 The top 5m of the Beast is a little bit scary with a couple of metres of runout, and a smattering of rp's: 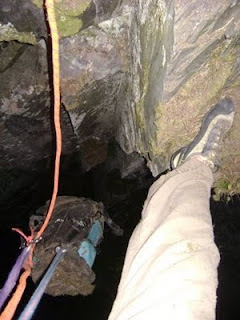 THe brownish ledge you can see is the rest before this and the site of the last good cams. You can just about work out the v groove snaking away below this into the dark..

Those familiar with the more exciting parts of the quarries will recognise the fluffy green powder on the walls pre brushing.. 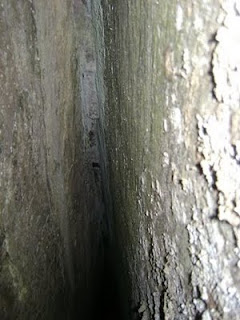 This tends to form in the slate crevases and dark dry corners, and indicates the groove stays pretty dry which is good news on the conditions / massive freeze fracture catastrophe front..


Looking down through the main roof: 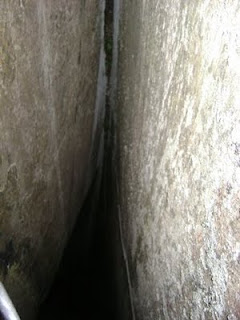 All I need now is a few more of these: 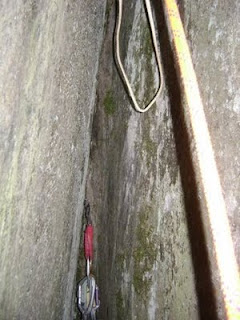 Micro Cams! or sliders, or any active protection for a parallel slot averaging 7-10mm.
Once I've enough pro, off I'll go!
Watch this space..
(got home at 1am)
Posted by HoseyB at 05:09 No comments: