So.. Those more familiar to this blog will know Mick fowler has been a role model of sorts to me, certainly in the formative years of climbing scrapes and Japes. More eagle-eyed visitors may recognise the title reference..
Knowing I'd never do something as hazardous as Breakaway, my eyes have nevertheless been drawn to adventurous challenges of that ilk. North Wales has a whole host of such adventures on the Lleyn, and indeed a whole "Shale City". It was inevitable I'd be drawn here.

Unfortunately, it is mainly various shades of death, or wad fodder of course. There was one route that Intrigued me; The Aguille Merlot Traverse AD+. 3 pitches,Ray Kay, Tech 4... all the right buttons. Once the description mentioned a tent peg belay I was sold.

All I had to do was rustle up a partner, That's why Ben is reliable; he's special like me.

Unfortunately, or first visit coincided with rain, just as we arrived... 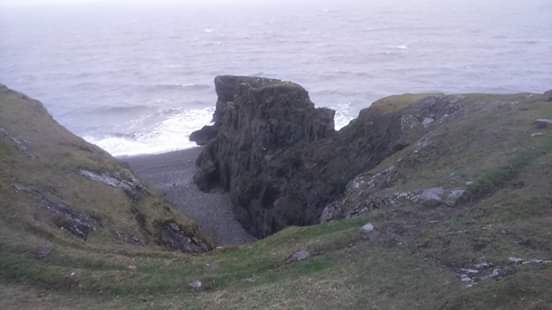 However, 2 years later (last Tuesday) Our second visit was Dry!! 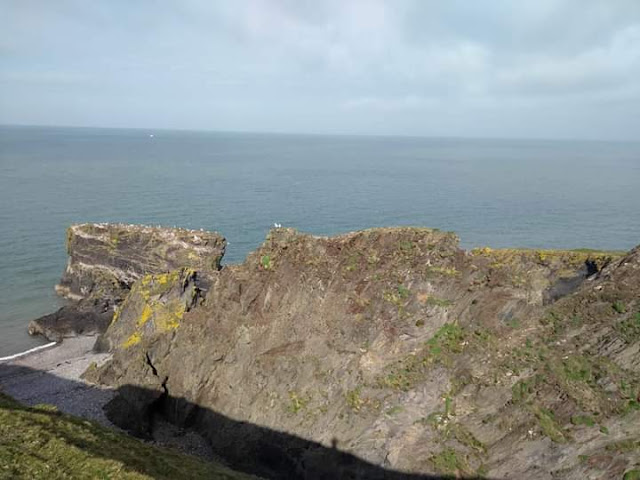 The Aguille Merlot Traverse (Plonk Fin) comprises of a 100m thin wafer of mainly rock jutting out of the cliff into a secluded bay. Access is scrambley or tidal, and quite adventurous. Also unlike most other such adventures hereabouts, it isn't bird banned. 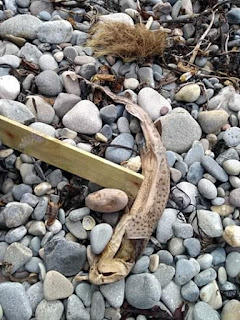 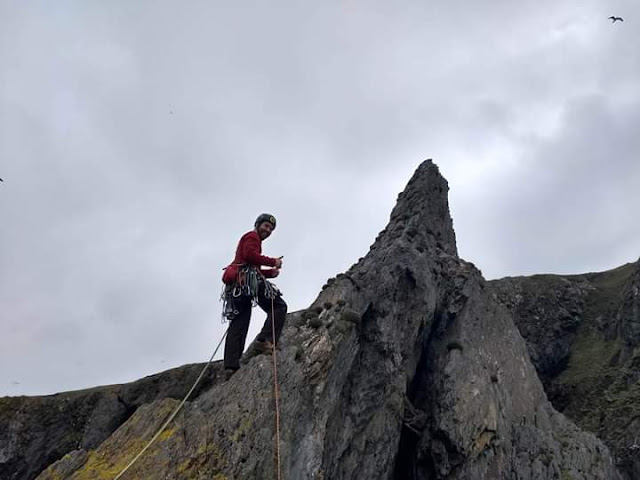 Starting off on the route, The shallow angle of this section had led me to believe a stroll in trainers would be sufficient... How wrong I was. 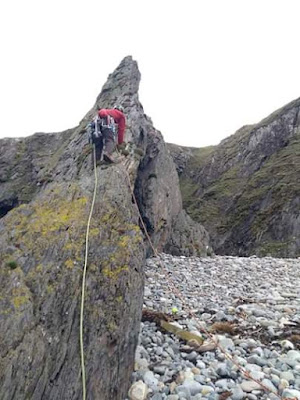 The general feel underfoot was one of  tightly packed, but disassembled lego. Combined with a healthy crop of thrift, it made progress a little delicate, I got a nut in a little further on from this point, the solitary gear of Pitch one. 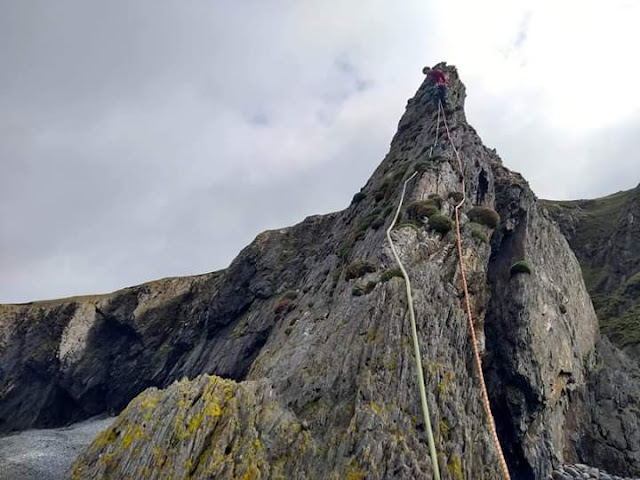 Arriving at the first belay, a substantial, if wobbly spike. 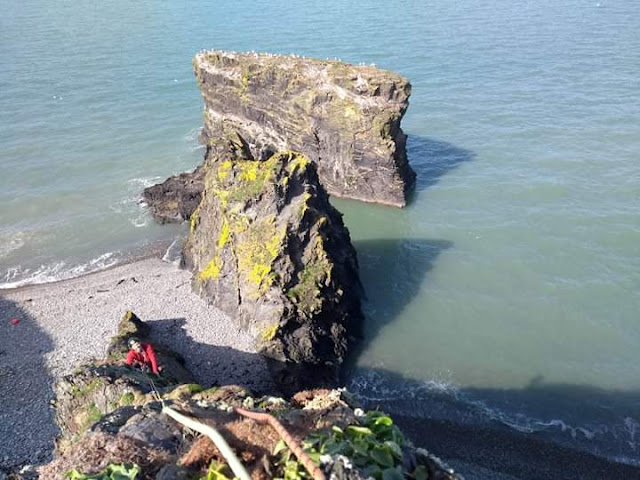 Ben led the middle pitch, and was very excited to place his first Warthog. He was giggling quietly as he did so. He said it was because the world was vibrating.. It also steepened at this point, which made me glad that I'd changed into my rock shoes on the belay. The second belay consisted of a substantial amount of rope drappage, and another warthog (such fun!). 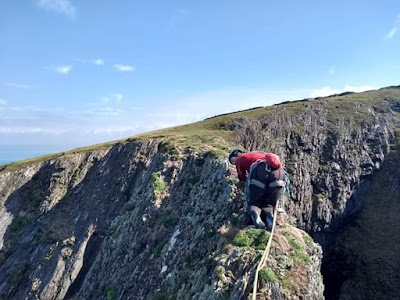 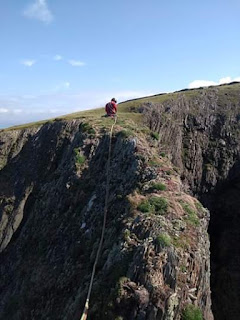 Contemplating leaving the picnic field and descending to the fangs below. Confidence is a well driven Warthog. 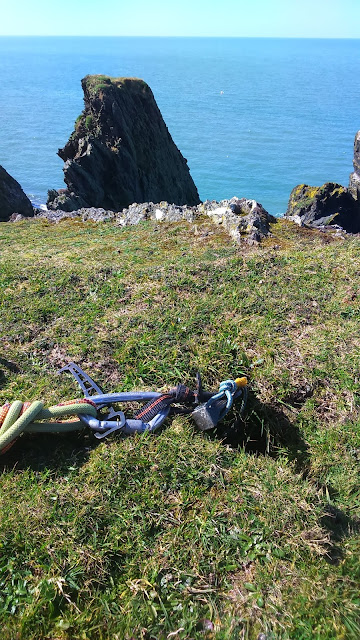 Here you can see the descent/ fang notch, and the ice axe/ rabbit hole belay. Great Route! a must for any discerning connoisseur. Any more difficult and it may have stopped being silly, any more solid and it would have been boring..

Following such a extravagant experience, we chose to cross the A499 for a very different world. Sport climbing comes to the Lleyn folks. Tyddyn Hywel quarry (next door to the trad Gyrn Ddu Quarry) was equipped last year (info on the North Wales Route Dump) and I was intrigued to see how it all fitted in. That, and after the Plonk Fin I was keen for a bolt. The parking and walk in were both discrete, subtle and aesthetically pleasing (if a little steep)/ 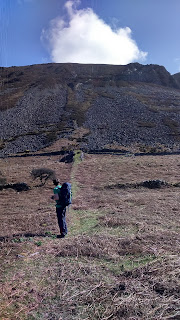 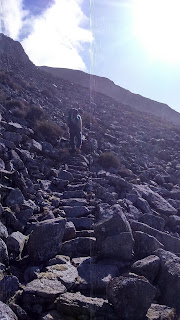 However look at these steps! 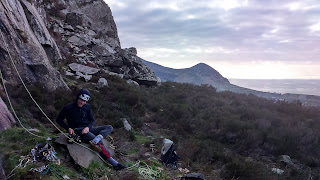 Awesome views from this crag. There is a 5c, 6a, 6b, and then a string of 6c's, all feeling quite traddy. This is in part to the architecture of the rock, and partly to do with the humour (genius?) of the equipper. The bolts are good, well placed, but not always where you think they should be (a few long quickdraws help). Nothing feels dangerous, however the routes still have a spicy aurora that fits in perfectly with the Lleyn Aesthetic. 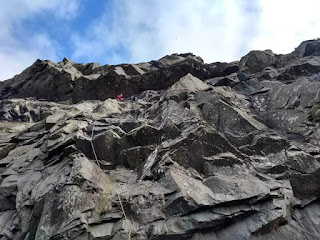 The 6b, I'm not too short, however I did have to lay one on round the first roof.. 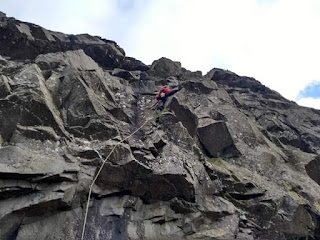 The Optimist 6c. Some proper wiggy moments and I got a little lost amongst the variations at the top. However, it was flipping brilliant! like a Tremadog E4 with bolts. I wouldn't like to be a climber caught in an unforeseen downpour though. Crux one, around the roof was intense as I had to clip mid sequence, then it ran out to the Arete, which was as good as any I've been on at Tremadog. I dithered for ages, squeezing the lichen off the holds and searching for anything foot-worthy. Once committed it was a fairly out of body experience... 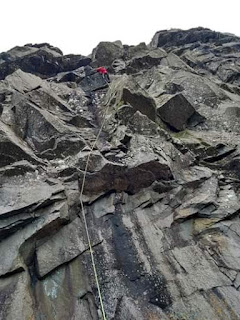 Dithering again at the second roof. Not shorty friendly. 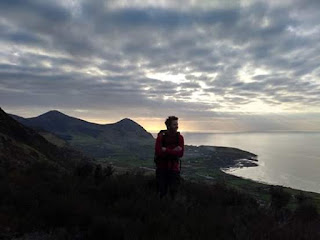 Happy at the end of the day. Best roped day I've had  in ages. Roll on Summer.