So its been well over a month since my last post. The rain has only stopped while I've been at work it seems, that and family life is as busy as ever. Having challenged myself to give more attention to the classics, Small windows of opportunity in October led to a visit to Pacman and Harris' Arete. I will admit this action was prompted by the rather wonderful brick that is NWB2. That and being rather jded with my own projects at the moment. Pacman was fun, and I managed a good tour of the ticks, with quick ascents of Pacman Arete and Karma Sutra, I found it too hot for G Spotting though. My other window in October, led me back to Harris' Arete. Last visit I'd failed to get the regular ascent, confusing it with the right hand version which requires more flexibility than I have (Still). Armed with all the Gen from NWB2, I Got it this Time! This month I've also discovered Windows Movie Maker:

The last day of October was the final window, and that was spent with the tribe. We headed off for a proper stomp round Nant Gwrtheyrn. 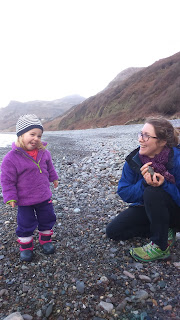 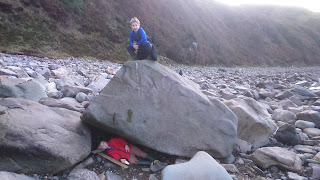 Whereas Logan used them to squash his brother..

At the end of the beach we forged up a path of sorts, and quested through the fields to regain the big loop path.. 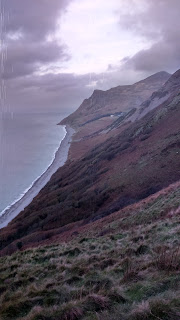 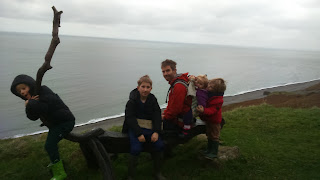 The Tribe at the viewing bench

In an effort not to waste all the height gained,we cut through the quarries for the last bit 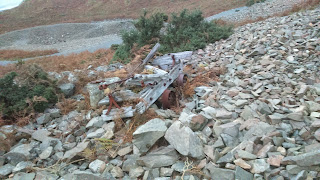 November saw the start of more promising weather, getting colder and drier.  Work has got more physical, with route and boulder setting for the winter aggregates, and I was keen to test my progress. Another funny thing about the arrival of NWB2 was that you found out about what all the other esoteric boulderists have been up to. Turns out a lot of my cwmfynnon exploits had been visited, and my work mate Max had a pad party at the Shard Project, not knowing about my previous efforts. The boys did good too, making it to the big ledge, choking only on the committing top out. I felt obligated to have another go at getting the FA, and quizzed max about the difficulties to the ledge. Reassured it was only about 6C to there with a dynamic approach, I packed two pads and my abb kit, and stomped back into the bowl.

Needless to say the Shard project won't be a 6C... after some despondent thrashing around on a grigri, I decided to cut my losses and visit pacman instead for another go at G spotting. Packing up the ropes on top, I observed a promising rock further up the slope. Convinced it would turn out to be disappointing, I trudged up to confirm this. It was, and rather than trashing back the way I came, I sought a different struggle back. Promptly staggering into a hidden pit.

...And in the pit was this beauty:

Just goes to show there's treasure everywhere; perfect dragon hide dolerite, suitably steep, suitably high. I left the block more content than I've felt in a long time. I'm still intending to lay siege to some classics this winter, but its good to know there's still a few FA's left in me yet. Not the shard though, I've given that to Max.