Well I guess I should start with the most significant news of March: 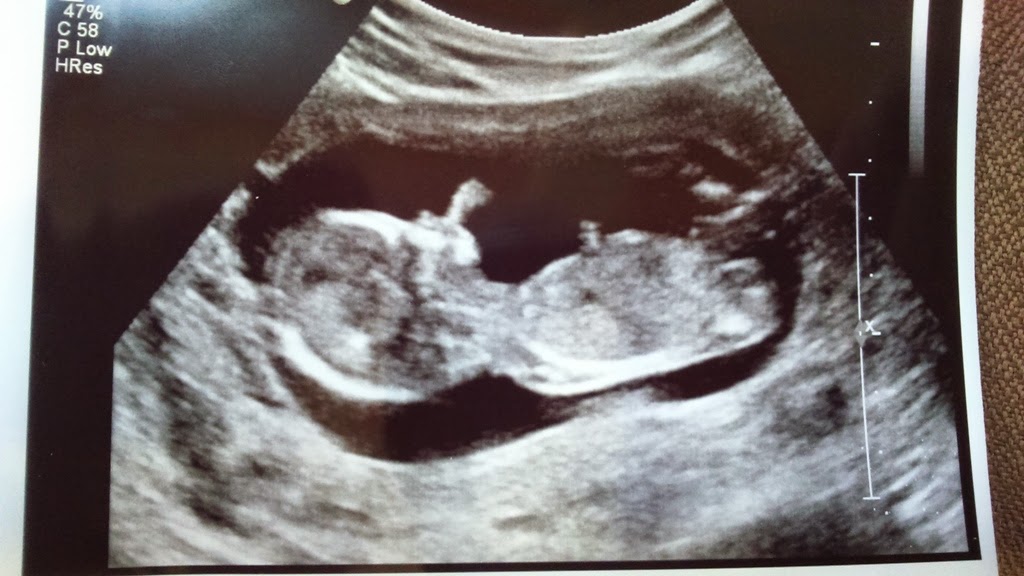 The scans have confirmed that No. 4 is not No. 4, 5 & 6... Sam's been wanting another one for a long time now, but after the Twins rocked our world, I was keen to wait until the boys were all in school full time. Super psyched as (shock horror) kids are cooler than climbing..
This has meant while Sam has been in the knackered, nauseous, and ...Irritable stage, my adventures have been curtailed to 4hrs each Monday and Friday morning. Now if the Welsh weather is not cooperating, then I get a little crabby myself. Its due in September so this will have to be factored into the planning, there will be a sweet spot in the summer where most success can be had.

First of the months adventures was a trip up to the Marchlyn Grit. Yep, seems the pillar's of Elidir are some upturned seabed, so its sedimentary folks. 34 mins up with pad and scooter. I used a bit of patio improvement to use as a warm up, its almost a one pad venue now. Sent the Tumbleweed stand and moved into trying to work the sitter. Remember the Welsh weather, and those limited windows of opportunity? well I went up in the spotting drizzle, which turned out to be snow at the boulder (the joys of 600m) this meant the easier warm ups were collecting snow and wet. Attempts on the direct sit were informative but ultimately useless, as while I did manage to get my bones off the ground, my flesh was still sat on the deck. It is quite hard, and involves core, opposition and compression off slopers. exposing new weaknesses to work on, and reminding me of old ones; namely marginal slopers.

It took 8-9 mins to get down with a pad on my back, but Logan's scooter took a battering in the process. I'd melted through the flimsy brake, and this had grooved the back wheel... Off to Ebay for some upgrades.. it was certainly fun pimping his ride.. 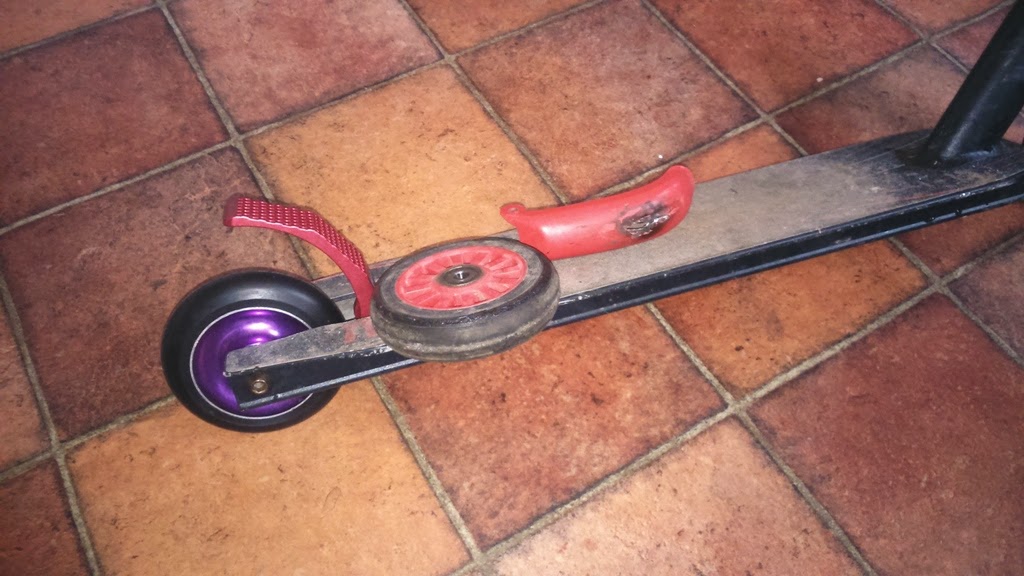 But I couldn't keep hammering his scooter, so I bought my own! 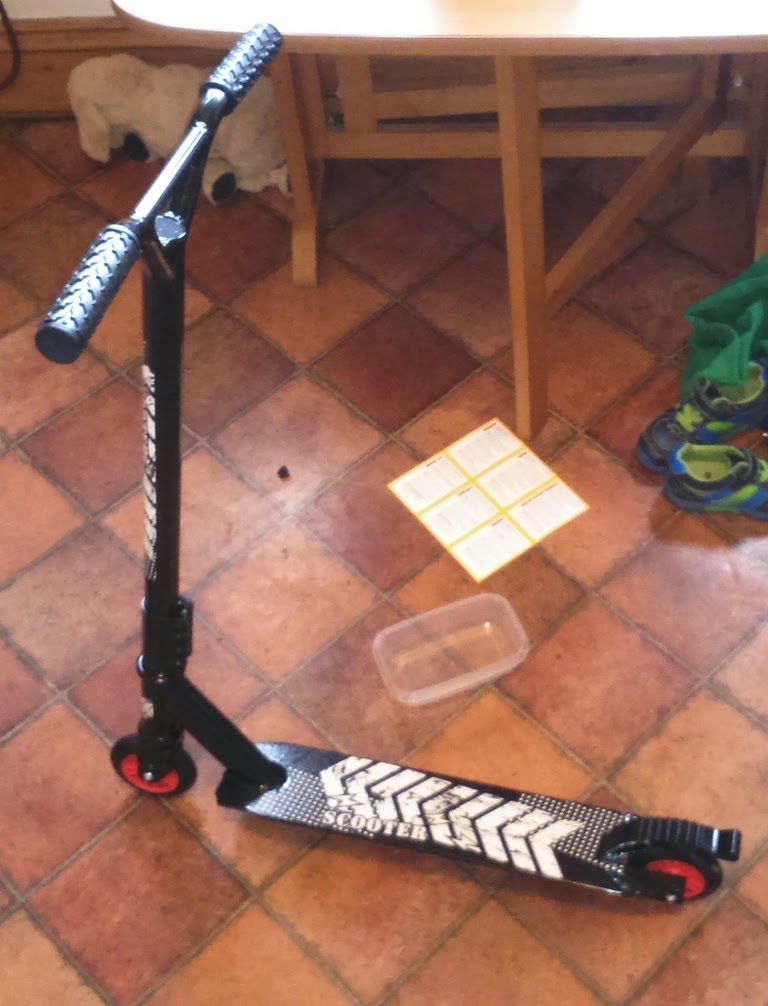 The pimping bug still lingered, because I'd bought a budget model, and it was ace apart from the wobbly cheap headset. One upgrade later, not only had I learnt to replace a headset(using the freezer and a wooden mallet), but my scooter was smoking... Only 2.8 kg too. I can see that in a years time it may have few original parts, but like my grandfathers axe it will still be my old scooter...

The other events of the month was physio. I have passed up the chain, and now have a punishing regime to follow, made worse by my current golfer's elbow. I'm having to leave the core workout I've been promising myself until they've got a handle on my back issues, so no more progress at Marchlyn for a while (but some team trips may occur to clean up satellites). and I've been sacking off actual climbing until my elbows are under control.

So the Next Month:
between body limitations and most of the month being the Easter hols, I'm limiting myself to three targets next month.

Tosheroon - There's a tide window lining up with my prescribed playtime on the 24th of April.

Non Climbing exploring - the Llugwy reservoir road needs the scooter test, and there might be some little gems left beyond the reservoir. I'm also doing some Clegir tours.

Twll Mawr - I'm super psyched to get this project done, especially as more sport has popped up on the back wall.

Things have been a bit tricky this month, between the weather, work, life and physio. Golfer elbow, and a need to knock off the core training whilst the physio sorts out my hips and back, has meant I've had to rein in my desires for hard ticks, or much climbing at all really. More in the end of month report, but for now, did I let it get me down?

Hell no, I went for a walk!

Those that know me will understand its a little out of character, but as most of my recent bouldering has been above 600m, where there's a will there's a way. Last Friday's mision was to resolve some queries over various sightings in Cwm Uchaf. These were Giveaway projects for July '13, August '13, and December '13. Basically, a walk up there fired me with ideas based on rocks that were far away, and I was going to try and get something more concrete. 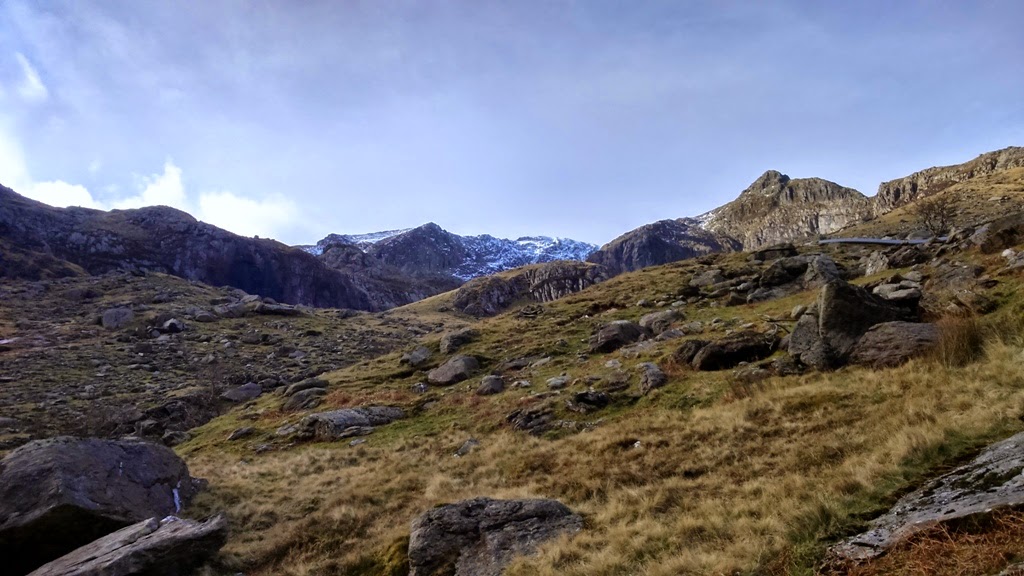 Looking up the hill, bit snowy up there 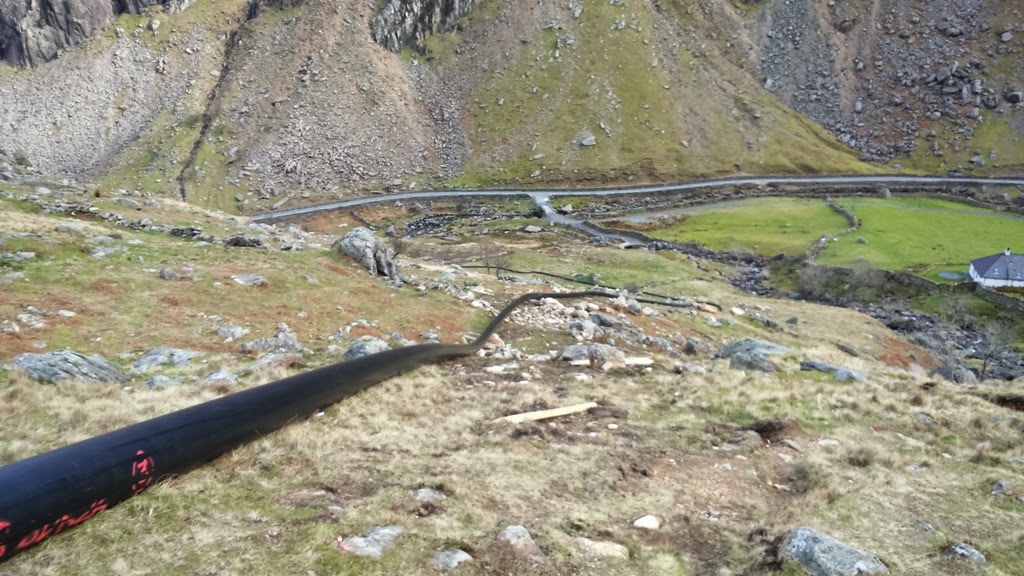 Looking down the new ugly hydroelectric pipe, shouldn't they be burying this? Some nice looking boulders level with the base of the Skull etc. I'm sure they've been prospected before? 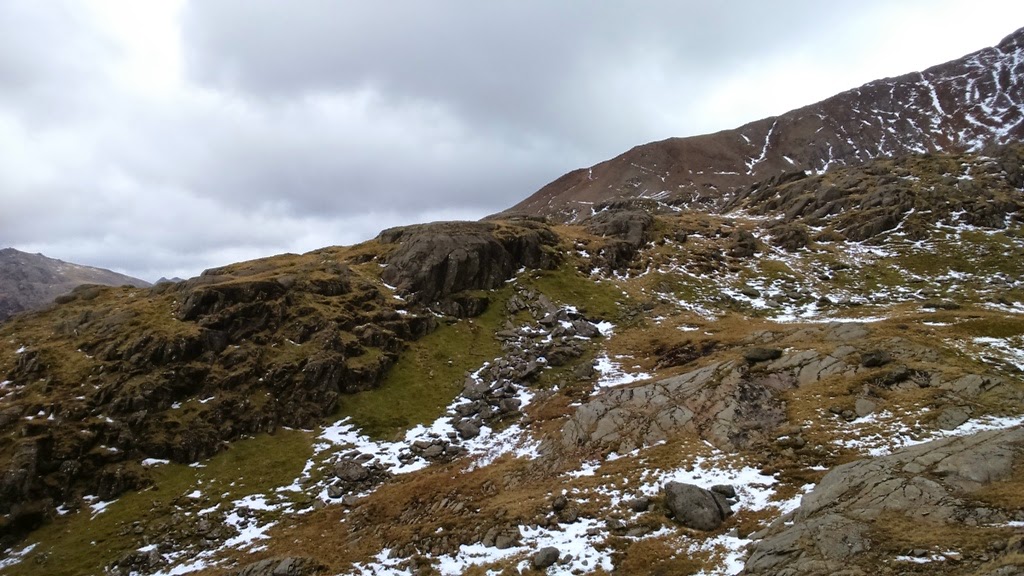 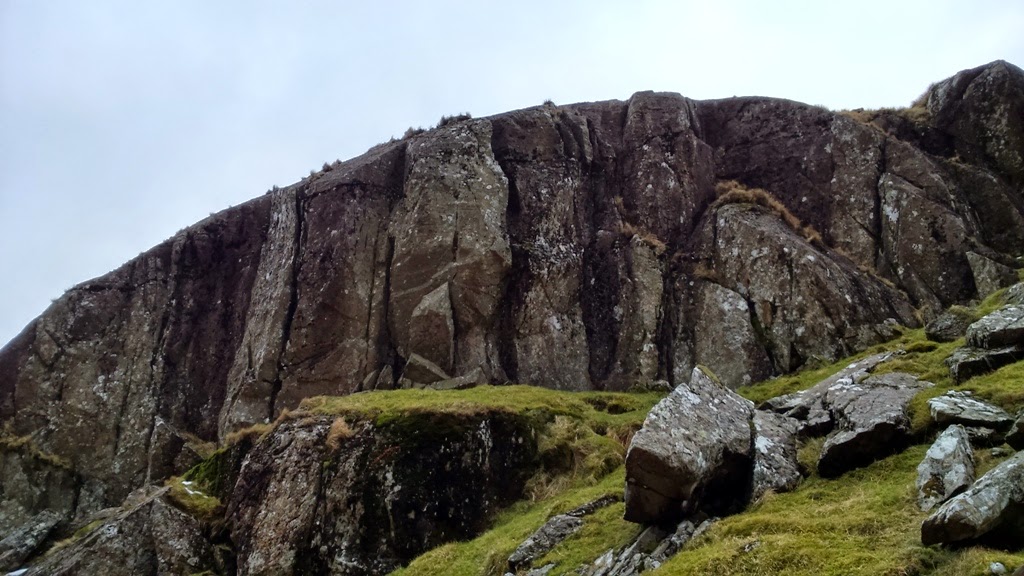 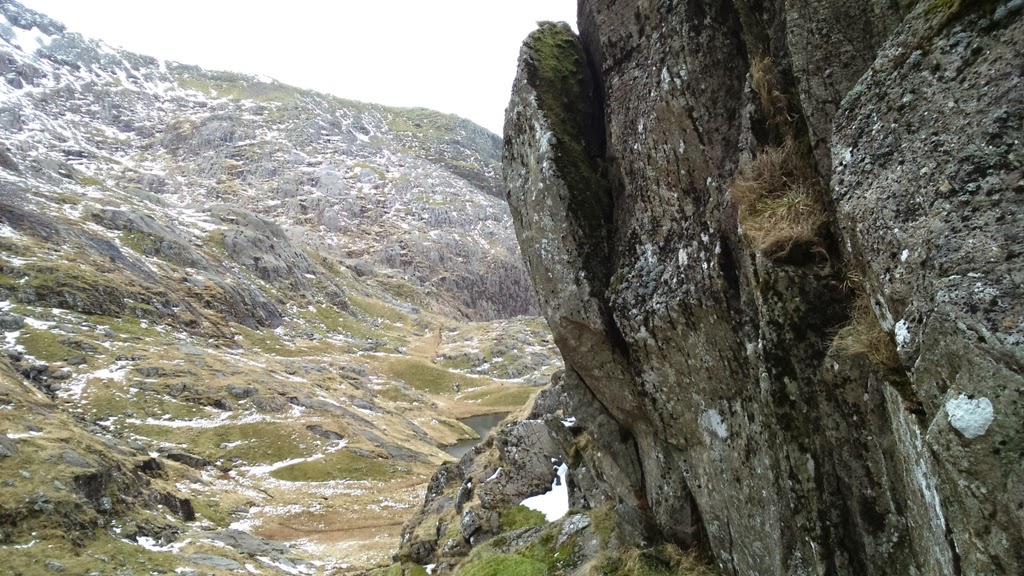 Did I mention small? bit dirty too. 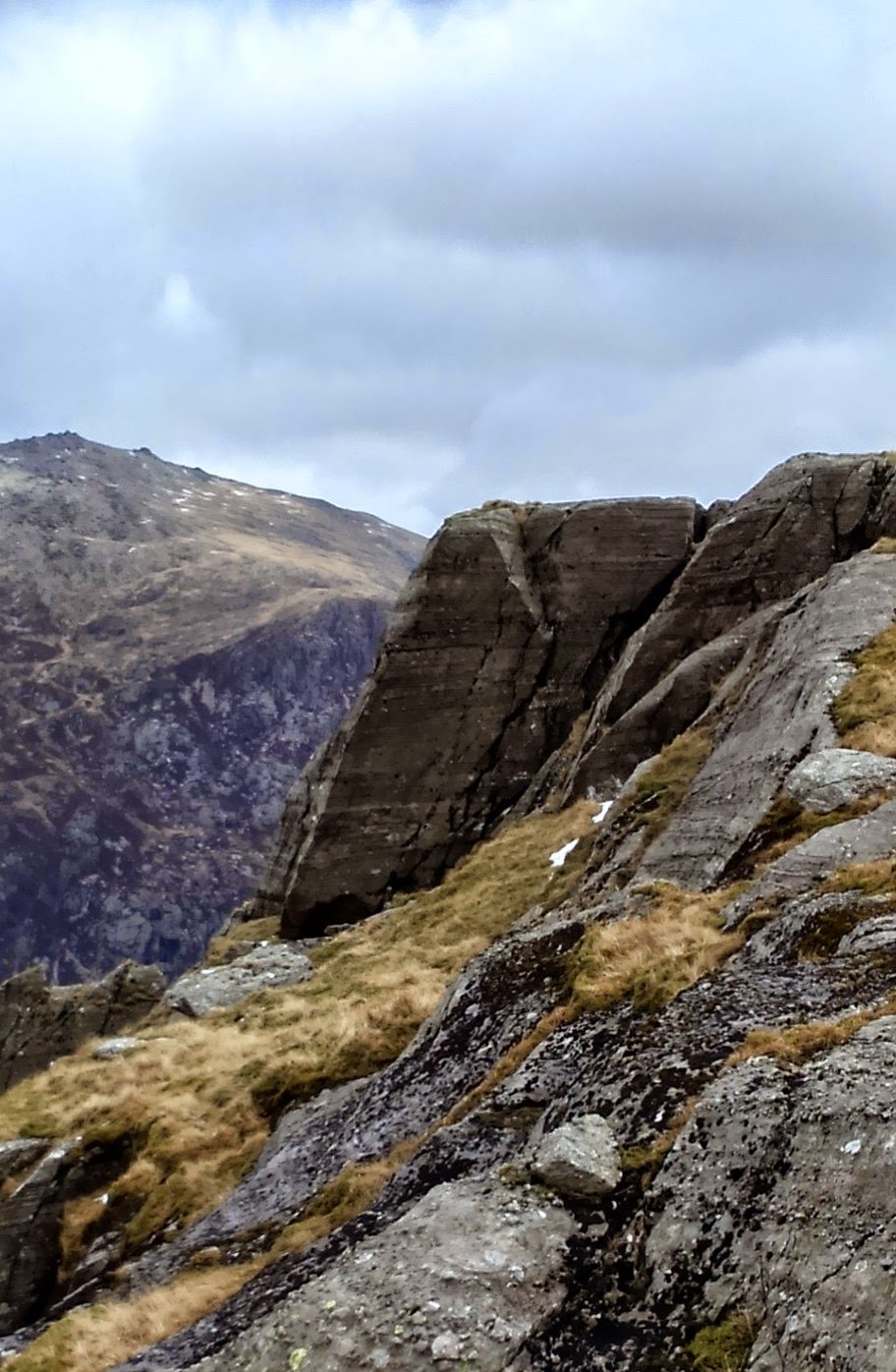 Augusts giveway, clean and good climbing, only small, barely highball, and a bit to easy to warrant it. as for December's giveaway, the jury is still out as it was too high and snowy. Definately one to scope from Crib Goch, might make a sherpa trip and combine it with a Llechog descent and shufty. Might need to breakout a map for that one... 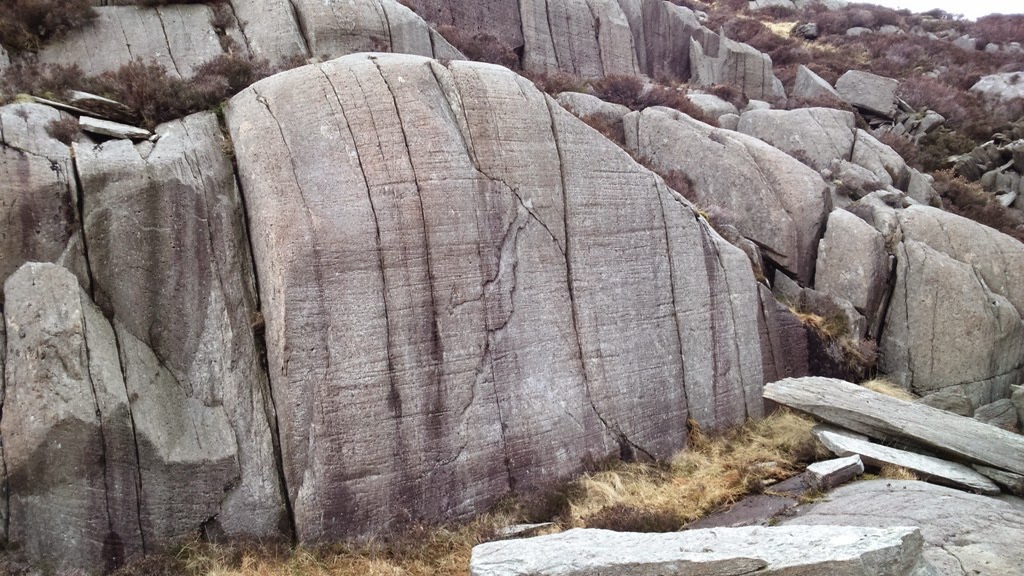 Not all grey skies. Another bloc found to join the Dinas Mot Summit Boulders. Almost enough up here to tempt a pad trip, although I reckon a good spotter could make padless attempts possible, and therefore tempt a route boulder combo. 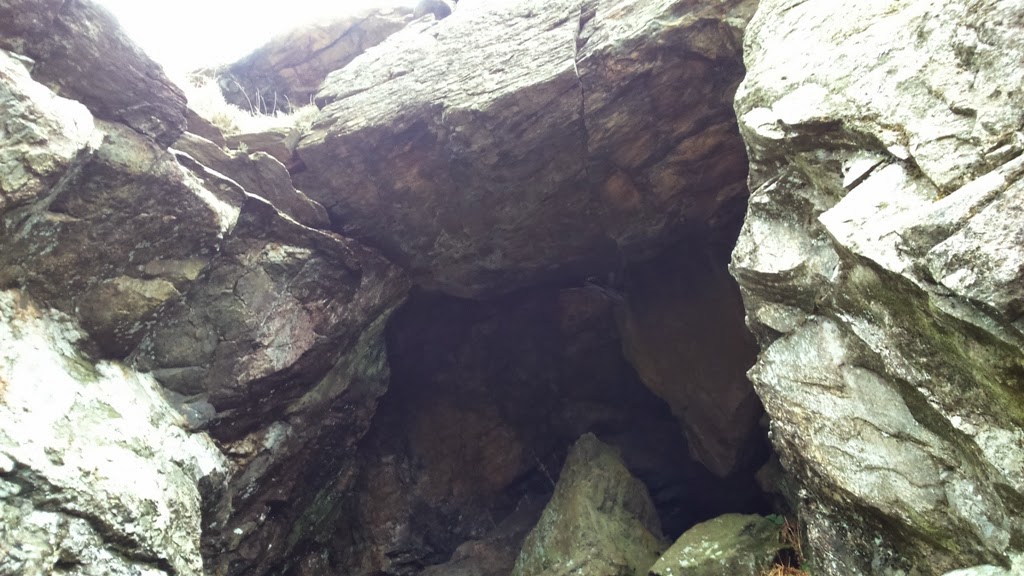 Found this cave above the Hall of the Mountain king on my descent. paddable and lighter than that cave but maybe not quite as class.

So tick 14 remains elusive and kind of fills the A.N. Other spot. Two new things on my radar that may fill that hole, one involves my new scooter (more in the March report) the other I spotted on this jaunt: 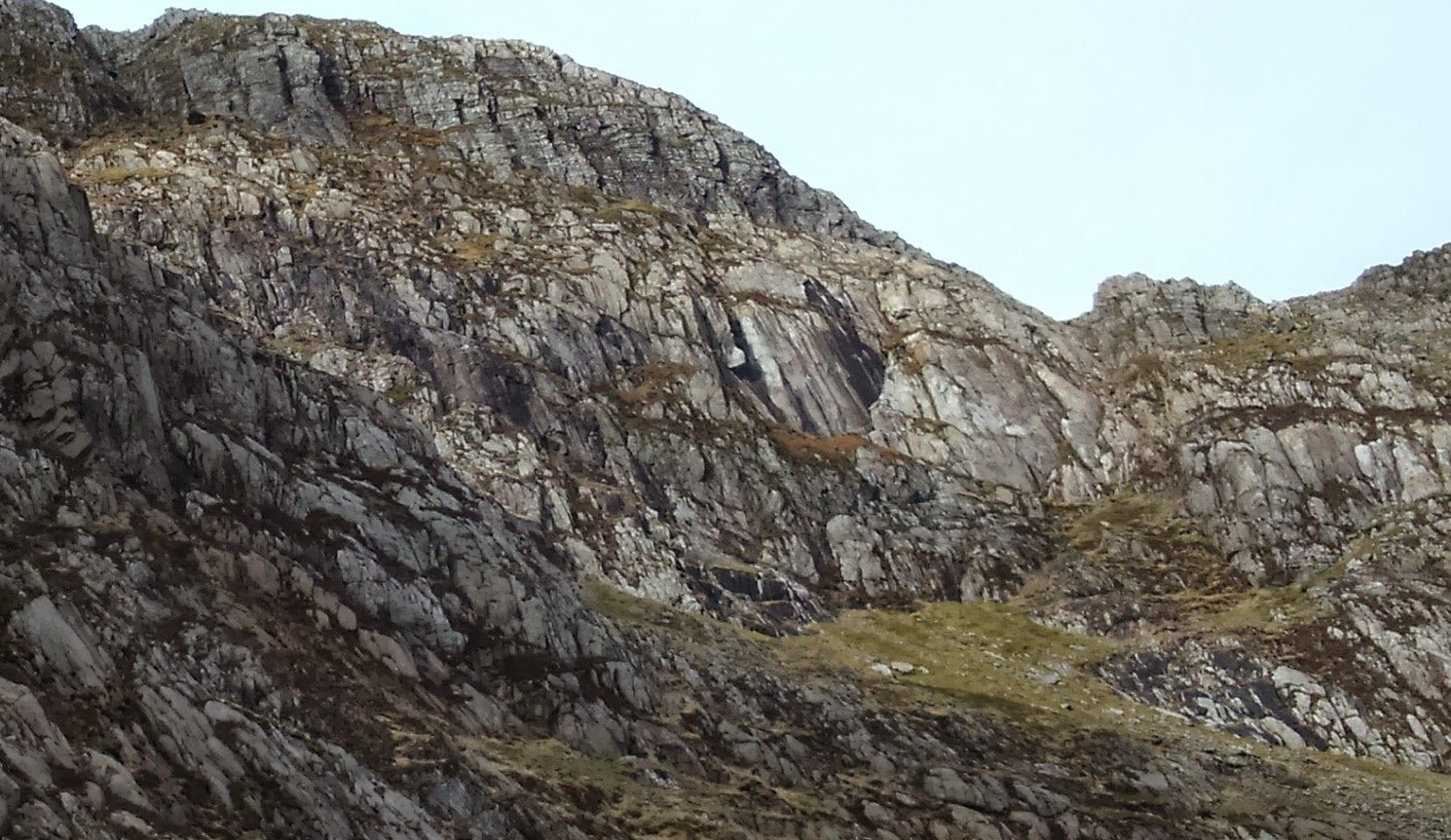 In the centre of your screens is a big mahooosive roof, just left of Alchemy et al on Equator Walls. No further info as yet, but investigations are underway (I've texted Big G)

With projects like the Cube becoming more reliant on group management, I was keen in my remaining small windows of opportunity to develop stuff I can get psyched for solo trips.
Thus I chose to bite the bullet, and venture back to Marchlyn Mawr to construct a more managable landing. That and try out Logan's scooter from the top of the dam road..... 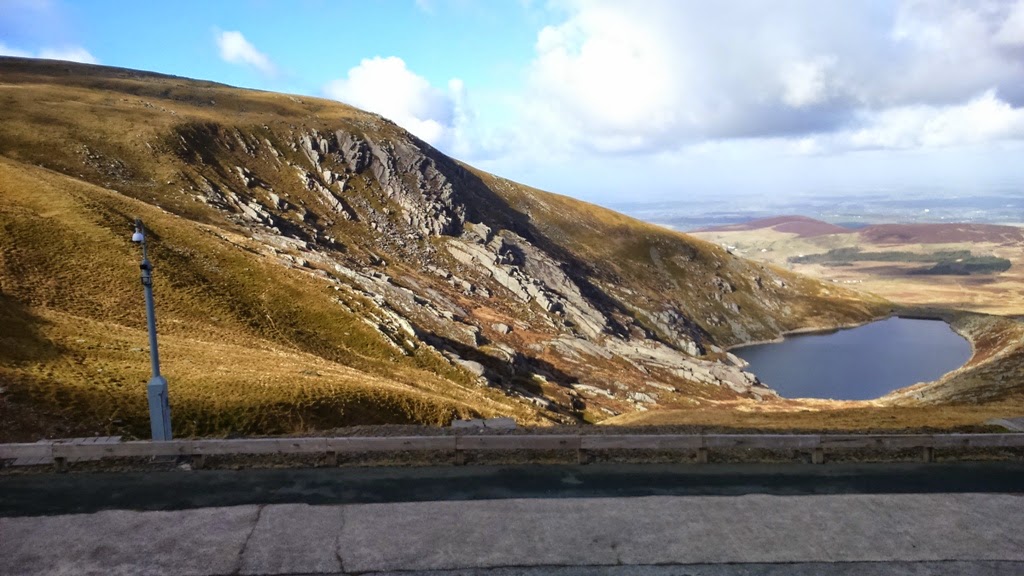 Marchlyn Bach lit up nicely, the ribs are all much of a muchness, but the end stubs in shadow often give some bouldering potential. There's also a groove and arete high up on the left worth seeking. 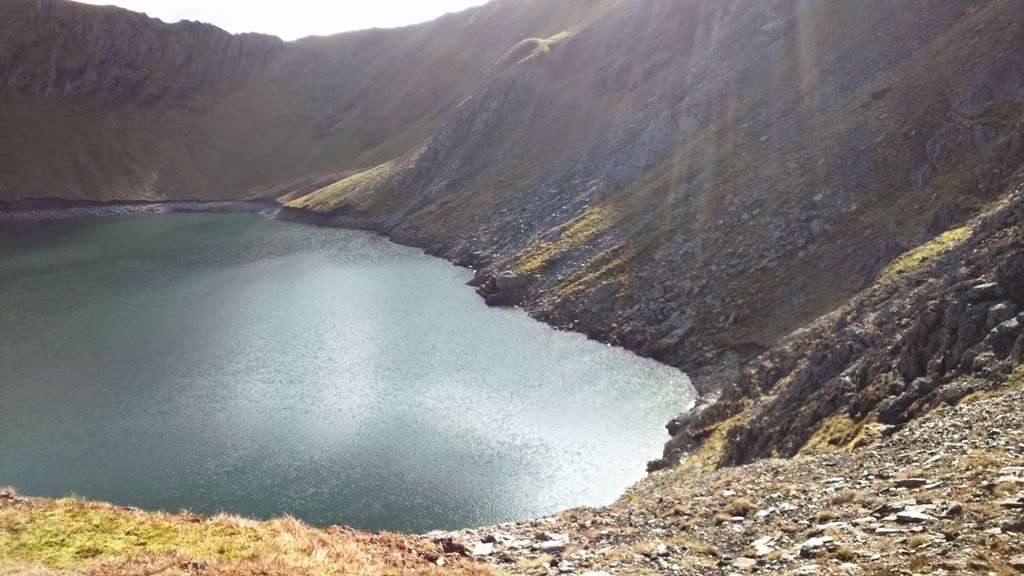 34 mins up and I was astonished to find the boulder in Sun (tardy time, must do better) 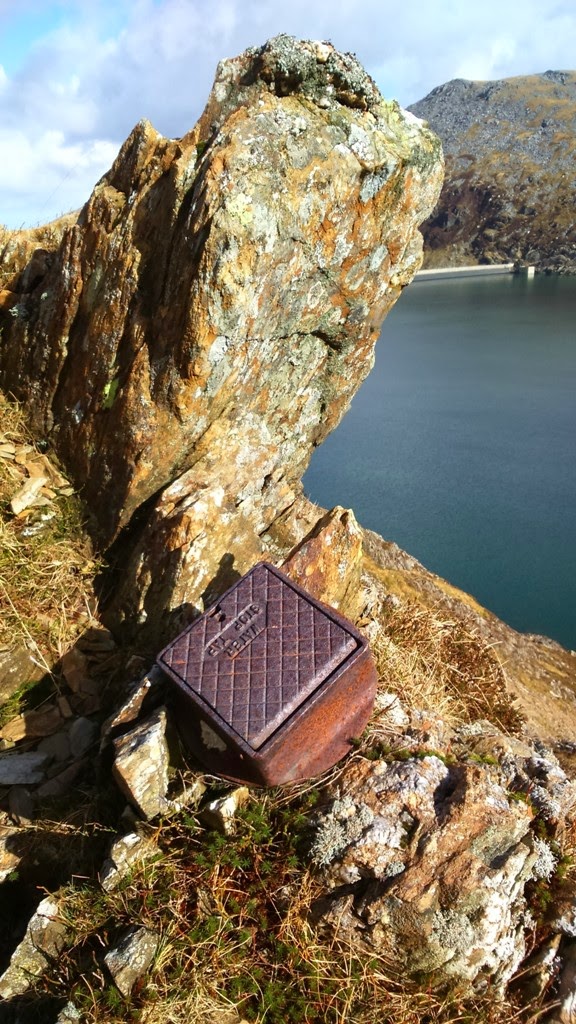 My new boulder approach takes in this random erratic deposit 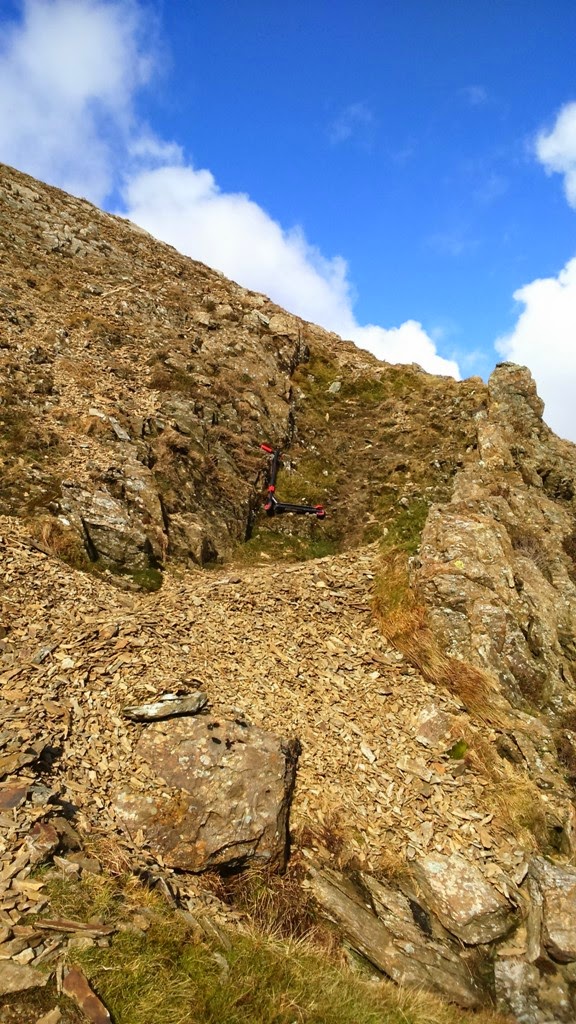 The Bike shed, I didn't feel the need to drag it all the way to the boulder.. 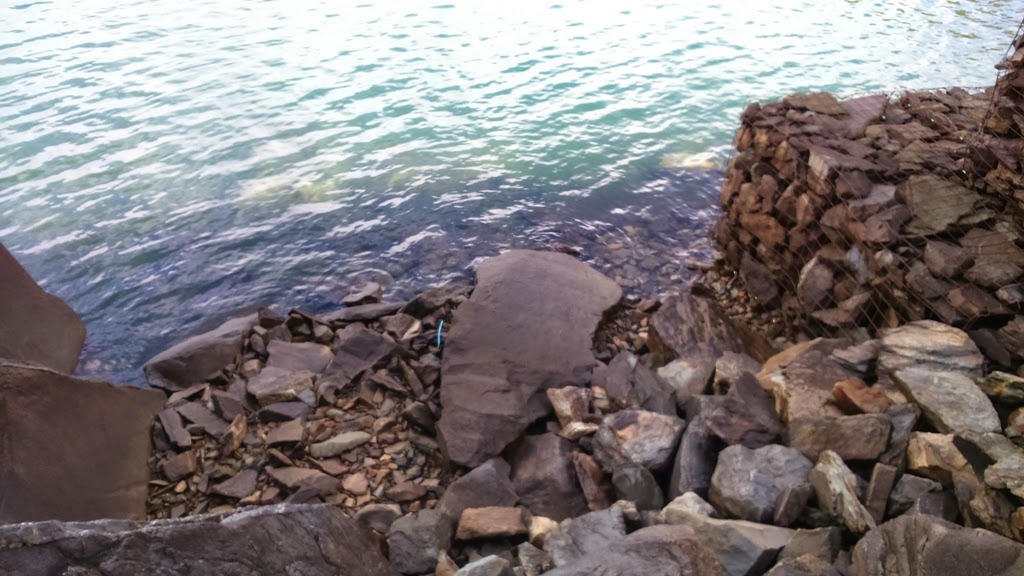 I arrived to find the tide in. Those wishing to boulder here, had better wait until after the breakfast leccy demand to let the boulder dry out. It must be lapping on it around 5 or 6 in the morning... 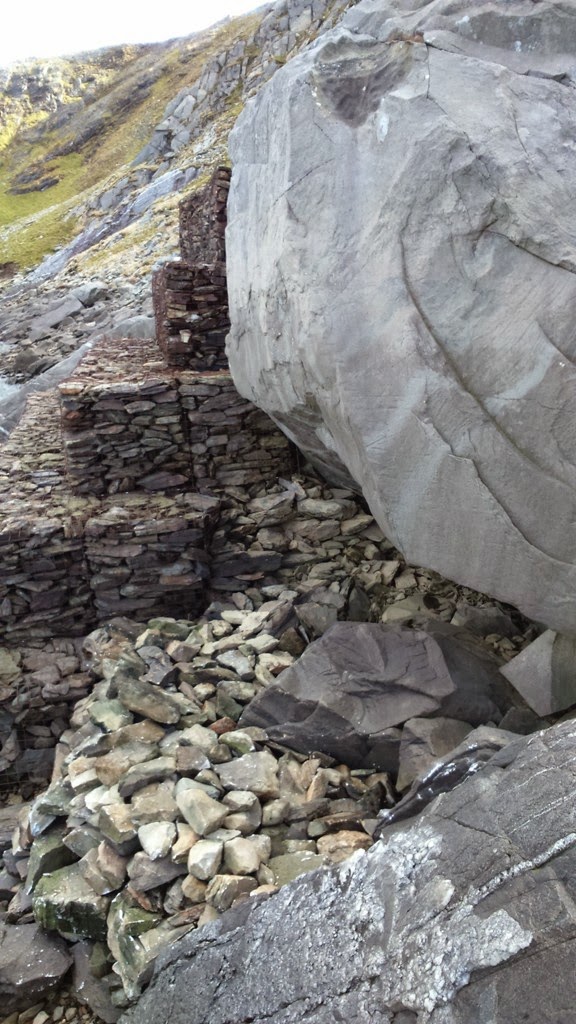 So I arrived at 11 and by home time at 2ish, my patio / retaining wall was certainly looking adequate. Very satisfying. Another foot of height and it could even be a 1 pad venue, but I was pretty knackered  by it today. I can see why there's a fair bit of crossover between drystone walling and uber wad climbing. I may also have found a sequence to join the Tumbleweed finish from below, creating a super tick.
Watch this space...

...Oops, almost forgot the ride back. 10 minutes Dam to Car, no wipeouts or wimp outs but stood on the brake a fair bit, certainly room for improvement. Thought I was going to melt my shoe at one point, but no damage done, although the hollow deck and mudguard brake did mean I filled up with gravel....