Boom! Back in my happy place!

Basically there's few things that can balance me out quite like completing a project.

Wolf came with me today on a rush mission before Wales started to dissolve..

This is Craig y Giat; a crag I named and developed in 2003. On the map its Bwlch y Dinas but there are a variety of scrappy crags in this trough, and this one is a bit alright (and has a gate). 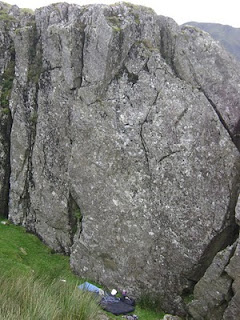 Direct up the middle to the hanging crack is Desire is Repressed Fire which I originally led with a friend 2 in the pocket to the right at E2 6a, but makes a good V2 highball. Above the rock on the right is Sharks Patrol these Waters, again led at E3 6a but V3 in pad speak, as long as a spotter's perched on the rock. The crag is bound on the left by Chemistry Crack, given VS by us but always soloed without pads, and involving some nifty arm bar work.
The area to the right of Chemistry Crack, between the dark patch and the ledge is now Its not the Years, Its the Mileage an 8m V6. I first pulled on in 2003, having glimpsed the glimmer of a line, a gosamer of possibility threading up the wall from an obvious side pull just in from the arete. The problem was, although it definately existed, grasping it was like capturing a golden snitch made of razor blades. After a clean, ground up efforts were applied, tips ripped, and hair pulled out. Basically back then my fingers were strong, but my core was flaccid, and my feet were therefore not being effective enough at taking the weight off my skin, hence the rippage. 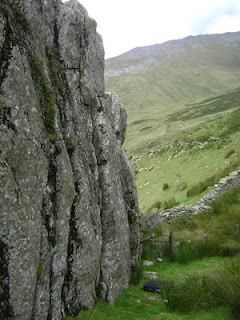 Fast forward to my birthday this year and I finally got past this: 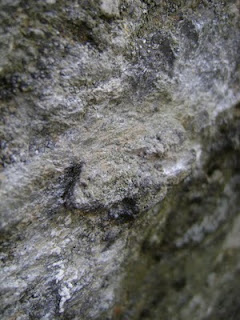 The Biro hold is rather like holding the pointy end of a biro and using your thumb to gaston off the ball. This obvious masochism is eased by the equvilent of tape jamming gloves: 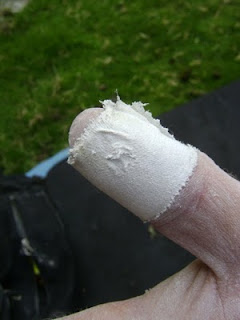 Roll on the Beast

Big thanks to Wolf and Cinder the woof, who trudged all the way up this near vertical sea of sedge grass and got to pull on only once before the heavens opened... I owe you a crack at something out the shed

The Beast in me

The beast in me

I am currently defeated without ever returning to the Beast project. Its got into my mind "too hard... too hard" and I'm at a loss to disagree. This could be because the kids have limited my sleep to 5 hours a night for the last 4-5 days. It could be my cold. It could be the fact that I only get to climb outside once or twice a month despite living by the best climbing in Gods own country.

What would Mark Twight say?

Better still, what would Johnny say?