Before the Word, there was the Tube(s)

So in my quest for retro pleasures, and to escape the heat, I enticed Phil and Emma down to the Tubes. This esoteric, frankly hardcore esoteric,  venue is situated just upstream from Betws y Coed.  developed in the 90's by the great and good of "the scene " it has mouldered in relative obscurity,  banished to the meirionedd guide and a brief mention in Boulder Britain.
The Upper Tubes are the ultimate gentlemens venue,  it only comes in to season when everything else is too hot, and lends itself to intellectual top roping,  and splashing about.
The first issue was remembering how I last got to it 13 or so years ago. Then convincing the others that it was "straightforward ".
However,  a small pine forest appears to have grown making pathfinding interesting.  Suffice to say, my premature attempts to enter the gorge were fairly exciting.  It's also probably a good point to suggest a new approach from a third of the way up the crash barrier is equally "easy". 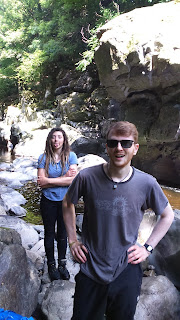 The team safely down the awkward ramp. This was the only pic I took, Emma's waterproof camera went into action after this. After using her non waterproof phone for our first ( and only successful)  challenge ; Inner Tube- a Paul Pritchard T1 (no normal grades here). However,  she has since dropped that one in the sea, so no awesome pictures of climbing fully enclosed Tubes, here. Or the Monkey Skull. Inner Tube involves a downclimb,  a traverse,  and ascending an enclosed tube. This makes top roping logistics really fun.
The Tubes are water polished slate, and therefore everything is about directional pressure.  That and falling off. 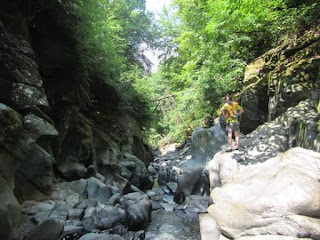 Exploring downstream.  At this stage we were quite keen to stay dry, and thus progress was slow. 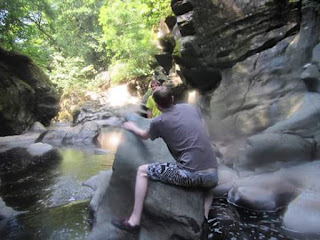 Phil staying dry. Our target was the Barbara Hepworth area, which has a dooable T2. However,  we got sucked into trying Original Route,  a Crispin Waddy T1. My rigging ability was sorely tested with my blinkered approach leading me up an xs style approach rather than the way round the back they all tell you about. The results was an offset and friction full top rope.  I trusted my belayer to adapt and set off.. 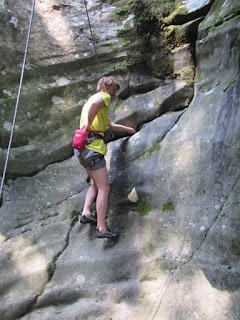 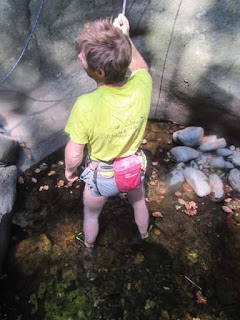 My belayer made a slight misjudgement of slack, however it was warm enough to at least dry the rubber on my shoes for subsequent attempts. 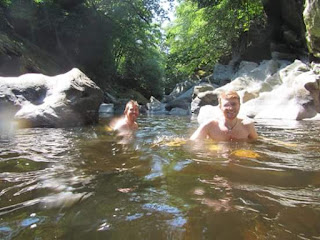 Once we had our fill of gentlemanly pursuits,  we took to the water. More hilarity ensued,  as the tanin stained waters hid all obstacles.  Combined with subriverine Tubes meant that the water randomly changed depth from 2cm to 5m. 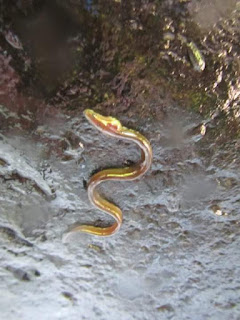 Eels trying to climb around the cascades. I can't recommend the Tubes highly enough.  However, like the eel, don't expect to win much,  but enjoy the struggle.