This weekend I had two contrasting sessions on the smaller stones. The weather was mint and my glorious better half sent me off to play (both times phoning to tell me I could extend my sessions) Sunday I shot off up the pass, to crawl back down until a parking spot appeared at the Grochan.
I just missed the crew I was meeting up with and had to set my own agenda.
Not being much of a cromlech boy and lacking the Energy (too many nights of baby noise) to troupe up to the wavelength relaxitude, I turned my attention to Ynys etws and the established "classic" Roof's of Boyson and Crook.
Did Boyson with effort, and couldn't Suss the Crook.
A bit deflated I realised I could no longer Be Bothered and headed down to Fishskin wall as it was officially too hard for me but didn't feel it (Unlike Crook's which should have gone but wouldn't budge). Felt too hard again, but only just, and went exploring again instead, Trainering up a delightful V0 Highball slab that should be a classic but will merely remain a pulse-racing memory (I forgot to do up my shoes... Nuff said)
Contrast this with Monday.
A short cycle lead me to the Erratic (Logan had passed on the glory of first dibs, instead preferring Something Special instead). I have been attempting its circumnavigation, something which has seemed desperate in the past.
This being the first visit in more than a year I spent time re familiarising myself with its quirks, quartz being very quirky, and started re linking sections. The desperate sections started to feel simply hard, and I left having reduced it to two blocks (the climbing not the erratic).
So Sunday I was in catch up mode, turning an initial disappointment into something worthwhile. I was pitting myself against an established bar and coming short, and the best bit was being scared witless in the wilderness entering the unknown. Monday, I had no preconceived goals, just setting out for a Rubik's session, and every step was a success.
The lesson of the tale, seems to be; when your ego is fragile, new routing is always best!
Watch this space...
Posted by HoseyB at 12:11 No comments:

Giveaway project of the Month - February and March

February got a bit mad, with training being replaced by hard graft at work. To reward your patience, here are a couple of Piccies I was keeping to myself. Craig y Llam is the home of 2 routes, a lot of unclimbed rock, and one previous Giveaway. the downside is that the unclimbed rock is probably best approched by boatand has a summer bird ban. It has therefore been ignored in rock rich North Wales. The upside is that its solid, futuristic and extensive. 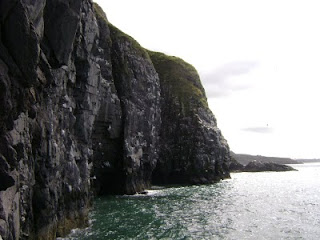 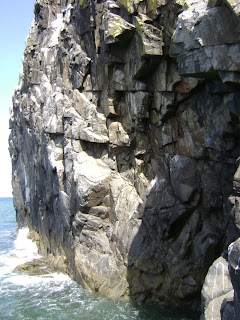 This wall is smooth, steep, and has a platform at low tide.
There are loads more features and lines, mainly one pitch of rock to one of scrambling, but high adventure none the less.
enjoy