So the long term trundle project. Took a bit of effort to get myself there this month as who wants to dig a hole? However, once there I realised that I do like this sort of sillieness, I don't know if its the physical labour, the absurdity, or the promise of something worthwhile on the horizon. 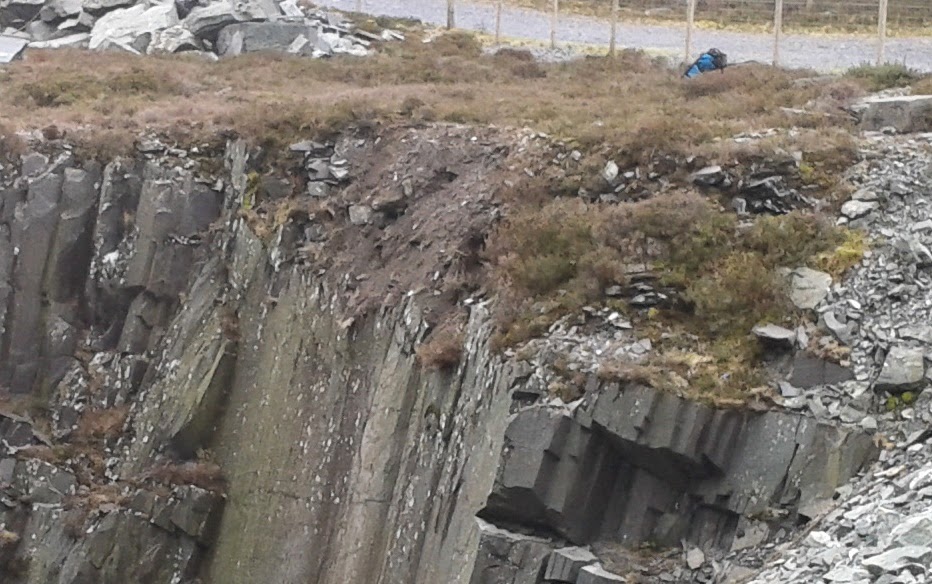 This was the first attempt at reducing the death hat and bring in a more thank god top out. This was the result of 1-2 hours with a spade, minimum chat, but copious tea. 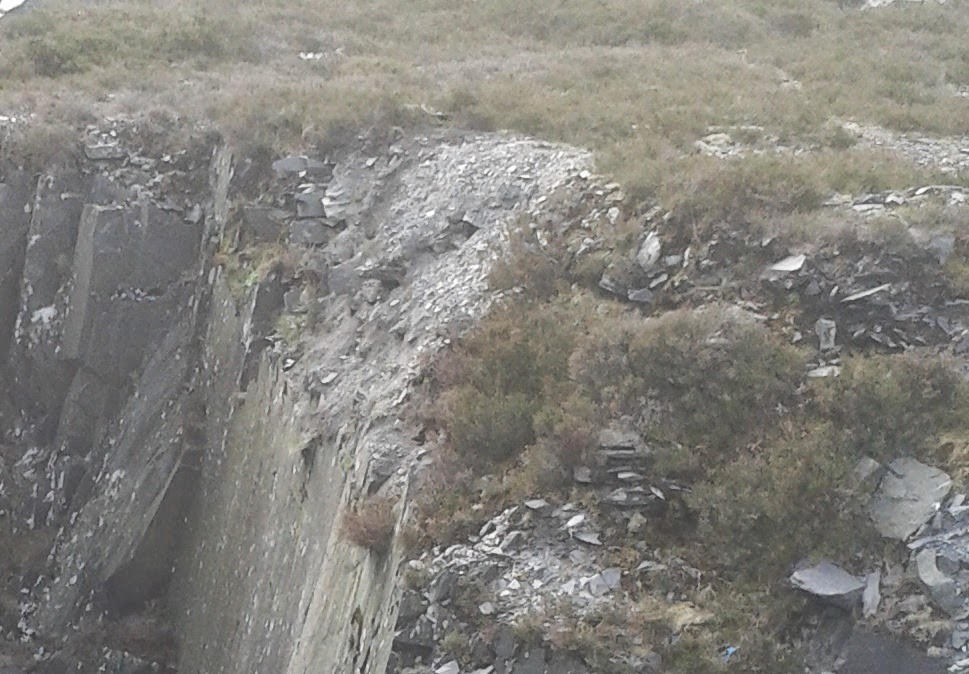 This is what it looked like one month later. Obviously the hordes of well wishers and collaborators were unable to make much of a dent, nor was the rain. Looks like this continues to be my own particular windmill.
This visit I abandoned the spade in favour of the Fork and poking it a bit with me hands.
This is the results of my allotted hour (had to back for Dad stuff). Less tea drinking but more chin wagging this time (Dog walkers, slackliners and Ian off to work project #99998): 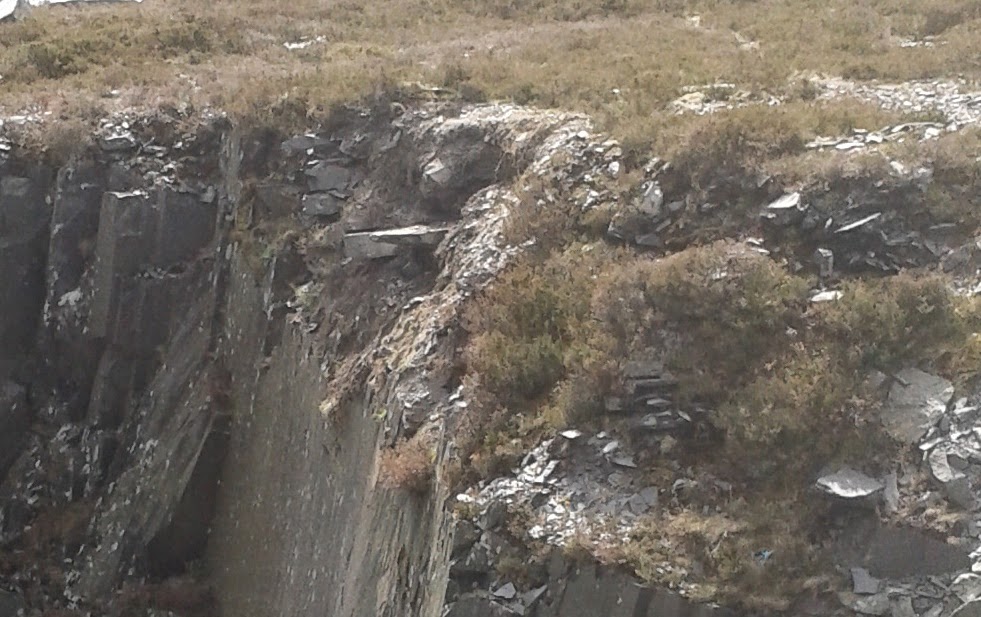 This method certainly seems a winner as I'm almost down to the top of the wall. The plan is to start with a narrow channel down to the edge at a sensible angle, and fan it out to give an easy escape route that produces minimal rubbernecking.

Beginning to get excited.
Posted by HoseyB at 13:59 No comments:

Having spent so much time in the angularity of slate quarries, I took the opportunity to explore the quarry at Trefor during my visit last month (while waiting for the tide to drop). My Great Grandfather was from Trefor, and worked for a time in this quarry. Although I felt no connection here, it was interesting juxtaposing it with my experiences from the Slate quarries. These quarries are still active, although only on a very small scale. 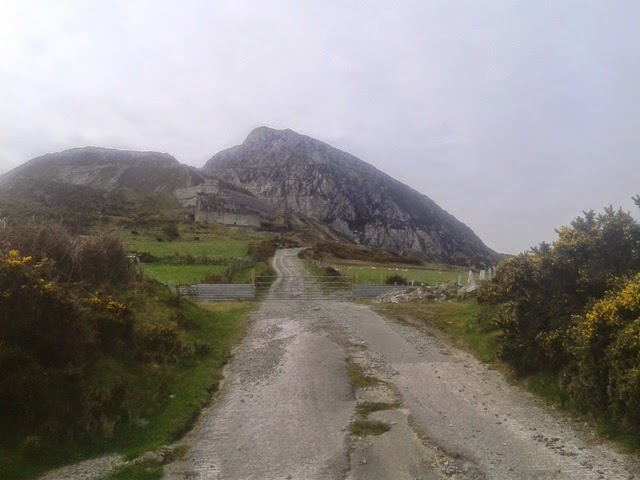 The walk up. (brisk) 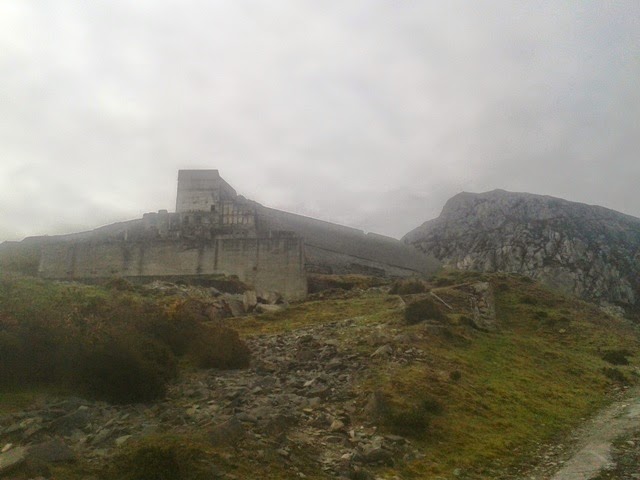 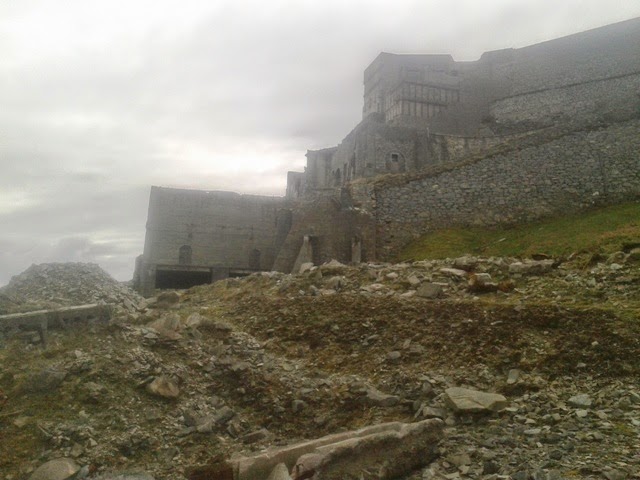 The first major difference with the Slate quarries, the derelict buildings are less middle earth, more Stalag 13; austere, and multi levelled, I didn't have time this visit to venture inside.. 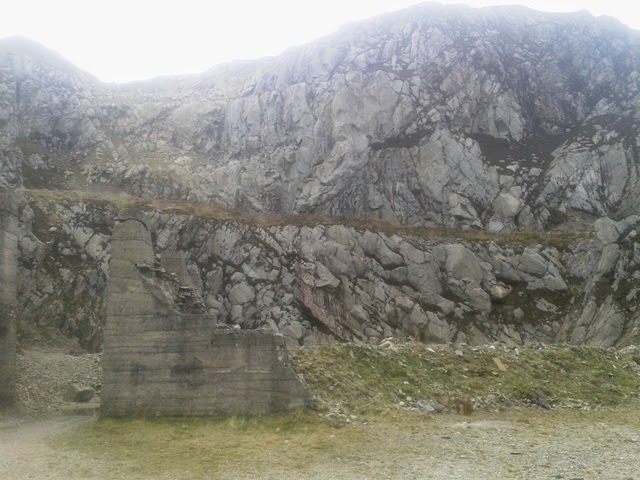 The quarries themselves, are generally ragbag and chossy, although I've seen pictures of more continuous walls in the upper levels, and there are some routes in the quarry at the top of Avernus. The Quarrying method seemed to be:
A)Blow it Up
B) Drag out the big bits
C) Cut up the big bits 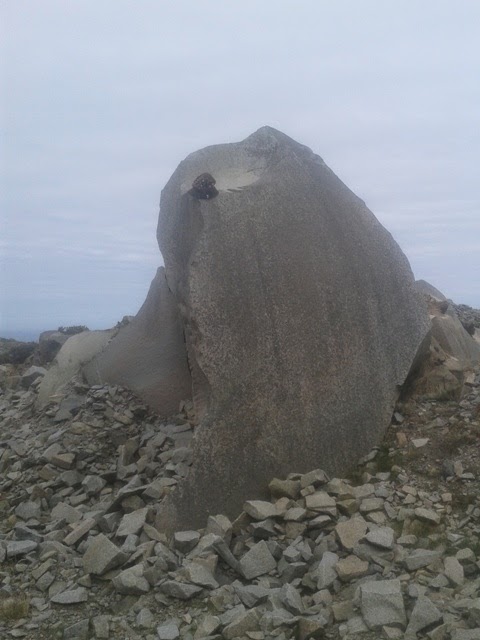 One of the big bits that seems to be avoiding being cut up, beautiful texture, but in need of a little patioing. 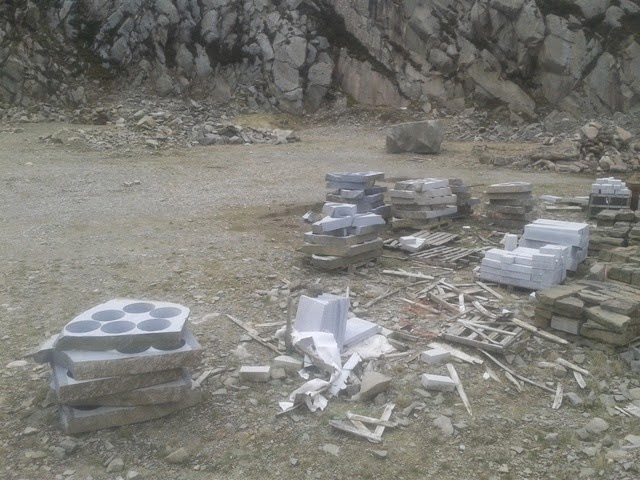 The modern Quarryman. The Stone is primarily sought for Top End (Olympic) Curling Stones. Although there was also a little dressed stone. No new blasting of the faces occurs, but those loose blocks that exist are levered off  into the pile as needed 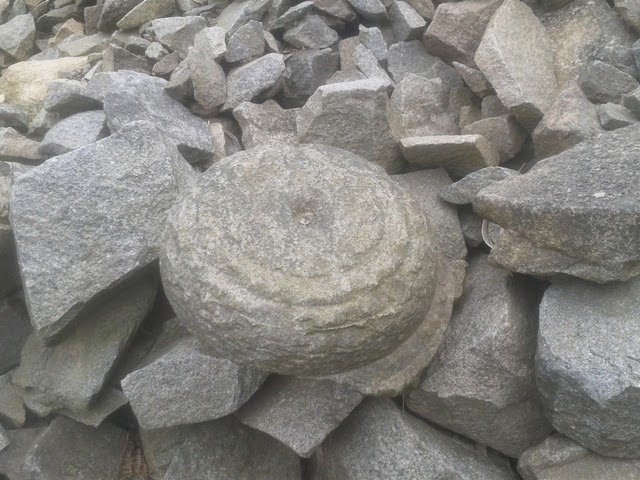 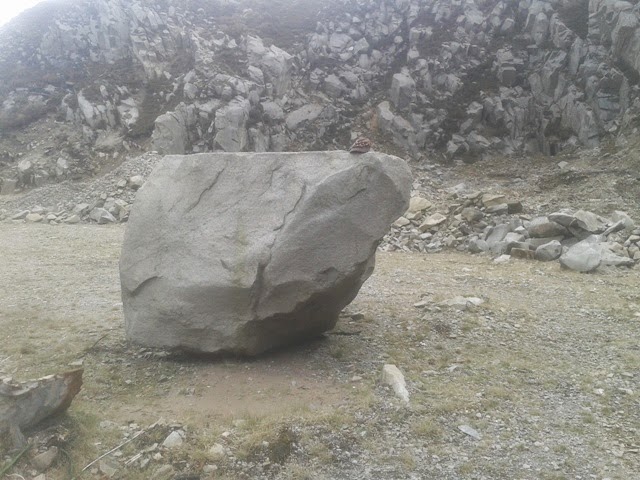 Another cool block, this time poised for the saw methinks... 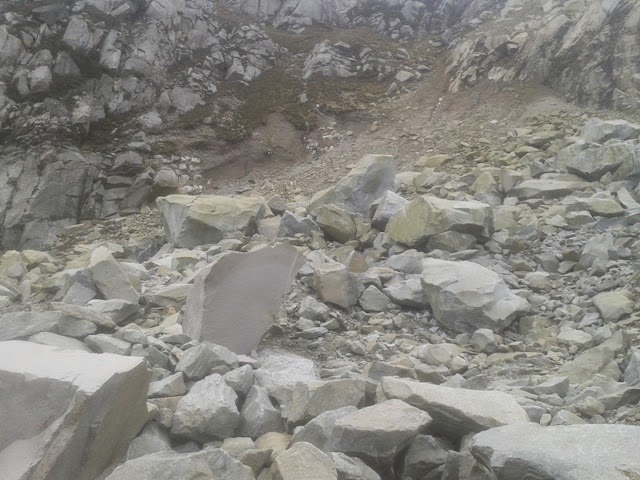 The Pile. Much to play on here, but you project may eventually be thrown down the ice.. 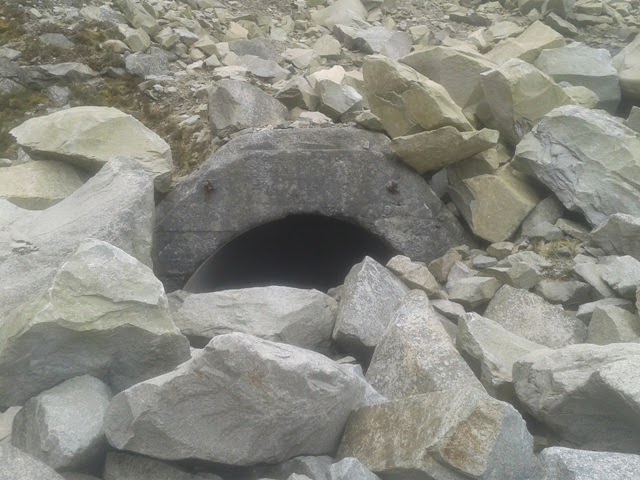 A Tunnel in the rubble. 10ft in diameter and it took all my will not to give in to exploring its depths (headtorch next time...) 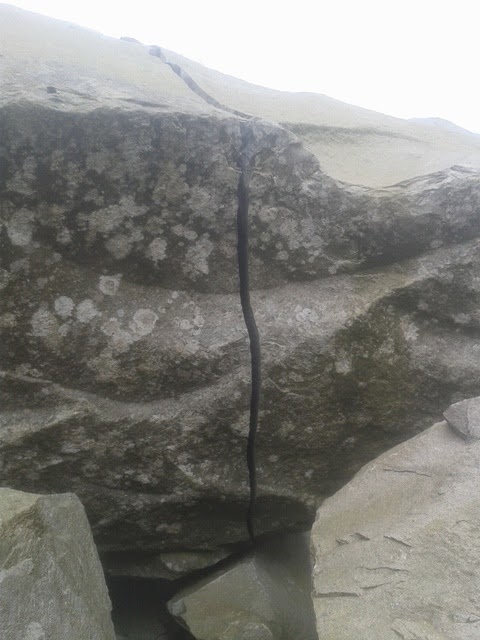 Saw this lovely splitter and decided to investigate.. 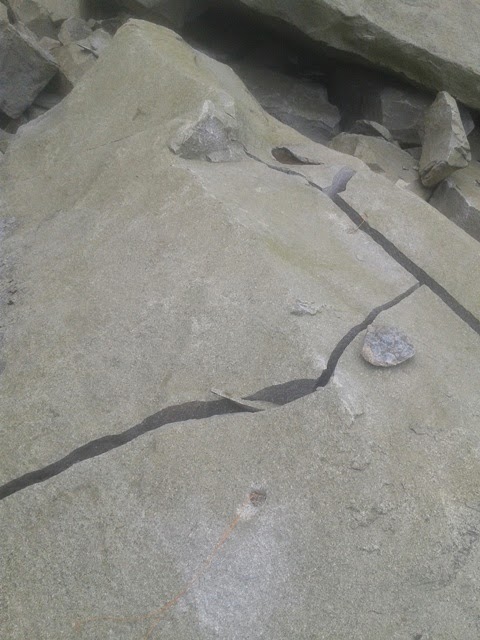 The spent charges still had wires in place. They may not blast the face, but they will blow things into manageable pieces. 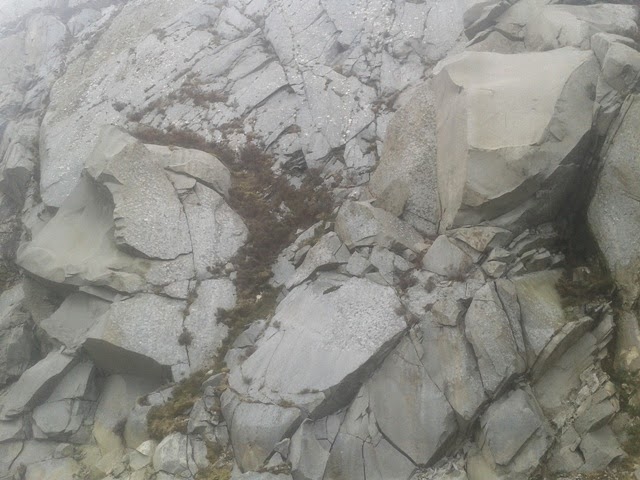 A couple of really sexy blocks perched on the face. Sadly too detached to tempt the sportist, however, maybe a JCB will help a boulderer out? (there appeared to be one digger allotted to (abandoned on) each level) 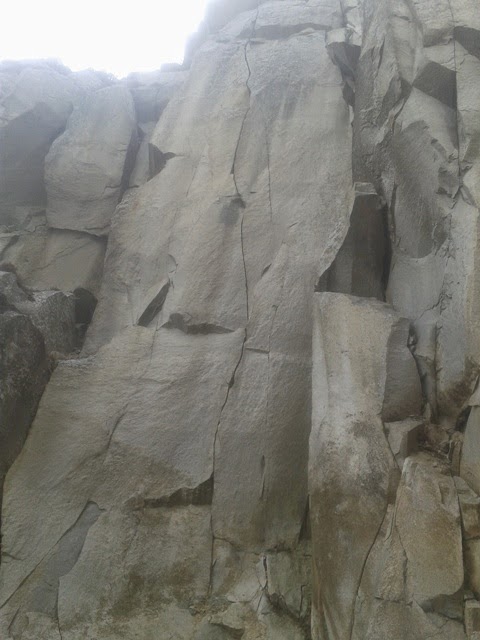 Its not all about to fall off. There was this splitter next to a JCB.

So Trefor Quarry. You could lead there, but its a bit chossy. You could boulder there, but the boulders might be gone tomorrow. You could run around there like a big kid (like me), or walk the dog like the locals.

Labels: cracks, exploring, getting out

Open Project of the Month - April


Passion versus Obsession. Two sides of the same hill, one side full of positivity, then go too far and you're over the brow and into the slough of despond. I seem to spend a lot of time teetering on the top of this hill, and it has happened again with the latest big discovery. 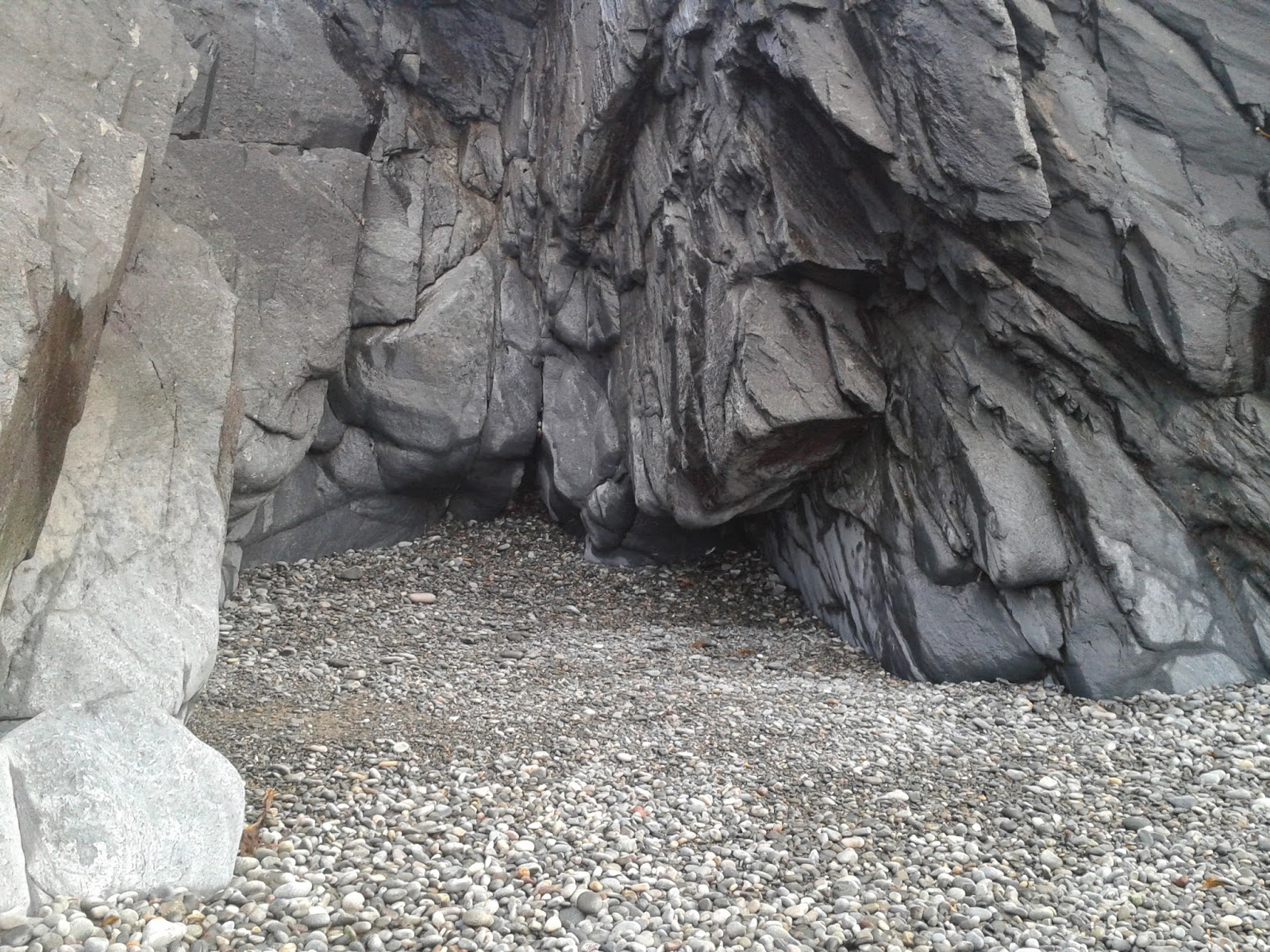 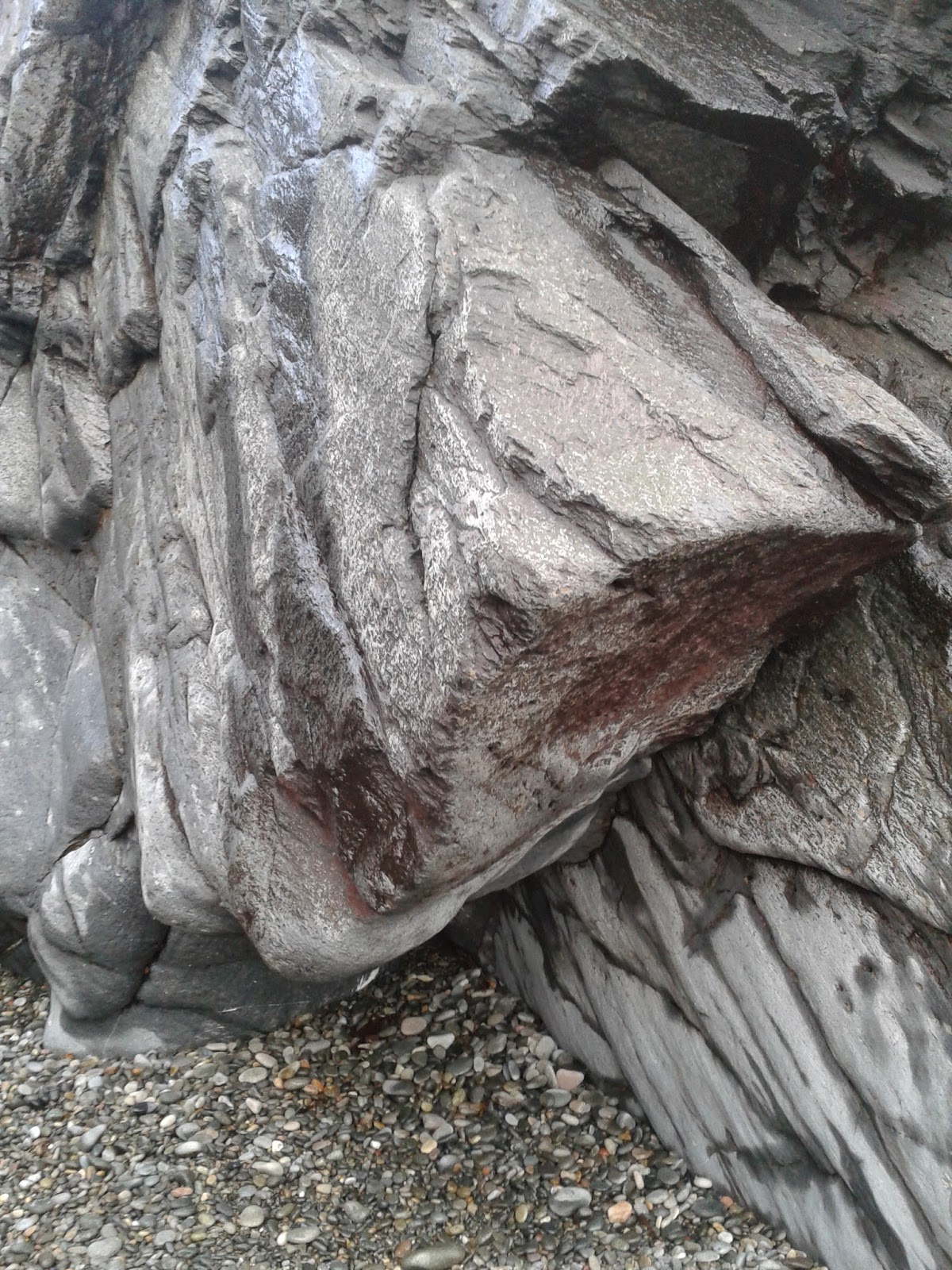 This is the chappy I discovered on my last (February) visit to Shale City. And very happy it made me too. Its solid and big (2m wide at the nose) and has lots on unhelpful slopey directional holds.

I returned with mats 2 months later during a neep tide and found this:
The pebble level had risen 1-2 feet, so the appealing huggable prow was off limits, and the arrival of spring had raised the algal growth. With a little trial and error I found that the rock cleaned up with some ragging ( a flannel, but next time a towel, more clean bits to use) followed by chalking and brushing off. With limited warm ups I found it slow to get going, but slowly pieced some links between holds and established some finishing points: 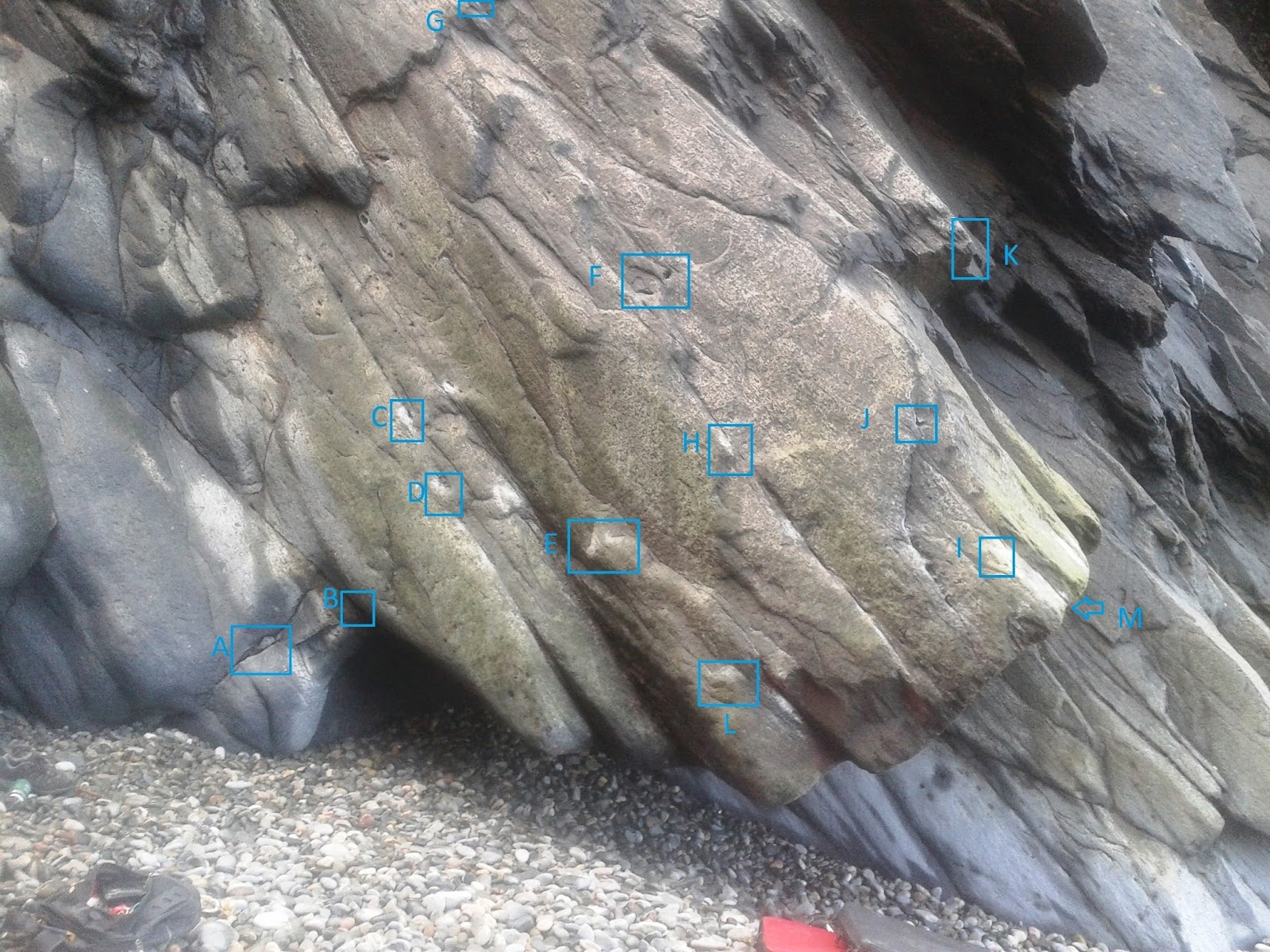 G was a highball finish and K was the lowball. I did a traverse from pockets C&D to K via F, and managed a lower start from B and D. I also went C&D up to G, E&H to F, J&I to K, and spent a while trying to link into this from the crack underneath (in Vid) via the cool pocket M.
This last project would be worthwhile regardless of pebble height, and if the pebble height lowers to previous levels then the A&B start can be used for the high traverse. The keel might be possible from the L hold by the strong, and with lower pebbles the talented may link the keel from A&B.

I've done enough obsession, but I'm passionate that someone should make something of this. I will still return at  some point, preferably the end of spring tide cycle to see if the pebbles levels lower, but I'll want a spotter and less creaky elbows.
Don't try to solo out the back as the last 2 feet is shale cities finest.

Now for the location; Park at Trefor Beach and walk past the pier to the headland. Scramble down to the remains of the old pier and its found in the second cove. Its accessible about 1.5 hours either side of low tide. Here's a Pic.

I've yet to squeeze enough free time to tie on yet, but the bouldering is coming on in
dribs and drabs.

A team was assembled to try some exciting stuff in Dyffryn Mymbyr, but a strong wind an occasional raindrop signaled an exodus to Coed Aberglaslyn to seek out a fabled boulder... Which was wet.
Some scratching around on the moor above found a few titbits, with Ben's ascent of this 6A! proving the highlight. 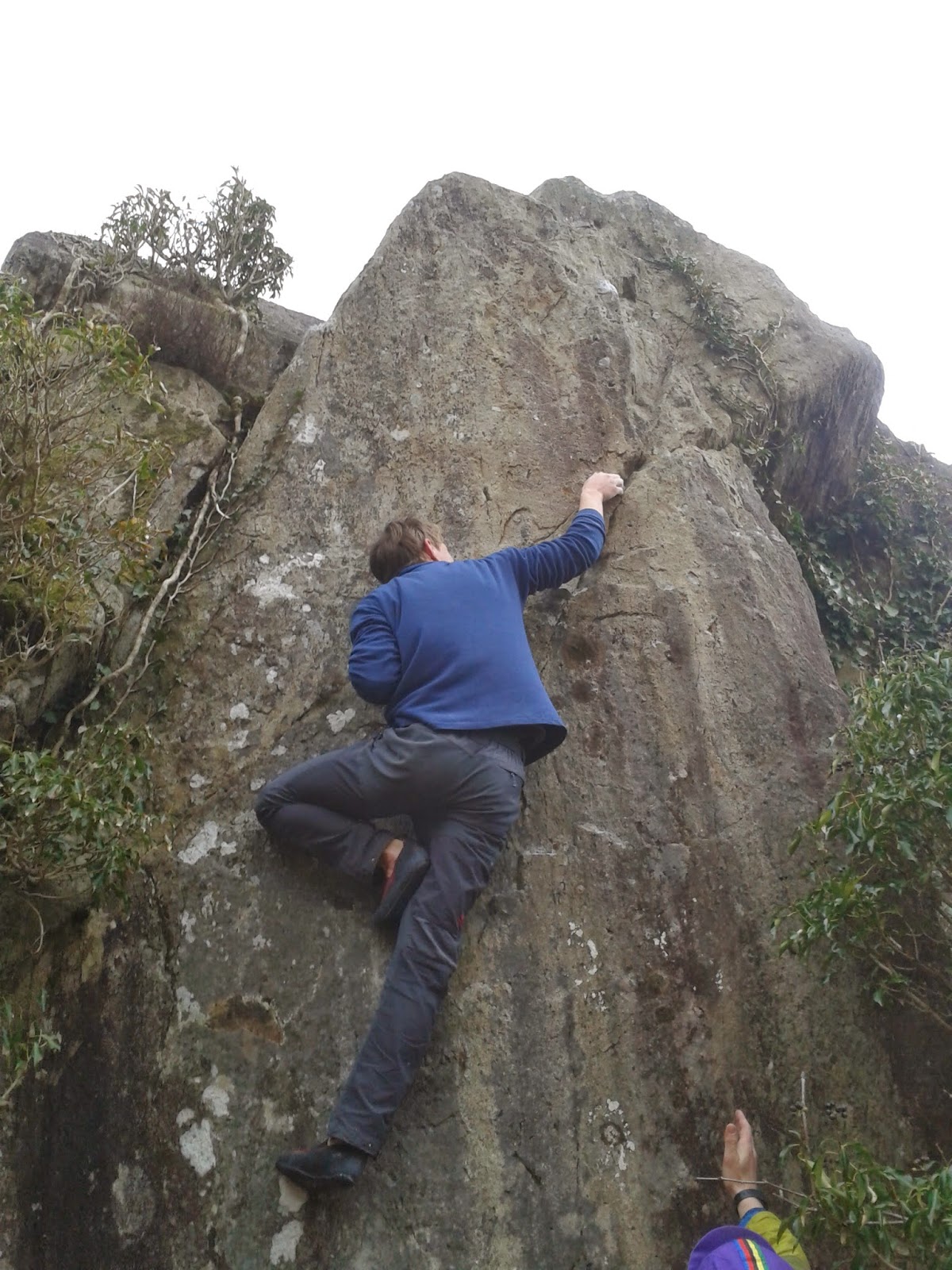 James on an exciting repeat, you can see Ben's outstretched fingertips as he spots!


Most recently I've visited Braichmelyn for the first time, as part of my commitment this year to slow down my scratching around and actually climb some classics. Once I'd found the place, I quickly came to appreciate A) how good these "classics" can be, B) how stiff old skool problems can be, and C) how old skool crimping quickly draws blood...

I was most impressed by Briachmelyn arete which I will return to, as although it fulfills A,B and C, and it only comprises of a couple of very morpho moves, its very good.....
It has so many useless holds that it lures you into a myriad of attempts at different combinations with the promise of "it'll go this time.." Until C of course. I think I have a sequence for next time, however!

That need satiated, I'm off to scratch an itch tomorrow on what might be this years big personal project.
Wish me luck (thats its any copp)
Posted by HoseyB at 13:27 No comments: