So today I have dealt with a few issues..

About 9 months ago I tried a project on a whim, on my lonesome, with two pads. The result was a bust ankle and is documented here.

The project in question was nicknamed The Shard and I had first latched onto it in 2016, and actually started the process of considering actually climbing it in 2017.

However I soon stalled, as it was scary, and I didn't feel up to it. Shortly after that Max Dickens, Mark Lynden, and Noel Craine started developing things in cwmffynnon, Max had tried The Shard and got as far as the shelf. I sort of let it drift to the back of the cutlery drawer.

Come forward to 2020, and the new guide is in the works, and expanding to cover many of the wilder mountain blocks, including Cwmfynnon. It seemed like a strong stimulus to get my affairs into order, and complete my dormant projects before someone else did, and claim that ego buffing reward of getting it in the guide..

So I bust my ankle.

I was resigned to letting it go, I was not up to the task. Some kind people persuaded me otherwise, and 9 months passed as first I healed, then painstakingly got my head back in the right place.

The issue with predominantly bouldering on your own, is that:

a) you can only lug so many pads, and b) there isn't anybody to give encouragement/a spot/a note of caution.

Highballs need these, and I'm certainly going to be more of a team player in this regard from now on.

Mark Reeves and Dave Fiddler graciously agreed to pad Haul and stomp into cwmffynnon with me. I was fairly anxious, not sleeping well in the previous nights, and I abbed to chalked it in a poorly warmed up state. For me the pulls of the ledge to the top were the crux, certainly psychologically. I rehearsed these on the abb, but my left forearm was still tight, and the moves were creaky and sore through my elbow. Determined not to ruin our efforts, I switched to warm up overdrive. 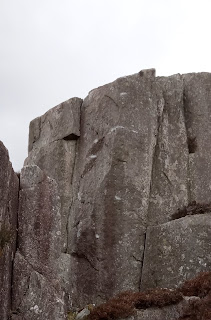 The chalked up Shard.
When it came time for the first go, I was still anxious. I knew my fingers were not as strong as last time. First go I fell off at the big crossover. However, this was where I fell on my first go 9 months previous, and the extra pads and guiding hands (5 pads and a spot pad rather than a lone wolf's 2) gave me a boost.
Next go I latched the crossover, but the stretch for the bootstrap pocket above eluded me. I was climbing in my miura's as I thought the solution's contributed to my bust ankle, and the miura's were flatter and less turned in. Dave suggested I put a solution on the foot I didn't bust, and that gained me some form through the moves.
The boys took a break to climb The Goodie, and I had a proper rest and studied the foot options.
A slightly higher nubbin and this happened :
The Shard 7A! (I think..)
Sorry for the swearing, I was a little emotional. Dave repeated it afterwards to the ledge (as Max & co did) and agreed it was 6C to there. So it depends on how much those last moves are worth. It may be a soft 7A or a hard 6C+. I reckon it's better approaching it as a 7A as the tough moves at the top need beans in reserve.
So I've got over the hurdle of asking for help, and I've got my fighting head back in gear. Hopefully this will lead to good things this year.
Watch this space..

So when you're a self confessed North Wales based offwidth climber, you do tend to get asked a lot about one climb..

I first tried George's Crack probably about the first time I owned a bouldering mat (bought 2nd hand off Ray Kay of all people). Actually if memory serves me I had also acquired a stunt mat from the 'set' of Clash of the Titans by that time. So that puts it as around 2009/2010. I remember lugging them both up with the stunt pad (spot pad thickness, but size of a single mattress) protecting the along, and my little battered Holdz pad protecting the up.

First session I think I got about 2 feet.

Second session was a year or so later with a pair of wide boyz who were touring the UK cracks on their road to free the chocolate starfish. They had repeated Liquid Armbar which made me happy, and proceeded to lap George's in a weight vest. I'd tweaked my ankle trying to repeat ToeBar, and was unable to emulate their fabled fix-all "the wide pony". Still made a foot of progress.

Session three was 2015, and is documented here. I'd sacked off wide pony in favour of leading heals first and following with the stack; known as Trench foot. However I was convinced that I needed to emulate other www ascents; hang lower and be more flexible to reach into the crack..

I've really struggled with my flexibility over the years, and blamed my inability to fix it for my perceived general crapness. Some of it is left over niggles from my groundfall accident in 2004, some of it is age and motivation.

However, as babies and life got in the way, I sort of believed it was just beyond me. I moved onto fixating about the Tosheroon project instead.

First significant kick off the bench was getting the first ascent of Randy Roof. It's totally my style, flared with fun invert footwork, and while tricky I didn't think existentially at the time, but fast forward to 2020 and getting involved with the NWB3 feedback team. Kick off the bench number two was that Randy roof was supposed to be harder than George's Crack, and lots of arguing about my desire to see GC in the guide as 7A (it is, yipee!). I also was being asked opinion on other bouldering cracks I hadn't done yet..

Basically I had to stop the moping and get crack climbing!

Black County Crack went first (pics on my Instagram) and I knew I had to get my finger out and put George's to bed.

Trip number one (session four) was last Thursday, I was on my own and struggled up with three mats. I was going to stay trench foot and keep as close to the crack as possible.

I was psyched, as I had battered all the tech into submission. I knew where not to Jam and what to try at various points to Wedge my mitts in..

Enter the bouncing ball of Welsh Crack Psyche ; Eben! (you may remember him from Pinnochio Crack). So he sacked off a family day to be my wingman and pad assistant.

And Fifth session, second go, I dry heaved over the top.. 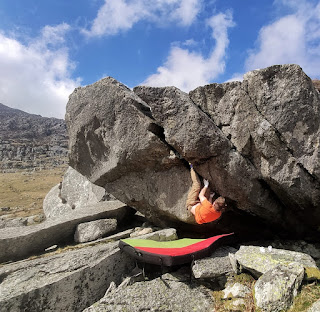 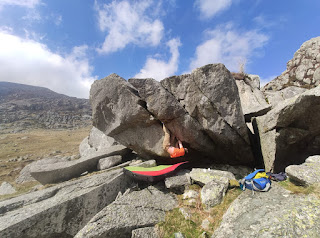 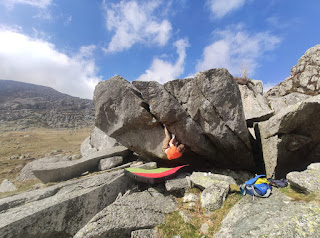 Definitely indebted to Eben (topping up his account with session 2) on this frabulous day. 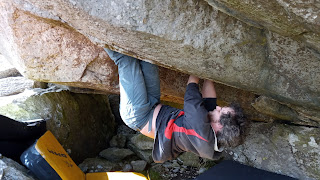 So this milestone marks the start of a new road, gaining in confidence, bagging some more cracks, and ultimately leading to the Tosheroon.
Watch this space