The Joys of Getting Beaten up

Yesterday was My first day out climbing since, I think, November. This has been due to bad things such as injury, weather and illness in the family, and the good things that having a family of three wild boys brings.
By 1130 I was stepping out the car, strapping on the gaitors and a pad stack and stomping up to Dyffryn Mymbyr. The goal was this, which in my mind has become Big Bad Bari. The snow was very patchy and generally avoided, but those bits I had to tussle with were of unpredictable depth and firmness. All good adventure. I stopped at the Mighty 'Tashe to warm up. This was lovely and warm in the sun and apart from a drippy philtrum was bone dry.
However, its extreme slopeyness meant it wasn't that great for a warm up. maybe back when I was a feidr fw devotee I could have lapped a few things. But I'm soft. Like Feta. Shame too as the snow had made a great platform under the crux section of the traverse.
I repacked everything and slogged up the snow encrusted heather to the main event. Good news; it was dry and snow free, and all it took was a little light brushing to return it to condition.
With my Borrowed pad, I had enough encouragement to give it a proper try. The first tussle commenced, or rather would have commenced if I could have seated the initial stack properly. Soft hands along with a soft body, not enough fighting, too much playing. A tighter fist and an enquiring eye, lock thumb against extensors and rotate. Feet are up and Wales is upside down once more.
Thrust legs deep, crunch the flabby core into action, hands grapple and crush untempered holds, but the memory of ability kicks my abbs back into gear and hands back into action. Lungs and Lactic, however, drop me to the pads.
Promising, I pant for a while and flex wooden digits, water and cake imbibed I bury my limbs into the duvet jacket. I Wait.
Round two. Stack and kick, keep the stack and pike thrust deep. Dangle and reset, clamp, thrust, shuffle, release, flick. I've got the pinch on the Chock.
Nice moment, pause, hooray..(small h)
Time reconvenes. My gut is taking a punching, lead legs swing and stab, a constricted upper cut gains a pinky bar. crap. Flailing fists gain flared pinky first cup jams. Rubbish, stab, crunch, swipe..
Splat.
Well that was interesting, the pinky bar was just an inch below a proper pinky jam, The game changer was just out of reach that attempt. I wait, raw hands throbbing under the duvet. Extend, retract, repeat. Flush out the lactic and lymph, slow the breathing.
Round three. Couldn't lift my legs in.
Knock out.
Bruised and Battered, I grinned my way back down the slope, wading the drifts and skidding over the weepy bogs, my head now throbbing with all familiar exertion, (no puking this trip). Deep breaths over the pass and off to bed, an hour sleep.
Next time I hope to catch Bari. a bit more sleep beforehand, a lack of lurgy, and maybe some more effective fitness and I'll flipping 'ave 'im.
I've realised looking back on past endeavours how much of an effective training ground Feidr Fw was, I was nursing pulley injuries at the time and was seeking jamming as a distraction, so nearly all    the climbing I was doing was out here rather than indoors. I spent a lot of time up on the hillside, So much that a friend rang my missus worried that I'd disappeared  as every time he drove to work at the Brennin, my car was in the same place. A lot of effort, but my futile return trips to try problems I did at the time has shown it certainly toughened me up, like its Vedauwoo namesake, I think I'll be making more regular trips there now, to see if it will redo its magic.
Posted by HoseyB at 14:27 No comments:

Giveaway Project of the Month - March

Scrag end. The left overs of the quarry- a series of isolated buttresses below the entrance to Twll Mawr, Golgotha. 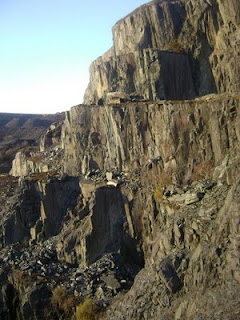 After the sport offerings of last month I thought I'd offer something more trad. Most pitches here that are trad suitable are a bit chinese takaway; nice at the time but ultimately disposable. However there is a vein of dolerite that starts next to Chitra and could be linked up all the way to Golgotha. Individual pitches that may be fun at the time (in fact I think the 1st pitch may have been done) but together as a ground up experience would be something special. With all pitches being not completely inaccessible from top and bottom, its even on the right side of committing too. 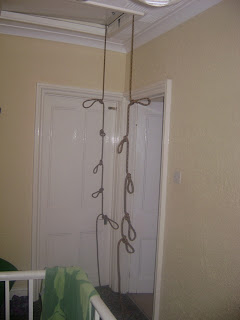 No Finger Board? Rented House?
Old rope and roof joists mean total upper body and core punishment can be yours!

A plus is it can be hidden away from the kids.

Just looked out the window, and it seems the current cold conditions has meant that this Ice Fall has formed.

Not sure how thick it is but Its probably worth a punt
Posted by HoseyB at 08:04 No comments:

Giveaway Project of the Month - Feburary

Scrag End. The Lost levels of Rainbow, snipped off below Golgotha. Best accessed by entering Twll Mawr and foraging around the base of Running Scared for the boulder squeeze into the rear entrance of Scrag End, This Was Joe Browns original passage into Twll Mawr on his foraging, before bits dropped off.

All These levels are unclimbed (or unclaimed) and this particular wall seems to lack seepage, gets the sun, has an open aspect and a view. What it doesn't yet have is bolts. 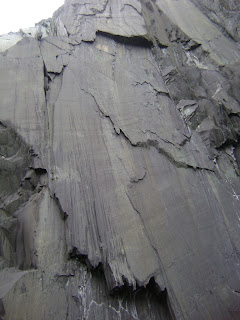 Enjoy
Posted by HoseyB at 13:29 No comments: