Every two years or so, I get a yearning to walk down a steep hill,  and scare the excrement out of myself at Porth Howel. 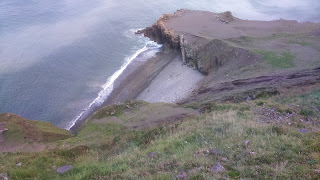 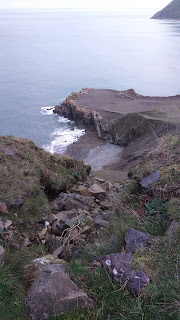 However, the beach this year looks a little different.. 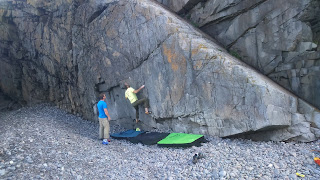 In 2016...
Well in 2018, Richie Crouch and myself discovered sand, an extra metre of climbing, and even some roofs. We'd planned the trip well in advance due to the favourable tides. All we needed was the weather, which was looking dodgy. Day by day the forecast improved, until the day came, and despite overnight rains, dryness prevailed. 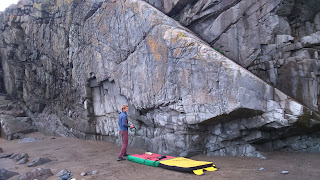 Well my first thoughts were did I pack enough underwear, could I reach the starting holds, and would Richie think I was sandbagging him. We warmed up on th eramp, and Up the Junction (bit crimpy with the new start), and then turned our attention with the next line along Rockaway Beach. All was going well (after another intense start) until we swerved left to the fierce crimp. What breeze there was was blowing over the top of the cove, and the wall was holding onto the residual dampness. Thus the crimp was well 'orrible. Rich Lanked, and I Backed off.

The slight damp, and the added height sent us off on alternative missions.. 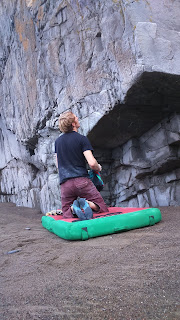 Richie eyeing up the new roof at the end of the Wall. This became the sit start "What a Difference a Wave Makes" at 6Cish. back wall not in of course... 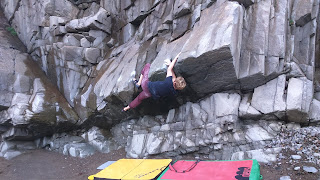 The Flail Rail gained some height also, and Richie pushed through the wet patch for a valiant ascent.

A little later on the wind there was had done its work. and the holds moved from light brown to a whiteish grey. The Wall of  Something Dead was dispatched with a little up and down and girding of loins (now pushing over 7m!). Blitzkrieg Bop gave the most fight; 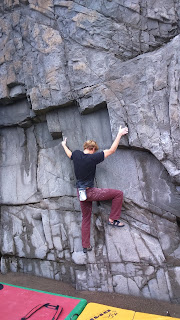 Here Rich gains  the original start, which was still hard back then. I  got through to the crimps above a couple of times, but couldn't set up for the eponymous "Bop". Rich made this, but bottled the highness.

Tucking our Tails, we made for the shelter roof at the back of the bay. Even here the storms scouring had provided more playthings 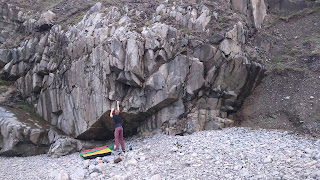 The wall to the left of Rich is "Bat Country" 6A this homage refers to the FA were I foolishly topped it out, skating up the scree and mud above. It now offers a chance to down climb closer to the pads after hitting the jug rail on the other problems. The Niche to the right finally got a sit start off an undercut near the right wall at the back (hint - the dry one). "The Idiot Kings" 6C is so named for the battle I had with the wet undercuts above ( I also couldn't find the kneebar again). Worth mentioning is the wall to the right with the crack, think I climbed this last time, but didn't top out, a little looseness and lots of Fire Brats!

The Arete was claimed by Richie via a low start. "O-Dogging" starts off a lefthand pinch and a righthand sharp undercut, and weighs in at 7A+. 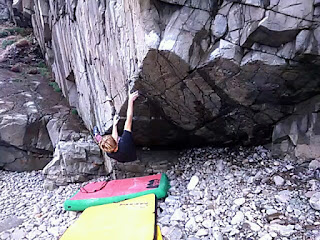 Rich trying the obvious sit start challenge to O-Dogging, as long as the pebbles don't rise once more...

Porth Howel is a Top venue and worthy of more attention. who knows, maybe next time I attend (2020?) we'll take a team!