Renaissance of the hard move

Inspired by a thread on ukb, I was compelled by an old vid to return to an even older project.

I blogged about it at the time, and included a video still, but I was a bit cagey back then, and a little paranoid it may disappear to some musclebound wad. However, a few years have passed since Skadoosh found its way into North Wales Bouldering, and it still remains, snidely taking the piss. I even know of one rather talented fellow having a go, and not making any headway. Content, I allowed it to sit on the back burner for when I could apply time and effort to building power.

Having passed through a period where time and timing have frustrated my efforts, I thought I may as well just resort to flailing and trying. As this half term has been very trying with the kids, I found myself battered by the winds on the Clegir road, at 1630. Convicing myself of available light and conditions, I staggered down to Skadoosh.

In the failing light I pulled out my chalkbag and a brush and willed psyche into the holds. brushing the shine off, and making them more visible in the dusk. 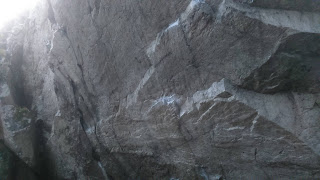 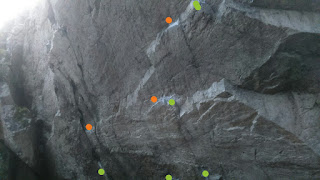 Orange for left hand, Green for right. Sometimes the process of analysis and working stuff out is the main meat of the journey. Especially when the finished product seems so elusive.
So Wellies never left my feet, But enough psyche was brewed to 'Walk through'.

This involved putting said wellies against the base of the overhanging wall and clinging my way through the sequence. Blow m if I didn't fall off, maybe next time I'll put boots on..

It was so dark that I've had to try and filter this vid into visibility. Hopefully it'll make you smile as much as I did.

We're going on a Bloc Hunt..

Wednesday was a window of free time, slightly problematic due to a child off school, and a non ideal weather forecast.  Undeterred,  Ethan and I headed off into the wilderness looking for treasure. 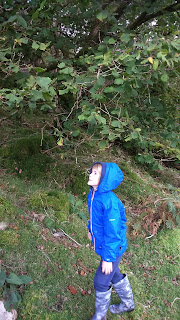 Ethan identifying our first piece of booty ; hazelnuts!
This was to be a serious mission.  The geology was sounds,  it was a foray to confirm correct topography.
First signs were good.. 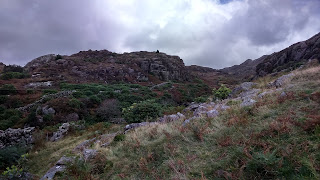 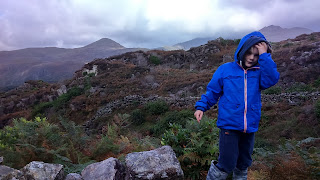 However,  the going underfoot was less so.. 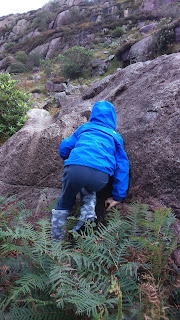 For Ethan at least, first strike gave some fun bloc's. I was looking for something a little bigger and cohesive to get a circuit together. 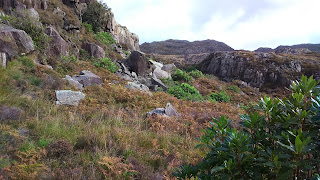 One boulder so far,  may not have found the pot of gold this trip. However,  I saw a few outliers that warrant attention when not restricted by little legs. 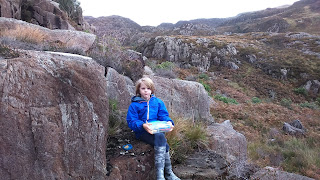 Lunch with a view. 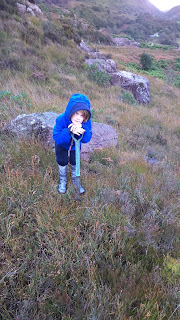 Ethan found an erratic fork and proceeded to do Martin Crook impressions. 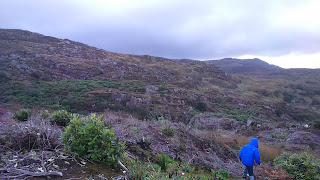 Ethan declared the day seized, and broke trail back to civilisation and Sponge Bob Squarepants.

I'm currently waiting for nicer weather to allow some outside climbing in my little freedom windows.  Hopefully the scrabbling around I'm doing indoors will stand me in good stead.