Giveaway Project of the Month - December

As Usual, I giveaway a winter Project just as it all thaws.. 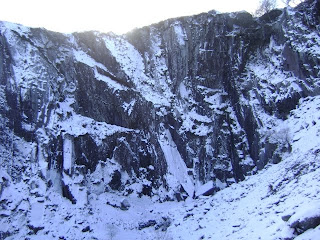 Wall in the Hole quarry of the Glyn Rhonwy Quarries has some lovely damp and shadowy walls, a small llyn, and a water fall that feeds it. Get the hillside soggy enough prior to the next freeze, and ice entertainment will be yours. This pic was taken in its drier, wintery garb.
enjoy
Posted by HoseyB at 03:13 No comments:

Hope one and all had a good xmas vibes. For me it was a chance to recharge and hang out with my family/ spoil the mini me's.

Traning has yet to start. Clearing the 400m track at work has been dispiriting enough and tends to generally beast me rather than the specific torture required.

and then like sisyphus Ihave to watch it start to snow again..

Normal honing will resume in the new year...
Posted by HoseyB at 03:06 No comments:

Despite Being properly excited over my new rather large family, the latter half of this year has been rubbish for my climbing motivation. This is not because of lack of time (see micro adventures) Rather, I've been plagued by injuries (wrist and sciatica) making me feel like an old man.

To combat this, I've decided to set myself a goal, announce it, and get training (more later)

This is Codename: The Beast in Me.. 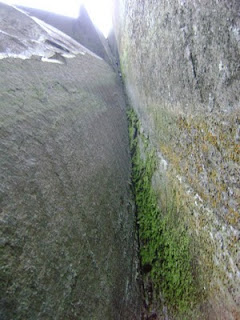 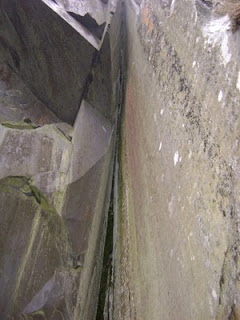 Suffice to say, Its going to be a rather hard offwidth to conquer. All the usual suspects know I've set it in my sights and, are graciously allowing me a good go (cheers G, Stevie and Tom).

So all I have to do is get strong, get it clean and grind to victory... Think Gin Palace on trad.

As to actually getting strong, I'm in the dilema of time management and having to isolate my busted bits.

There's also the fact that training hurts, at least for offwidths it does...

Currently thinking of serial micro sessions of beasting mini-supersets to failure; something like 3 push ups into 3 pull ups-in-pike and continue until puke.

If I settle for nothing now..
Posted by HoseyB at 04:16 No comments: