So intention versus reality. Life and work have once again conspired against me, as well as an unhelpful dose of apathy. I'm still down on my offwidth training, hard to motivate myself to boot the kids out the way after a late shift.

Instead I've been focusing my attention on Porth Howel, sprucing it up for the forthcoming Coastal volume of North Wales Bouldering. 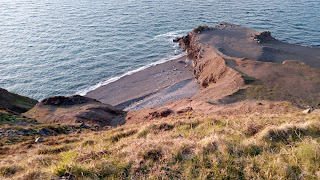 I am deeply smitten with this tucked away quarried cove. Despite the fact its at the bottom of a big hill, and the height of the pebble beach varies seasonally by over 2 metres! At least it is vaguely predictable. 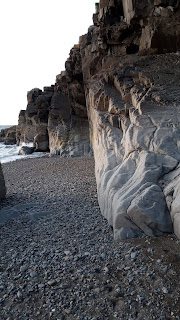 First port of call was the Seaward wall, and having another go at a highball arete that scared me off last time, as I could not work out how to top out, and had to reverse to ground. Having scoped out the top and decided that discretion was the better part of valour, I scoped out a flying ramp of footholds leading into the top of paradise groove. This proved to be key, but still very scary, and The Dread Pirate Roberts was born (at about 6A+!)

The pebble level had risen on the Seaward wall. One move less required on Seams Dynamic, and 2 Jugs was now a sitter. I had intended to try the lower seam traverse, but it had become too bumshuffly. However, the upper seam gave a lovely traverse I dubbed Bird is the Word as the tide was coming in, and couldn't risk a mat.

I then started working the low level traverse of the wall of something dead early this May. I'd always been unable to work out how to cross the alcove below Blitzkrieg Bop, and a bit of a seige was taking place.

A eureka moment occurred when I stopped trying left to right and switched direction. A series of big dynamic throws between pebble smoothed side pulls deposited me at the starting jug of 53rd and 3rd - the game was afoot! 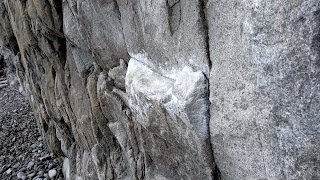 Starting jug of 53rd and 3rd

However 2 weeks later when I could next visit the pebbles had begun their inevitable march towards summer height. The crux section was unchanged, but a berm of pebbles had swiped the footholds of the easy section. Even worse, I couldn't repeat the crux. Like the enthusiastic beta hound I am, I dove into unlocking the new challenges, and surprised myself by linking to the start of the crux. I was however now out of beans. 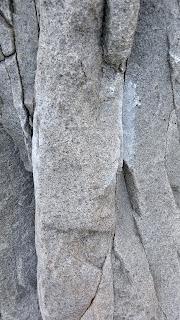 Next session I found all was as before, and I buckled up for the red point. Starting with a proper core and flexibility warm up I moved onto nailing the crux a couple of times. Then it was rest, rest, try, rest.

It was not to be, however I was made up that on my last go I made it as far as blowing the last hard move of the final crux. I was sure it would go next session. 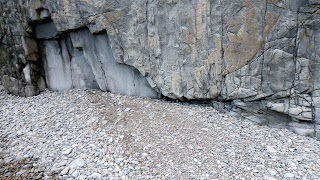 Next session the pebbles has swallowed the footholds of the alcove. End of play until they recede in the autumn.

Having made the journey all the way here I was somewhat disappointed. I was determined to turn these lemons into lemonade. The higher pebbles meant the line over the alcove was less scary than usual. The natural higher line over the alcove would lead into The Rail (down to a nice 5C with this pebble height). After looking at right to left, I decided it would flow better as a natural extension to The Rail starting at the 53rd and 3rd jug. This still necessitated me to dig out a starting foothold, luckily not too deep. 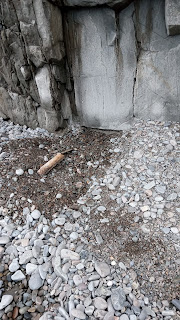 The moves into the launch crimps of Blitzkrieg Bop were quite strung out for me, but a cunning foot jam (and a bit more digging after a pebble dab) led to:
Overarched 6C
Satisfied, I retired to return once the summer pebbles sucked away.
Next is Tosheroon. The imminent arrival of a guide is always a double edged sword; Excitement at a chance to be documented is tempered by the anxiety that your house is not in order.
Despite my troubles in motivating the necessary training ethic, I intend to role the dice and hold things lightly.
Do or do not, there is no try.

Labels: Failing upwards, getting out, Training