This trip saw me with rope and spade. The work moves forward and I'm beginning to visualise the finished product. My walk in was enlivened by a chance meeting with a friend Stuart, and the presence of Warner Bro's once more... I thought there was going to be no chance of me getting away with some minor excavations next to the tourist path, but my usual approach of chatting inanely away to all the security and workers meant that I was mainly ignored. It was only the Art department anyway and no filming involved, just making latex impressions of the walls... 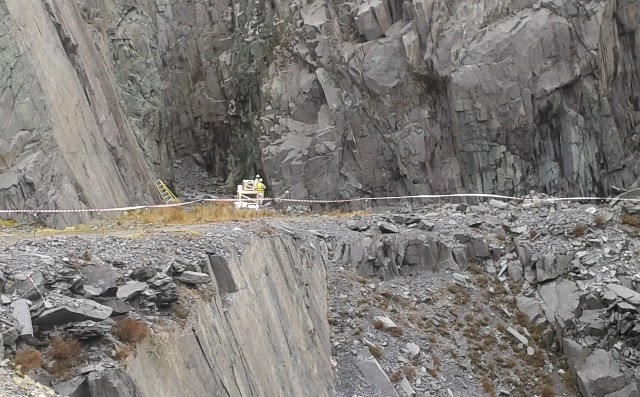 Previously, I had assumed this stage would be fairly straightforward. My previous experiences in Film Set Quarry was that digging out and up was hard going, and I'd thought that pushing stuff over the edge would be swift. However, the work was slow going, as I didn't want to do anything silly, and the ground had more large bits tied in, meaning the spade bounced out. Next visit will include a fork methinks. Not too bad for a short session though. 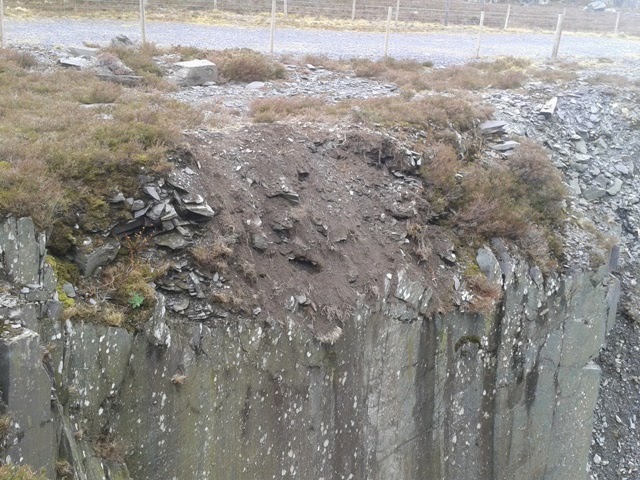 A bit of rain should encourage the process, and once I've dug back a couple of extra feet, it'll all take shape. And hopefully it will also start to blend in... 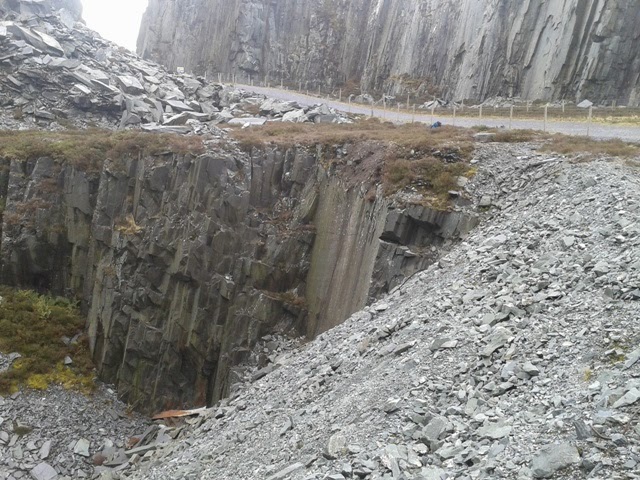 The work so far, with the fence and rucksack giving a bit of scale. Its becoming clear that having this as the first of the open projects was a good thing, as out of all the nuggets on my hit list, is going to take the most, ahem, spade work..
Posted by HoseyB at 13:31 No comments:

Open Project of the Month - March

As the last post stated, I've been trying too hard and flared up my elbows, April is promising a few bits of cool climbing, so I'm reining it in a bit for the moment, and here's the project(s) that are a bit too hard for me, although I may return once you've done them (Or before if you're tardy).

So James at work found a new boulder on Clegir, somewhere I thought I knew intimately. Intrigued I waited until he'd done what he wanted to do, and them swooped in for the crumbs. 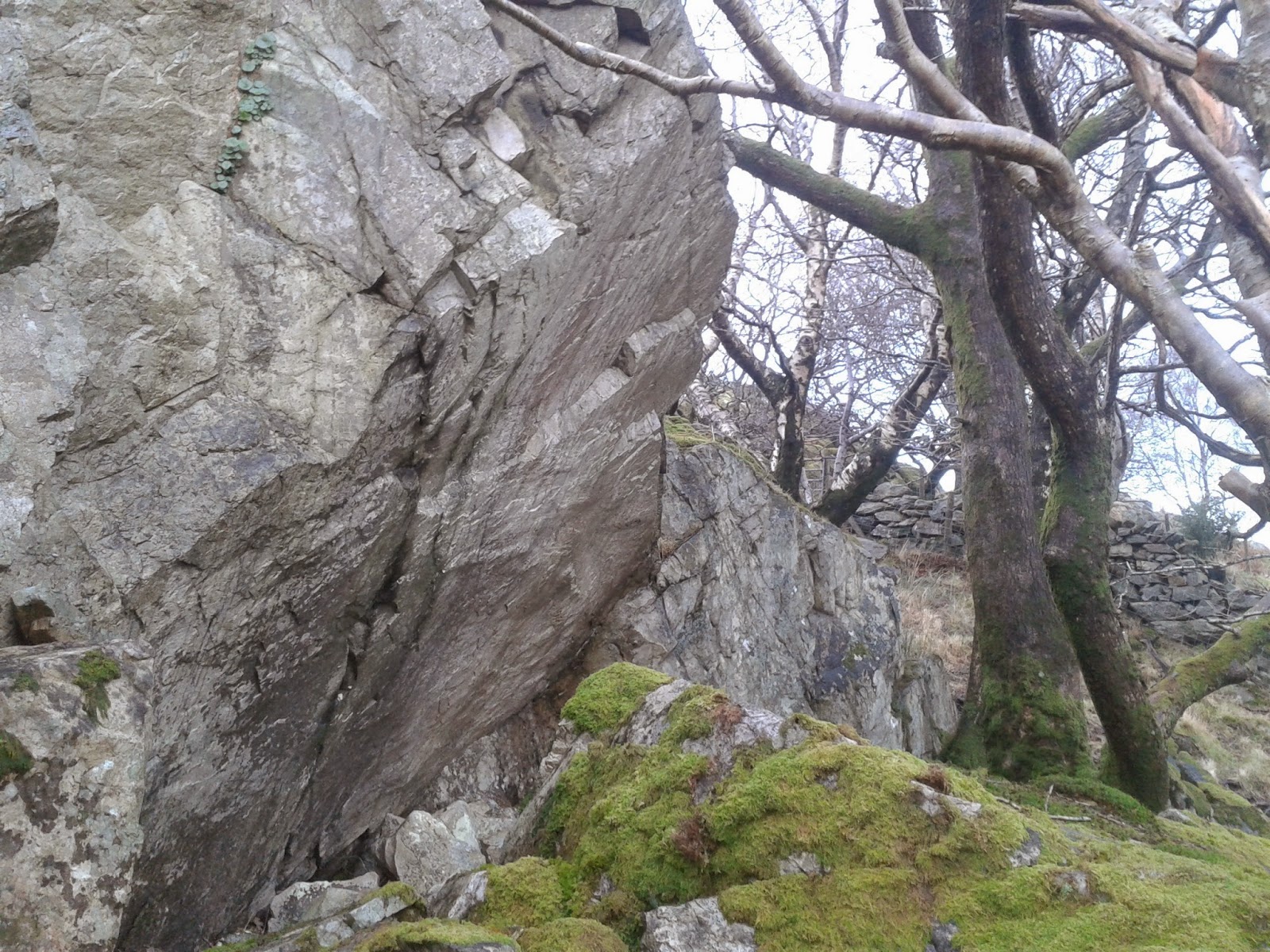 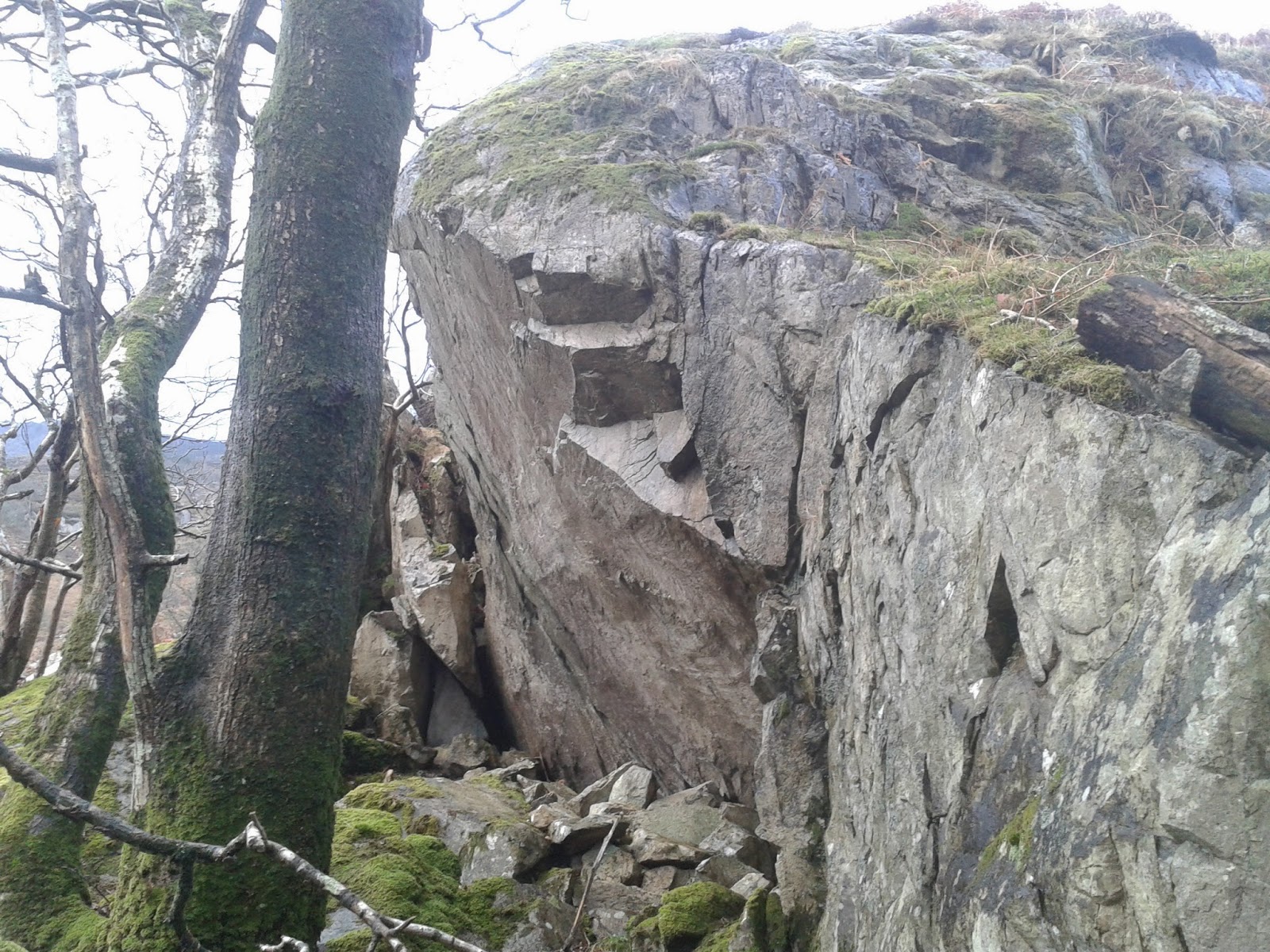 A Very Cool boulder for Clegir as it happens, Although the landing was a bit poor. Some patioing was required... 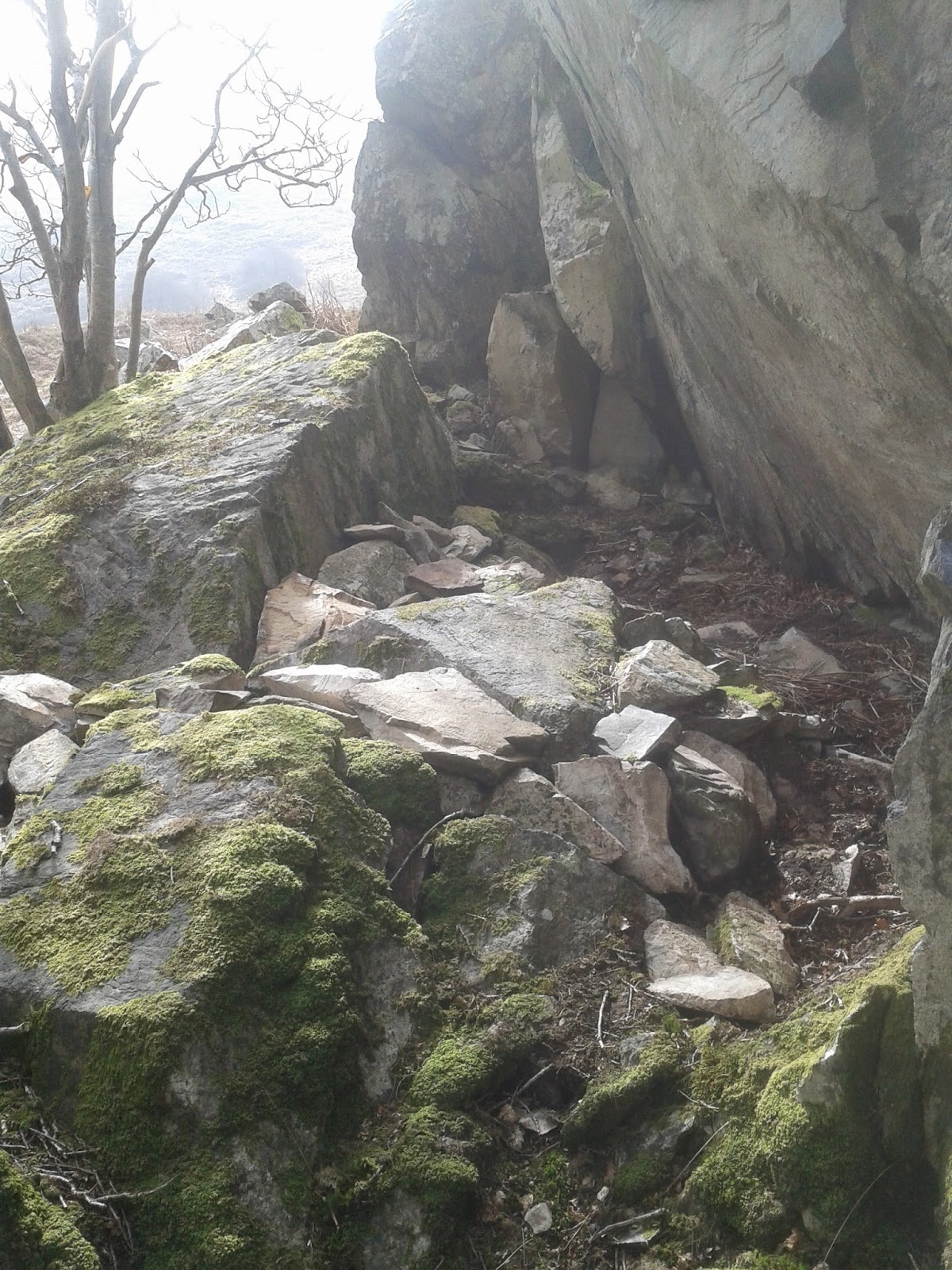 This was the result 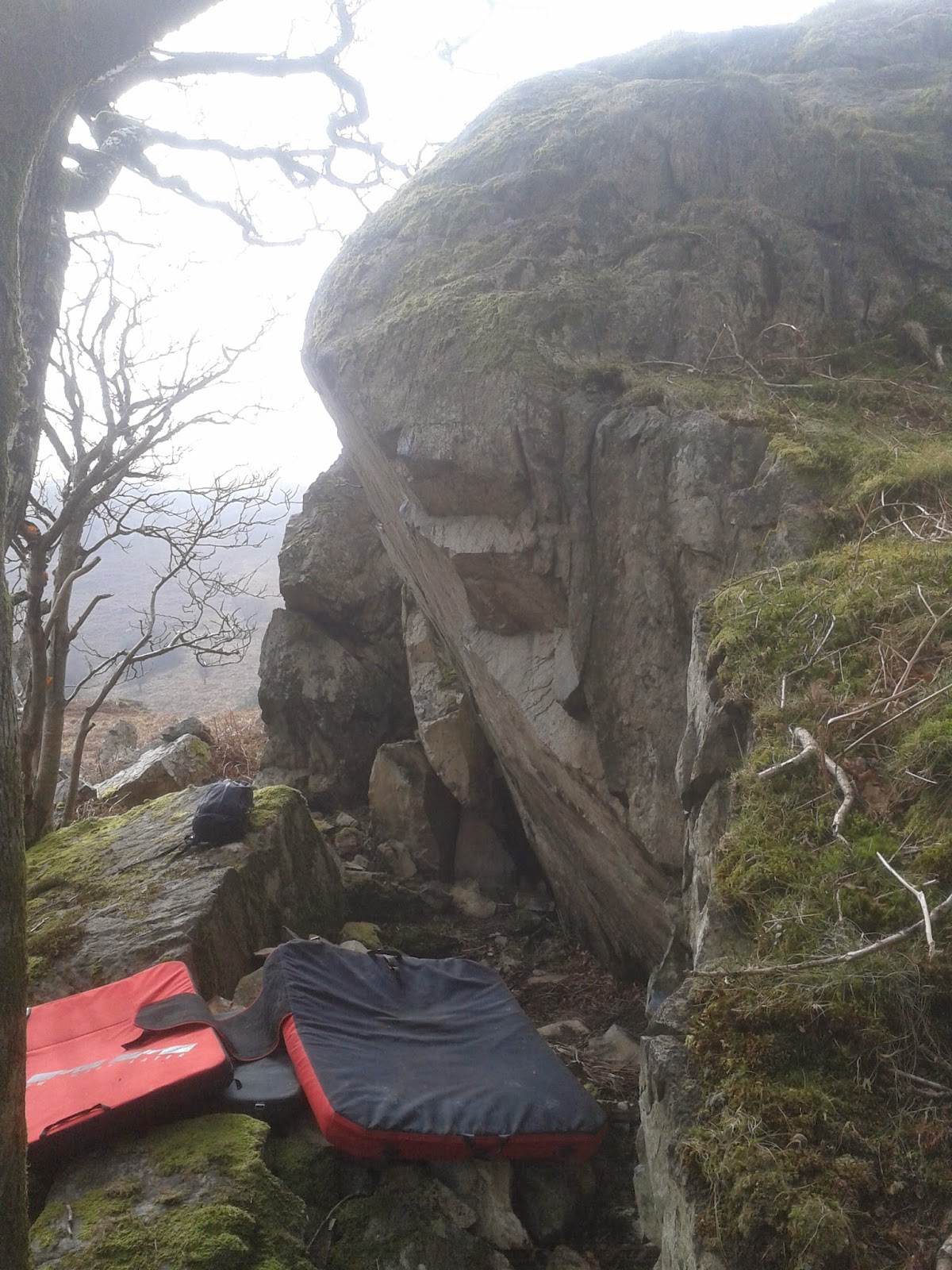 The Mats give scale.. 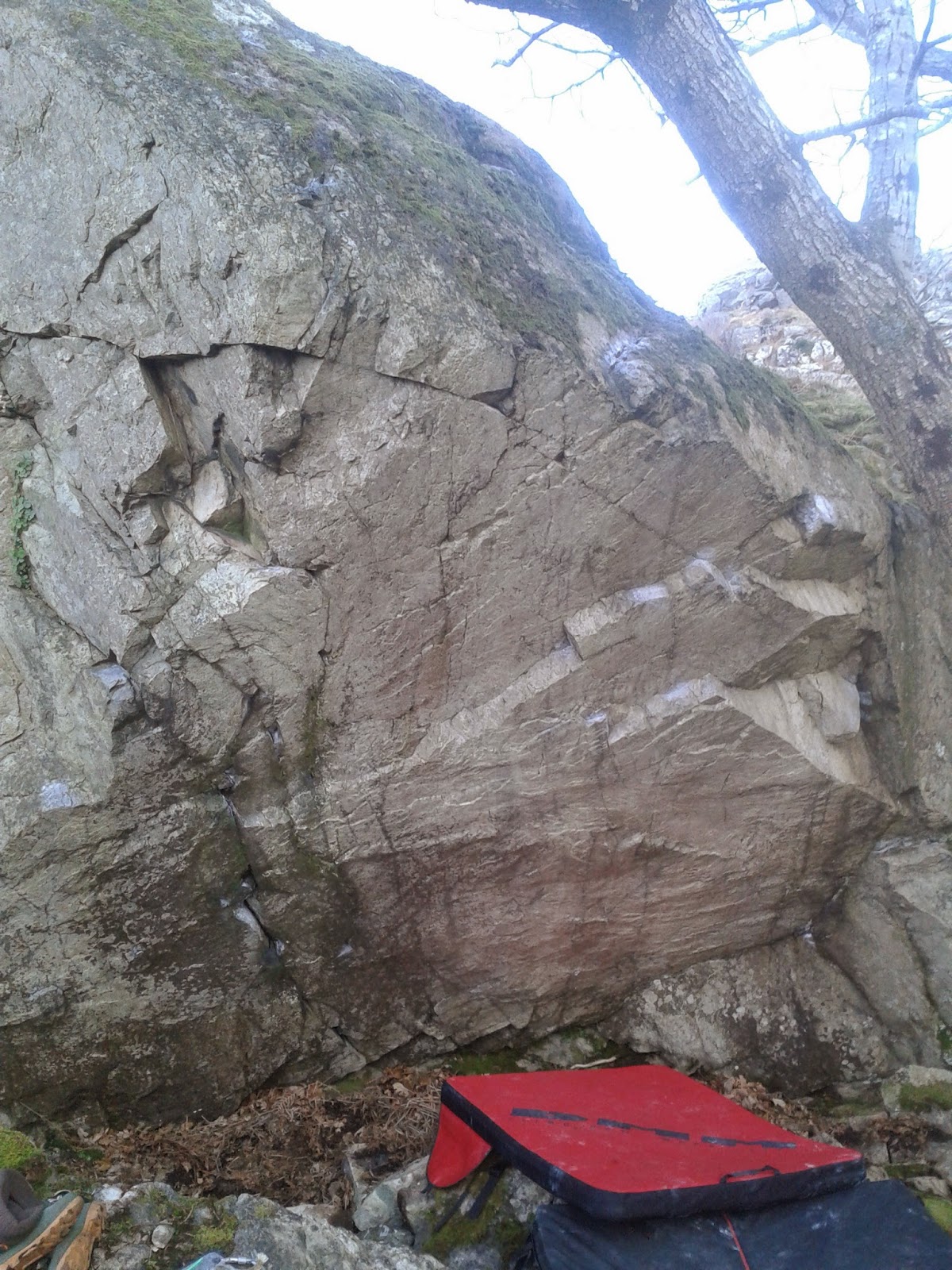 So the established problems are as follows:
James' Sit Down F6B+ on the left of the pic, from the chalked slot to the top. (FA James Lloyd)
The Filling F6C From the right pillar, sort of following the slopey ramp via the tooth into the central rail and mantel out. Airy. (FA me)

The Projects up for grabs:
The Central crouching start. Its off the pinch and slopey crimp on the lowest rail, snatching through into the finish of The Filling. I had a good go at this and did all the moves, but the initial snatch was just too low percentage for me at the moment. Felt about F7B
James' Sit Down into the finish of The Filling via the slopey rail. Its a powerful sideways throw off a fingerlock in a sharp V slot (something I avoid on the original problem) to gain the pinch, and up into the previous project. Somewhat harder.

Ahh yes. to find the boulder park as for pig pen.Don wellies, and walk towards Llanberis a bit, until opposite the Beran road, quest down until you hit a wall and then follow it rightwards. the boulder is on the edge of the woods, just below a gate into the woods.

Not quite got round to deciding on this months open project. As I intimated last month, I am feeling somewhat overwhelmed at the task ahead, and I can see a few giveaway's being inserted amongst the opens. Basically I wont get round to working them all. However it is a worthy aim. This month I have climbed my first trad route since August, and it should not have surprised me, therefore, that it was inordinately wiggy for the grade. I have also climbed 2 boulder problems, which although real (ie. outside) were not "established" (ie. at least more than 2 ascents I guess..) I also ended up trying something too hard which flared up some tendonitis.

This gave me an excellent opportunity to work through the list on my phone and establish the potential of those in the "rumours, optimism and myths" category. Hence, in a long winded way, why I'm still umming over this months choice. I've walked a lot of bog, I've found some proper rock, some real potential. So I'm still stuck deciding what to work. Some good stuff to come in the months ahead I think.

I'm supposed to be getting less obsessed, and getting out more on guaranteed fun fests. However, I guess I'm just as happy climbing vertical forest, questing for the lost boulder of Afon Berthin. 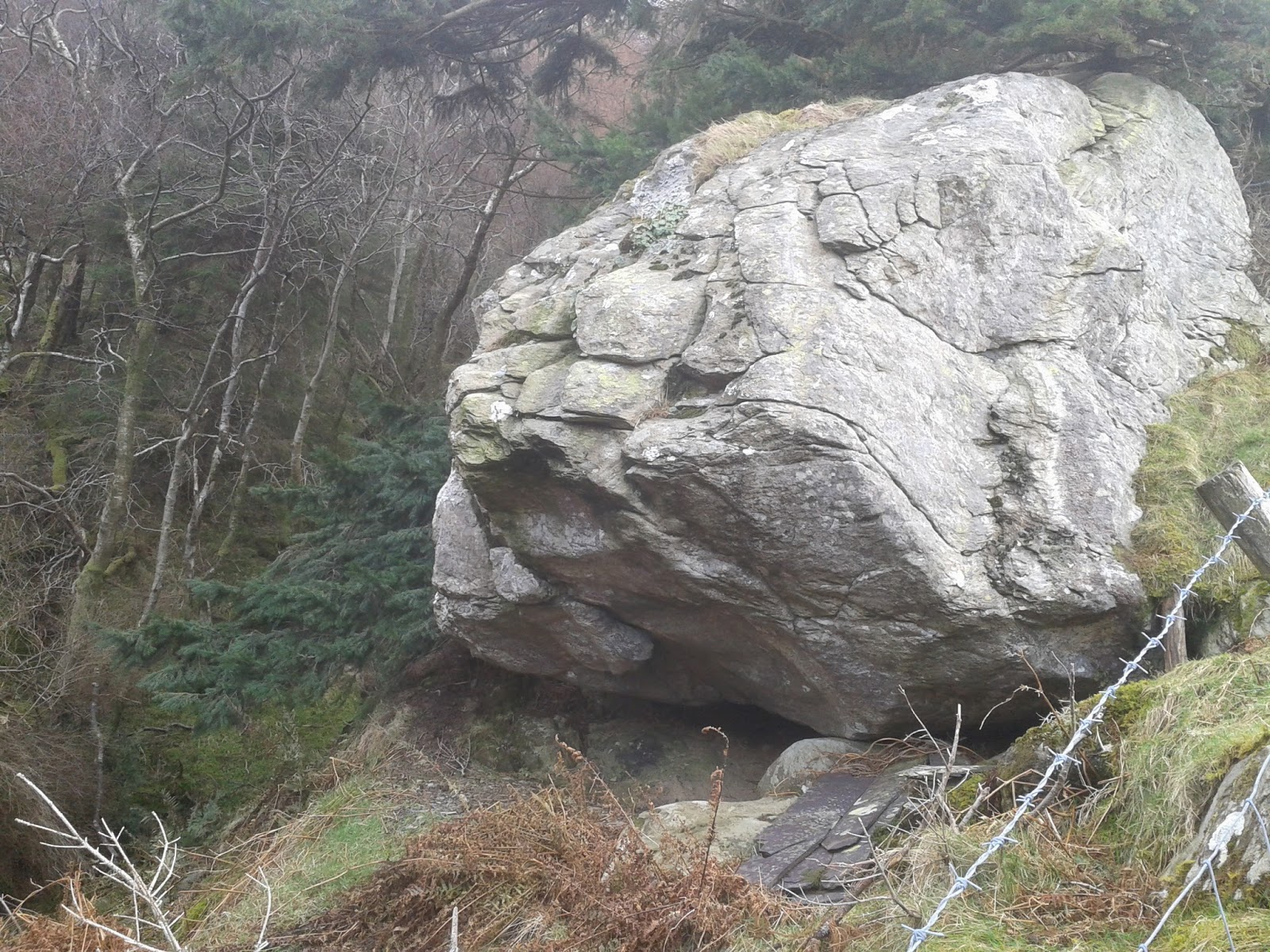 Here it is.
Not planning on working it myself so feel free. The chase is often more exciting than the catch, so the fishermen say..

enjoy
Posted by HoseyB at 13:48 No comments: