Its a harsh reality that I dwell in an area where esoteric boulderists are rife. Throw a rock into any boggy, pebble-strewn hillside in North Wales and your bound to hit one, flagrantly prospecting....


So when I heard a rumour that Noel "The Doctor" Craine and Mark "Daisy" Lynden were running sorties into My current stomping Ground of Cwmfynnon, I was compelled to action!

Obviously there's treasure everywhere, and I have been known to brazenly fling the hard one fruits of my own prospecting to the masses like a bride with her bouquet. However I had found something special last winter and was keen to head the rustlers off at the pass.

Ben Ryle, my medium to long term partner in adventuring was recruited and we headed off today high into the bowels of Cwm Fynnon. High, because the boulders in question were at the same altitude (contour even) as the Mallory Boulder. Luckily Ben has his ML so I let him lead. 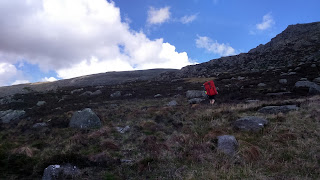 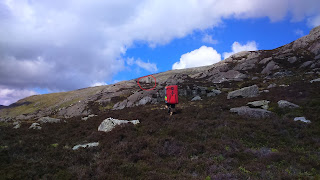 This turned out to not be the boulder we were looking for, However, it was quite close.

This is the Boulder! 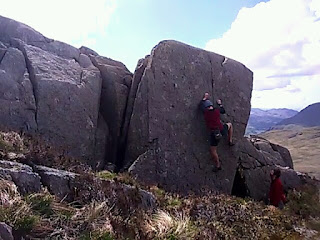 We chose the left side slab as our warm up, It proved to be trixome and a little snappy under foot. much plopping off ensued. Ben Is just about to plummet in this pic...

I eventually bagged the summit. Here is the FA vid of "Pop 'til you Drop" 6A+ish

After that it was onto the main event. I Dragged Ben up because I really wanted to do this overhanging blue collar offwidth. It started at fists and flared to 7 inches. it was tall, and it was scary.
Here is the FA Vid:


There Will Be Blood 6Cish with a ! for Fear!

The widening of the crack coupled with the gentle overhang meant that I was whitey-ing in seconds. A climbing robot would have inverted early, stacked, and spun back round into a knee lock at  around 4m. I swam, laybacked, compressed and threw a calf lock in, all of which just convinced me I had to top out or face calamity. Fair to say it was emotional.

After that I had a bit of a lie down, and left Ben to bag the rest of the FA's

Here he is on Conventional Acrobatics 6B ish, complete with comedy tripod collapse: 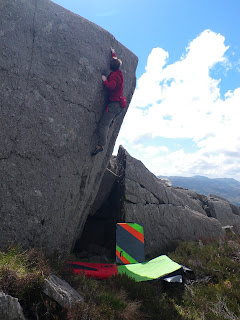 And here I am bravely repeating it, despite still being pumped and jiggidy from There Will Be Blood. You can see the angle of the wall (and the offwidth) in this pic.

After this we popped down a level and Ben got his own Highball done in the form of this fairy pretty slab "The Slab That House Built" 6B! ish:

The name cam from the tunes pumping out his phone during the Attempt.

I was spent by this point, and only half heartedly attempted the slab. Retreat was called for, However, our path down took us past Big G's Running Jam, and I couldn't resist talking Ben into us having a play. Much fun ensued, as can only be had by tired hill walkers, physically spent battling scary boulders, attempting to jam horizontally over a bog:

I feel the need for a more conventional outing.. Just not yet.

(Anyone wishing to repeat these unconventional delights, quest up to the Mallory Boulder, then contour into the bowl of Cwmfynnon. After 250m they should be just above you.)

Ain't Nothin But a G Thang

February's Boulder of the Month dropped into my life like a Mentos into a bottle of Coke. I'd been looking for an A-frame boulder choke to get my offwidth on ever since I'd found Happy feet at Feidr Fw almost a decade ago. Now not only had G found one, but he'd made it public, open even. Frantic texts confirmed it was still unclimbed, although Martin Crook had slithered West to East in a child's wetsuit to create "The Chubby Behemoth". It was the journey East to West; rising through the flare, That had both G and I excited.

Two days later Messrs Crook, Smith and Loxton rolled into the wall and the jostling began, My expressed interest was met by wry grins and sucking of teeth. George was keen to compare it to the hallowed 90's desperates of technicality and strain, and Bet me a Quid I wouldn't do it.

Crook was keen for the crack and Invited Action Pic Legend Glen Robbins along for the ride. Wednesday (15th March, I've been waiting for Glenn's pics) was decided on as it may not rain... (This is Wales).

I gave up stretching, what would 3 days of stretching do? 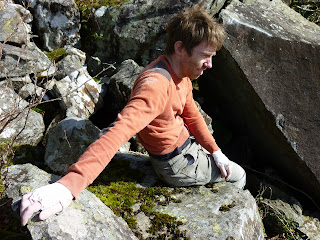 See? Glenn Robins is so good he can even make me look purty. All pics are his, ask him before you rob them.


Wednesday came and the sun shone. Martin was dismissive of the need for wellies for the approach, and trusting his experience I left them in the car. 5 minutes later, I was bouncing between diminutive pebbles bobbing in the muck, wobbling islands of cleanliness. Mental note, if this was going to be a siege, bring wellies.

Tucked away in the scree below Craig y Gesail the boulder poked into view, Tighter and deeper than I'd imagined from the pics, Damn wide angled lens. Crawling through I saw what my have stopped Big G, as the clearance was a bit on the low side. fortunately my torso was an altogether shorter package, and he could dig it out after I've snatched it right?

With a quid at stake, I set about brushing and analyzing, visualizing and scheming. I knew it was going to be an awkward invert, and although I had some ideas how to pivot for the exit, I saw I was going to have to fight.

First go got me into the invert, and shortly onto my head. A swift talk to myself, and a leaf through the mental toolbox of cloven hoof technique saw me set off of take two. Man I shuffled hard! trying to pull the slopers into a chicken wing I felt both Quads cramp and snarl. Head plant no. 2. 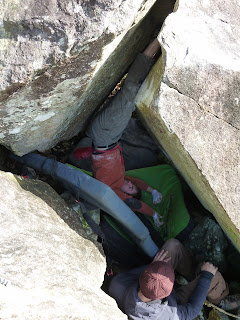 It was a pretty attractive area. Ideal for lingering in and licking wounds. Martin and Glenn were perfect to shoot the breeze with, and in between shooting said breeze, I mused on the exit. Encouraged by Martin, I hand standed into my highpoint to play with some pivot ideas. Dropping one hoof I lunged for the arete, and almost got it too, before my shoe crept off my heel and I plopped out once more.

Well it was a good spot for a siege, but I knew it was possible... Rest. Breeze must be shot. 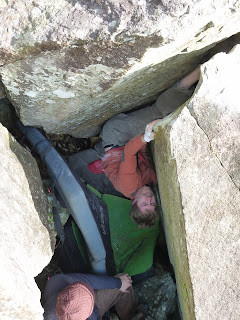 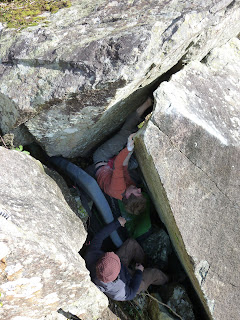 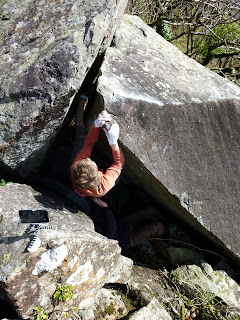 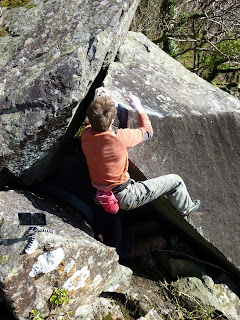 Randy Roof is easier than Georges Crack, and Comparable or maybe a touch harder than Big Bad Bari. Its named after my recent inspiration from Randy Leavitt; Offwidth legend and recently kicking some serious butt crack on Instagram. Cruising wide aged 55 or so. Still time for me then...

Turns out The flurry of chalk attracted other would be contenders. While hardly a trade route it pleased me to find this link to Mid Wales' Wad Mike Allday bagging the second ascent, and demonstrates how strong  he is by facing the other way...