You know in the movies when the hero confronts the bully in the car, and the bully gets out of the car, well unfolds his giant frame out of the, frankly small, car. One of those bitten off a bit much moments...


I went in to abseil the Shard last Friday, on the dry day of the latter half of February. 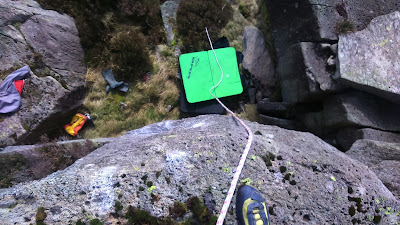 My highball mat seemed very small, and the rope dangled far out from the bottom. 6m high, and about 50cm overhanging at its furthest point maybe. Good solid, rough rock. Not many holds.. 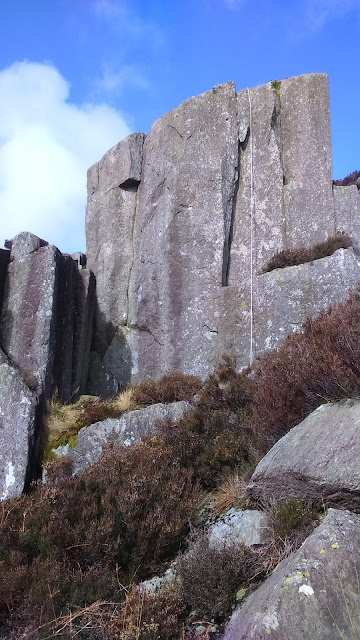 By the time I'd found all the useful holds and got them chalked, I was certainly questioning how quickly I could get this done. My calculations soon indicated a need for many more mats and a spotter for proper injury prevention. I'll need at least 4 mats, with a bit of shuffling. I also need to get much more stronger. There's a mono pocket undercut for flip sake... 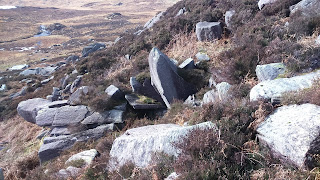 To console myself I checked out this other block I'd spotted on the last visit. Nothing like a quick send to boost the spirits.. 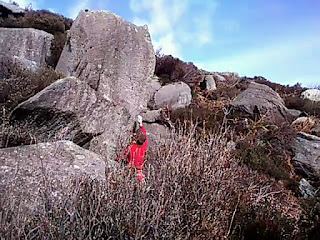 This wonderfully faked footage shows the length of the initial dyno I'd need to make. From there  is another huge chuck to the top. Poor feet throughout. I went and repeated The Goodie to cheer myself up, and then ran of to work (literally, at least as far as the car..) 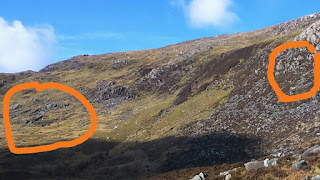 The View from the top of the Shard. The Right hand circle is the Super prow (this years Patio Project), and the left is a boulder field that I found a photo of from a previous visit recently, some steep rock there.

Stepping off Once Again

So after a few forays round the slate quarries, and maybe a resurgence of psyche for slippery sharp adventure, I decided that I needed a new plaything in the Mountains. Something new to be afraid of and drawn to in equal measure. 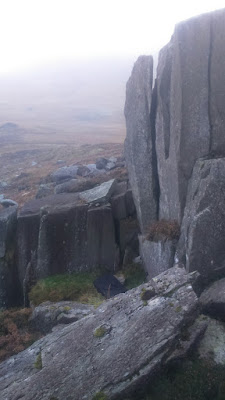 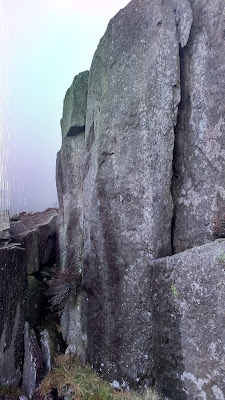 Nicely Highball. Suitably Difficult too, however there was some doubt as to whether it would allow ascent or try to crush me like a bug. First mission was to climb to the top round the back and give it a kick. This proved to be adventurous... 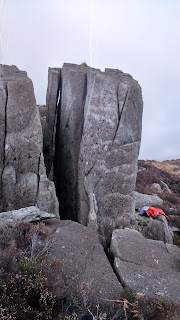 It did survive the kick test though, so I started finding out what was keeping it up. The shard is in front of this big block, 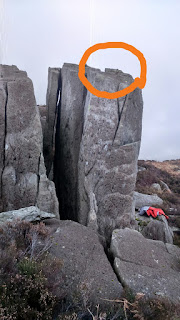 It is lapped in place by the big block... 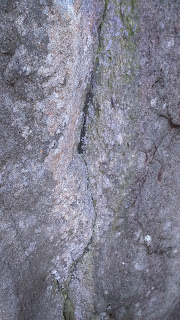 And the big block is sort of tied in... 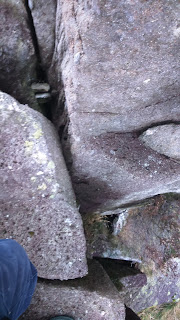 So first tests are proving positive, next the landing.. 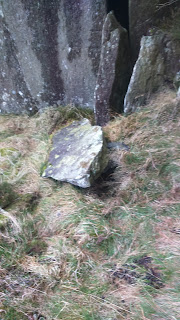 Massive surf board. Enter the Jack! 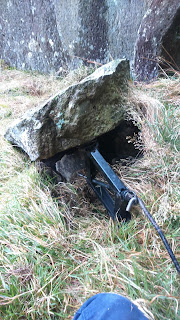 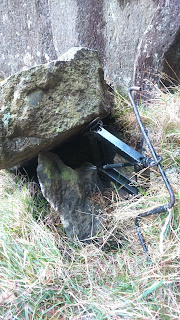 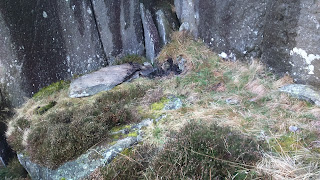 Landing sorted. Now I just have to try it. It is safe to say I am rather excited, and a little crapping it. The landing is still bumpy but not a patio candidate for many reasons:
1) It'd look rubbish
2) The lumps are only mat depth, so 3 mats should sort it.
3) We are in bog land, no material, and it'd stand out like a turd in a punch bowl. 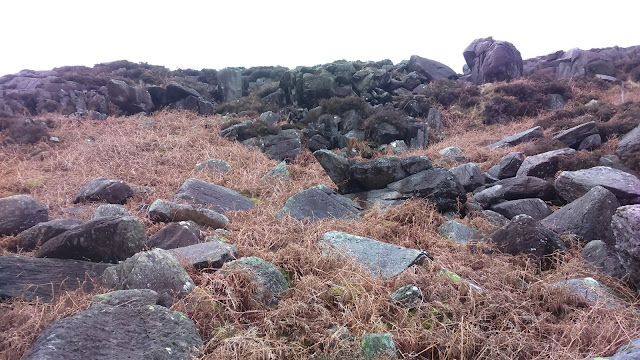 There's Treasure Everywhere
Posted by HoseyB at 04:12 No comments:

New Friends, Old Friends, and the European Enclave of Mordor

Took another wander today to look at Harold's new routes in the top of Lost World, a tad frosty, this morning, and hoar frosted slate scree certainly made some of the scrambling quite exciting 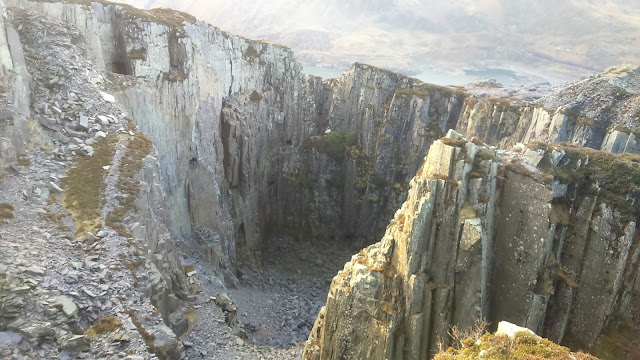 Some of the rocks scars left in Lost world do not seem as settled as I first thought... 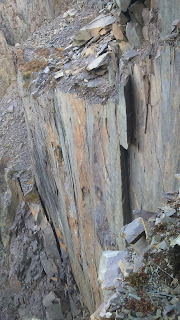 I was also tickled to see the European flag flying over the Kyber Pass. Beyond on the Willow plain, JCB's are creating an impressive grid of track ways and buildings. The plan seems to be to stabilise Yr Ceiliog (Trango Tower) so it stops falling on First Hydro's office roof. I doubt its been that busy down there since Willow itself was filmed. 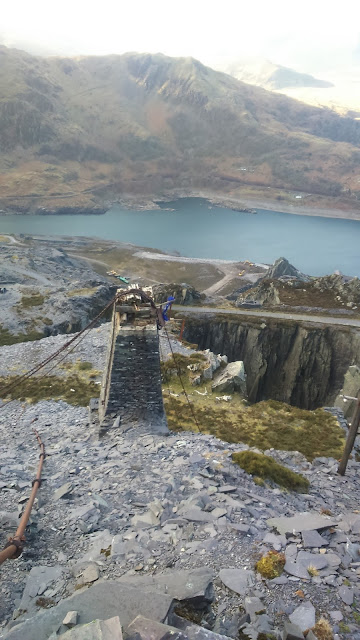 The main aim of the morning was to check out how The Beast in Me was fairing. Its been 2 years or so since I put this baby to bed, and as it has had no suitors in the meantime, I was keen to check it wasn't returning to nature too badly, or indeed falling down. It turned out the rope I had bought with me was too short, however, in the hut above was the rope I had used to access it back in 2014. The hut was dry and as it was on top of a pinnacle, goat free. 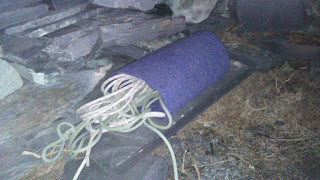 After checking it for mouse chews, I popped over the edge. 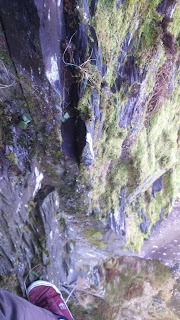 The moss managed to avoid all the holds you actually use! I was also please to find the rock all in one piece. Its impressively non flaky for this part of the quarry. 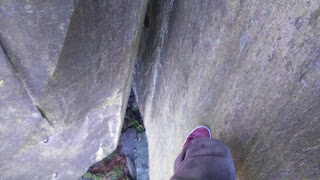 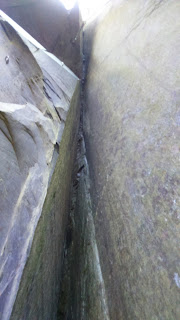 Heartily recommended if you want to keep your slate project slime free for seemingly years... 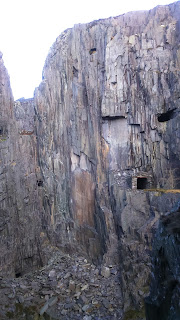 Other routes have not fared so well. Ticks Groove and Prometheus Unbound have spilled their guts.

So there it is, if you want to repeat a hardish route in Mordor, The Beast in Me (HVM) is cleanish and not in any immediate danger of falling down. There's even an abb rope (a little green and stiff...)