April has come and gone, however, it has not past without significance, as I have been for this year first proper reccy. The life of the off piste boulderer is a lonely one, and involves long walks in wellies to find rocks that looked bigger and steeper on Googlemaps 3D.
This first reccy was a little different; Phil came along for the adventure!

Loyal followers will remember Phil from when he dropped me in a pool at the Tubes. Shortly after that adventure he stepped out with Emma, the other adventurer on that trip(the sly dog). Emma wasn't available for this foray, and would have probably fell in a bog anyway as is her predilection. She left orders that something new was named after her.

The walk in was long and surprisingly unboggy, apart from the sections that weren't. The venue not popping into view until the last minute, and looked like this: 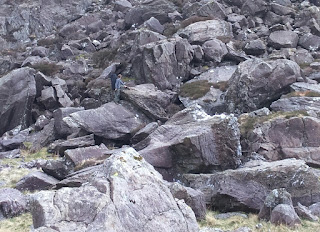 Due to a coincidental crossover of the paths of roving off piste-ers. The venue must remain shrouded in mystery. The Godfather of offpiste; "Don" George (El Big) happened upon this same site independently of myself during the same spell of dry weather last year. To prevent finding a sheep's head in my bed, I capitulated in keeping off his Preciouses and keeping the area "Off Radar".

Well we wandered about a bit and poked stuff, eventually warming up on some massive crystally bits and some dolerite wrinkles. First proper "lets 'Av it" moment was the discovery of a rather large dolerite slab. Not having planned on such things I had no ropes or highball cheating kit with me. Nevertheless, I was compelled, you can watch the result below:

The resulting highball was christened the "Hairy Scary Slab" (There you go Em), and was repeated much more succinctly by Phil as the holds were coloured in. Its about F5, or E1 in old money.

After that bit of excitement, I was aware our time was running out before family life beckoned once more. We decamped to the boulder cluster that had attracted me here in the first place. I set about trying to circumnavigate a huge flying saucer of a boulder. It was so left heel intensive, that when I tried to switch at the exit and pull out on my right heel I immediately got cramp. Much stretching later I went again with alternative beta, seen below:

This journey was ordained "Mars Attacks" and was about F6A+ and jolly good fun.

All that was left was taking on the hard looking one. A jump start saw me at the top with much insitu cleaning and gardening, basically lots of fun. This method was about F6A, but the steepness below had obvious and very real holds. Just not in any form of abundance or size (or in the case of footholds, helpfulness). The pic below shows myself willing and optimistic in setting up for the first move. Many such attempts followed with many other sequences. My Optimism waned, one for next time methinks (probably only F7A) 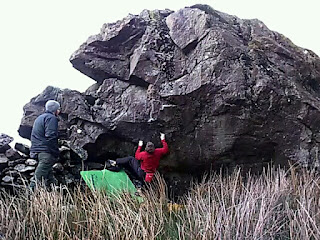 So First Foray well and truly bagged, many more planned to many other secret (for now) locations.