Worrying times. My place of work is closed, kids all at home, and a lot of fear is rolling over everything like the fog in, well, Stephen King's The Fog.
We're all hunkered down in a house we share with my parents, trying not to do anything that may bump 'em off. There's only so much Boss Baby a dad can endure, and I took an opportunity today to seek solitude up at my boulder at Marchlyn.

The fear is not overwhelming however, I had a nice friendly chat with a elderly (socially distant) lady who was walking her dogs as I set off, curious as to whether my pad stack was so I could stay up there indefinitely. Then a worker on the lower reservoir offered me a lift to the top! (I was wearing gloves, no one coughed). 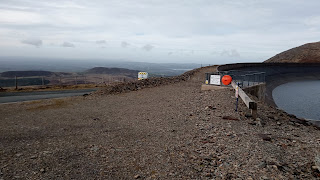 My samaritan driving off.

First time for everything and I actually had to do a bit of a warm up at the boulder rather than trying to cool down. At first I found the Connie's a bit slick, a mixture of temps, dampness and glassy skin. I fell off Tumbleweed once and took a few goes to get Ledgehammer. However the regular start to Seamus went promisingly, feeling pretty locked on the crimps.
Seamus Low has been a project of mine for a couple of years, and it has been always tantalisingly close, with no cigar.
Today I think I was just a bit more aggressive, and the simpler 'go big' beta I worked on last year meant a little grrr went a long way.
Success vid below(Andy Popp watch to the end)


As always with this boulder I'm unsure of the grade. Conditions and Psyche seem just as important as fitness. It seemed easier than previous tries, but I'm having to spin on a one arm lock off... I've always thought it would go at F7A+ so I'll go with that.

Who knows what tomorrow will bring, in the words of Theodore Logan:
"Be Excellent to Each Other"

The Hunt for the Baboon

Another month, another brief weather window allows an adventure. It has long been an ambition of mine to climb the Baboon, ever since its first mention on the North Wales Bouldering blog. It's inclusion in NWB2 and a friends successful adventure, has spurred my efforts, both with initial forays in 2018, and this month's hunt.
My approach was as usual non standard, as I was combining trips with further pebble scoping. Hence my unorthodox approach over Cwm Bleiddiaid. 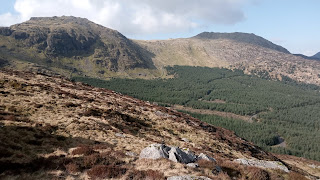 This did, however, afford myself great veiws of what appeared massive boulders. 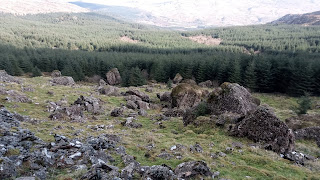 On closer inspection these were a little disappointing, the rock was mainly pillow lava and covered in jugs. Chatting to learned friends I've also discovered that a rare fern resides hereabouts and loves the rock, so no gardening folks! 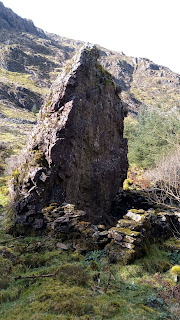 Not all the rock was disappointing. This fine finger may please someone. I was without a mat, however, and not interested in such diversions, I was on a baboon hunt. 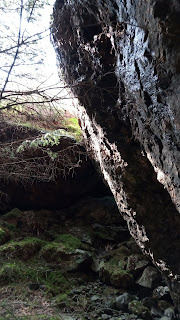 Behind a steep boulder I made my incursion back into the forest. I had a Google map pin, location on, and a can do attitude. I soon also had wet feet, as my feet had discovered an insinuating rivulet. This was in fact a boon, being bordered by swamp willows (easier to fight through) and leading straight to the Baboon! 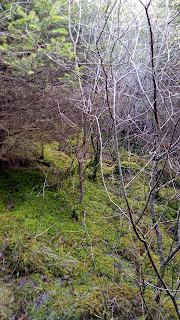 Willows and an insinuating rivulet. 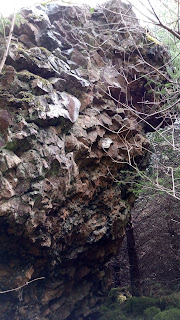 As with all these things, the fun was in the hunt. The actual quarry (meaning prey, not stone extraction) was a little damp and slimy on the left, meaning I had to be fairly selective with my hold choice.
I was dimly aware it had been done from a sitter, but a combination of no mat, concern of an impending battle, and a massive jug just above my head, led to a standing approach.
The first attempt went badly as I hit some slimy holds. It felt quite high and I became jittery about the state of the top out.
I descended and sort out the down climb so I could assess from above:

Having sat on the summit I could have left it as that. Especially as despite clocking a jug just below the lip, the top would certainly involve some sketchy Heather pulling.
But...
I sort of pulled on one last time. I've left this unedited for the full giggle :