How deep is your Love?

I took My Brother to Nant Gwytheyrn on Friday.. 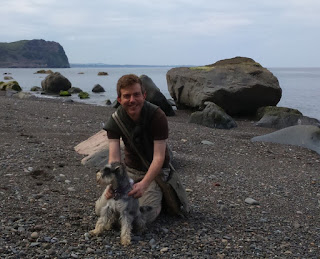 Daphne the miniature Schnauzer came along for a walk, didn't bag any seal or sheep, or gulls, but did eat a few egg cases...

So we wandered along the beach to the end, and being low tide, I couldn't help myself but have a quick scramble to check out the depth under the potential deep water soloing.. 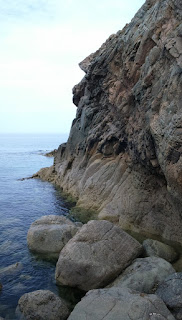 The end of the beach, and the start of the adventure 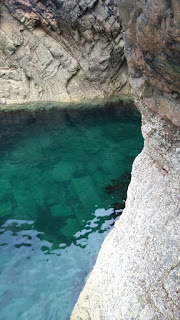 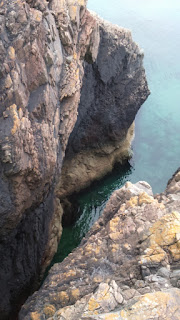 Wandering over the top, muchos steepness, and it looks above the deep... 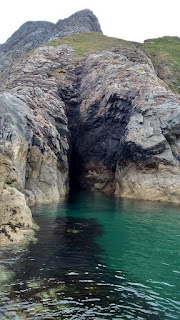 A quick paddle on the other side gave a good view into the zawn, certainly worth a visit once the sea temps improve mid July..

After a nice meal at the cafe, we moved on to Trefor, as it was the home of our Great Granddad, and Chris hadn't been before. This allowed me to pop down to Tick 10... 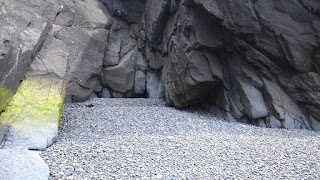 Not good. the pebbles have risen another 2-3 feet. Basically written off unless there's a mahoosive storm at the right turn of tide. We continued along the cliffs and spotted this little bay.. 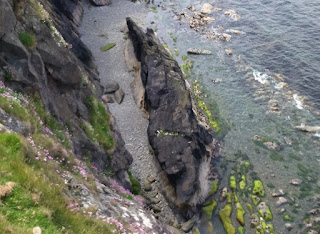 Today I bit the bullet and trudged off to work someone elses boulder problem. Yes, I know, it is normal to try established classics, even to have a series of sessions to achieve that elusive goal...

George's Crack is quite hard, quite technical, and quite long. The old guide has it at V5, which on pressing Mr Panton, was an arbitrary offering and a bit of a wheeze. However, F7A does seem about right for the level of brainwork, burl, and fitness it requires, and it is rather specialist.
I've been on it twice before; the first time was mainly flailing, as the description was obviously written by the large of fist, and long of limb. It took a long time to realise I was better off innovating, as one persons fist was someone elses butterfly.
Next visit was with the Wide Boyz, being a good North Wales Wide host. Wide pony was the buzz word , and Pete did laps on it with a weight vest on. A quite heavy weight vest. It goes to show the fitness and bullheaded nature required to get Century Crack done (even dragging a weight vest up to George's crack in the first place) This trip I got nowhere as my ankle was a bit dodgy and didn't like being hung off.

Today I went up determined to get some training value out of it. I started by going through my physio routine, sprawled on a bouldering mat up in the mountains, my mobile's metronome measuring off a myriad of hamstring stretches. The routine takes about 10-15 minutes and is a twice a day affair at the moment; its hard to fix yourself when you're 40.

It was a good warm up though, and mixed in with some dishes, and arm waving, I moved onto taping up. The gloves I started on the last Tosheroon attempt were shaping up nicely, and fortunately didn't smell of barnacles. Camera phone wedged on a rock and rolling, the training commenced.

1st Attempt. 1 minute 20 sec. Tried to get into wide pony, but my ankle, hip flexors or the width of the crack meant it wasn't working.

2nd Attempt. Time unknown (camera fell over) played with keeping both feet leading heel first and it seemed to work, but still struggling to make proper use of my hands.

Rest 15-20 minutes, looking for better rocks to prop my phone with.

3rd Attempt. 3 minutes. Pretty chuffed with staying on this long in invert. Discovered I could get a hand-hand stack in after the starting jugs, and I was away. A lot of struggle and experimenting got me to the end of the widening and above mat one, the stack after the widening remained elusive. I was also aware that if I got to this point, going further would be scary...

So kick up and walk the heel toes (heel first), advancing them with some cheeky wide pinches, until a sit into a hand-hand stack is possible. Walk on the hooves until you have to leave the stack, where some sneaky cups against the knees keep things moving. Once past the widening its hand-fist stack time....

Only I didn't quite get there, firstly because I was trying to arrange the stack wrong, secondly because I need to work further on my hamstrings, and thirdly because I was knackered. Still I got to the same place as attempt 3 in 2/3's of the time.

The main goal of this training is to totally crush Tosheroon, the secondary goals are to complete George's crack, and give me more motivation to do my physio exercises. All I need is a bit more invert sit up practice, longer hamstrings, and a spotter, because that top out looks scary on your own!

The Bads
My psyched-for trad project got a dusting of someone else's bolts
My back, or more specifically my pelvis is still killing me periodically
My elbows have flared up at inopportune moments
My Work life has got unhelpfully stressful
I'm Feeling Weak

The Goods
I have some cool boulder projects where I am making progress
My Tribe is going to be joined by my first daughter (4th child)
I'm making progress on my journey towards Development coach
Sam and I had our first mini-break away from the kids in 6 years
I'm getting regular free physio (thanks NHS)
Our house is having a bit of a posh make over.

So there we go.
As a result of all the mess in Twll Mawr, and with Little Miss Dicken due in September, I've sacked off the trad for this year. That's not to say I might have the odd jolly, but I've given away my projects, and will be leaving Twll Mawr alone for a bit. The fact is that with the imminent arrival of Little Miss, I'm bordering on contentment, at least my perspectives have been altered.
I am also trying to get some consensus on ethics for Twll Mawr, and will be raising it at the next BMC Cymru meeting. My views on Twll Mawr, specifically the Back wall, have be documented on this blog many times (eg here and here). I'm aware that the new sport routes have proved popular, and I know pretty much all the ascentionists of the trad routes personally, and could probably get them all into a quite small room. However, the climbing is unique and special, and historically routed in the ethics and mindset of climbing in North Wales.
Currently the Back Wall looks something like this: 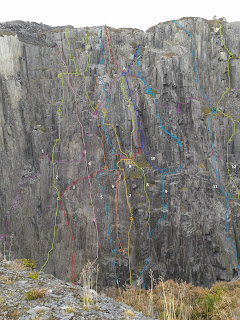 When Smaug appeared, I was concerned that it might effect existing routes, and to some extent it did, although not so much as to harm their character. I was also saddened that it removed some of the risk for subsequent new routes, and that it was in an area that was pushed heavily into in a ground up ethic. The result was Antiquarian Direct, and Twll Love.
It must be said, however, that the reduction of risk may have prevented catastrophe on the 2nd pitch of Twll Love (or prevented an awesome display of onsighting and my hardest route to date, we'll never know).
Smaug also opened the bottle. I chatted to the first ascentionist at the time about what it meant for the future, and expressed my opinion that all right of smaug should be left of future trad. At the time I thought this view was shared. When the Long Twll team starting their bolting mission, They sent me many long emails, agonising over how existing trad routes could be avoided, and encouragingly, also how potential trad lines could be given space too. On the whole this worked too.
But the lure of the longest sport route in the UK was obviously too much.
Maybe also the lure of the arete too, many people had tried to get to it via traditional means over the years, with True Finish coming closest.

Enough maudlin mumbling, if all those existing trad line weren't enough to tempt you, here's an unadulterated version to spot the blanks, and the actual lines I scribbled over.. 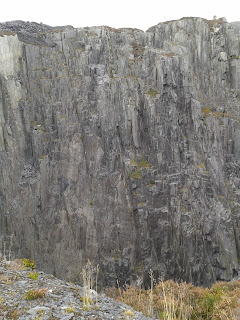 I've deliberately kept these picture files big so you can search around, The lines on the back wall are all strong, but hidden by perspective tricks. This is the best angle I'e found so far to reveal them. There's a strong line on the right that Mr brown got within half a pitch of the top, for instance...

Next Month
Get up something
Stop aching
Stop moaning