Hee hee I just wanted that to pop up on UKB...

Anyhoo, This year has been one of trying to be normal, then tentatively getting back in the saddle of the new. Twelve open projects, well... Opened, and new routes in Twll Mawr.
Next year is simply the logical continuation. Complete the projects to a level of personal satisfaction, and get happy in Twll Mawr.

Today I got out for a visit to Open Project June: 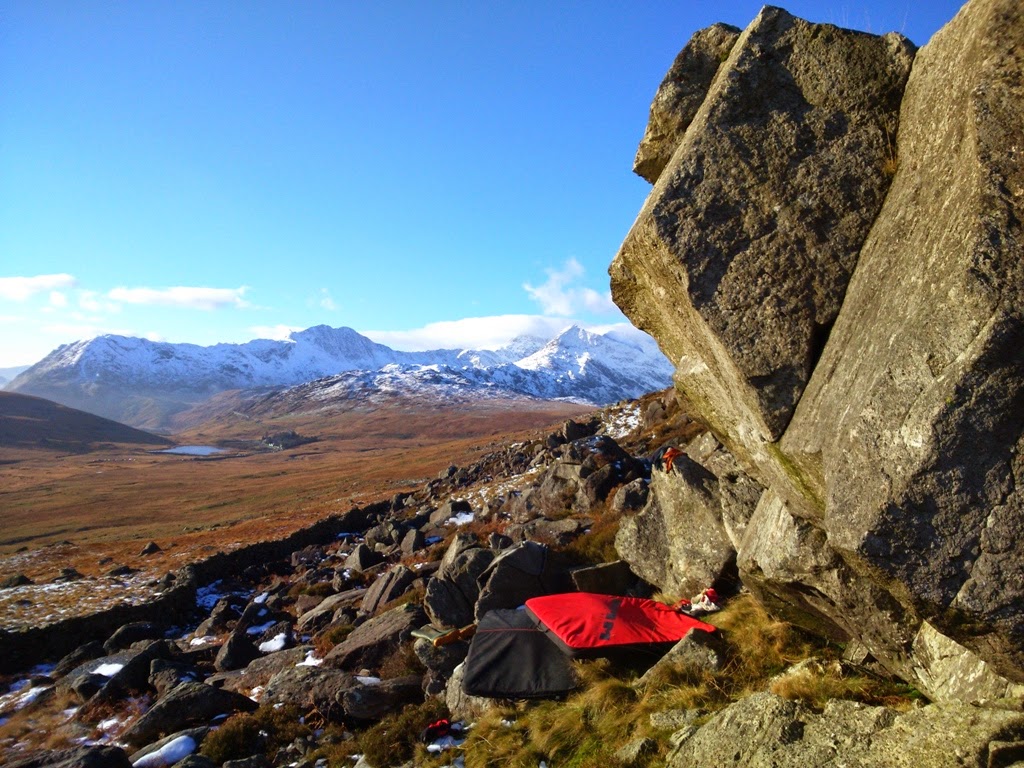 Unfortunately I chose to ignore my advice about walking along the inside of the wall, as the path outside looked so easy and flat. I obviously forgot about the bottomless blubbery bogs....
(socks, trousers and wellies drying in the sun, went above knee but not as far as groin..)


Time was limited so I rigged a rope and cleaned the next toy; the left arete. 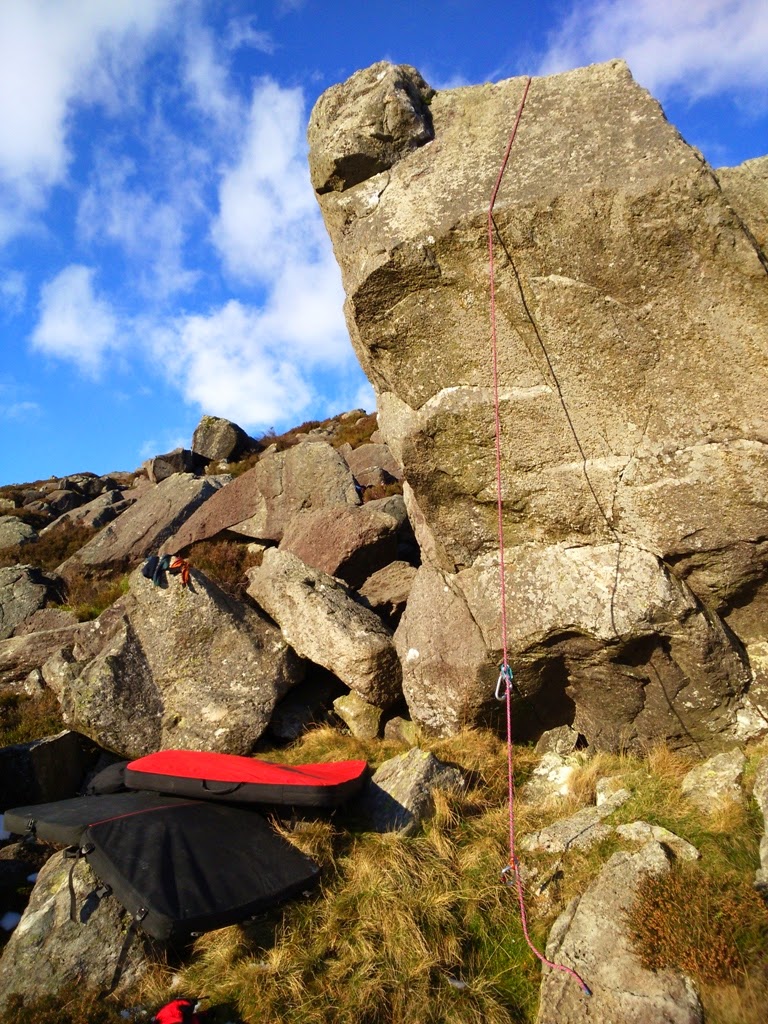 I only went and got it 1st go! and enjoyed it enough to repeat it for the cameras:

So as well as The Cube, Tosheroon, Neverfall, and of course the SuperProw are in my sights..

While Upper Dinorwic continues to shuffle its pennies down into Tasmania, its been the big collapse in Lost World that has been the slate quarries big noise this year. I got a chance to pop up and get some photo's this week. 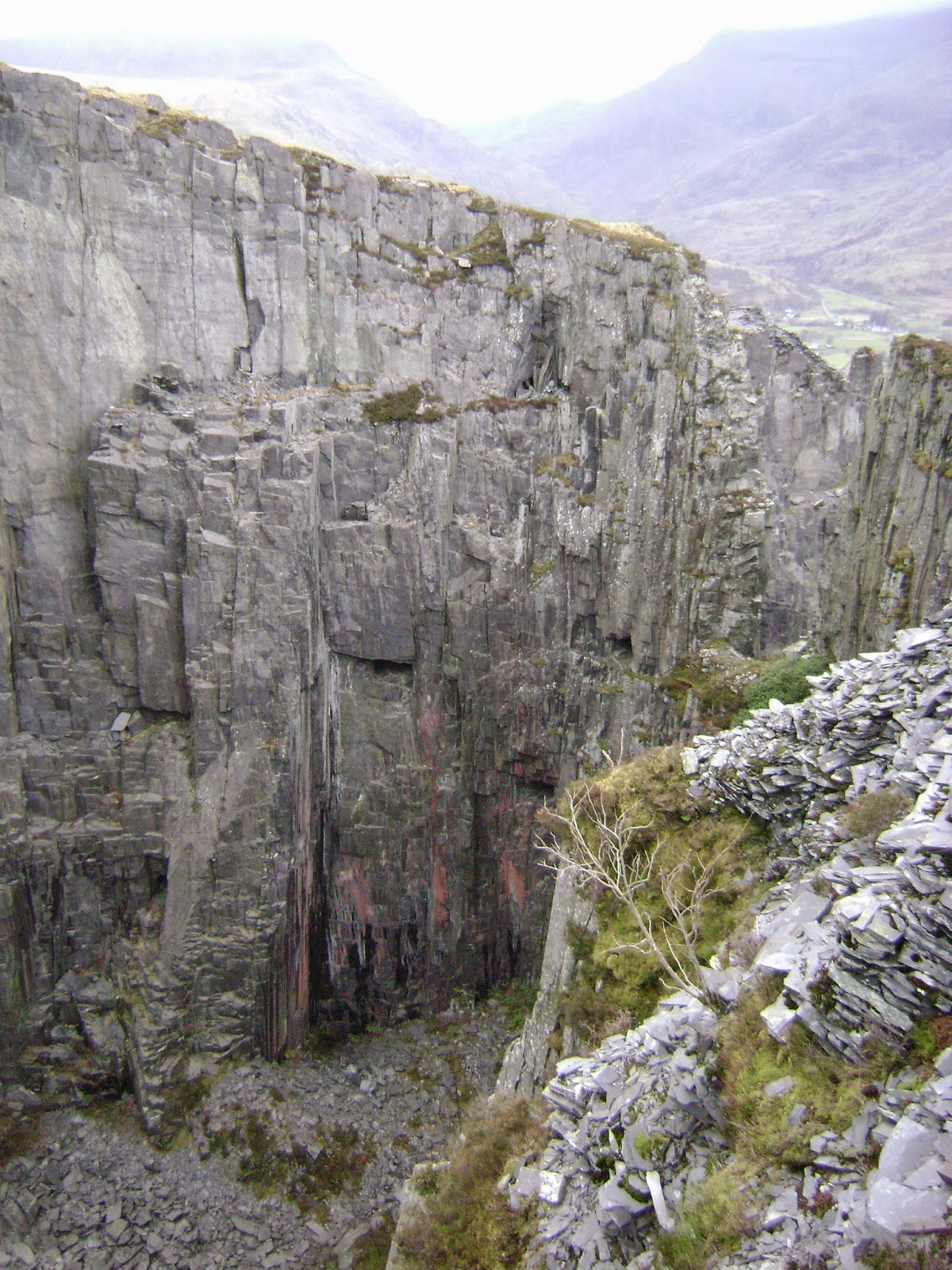 The topo shot used in the guide, what was...

Things started with the big buttress right of the Coolidge Effect, here's a pic from the mine explorer site:

This has effectively remover A Small Rusty Nail.... but the rest seems intact on a macro level, rather than the small stuff, stone fall and ricochet. What I mean is that the buttresses are still there.

What happened next is rather more impressive.. 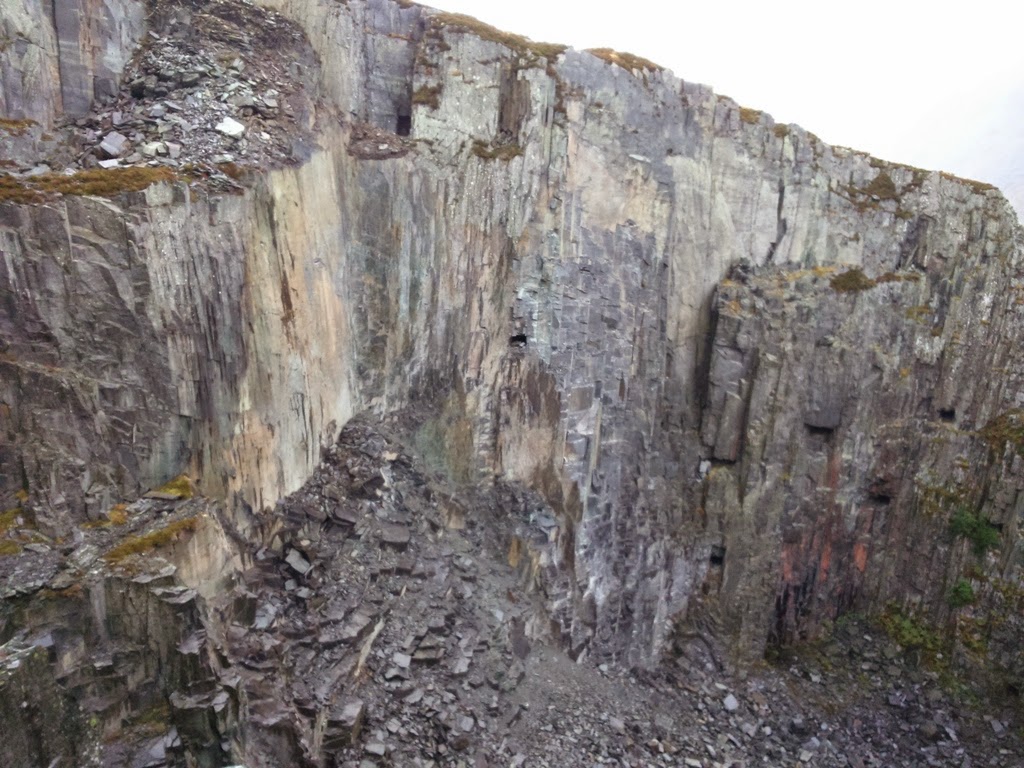 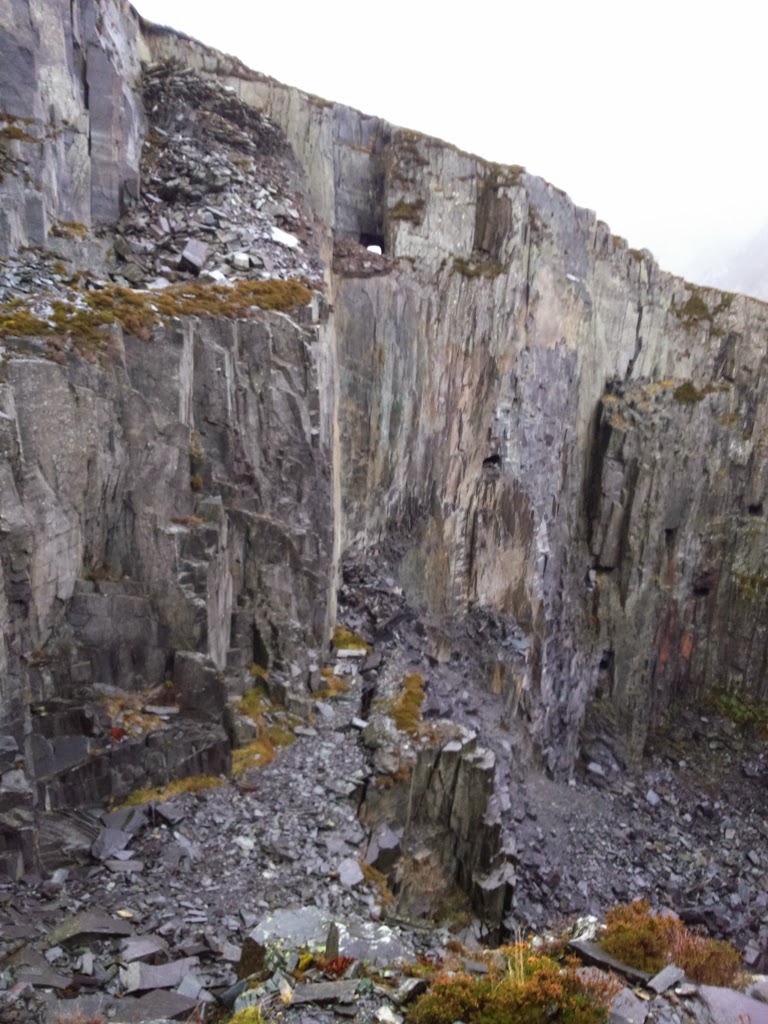 This massive collapse means two things; the old Sunday walk across from the coat hut through heavens cutting is no more (although project climbs either side are still accessible and intact), and a new and impressive,  and dare I say it, solid looking wall has been exposed. Its like the fruit machine in angry birds, giving new toys....

There has also been some minor changes to the start of Prometheus Unbound: 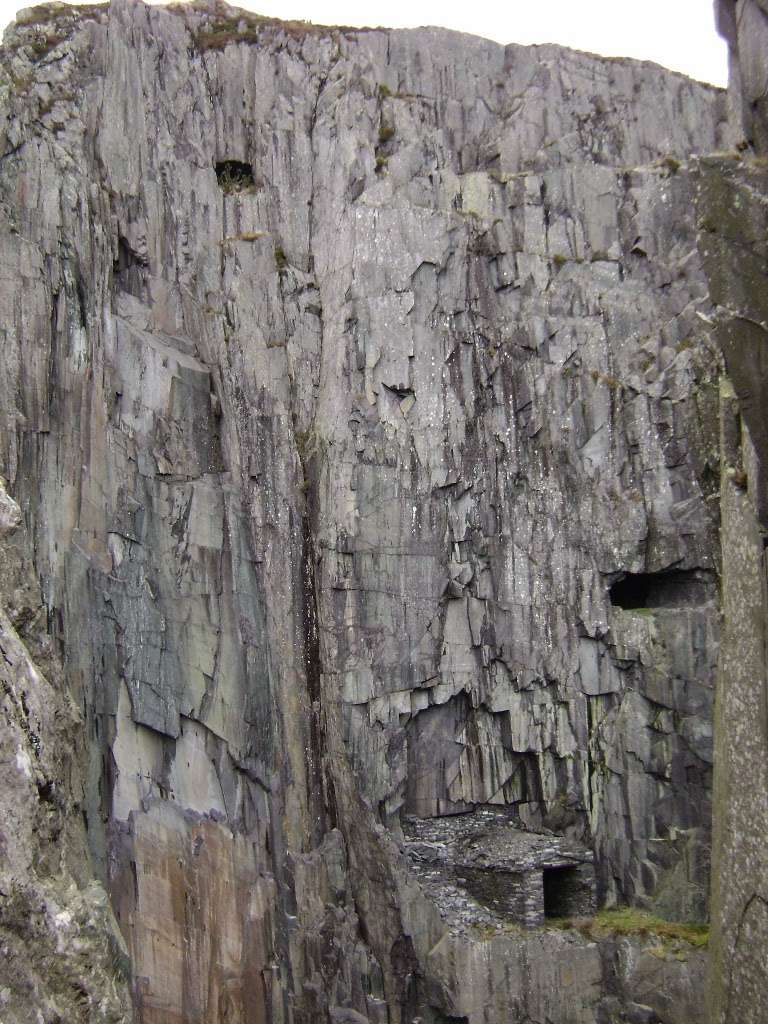 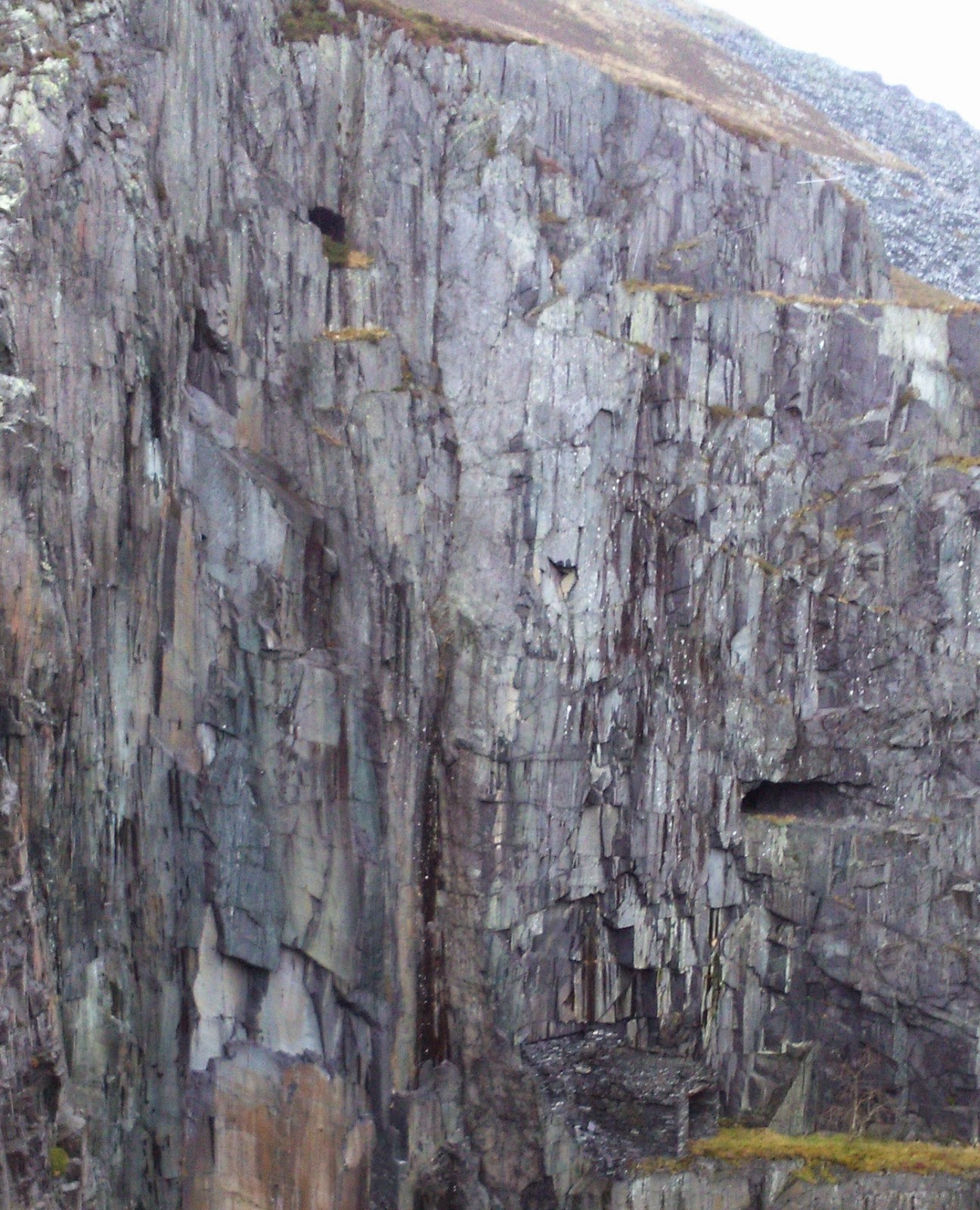 There was nothing noticeable from my side of the quarry, but it was enough to turn back Keen Calum and Big Tim. Given the activity next door, it may be best to give it a winter.

Finally got here to actually climb, After a bit of a drive round rustling up pads, Ben, Charlotte and myself rocked up with 4 pads, and Charlotte's posh camera... 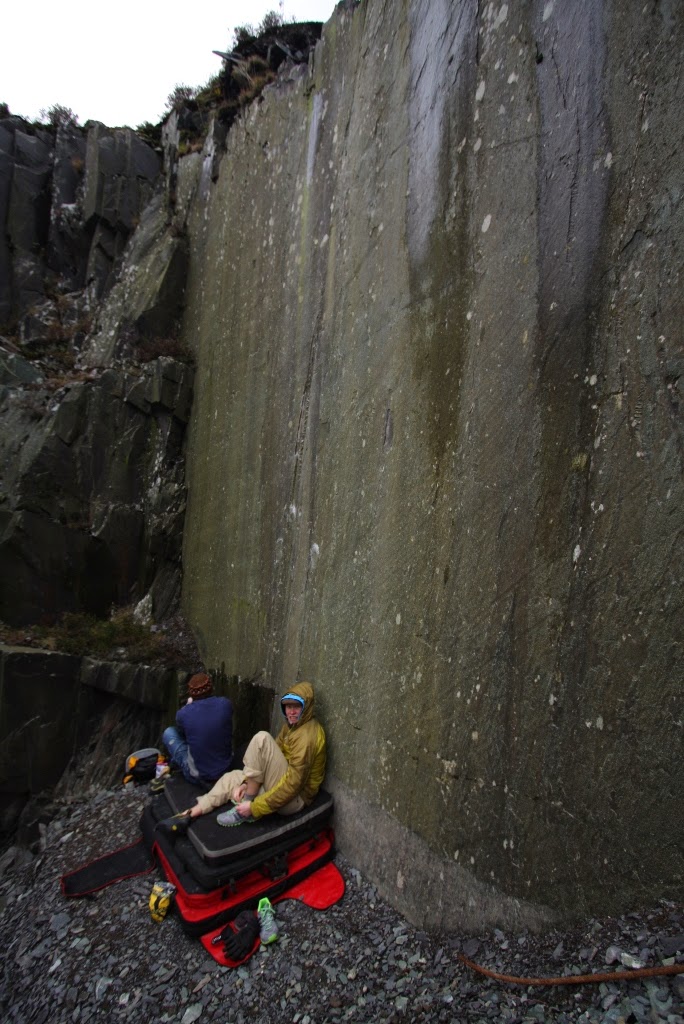 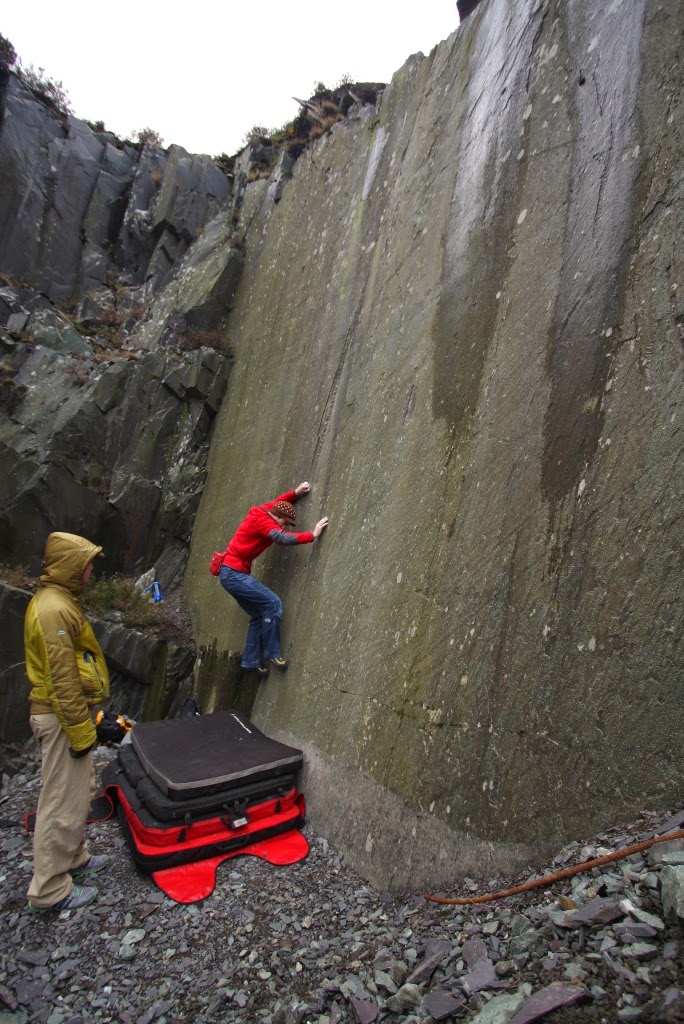 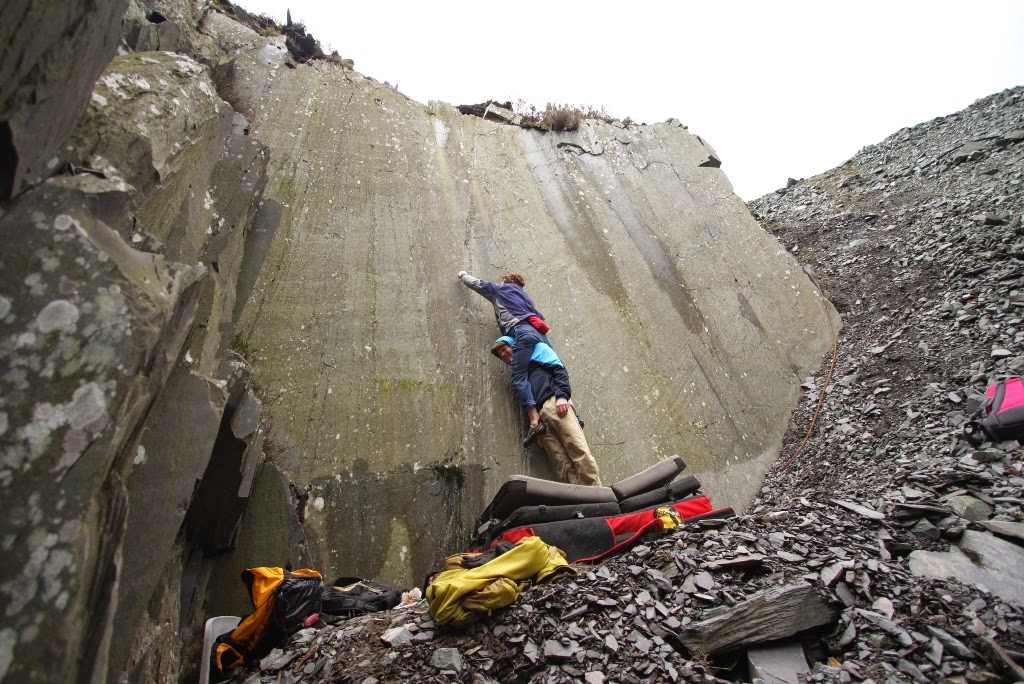 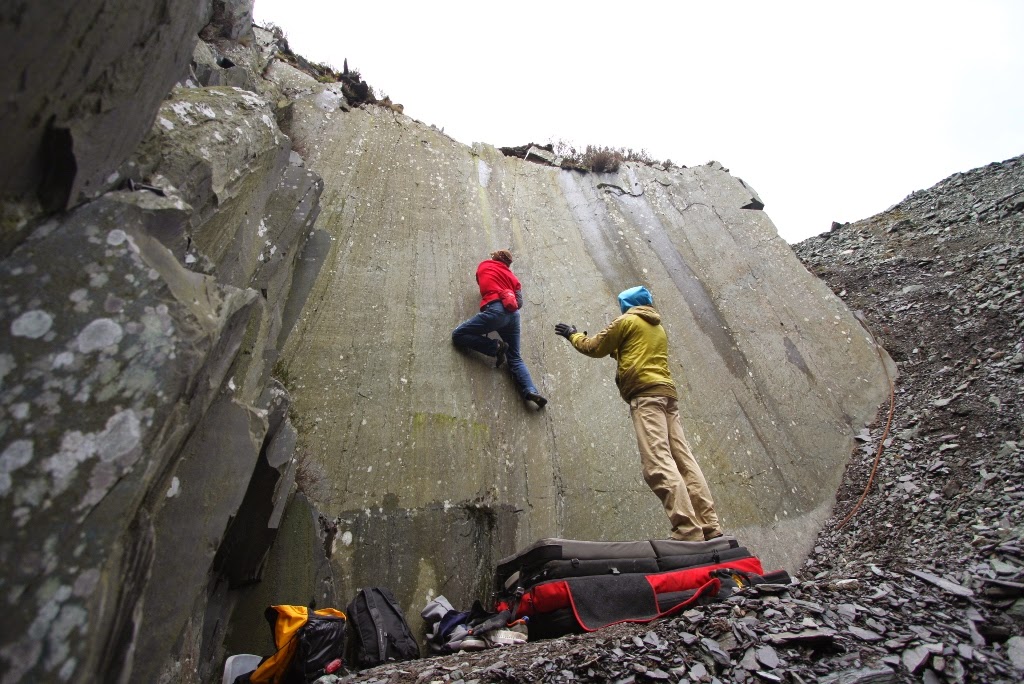 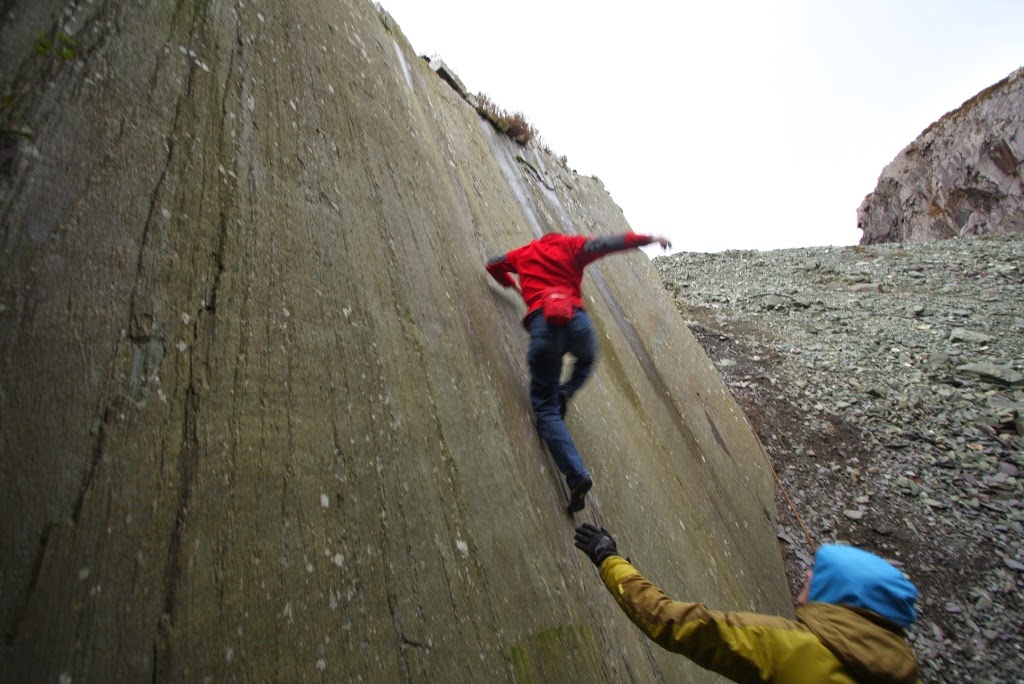 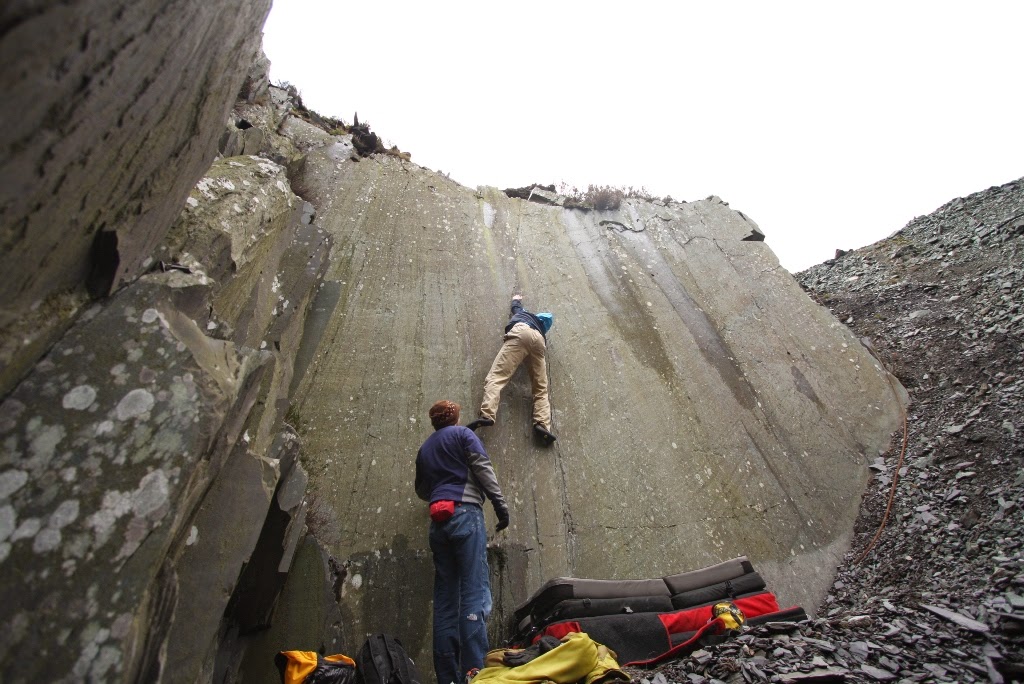 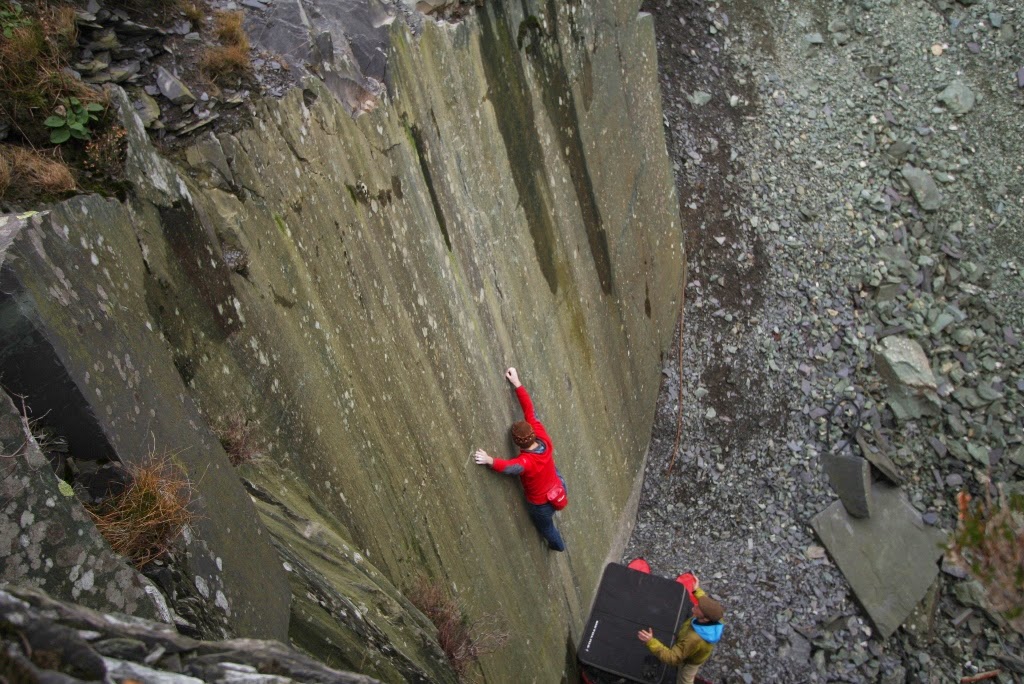 So close... my highpoint one move from completing the first section, which would leave me standing on the big hold. Section 2 looks to be a wiggy layback section to the finger ledge. At this point hands are at about 5.5m. The final section is the push from here 1.5m to the top.

Notes for next visit:
Warm up at Suncharm ledge first
Take abb gear for any further cleaning
6 pads would give the breadth to the pads to reassure on the layback moves, as well as stack up for the final section. 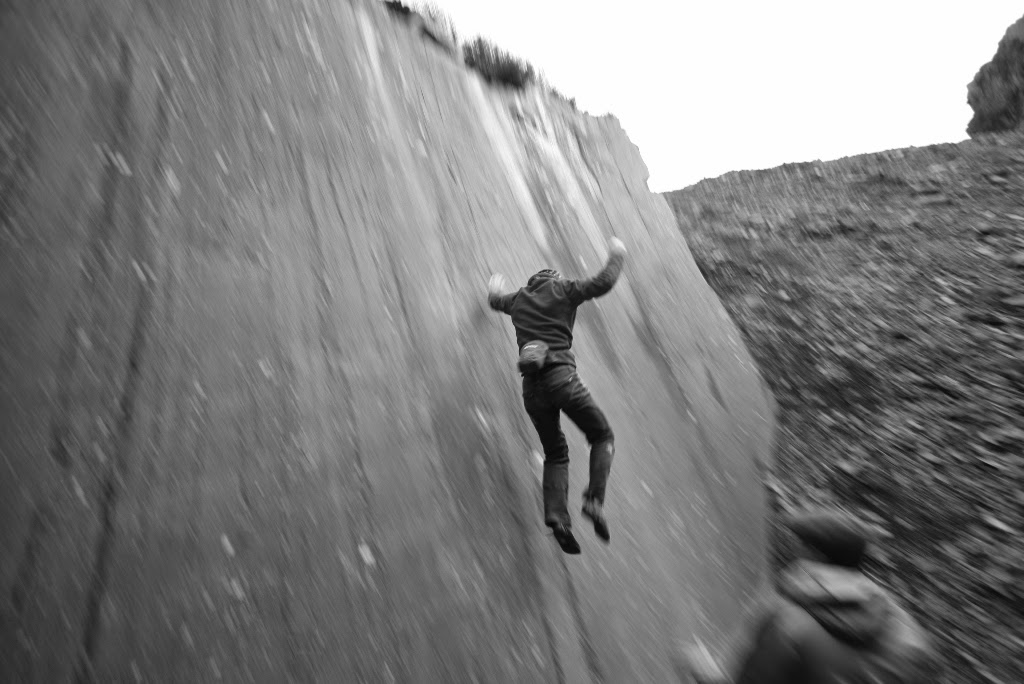 Thanks for the pics Charlotte!

Open Project of The Month - December

....And so a year of Open Projects comes to a close. I (or anyone else for that matter) have yet to bring closure on any of these puppies, but now at least they're out there, tried and in the public domain. When I started this project it was as a slightly broken man, I thought of the  big unclimbed lines I knew of and really wanted to do, despite being way out of my league.

Well I've been trying them, and maybe they are not out my league... we'll see what next year brings. Enough of that, that's for a post later in the month.

This months project is a Christmas gift; I found it in March and have been saving it as something special, hopefully to be realised as a team effort. However, December arrived and arrangements with wads failed to come together. So off I went; two mats, a pair of wellies and a Dream... 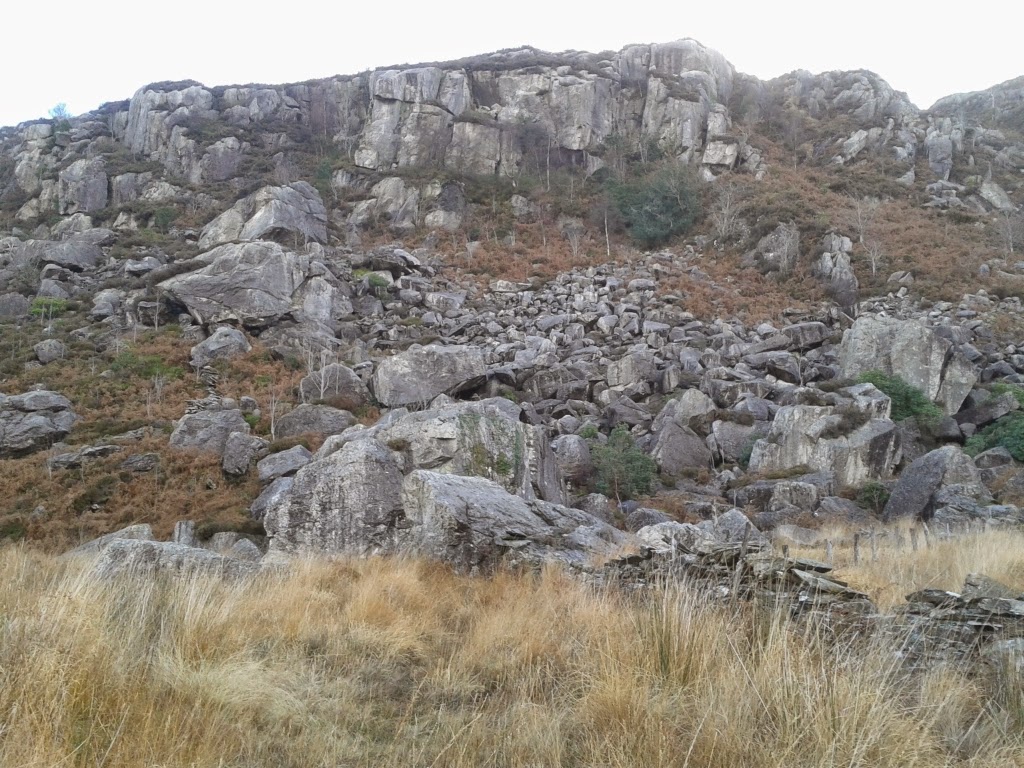 Now Nantmor has been well explored in the 90's, with many padless classics developed over the back of Craig Bengham bach. I myself had been on a wander many moons ago, and found a bit, but not a lot. However, with a bit of spare time and Googlemaps, I became curious about a cluster of large looking boulders on the fringes of Coed Caedafydd. Last March I bailed up through the woods on a reccy, cautiously as they were felling at the time, and strenuously, as the woods were so full of storm blown timber, that I had to use my hands as often as my feet (the woods are on a steep slope). This time I used Bing as then I could see the OS maps, and subsequently the appropriate public footpath...

Park at the Coed Caedafydd picnic spot, which has parking for 5-6 car (luxury in Nantmor) and walk up the road towards Gwynant. Take the first signed public footpath on the right. Go uphill through the field, through a wall, then zig steeply rightwards up through the woods to another wall. Through this to a big white boulder, then steeply upwards to arrive at the view above.
20mins from car, wear wellies.

This spot has a crag and numerous super boulders, The rock is rough and faceted, similar to some of the ash boulders in the pass above wavelength. This means little crimps and complex slopers, as well as a little bit of scrittle. The landings are very Ysgo/Crafnant, and lots of mats are a good Idea, as well as going as a team, and a bit of patioing. As well as huge pebbles, there are a myriad of corridors, tunnels and caves to explore and develop.
The rewards are boulders like this: 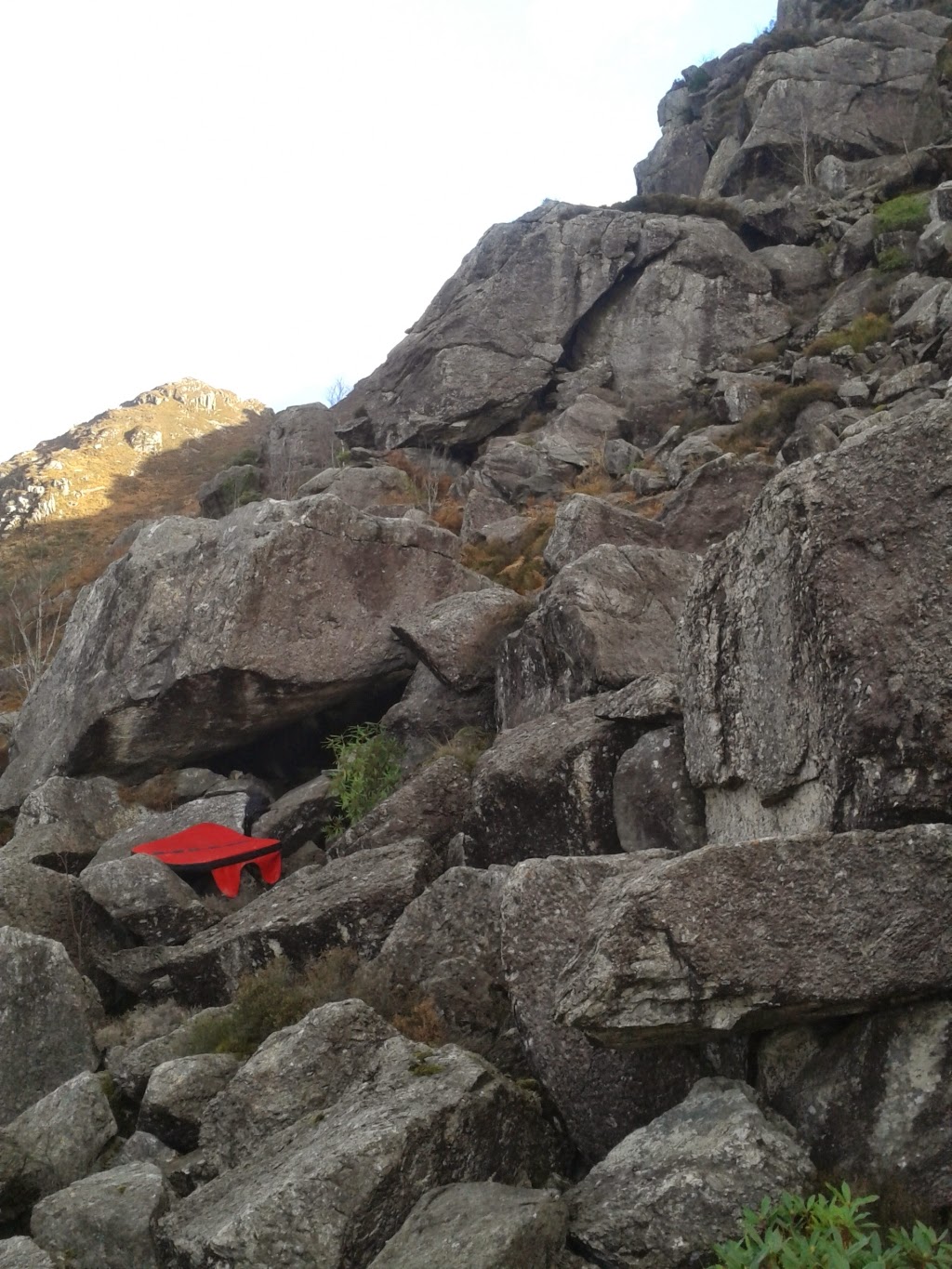 Perched in the middle of the field, a Highball mat for scale.. 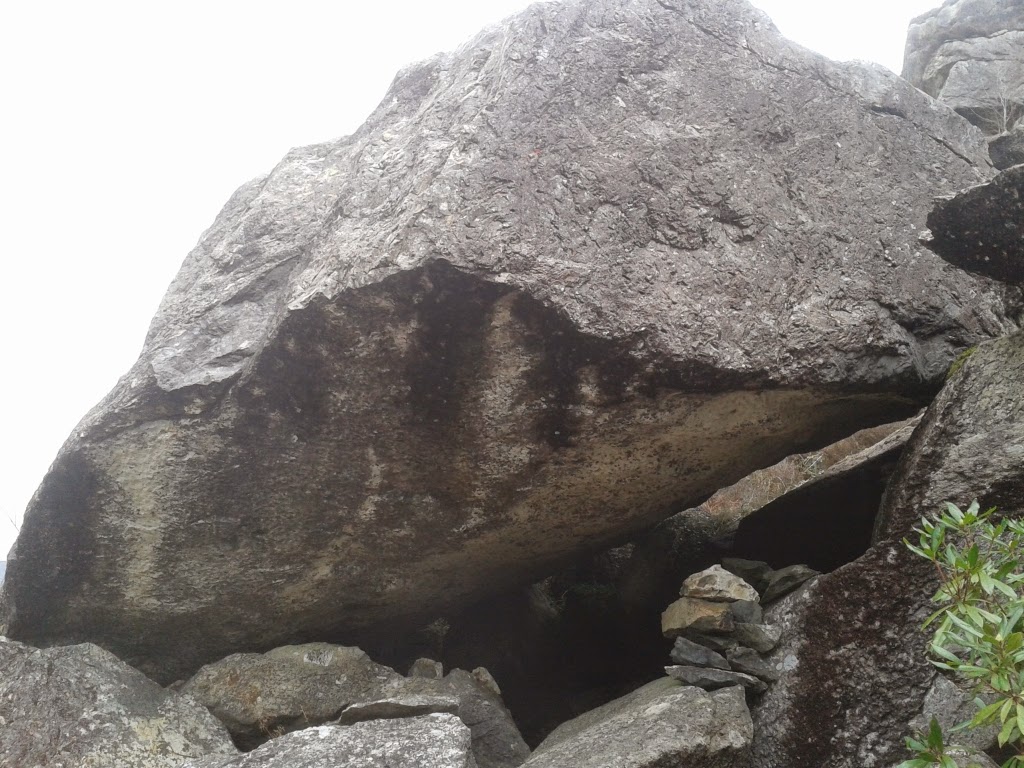 Close up showing the clear space underneath, including lots of tiny sharp pockets, a starting flake, and space to bivi 8 people... 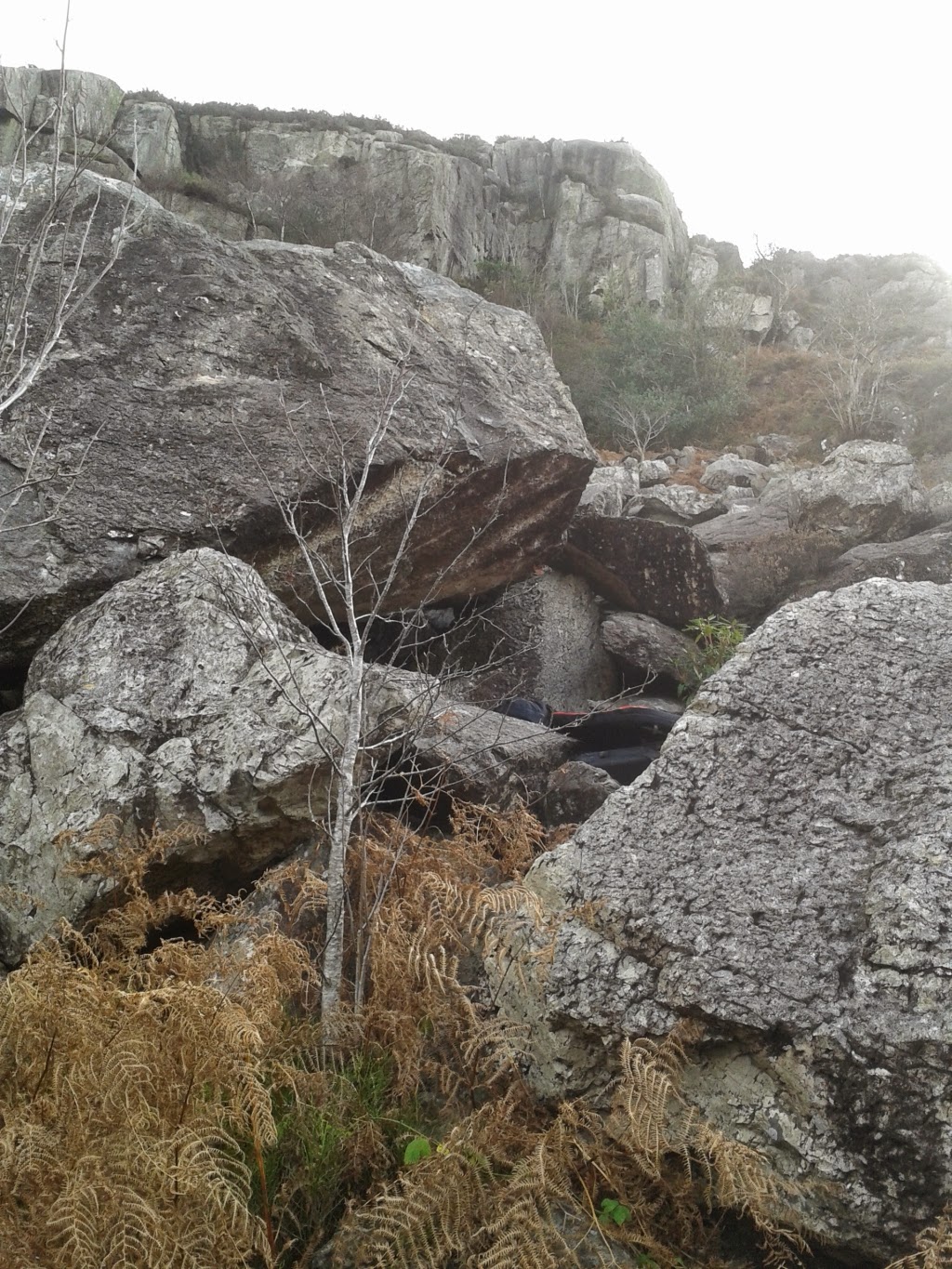 View from the side showing my attempted pad stack. the landing needs work and not one for this solo trip. I instead went left of this shot to tackle the big hanging slab. This gave Pull Test F6A+! ish and my first climbing outside since I did my shoulder in. 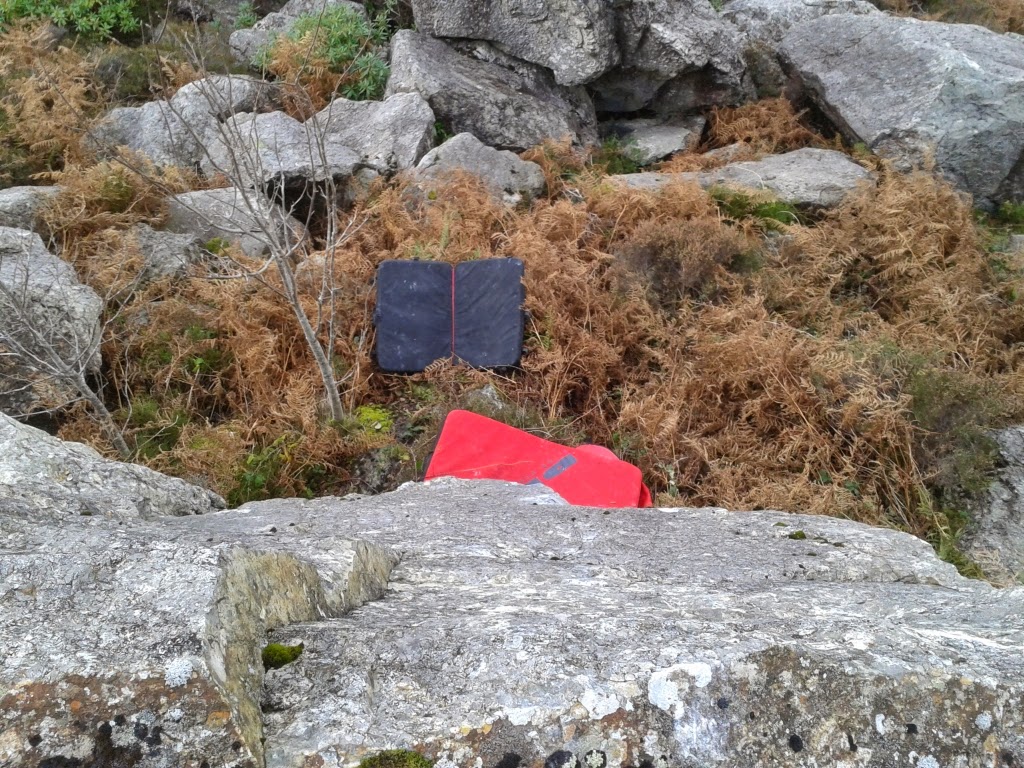 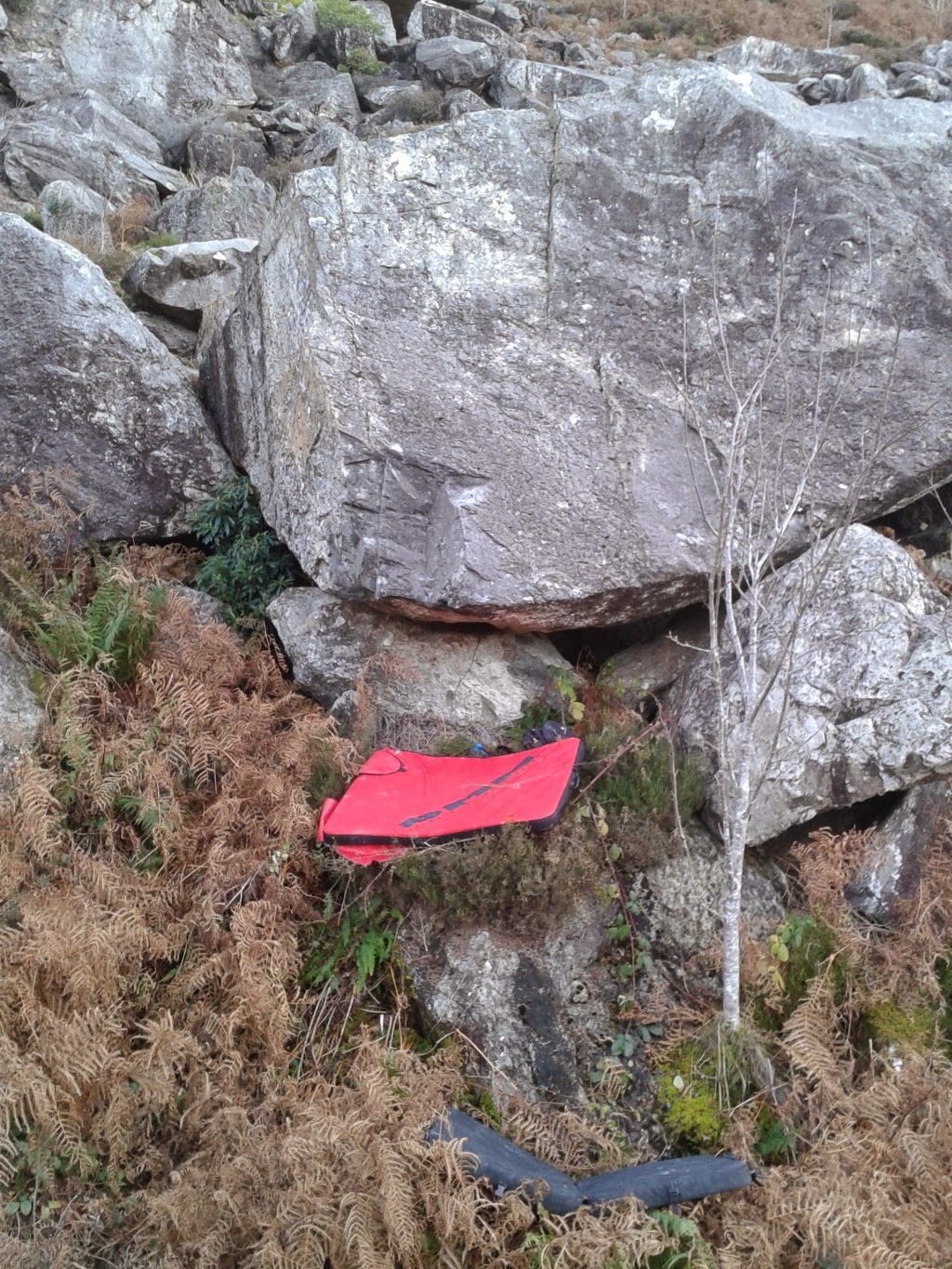 The landing was a little comical, and my numerous falls in establishing this line generally had me sliding off the red mat into the undergrowth on the left. The lip of the slab was at about diaphragm height and severely undercut, the scoop on the left provided a flatty and a slopey pinch with which I had to rock it out with extreme prejudice. However, once I'd eventually managed this I refused to fall off again and gibbered up the thankfully easing slab.

After this bit of excitement, I went looking for slightly safer fare, and picked on a couple of boulders at the front of the field.
Nkosi Arete F5. sit start on the Africa ish like flake this is the FA onsight, hence the pop of scrittle..


The Brawler F6A. Pull via pockets into the start of the flake system and follow it to the top. Straight up from the starting pockets was about F4/5.

So here it is, an area about the size and situation of Sheep Pen, and about as easy to get to from Llanberis.