It been over a month since I've had an opportunity to put finger to tablet for this blog. I've been busy busy busy with researching obscure classics patiently waiting for your ascents. I've been trying to find some science to locate boulders under forests, trying to find a new Mymbyr, and trying to be social. So far I'm not getting far with these, but we have had successful birthdays for the missus and Ethan and Dylan, and just as I'm looking at training I spannered my ankle bouldering indoors. However, its on the mend and has encouraged me to turn my attention to exploring, and even entertaining the notion of tying on and doing something conventional.

So back to I.N.S.P.R.E.
I've three doozies in the pipeline, from messr's Brown, Pritchard and Crook, but the deal is I want to at least try them first. Therefore, rather than produce some thing half baked, I thought I'd bring you the second of my own offerings....


Bring Me The Head of Don Quixote 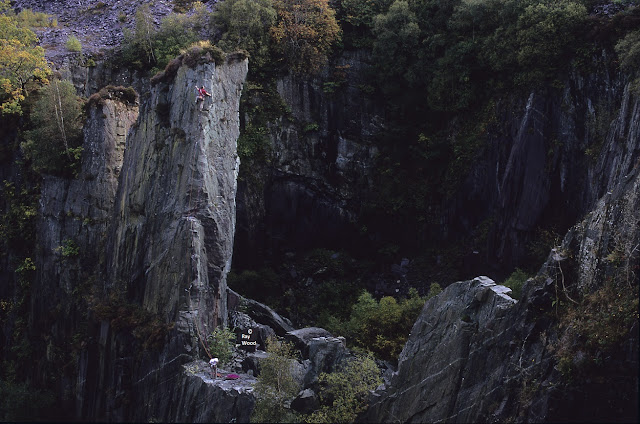 Photo courtesy of Ray Wood (I'm sure he wont mind, I scribbled on it and everything)

This is myself on the second ascent, following my first ascent. As far as I'm aware it hasn't had a third ascent (despite being all written up in the guide and everything).

On the first ascent, I was being belayed by Chopper Charlie, an enthusiastic and unencumbered individual, who may have lacked some common sense back then. Hence when I asked him to tie off a rope so I could seesaw abb back down, he just wrapped it round the pinch between two large slate boulders. The ropes were half cut through by the time I was on the ground. Hence his nickname.

E2 5a is a strange and often off putting grade. However, anyone operating in adventurous territory at the E3 level shouldn't gibber. The gear at the pedestal is very good, and there's still reasonable microwires after that. Just build a solid belay out of wires on the ground to abb off...

Back to blowing other peoples trumpets next month.