Back in the Saddle

So six months (ish) have passed. Lots of baby steps in physio, lots of little exercises. Walks and wanders, dreaming and scheming.

However, today I have returned to my love. Our of the asylum and back to the wilderness; boot and pad in hand.

Mr Fidler ( soon to be Dr no doubt) joined me in returning to a tentative loose end, found while on Deep Recon on the A487. The dolerite dominoes of Llyn Cymystradlyn may well be sandstone (I'm sure a geologist will tell us), but semantics aside, I can assure you of there provision of quality entertainment.

The approach for starters, takes in an inordinate array of bracken and bog. It wasn't until our retreat that the local fishermen imparted the arcane knowledge that boulder hopping the shoreline was a lot drier and ultimately swifter then balancing hummock to hummock across the sprawling bogs.

Once there, Dave got stuck into the big prize while I tentatively pulled on my comfy boots and looked for a lowball to toy with:

I was amazed how much I had to fight on the lowball, so low it probably deserved a ¡ After its lowly 6A¡.

Dave fought hard to make links on the giant roof, but settled on its soaring arete, which jutted proudly over a jumble of distant death blocks, definitely a !!

We had only taken a pad each, as we both had aspects of crippled on. These we placed under the bits where they could actually make a difference, leaving the void to take care of itself. Fortunately the finish was fairly straightforward. So he tells me. I didn't even attempt to pull on.

All the while I kept flailing on my slopey ground hugging traverse, eventually it relented to give the Inconsequential Traverse 6A¡
Amazed at the heady heights I had achieved after only 6 months of semi-recumbant woodlice husbandry, Dave had a go:
Both flushed with this success, we retired to the lower tier, where I quickly scored another prize.

I then spent some time trying to be a wad, by brushing the holds to its right. This was mainly in vain. Although it did help to spur Dave onto furthering his efforts to cross the horizontal steepness:

Long video, but Well worth it for the banter.

In between banter, I jolly well got another first ascent- This ones called Moby Dick (there's a whale..) another 5 probably.

Laughter. That's what characterized this trip, that and joy, and bog. Plus a bit of choss.

At this point Dave pulled himself together and climbed this:

He called it Throwing Sheeps, due to my mistaking a herd of sheep for seagulls, and claimed it was 7B. I suspect he was being modest.

We finished up a delightful afternoon by hunting for signs of the mysterious G Mawr, and stumbled on this rather pretty boulder that shows signs of cleaning: 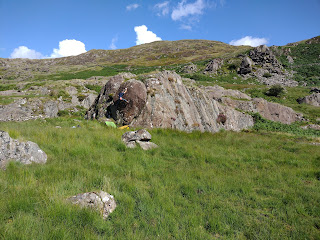 If it hasn't been done before, you can call it Eog and it's about 6Bish ( the jumble of dominoes is in the background). It was too high for me to risk, and has a bum puncher block at its base. Shame really, if it was dug out it would be 3 stars good.

A great first return, I still have to be careful, lower my expectations, as well as the risk and the height. However, I'm reassured that by keeping a steady pace I can be back to being a loon by next spring.