With the Tosheroon clearly in my sights for this year, the month of May heralded a special little trip. I had, during lockdown, identified a series of crack boulders I hadn't tried. With 3 of them all being down the end of the Lleyn, I had hatched a plan to try and get them all done in a day. A suitable tide was found at the end of May and duly written on the calendar..

Well blow me if the weather actually played ball and all the green lights flashed. Of course all the suplimentary training I had planned leading to the event failed to materialise, but this could be a benchmarking exercise instead. I wasn't going to waste the weather! 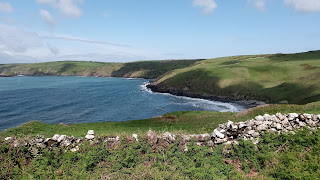 Porth Ysgo looking lovely, however my first target was Maneater at Talfarach. This venue is not the easiest to negotiate on your Todd, but once the big orange was located and its spongy patio made base of operations, I could get taped up and crack on. 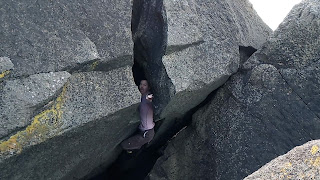 Not posing (honest) but identifying feet. I was very pleased to get this onsight (it's about 6C) although once committed above a typical talfarach landing I wasn't planning to come off. It played well to my strengths as it was basically fists and bars. The low crux being leaving/ mantling the fists into the bar /squirming section. The vid is below for geeks and insomniacs, although it took 5 minutes to to cover a little over 6m so you've been warned.
Chuffed by my initial success, I scrambled back to the cliff path and quested round to Porth Nefoedd. This turned out to be a drudge, and I fell in a bog. Fortunately it was hot, so I crusted off quickly. Nefoedd is a lot tamer underfoot than talfarach, however the approach is a fair bit sketcher. It's also hedged in by a maze of brambles and gorse.
I located Nefoedd Wideboy and quickly got stuck in working out a plan of attack. This stretched into a prolonged head scratching exercise as its far from a standard block. Once tucked under the initial constriction you can stand into a narrow triangular slot between the boulders. At the back of this is the starting point (a jammed boulder). Once off the deck, you have to dive under the constriction. Needless to say a variety of strength sapping options were applied before the award of "most likely to succeed" was claimed. Unfortunately by this point, I was knackered. I took this to be a benchmarking success and noted the requirement to get better core endurance.
This is my highpoint. 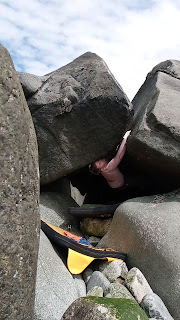 The next venue was on the North Coast, so leaving the tape on (got some funny looks driving) I sought out what I thought was a direct path back to the car.
Never do this.
First rule of Rhiw bouldering : never leave the described path!
The resulting hour of psychological warfare as I negotiated 100m of dense brambles (no sleeping beauty was worth this) reinforced the first rule, and my cunning idea of bridge building out of my pads meant I'm still picking spines out of them..
So anyway next venue. 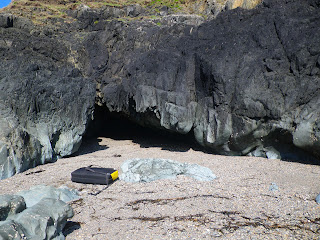 This was the fabled Jellybowl cave, old school and rarely in condition. It was a bit damp, but I was here and keen for Jellybowl Crack
This was definitely an old school V6, and I was spent. Short and brutal, it was a bit damp, but really had I been fresher, it probably would have been a different story.
There’s loads of untapped potential in jellybowl cave if you have industrial fans to get it dry..
My well planned tide window was coming to a close. The sea lapped at the ceiliog's feet and work beckoned. 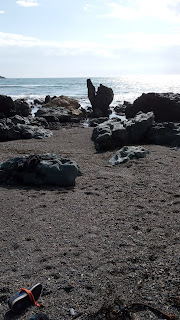 Moving forward, I've identified some good tide windows for the Tosheroon in July, so June is to be mostly about core endurance and maximising beans. Hopefully I'll have some fun too.
Watch this space