Well it had been 10 weeks to the day that I spannered my ankle. It had been settling down nicely, and was usable to climb. Indeed, I had even accidentally fallen on it with no serious repercussions.

Therefore, I decided it was time to rescue my spare pad from Marchlyn. It had been skulking up there for several months, and I was sure it would need some tlc. Furthermore, I'd need it as part of my pad stack when I revisit the Shard. 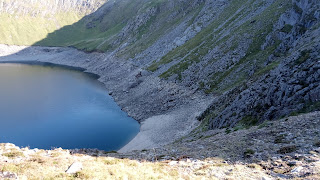 I made it up OK, the ankle felt a little stiff, but certainly wasn't shouting at me. The gully was interesting, but OK.. 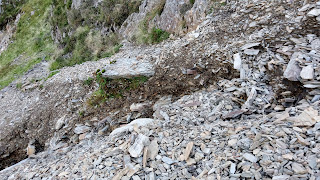 The path had been washed somewhat by the rain since my last visit. 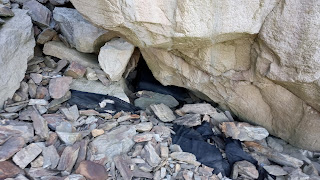 The pad was still there! Visitors subsequent to my accident failed to spot it, so I was a little worried. It looked a little damp, and as I pulled it out, I got a bit of a surprise..
I don't know if that was just rain, or if the hydro scheme had maximised their cheap electricity and boon of rainfall, and got the level of the storage reservoir over my little stash spot.. 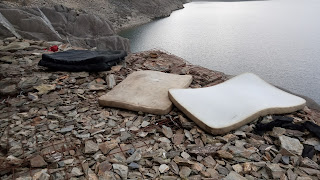 Needless to say, there was much wringing out, even then it still weighed a ton.
Keen to play, I had brought another pad up, and also my posher camera (ie not my phone). It had a 10sec timer, so I got to set up some vignettes and scamper into frame. 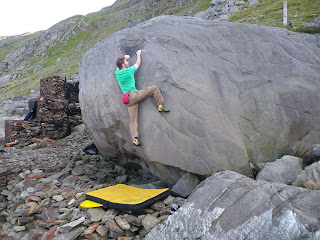 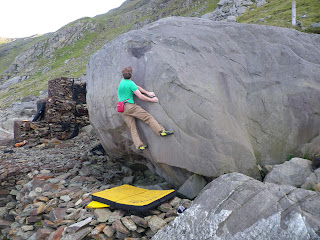 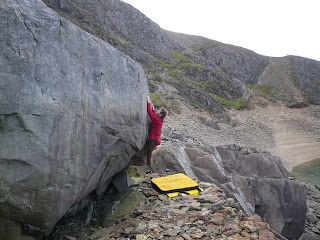 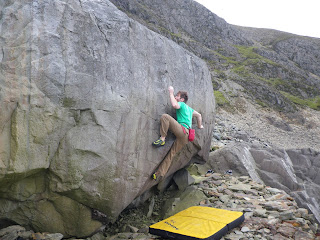 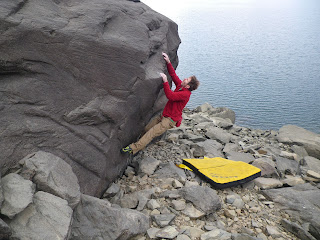 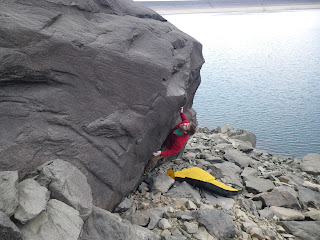 These are Trev's Last Wave 7A
Following that, and being a little warmed up, I turned my attention to the easiest of the remaining projects. To get the juices flowing so to speak.
This was one attempt of many many. Some falls more controlled, a lot less. However, the tumbles down the hill didn't result in too much ignominy or injury. I just didn't seem to be able to keep the weight on my heel, and this led to a little heel scrapage and blood letting. Next time I'll bring one of my solutions up (I'm still weary of putting one on my wonky foot).
The walk down was slow due to all the excess water my stash pad was carrying. I didn't fancy risking coming off my scooter. It's the next day now and the ankle is complaining a bit. I think this was mainly due to heavy porterage on the descent. Something to avoid I think.
Hope you're all overcoming your personal challenges, it's all part of the game. Psyched for the next episode.
Posted by HoseyB at 04:24