So lockdown meant were were suddenly all supposed to elevate our abilities to teaching our own darlings. Nevermind this was not "life as normal" for them or us, and we'd been thrown into Confined quarters with them, let's have another thing to argue about.
Fortunately, my lot were all still primary, and not really in the sausage factory yet. Throw in some smart alec-ness and a smattering of additional needs, and we felt it was best to follow "child led education".. 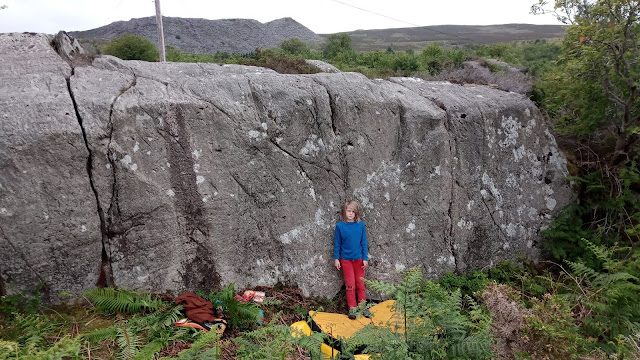 Ethan wanted to go new routing! It just so happened I had the ideal venue. Short walk in, easy to escape from, good rock and all Ethan sized. 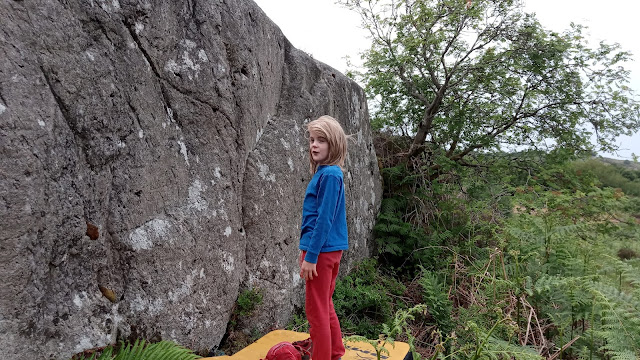 Impressed maybe? Hard to tell with these cool types. 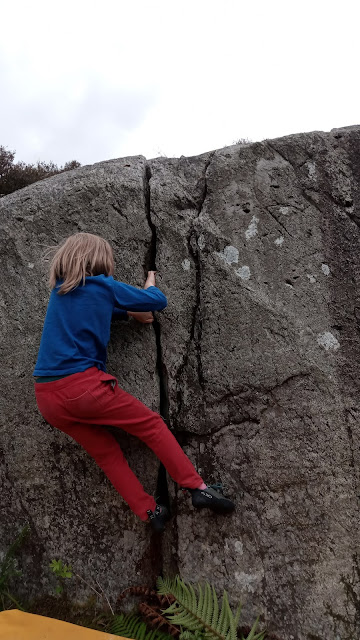 First off was the left hand crack, and a quick lesson in jamming. He took to it, eventually.. 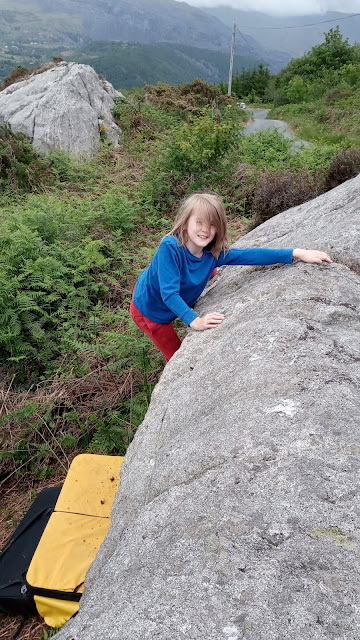 He chose to name this first foray "JamRock" , and hence crag had a code name.
We'd go once or twice a week, concentrating on a different line each time, picking off the low hanging fruit.
This is Sequencer, the key turned out to be using the holds in the right order (who'd of thought?)
One of my favourite named problems of Ethan's; Doper Sloper. 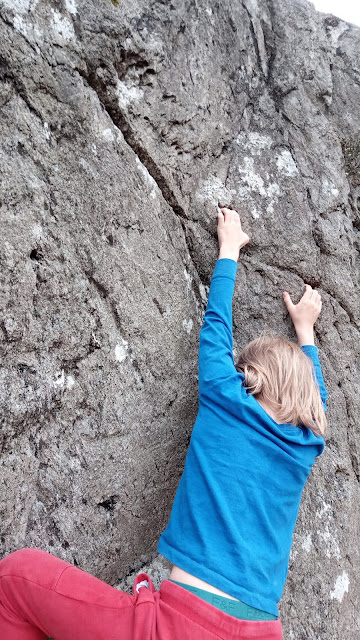 This was the first line that slowed him, tenuous direction holds meant he had to think about his feet a bit. 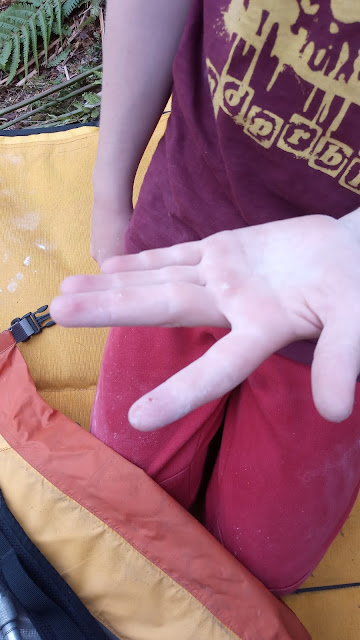 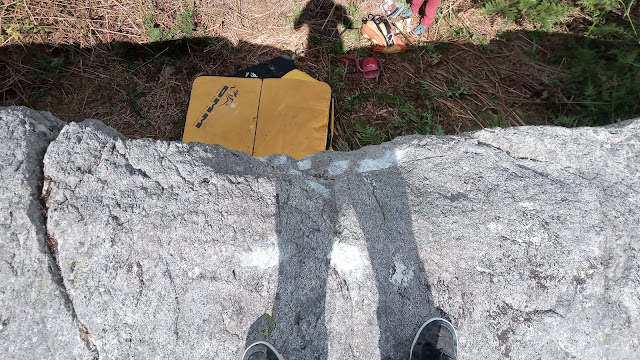 This route became "First Blood" and has a lovely selection of slopers at the top. 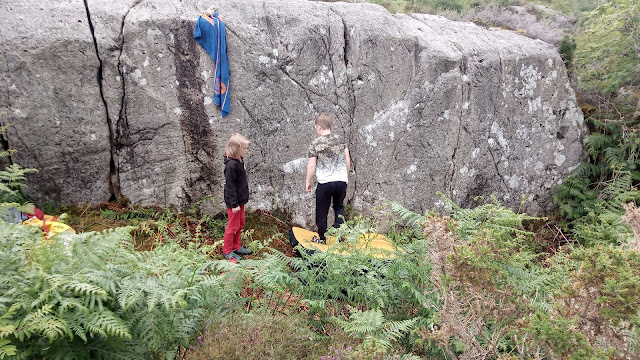 Big brother paid a visit, however he's more into sport climbing and hurling himself into the sea.. 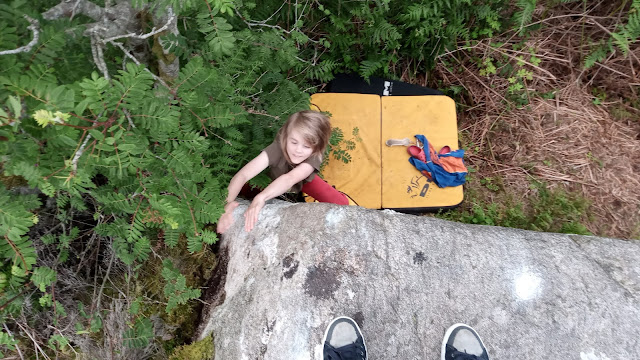 This was his penultimate send. Lean n' mean was tricky for him as the leaning arete required some forceful footwork (hence it was mean). Two sessions and an exciting jettison into the bushes later it was in the bag.
The last gap on the wall was a blank bit with a lovely pocket and a little slanting edge. There was only a little rock pimple in the place Ethan needed to plant his foot, and his stature meant he was a little stretched. Credit to him, three sessions smacking himself through the same move, watching the footage and seeing what worked, it had to go eventually..
Jurassic Dyno. 5C++ (Dad is tight as they had to have adult grades.
Throughout all this Ethan assembled his topo (although the lazy tyke made me his secretary). Therefore, if any of you climbing parents want an off piste roadside venue for your own chaos monkeys you can plug (53.1284168, -4.1528944) into Google maps. 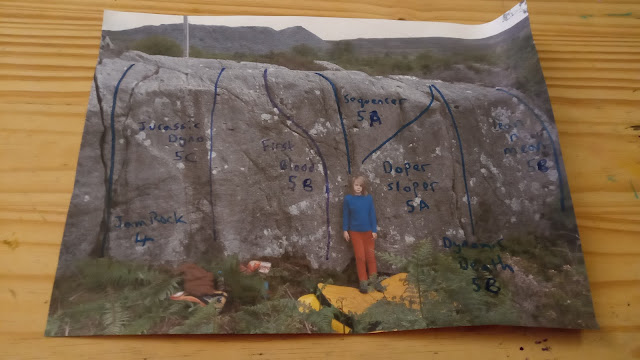 The bloc is all his own work but as the traverse was a little reach, he kindly let me have a crack.
Home Skoolin' 6B. No tops, and even Ethan ignored the foot block in the middle. 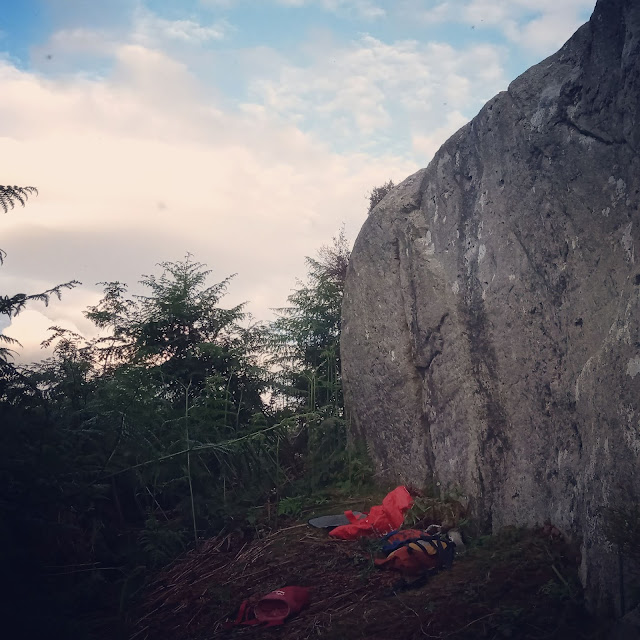 The midgets descending, well it is Summer, and the car is 10m away.
Enjoy if you visit. This is the last Lockdown Diary entry, as I should be back at work next week (yippee).
Posted by HoseyB at 13:34