Slowly finding my feet and gaining ground once again. Trips to Marchlyn have increased my drive, and I'm genuinely excited by all the born again esoterrorists charging off into the wilds of clegir and facwen. There has been a reported 80+new problems on clegir alone, and that has drawn me to reflect on my past dalliance there.
The twins had just been born, and I had 3 kids under 2 years old. I was running to stay still basically, and my mindset was on the microadventure; short trips with maximum adventure, and looking back I was also very selective of what projects I took on.
I only had 1.5 mats so many things were rushed past as for another time or person.
With the bonanza on clegir I decided to dredge the muddy memory banks and see if any of my discoveries were worth a punt before others swooped in.
Also I had temporarily ground to a halt at Marchlyn as I reached my grade ceiling, and a lack of progress triggers an automated response in me:

"Go back to the beginning and wait for Vizzini. "

In this case that meant revisiting Craig Ddaear Drwg. No one else had bothered in the last 9 years, and looking at the landings you can see why:

However, the past 9 years had taught me a lot about patios and mat placement, so I chose a few choice lines that could be calmed by a single construct and set to work: 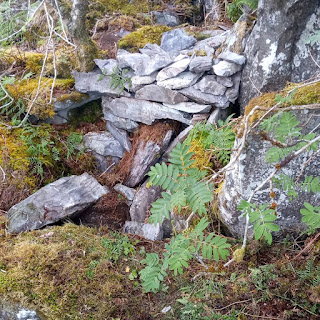 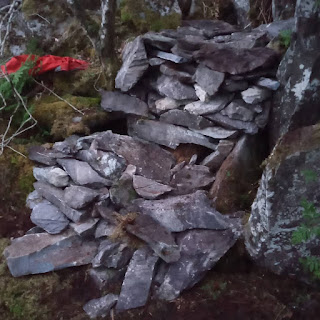 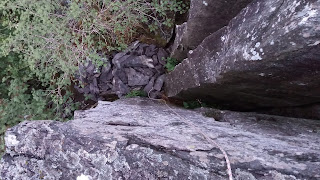 Sooo, the lines we high, but I now had 2 DMM highball pads, and more importantly generous friends. The day before fathers day was lovely and breezy, and my beautiful wife kicked me out to play. After a fair bit cleaning 4 ascents were made:

Encroachment 6A+!
This dolerite pillar took a bit of cleaning as it was at the back of a sort of bay. Despite being a little daunted, the rock was ace and gave me confidence to commit to the moves and get it first go.

Waiting for Vizzini 6C!
Due to the stepped patio this gave me a little concern, but a sea of mats soon solved that. It took very little cleaning but I was unnerved enough to have a try on a grigri before committing. The bottom took a bit of figuring out

Shawshank 5.8 (r)
The squeezes I cleaned by abseiling down with a towel and giving a good rubbing. This was the narrower and dirtier of the squeezes, hence the name.

McClane 5.8 (r)
The left hand squeeze was quite tricky to start. Both squeezes gave flutter moments at the top, but the offwidth grades look weird with a ! So I went with the traditional r rating. You could protect them by someone shoving a mat in sideways once you were high enough. However I was on my own. Both flash ascents.

There's still a few gifts at Craig Ddaear Drwg, notably the overhanging fin left of McClane. All landings will unfortunately require any would be ascentionist to put the time in. (please refrain from disassembling existing patios).