So things are beginning to kick off... 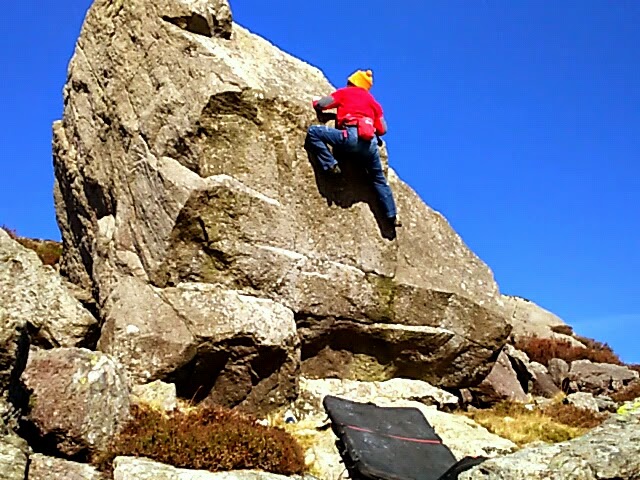 The month kicked off with some throws at tick 7, I think the failure came down to a lack of back up, its so hard to push on on a lone trip like that, once I'm happier with the fall then even the central line might fall, just go to give it some. Its frustrating also that my commitments to work and my beautiful family, meant the next window of opportunity would be the 27th, some three weeks later.

so I schemed and hit the training.. 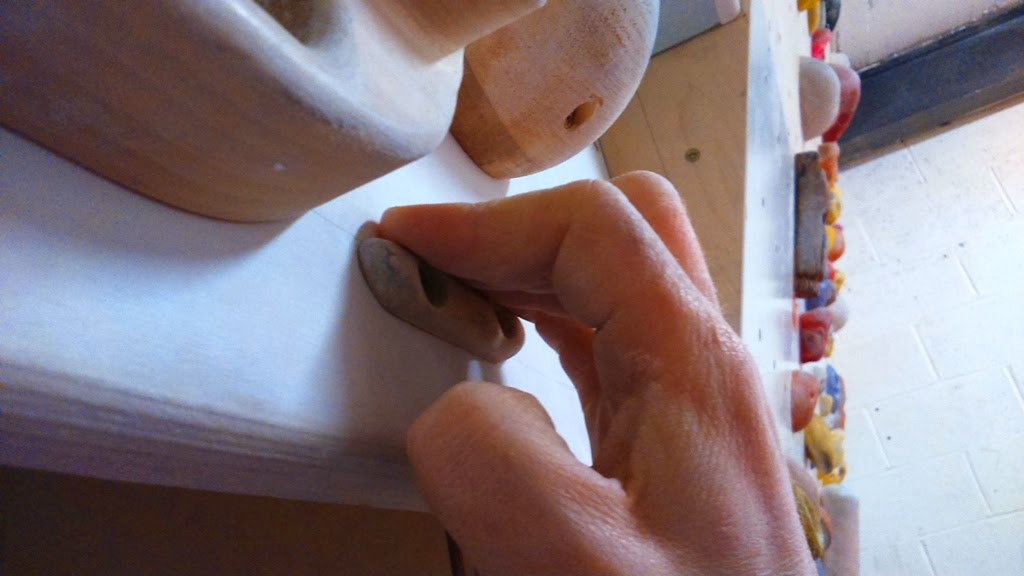 On the slivers. The plan was pull up, drop off times 3, 5 mins rest, repeat three times. So a running warm up, 100 easy moves, three pull ups on the beastmaker 1000 jugs, rest. three on big slots, rest, 2 more sets on reducing sizes, finishing on the beastmaker 2000 small edges. I then surprised myself by cracking out three on the slivers. 5 mins rest. then 4 easily. 5 mins off, then I did 5....
Knocked it on the head, I knew I was going at it like the randy dog I was trying to avoid, but it felt so satisfying. At least i could get a few days rest in before trying again.. 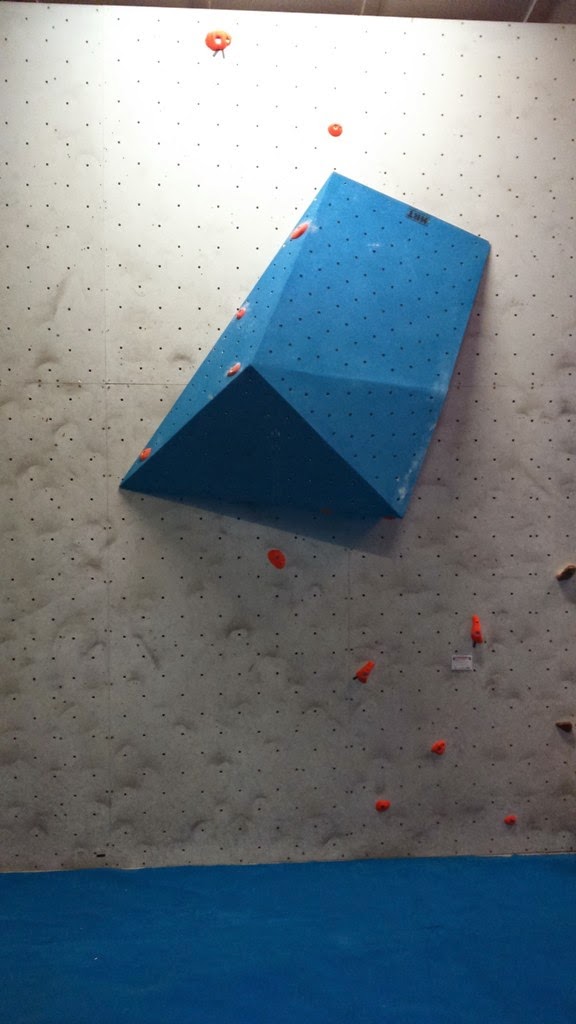 Ooops
I ended up setting this rather fun F7a+ the next day as we needed a cash prize problem, and we wanted to get this sexy volume on the wall. My elbows didn't thank me. Time to hit the bottle. So 3 weeks to get the rehab on the go, my ongoing self repair included a trip to a mighty fine NHS physio to assist in kicking my shoulders into shape. learnt a new exercise as well, and we're targeting an area that may have been originally aggravated by a crucifix into a gaston at Eldon square in '96...

The weeks advanced and the 27th was a sure fire sun trap, then a stormy day with snow, then a cloudy day with drizzle. By the night before, the body didn't ache much, and a posse was forming. Not only that but pad offers were trickling in... 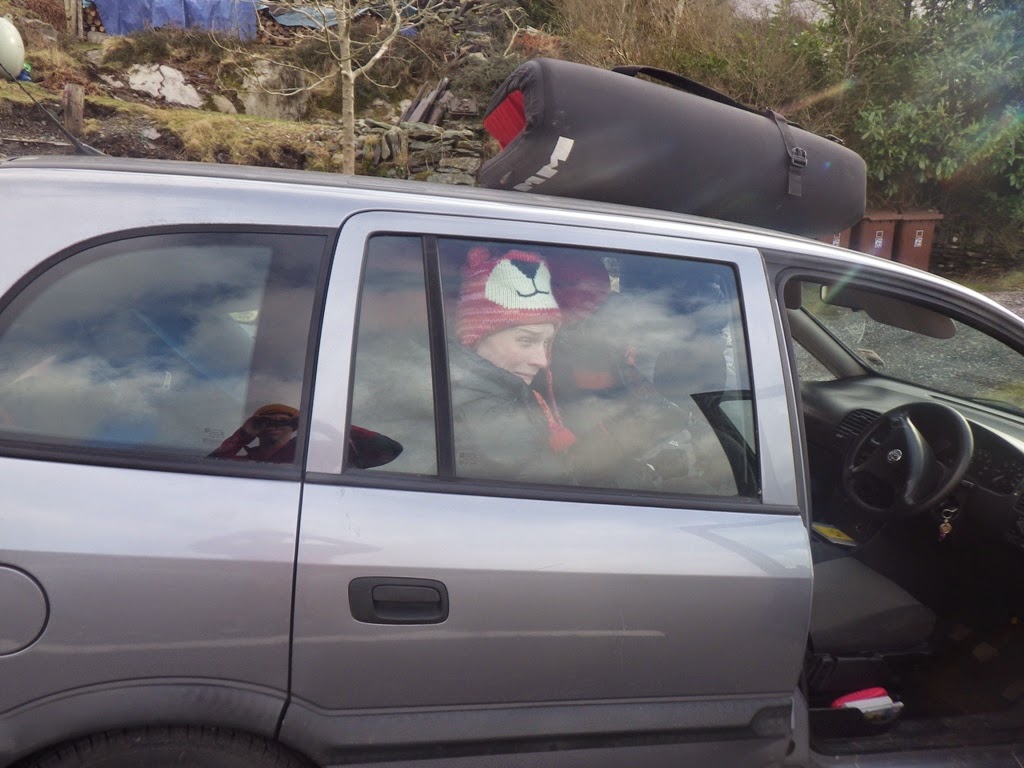 The last pick up, 300m from bus stop. with two spotters and 7 highbll pads already in the car, this one travelled on the roof, with Derw securing it out the window.. 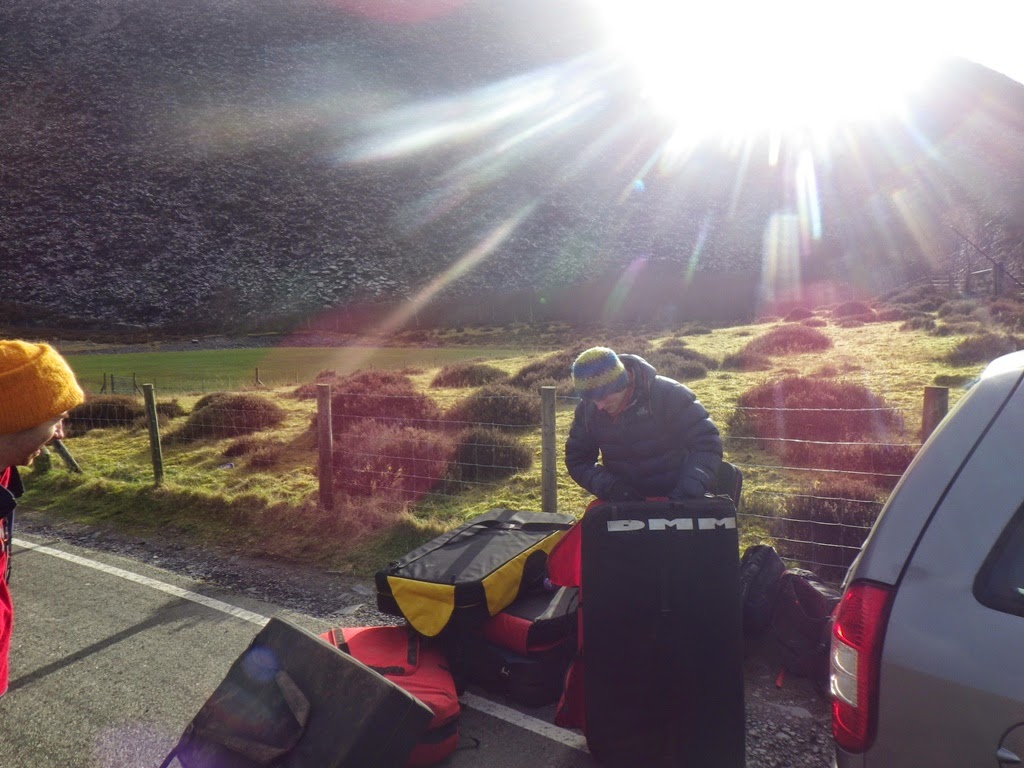 And the sun shone as Derw got us organised... but the walk in was rather comedy, and unfortunately we were too busy stumbling to photo Mark the cuboid snail with three DMM highballs clipped together in a block, and Ben with his leaning hightower of Pod.

First job on arrival was to abb the line and give it some chalk. I spent a lot of time thinking about this over the last month, and given all the tasks I've set myself, and the fact that the wife Forbade me from breaking my legs, meant I was going to give myself some help.
Glad I did because the winter has loosened some of the flakes (the line follows twin crack/seams up the middle of the wall) and rather than being spat off bleeding onto my head, I was able to remove the buggers, and blunt off any knives. Slate can be like that, and while the top got a bit harder, a couple of jugs opened up lower down. It wasn't going to be F7A anymore.. but it would be safe.

We also forgot to photo our warm up antics at Suncharm ledge, where we duly crushed the Escape Groove and Flock of Flying Butt Monkeys, were chastened by Maurice Chevalier, and I also got up the Groove of Smooth... 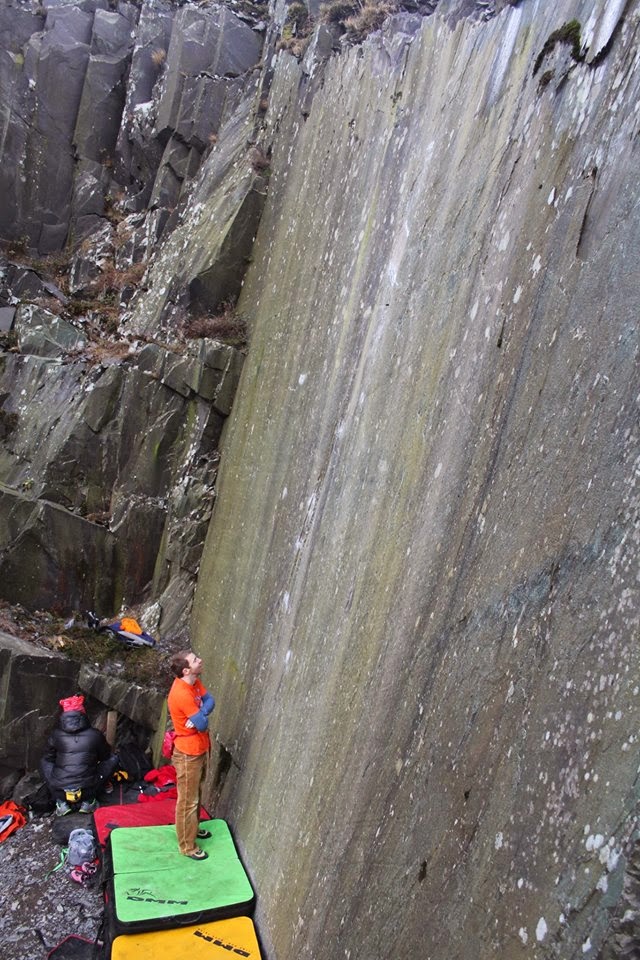 Looking at the line, I like this photo due to the fact it shows the whole route up to the finishing jug rail. 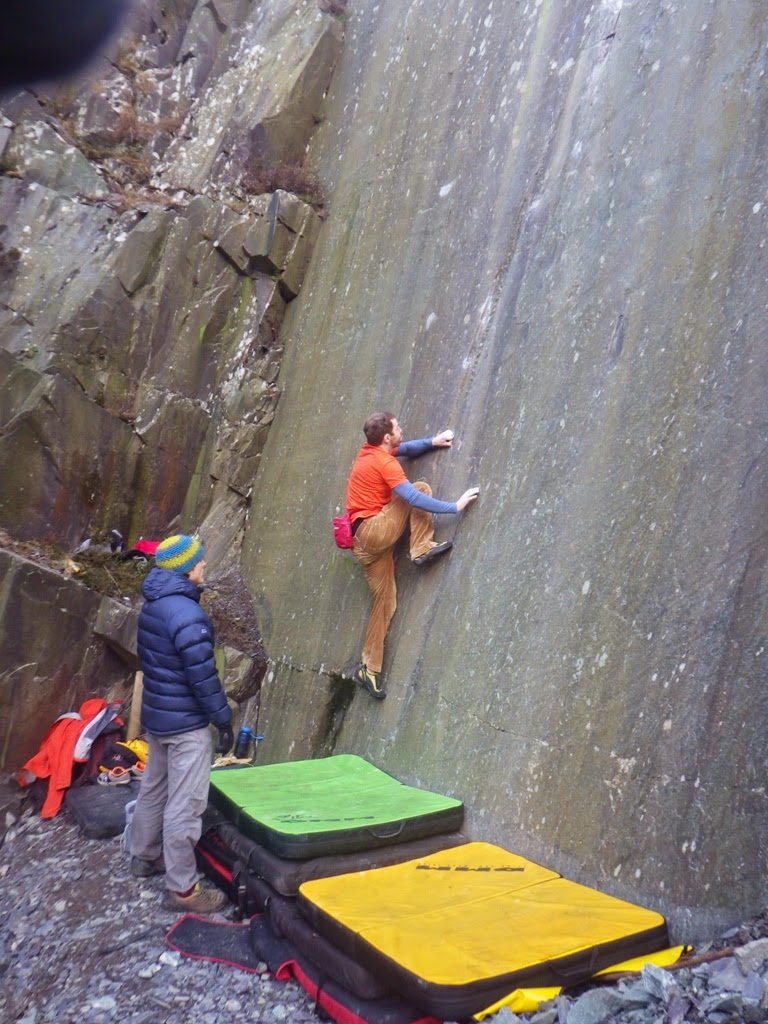 Setting up for what turned out to be the crux, although there's good food for thought in the last two moves... 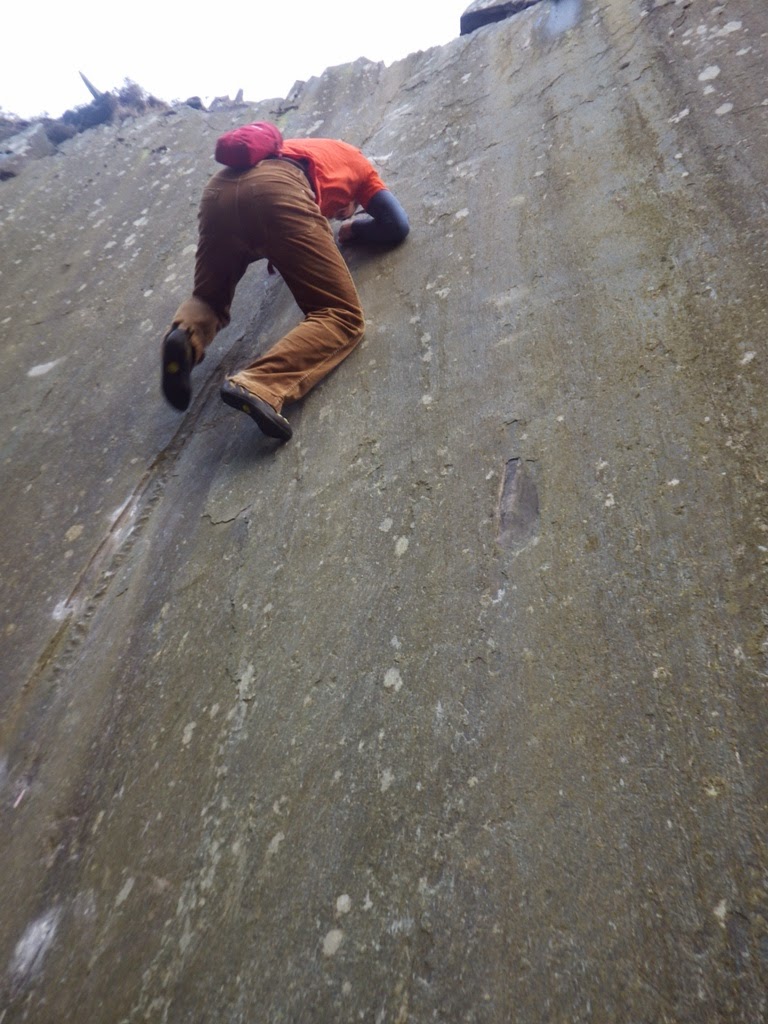 Getting High.
Again the photo is useful as it shows the quality of the slate either side. these are free of the cracks Neverfall follows and will clean up to be nice and hard. You can also see my random chalking up and pink tick marks, slate often only unlocks in the climbing, so I wasn't going to risk a vital hold being overlooked.

OK. Tick; The main tick for me was to get Neverfall done, especially after all that ground work, I was keen for some paydirt. But with all the ticks on the list, there's minor ticks (Frontside arete on tick 7 come to mind), main ticks (Neverfall and Tumbleweed on tick 8) and super ticks.
These would be the lines either side of Neverfall (Derw and Muskrat are super keen), and the front face of the Cube (Gleaning the Cube). I think every tick has its super ticks, ones I'm very happy to hand over, but maybe, just maybe....

Upcoming action for March..
Tides are rubbish on my main days off, but Benllech and tick 5 are definitely on the radar as Ben's psyche rises. Off to Dyffryn Mymbyr next week if the weather's nice so a brace of ticks up there.
and there's also tick 1...
Posted by HoseyB at 15:28 No comments:

So Ben, Derw and myself went and did the Deed Today...

Job one was chalking the line, which went well until I started brushing the holds off. Turns out the winter had loosened some flakes, which in the cause of self preservation, I removed and made right. This deleted the jugs from the top section and added some in the middle. Hard bottom, steady middle, thin top. and a grade reduction, Happy days.

Job two was warm up at Suncharm Ledge. Derw and Ben hadn't played here before, so it was a chance to introduce them to Maurice Chevalier... 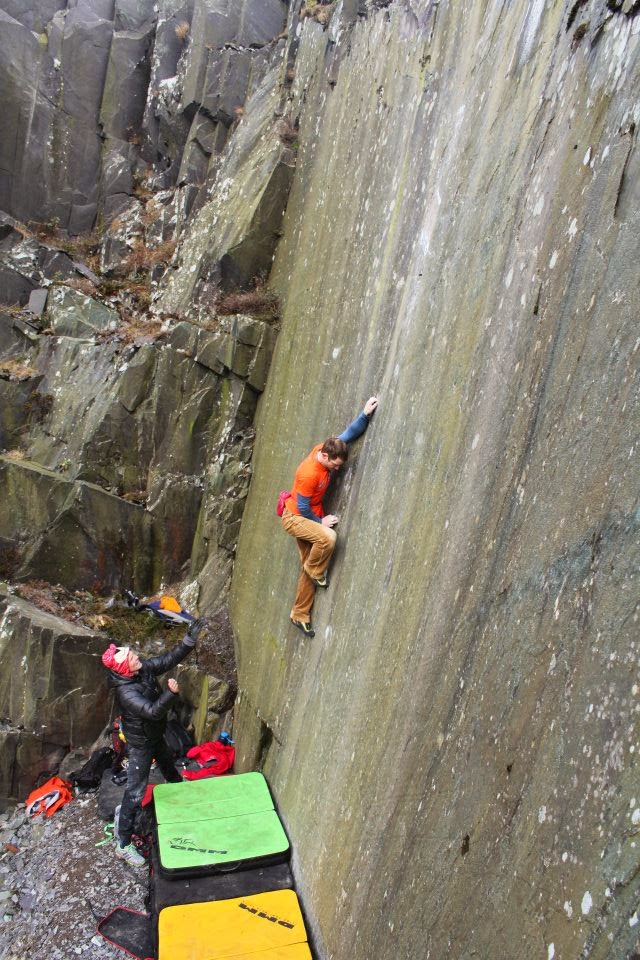 Three strikes and yer off...

Beautiful day today so went up to the cube, on my lonesome (boo hoo)

My plan was to try a snow platform, my lake of shovel didn't put me off... fortunately the remaining snow had hardened and as it had never been trodden on, was easy to peel off the heather in huge chunks. 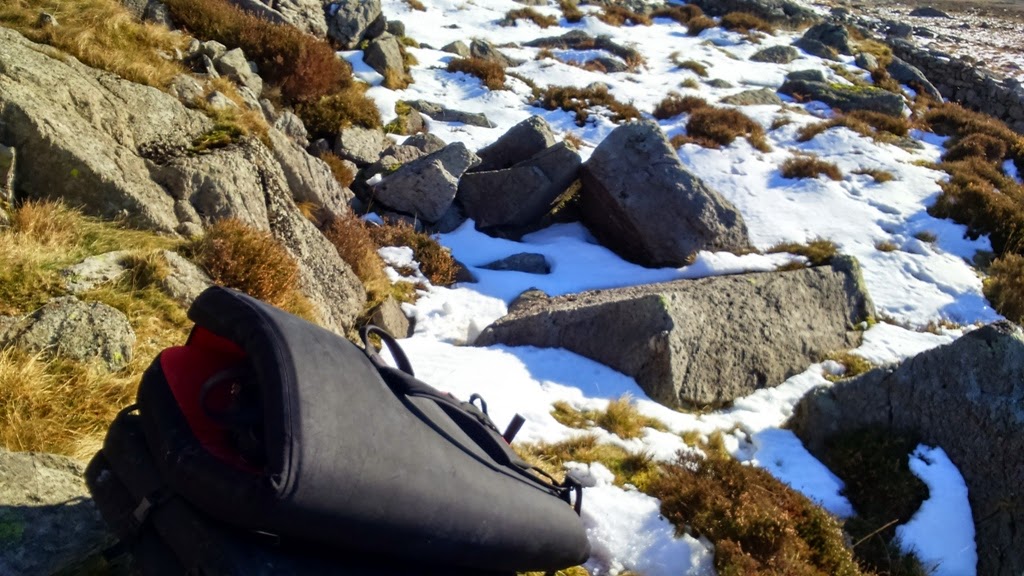 when I arrived the pit was looking ouchy with that big boulder.. 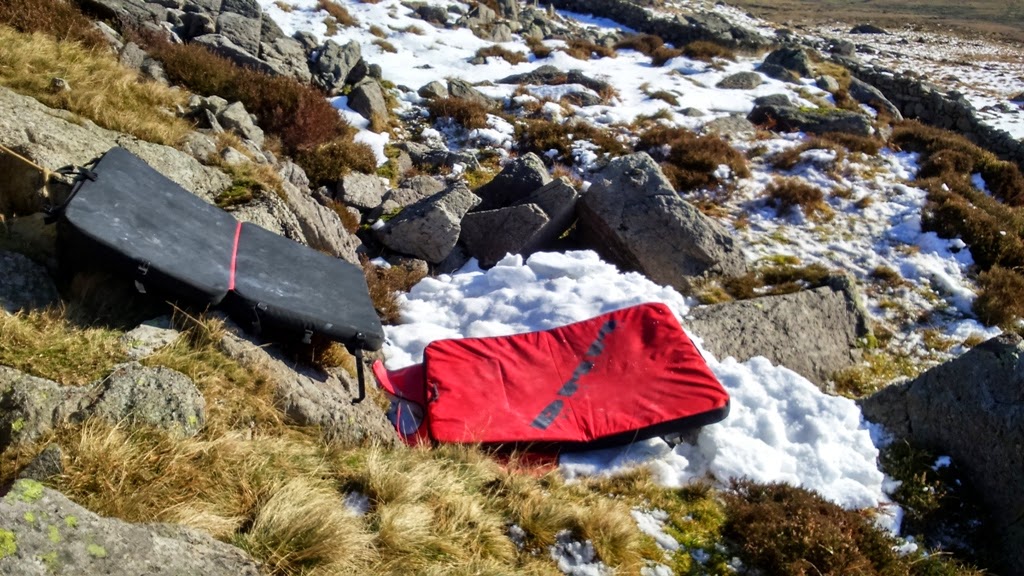 I then started working the Backside Arete project (should that be Goofy Arete?) and it certainly was exciting. No falls but plenty of jumps. Failing due to being too scared is a hard thing to accept, better to back off due to it feeling too difficult to attempt safely. I know, its a fine line.

Here are my last three attempts:

I think I won't be returning without 2 spotters and maybe 4 more mats.. I don't think I can get back up this month anyway, so if anyone wants to make use of my snow platform, be my guest.