Kicking off my Marchlyn Season

So Seren had her 4th birthday party,  with able support / interference from her brothers.  It was hot and windy, and not a little stressful. So when set free, I had to do something..
However all the crags would be sweaty, unless I slogged in the wind and heat up to Marchlyn!
After all this talk of Foolery,  it certainly fitted,  as I was knackered and weak, but rather than settling for a bit of benchmarking on a random rock. I was keen for my first slog up the hill. I always hate it, but, the boulder was soo good,  and maybe I'll get some progress.  I left the scooter at home as I was having brake issues (I melted my wellies)  and the wind may make it dangerous.
It certainly made it arduous.  Being blown this way and that, a QL workout,  and rarely in the right direction. 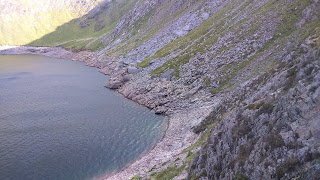 A 50 minute slog took me into the shade and presented me with lots of very dry and windy rock!
My usual warm up circuit took place and the friction was ace. However,  fingers were found wanting a little,  and I struggled to drop into Tumbleweed.  It turned out I was trying to drop into the start holds of the stand(which is nails) rather than the correct sloper. That completed I moved onto Edgehammer which rather than requiring fine tuning,  went down without a whimper.
Taking this as a good sign, Seamus was dispatched and I turned my attention (for the nth time)to the low start project. 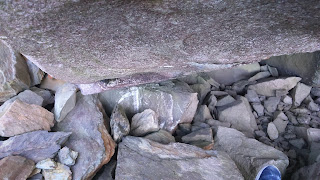 Some time away has somehow allowed me some detachment,  and I felt able to play with the sequence skipping moves to try going big and playing with the energy budget.
This resulted in a much more workable high percentage sequence.  Not only that but I could quantify my deficiencies and see how to nullify them.
Game on!

It may be a tedious poo of a slog, but it's lovely up here. 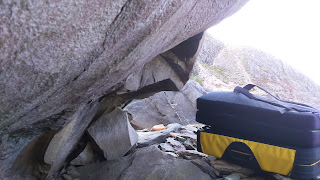