June was a good month, so good in fact, its had to wait until July to Blog about it. Not only that, but I considered delaying further to include shenanigans scheduled for the end of the week.. However, that will have to wait.
Following May's deep recon, and the investigation of Craig y Ecs, I was left a bit frustrated. This was due to events left out of the annals of last month, at the fore mentioned Ecs. Following our great successes on the highball blocs, we went down to a steep boulder near the bottom of the slope. Here I stitched together something rather hard. We were against the clock as we had to punch in at work, and as the last grains of sand were trickling down, I did it! If you could ignore the mighty dab that is...
Crestfallen and with work calling, I had to leave my prize undefended, until the next window of opportunity. What if SteMac caught wind of it?

Fortunately, two weeks later I was able to stomp up and find it still pristine. Following a short pilates warm up and some crimp wrestling I dove in:

The result was "Dutch Trance" named after a Ballboy track that was earworming me at the time. The above vid is split as I tacked on a repeat of the top section for you to see as it isn't all over after the crux.
Particularly memorable was the point mid crux that all pinkies bar one popped off the gaston and I had to dig deep and power through the crux off a mono. Even without this poor beta, its probably F7A. 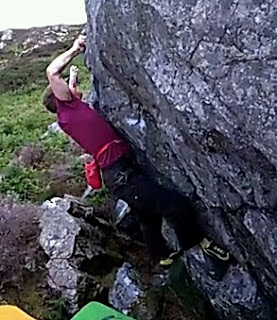 Not content with this honeypot of hits, more recon ensued
Here's Y Fedw, Tremadog's answer to the Lleyn: 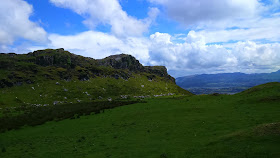 Heres a steep highballish lump of it.. 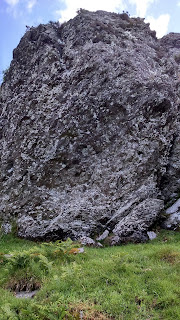 Proper dolerite on the hills behind, but a bit small and grubby 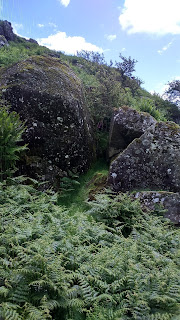 More ventures around the borders of Craig y Ecs 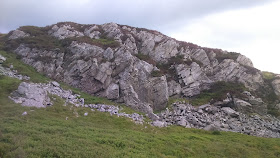 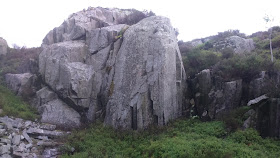 Following a lot of extreme walking, Fathers day occurred and Ethan took me to visit an old nemesis, namely the Tosheroon. I hadn't been here for a couple of years due to fear and flaccidity. I couldn't quite remember what made this project so special. However, it had been the wallpaper for my phone for at least five years, and Ethan (who has caught the climbing bug despite my poor parenting) had decided as it was the one that has evaded me the longest that A) it must be hard, and therefore he should beat me to it, and B) as it was Fathers day and everybody else was on their tablets we should go. I should state at this point it had nothing to do with the tides being perfect and my climbing partner having to let me down due to latent zombie-ism. 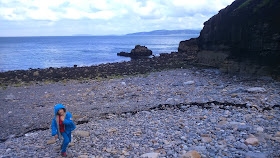 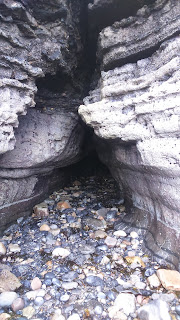 The pebble level felt about a foot higher than my 2015 visit, This made it feel almost welcoming. We ventured further in , and fount the pebbles didn't ramp up too much, in fact the starting point (a Chckstone 40ft into the depths) still had the same small boulder below. 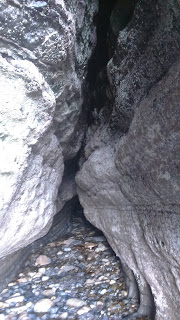 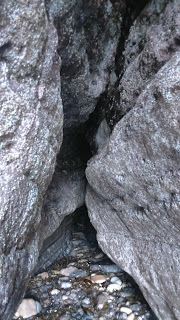 The crux section I've yet to breach 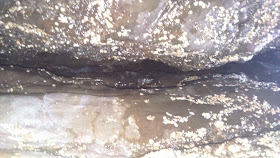 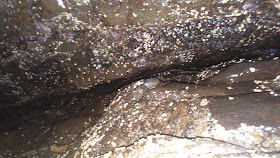 The jams through the crux are always wet and therefore dependant on what little constrictions you can find amongst the flareness.

I remembered why It ensnared me so, the technicality and novel nature of the climbing. If offwidth climbing involves Scarpelli's "Intelligent Brutality" Then imagine a wet one covered in crumbly barnacles!

I asked Ethan he minded loitering while I had a quick go , and he offered to be cameraman (good lad). 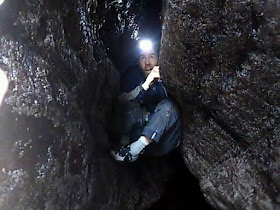 Heres a little video which may explain why this project is ace:


I left without the tick, but I reached my previous highpoint. I was impressed that I reached this point without entering the Heart of Darkness like last time. I'm certainly not fitter, so I can only put it down to the last 3 years of pilates giving me a more efficient core and lower body for extended knee barring 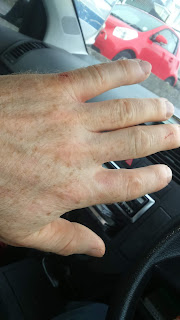 The sum total of my owies.

This month has definitely seen a return to form for myself in terms of simply being me. I'm getting out, climbing random stuff with some respectable difficulty, and also this month I've seen some of my giveaways bearing fruit. I'd nagged Dan McManus about Nant Gwrtheyrn's DWS potential and Finally he must have got fed up because he dragged Pete Robins along and they bagged it all. 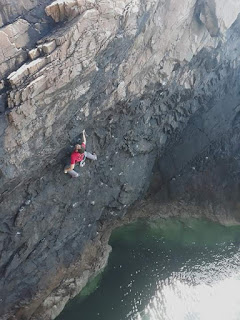 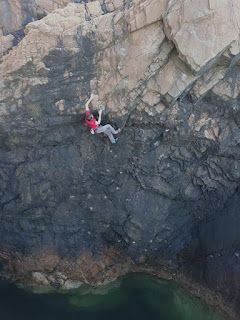 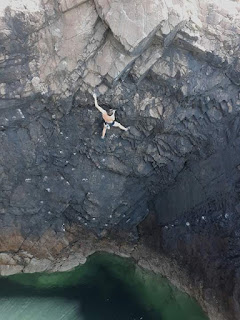 This ones apparently 7b+. However, the last DWS Dan put up at this grade (well he originally said 7b) was White Lightning at Rhoscolyn, and I remember seeing Caff fall off that. The Picture is of Pete in his underpants. He fell off snapping a foothold shortly afterward.

Part of this return to form is having a surplus of projects. So here's one at Clogwyn Melyn, 10 minutes above the Watkin Path, 15 minutes from Caffi Gwynant's fine cakes.
There's a couple of scrappy bluffs which the Crook may have beaten you to, but there's one or two boulders too. 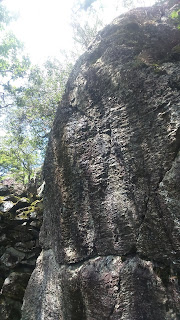 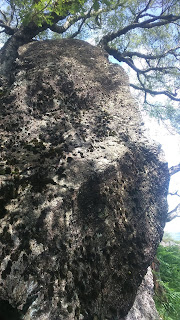 As I looked out towards Moel Meirch I am content Knowing...

There is Treasure Everywhere 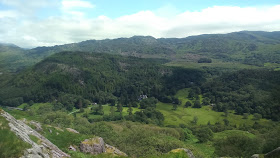